Frederick Douglass escaped from slavery in 1838 and, to elude capture, changed his surname from Bailey to Johnson and then to Douglass, after a character in Walter Scott’s poem “The Lady of the Lake.” Douglass spoke at an antislavery convention in Nantucket in 1841. His speech was so well received that he became an agent for the Massachusetts Anti-Slavery Society. Douglass published his first autobiography, Narrative of the Life of Frederick Douglass, in 1845, in part to silence skeptics who claimed that no ex-slave could be so articulate. Abraham Lincoln praised him as the “most meritorious man of the nineteenth century.” 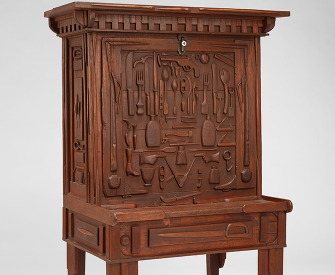 What the Constitution means to Frederick Douglass.More

The Truth Is Marching On

Frederick Douglass remembers the soldiers who died to end slavery.More

“The difference between us is very marked,” wrote Frederick Douglass to Harriet Tubman in 1868. “Most that I have done and suffered in the service of our cause has been in public, and I have received much encouragement at every step of the way. You, on the other hand, have labored in a private way. I have wrought in the day—you in the night.”

Have the people mistaken the requirements of their own Constitution?More

Let us have peace, but let us have liberty, law, and justice first.

It is not light that we need, but fire; it is not the gentle shower, but thunder. We need the storm, the whirlwind, and the earthquake.

Frederick Douglass compares the food of slaves with that of their masters.More

Answering to the Charge of Infidelity

What, to the American slave, is your Fourth of July? I answer: a day that reveals to him, more than all other days in the year, the gross injustice and cruelty to which he is the constant victim. To him your celebration is a sham.

“The holidays are part and parcel of the gross fraud, wrong, and inhumanity of slavery.”More