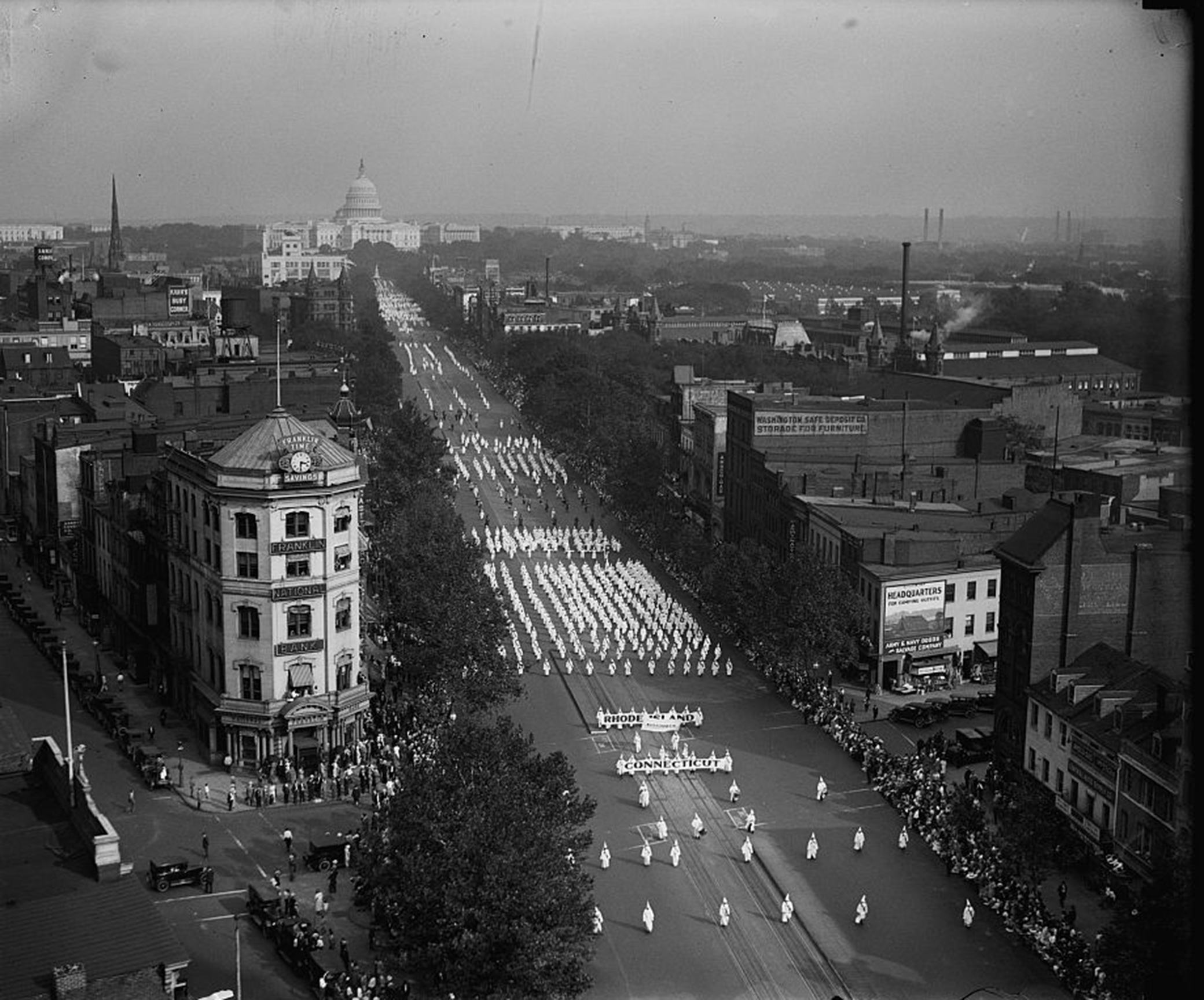 This week’s selection comes from Linda Gordon, author of The Second Coming of the KKK: The Ku Klux Klan of the 1920s and the American Political Tradition. 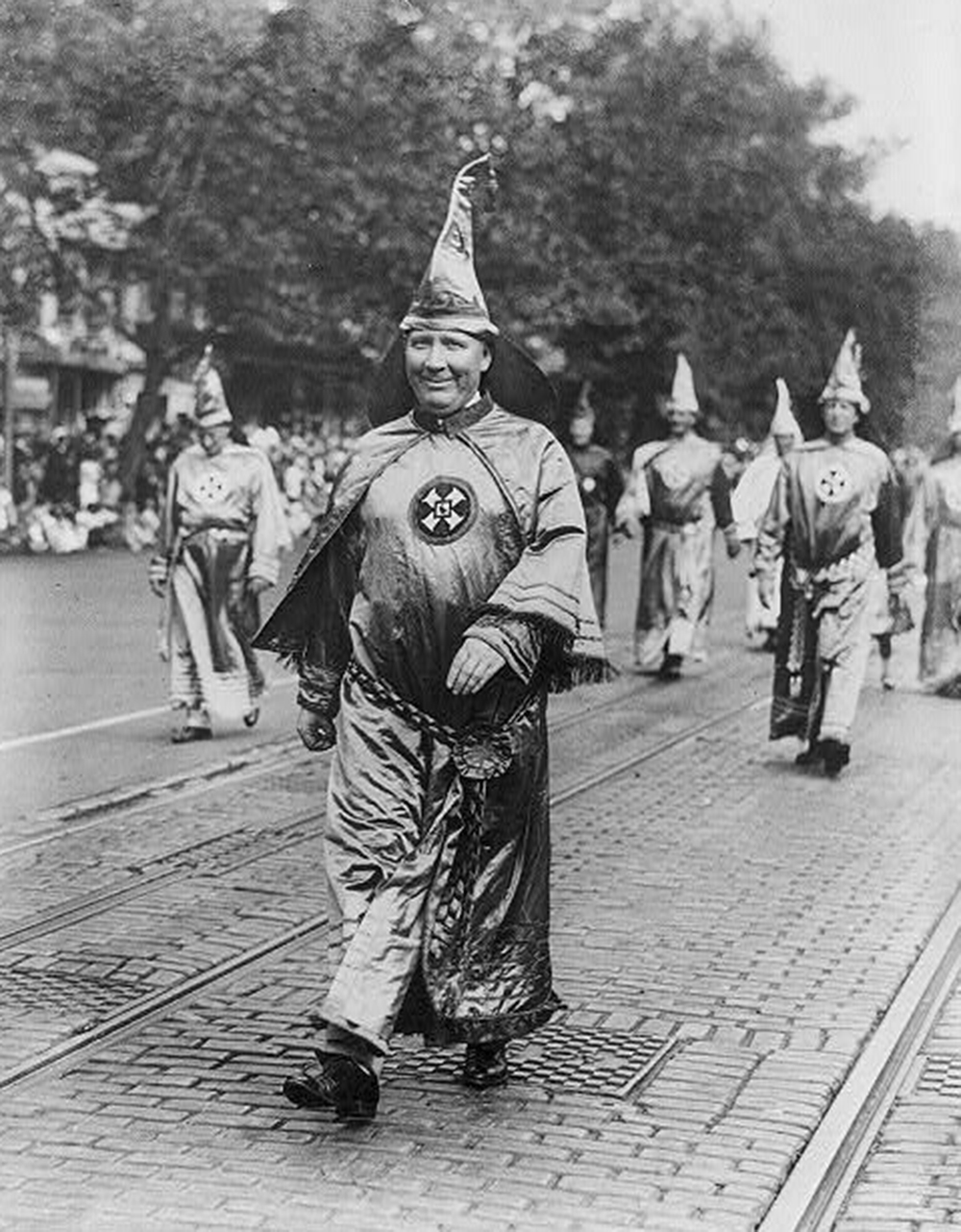 The Ku Klux Klan of the 1920s, known as the second Klan, was a mass movement, claiming some three to six million members. To understand it, one has to shed much of our images of the KKK. The first Klan was a violent terrorist organization, in the literal meaning of terrorist—that is, its goal was not only to punish individual African Americans but to intimidate the whole African American population from making any attempt to protest or to strive for economic improvement. It operated in the South, it conducted some four thousand lynchings, and it was allegedly secret—although in many communities whites knew who were members. The second Klan assumed the trappings of the first, notably its robes and masks, and continued its unremitting racism toward people of color, but it differed it important ways: it recruited publicly, held festivals open to the public, and spread across the northern and western states. It advertised in newspapers, fielded semipro baseball teams, included a women’s auxiliary with some 1.5 million members, and established clubs for children in order to instill Klan values and groom future members. Its critics like to label it a group of uneducated, backward rural hicks, but it was nothing of the sort—it was strongest in the cities, and its members were typically solidly middle-class, at least as well educated as the general population. Nationwide it produced some 150 print publications and deployed the newest technology—radio stations, a recording company, and a film company; its grand-scale outdoor gatherings sometimes featured stuntmen performing on the wings of low-flying airplanes. It elected eleven governors; forty-five congressmen; and hundreds of state, county, and municipal officials.

The second Klan grew to such power through a brilliant strategy: it added Catholics and Jews to its enemies list, expanding the bigotry from race into religion and building on fear of immigrants. The Klan then used this bigotry to define its purpose as ultrapatriotic; it labeled white Protestants as the only “true” Americans and proclaimed itself as sent by God to rescue America from those who were undermining its destiny. These prejudices were not new. For decades prior to the second Klan’s emergence, nativist groups had articulated the same hostilities, and many Americans, including political and intellectual elites, shared in this assertion of white Protestant superiority. But the Klan intensified the virulence of this anger, and its biggest influence was in spreading that bigotry and making it a reputable, patriotic belief system, one dedicated to making America great again.

One sign of the Klan success in claiming respectability is that a distinguished American literary magazine, The North American Review, founded in 1815 by Nathan Hale, published an article by the Klan boss, Imperial Wizard Hiram Evans. (The magazine published work by Henry James, Henry Adams, Daniel Webster, William Cullen Bryant, and many other figures of high-toned American letters.) His article, “The Klan’s Fight for Americanism,” excerpted here, appeared there in 1926.

When the Klan first appeared the nation was…disorganized and helpless before the invasion of aliens and alien ideas…The most menacing and most difficult problem facing America today is this of the permanently unassimilable alien. The only solution so far offered is that of Dr. Eliot, president emeritus of Harvard. After admitting that the melting pot has failed—thus supporting the primary position of the Klan!—he adds that there is no hope of creating here a single, homogeneous race-stock of the kind necessary for national unity.

Except for a few lonesome voices, almost drowned by the clamor of the alien and the alien-minded “Liberal,” the Klan alone faces the invader…The Klan, therefore, has now come to speak for the great mass of Americans of the old pioneer stock…To understand the Klan, then, it is necessary to understand the character and present mind of the mass of old-stock Americans. The mass, it must be remembered, as distinguished from the intellectually mongrelized “Liberals.”

<…the new Nordic blend which became the American race was bred up to a point probably the highest in history…within a few years we should be supplanted by the “mere force of breeding” of the low standard peoples…the melting pot was a ghastly failure, and remembered that the very name was coined by…the Jews…With the present birthrate, the Nordic stock will have become a hopeless minority within fifty years…The white race must be supreme, not only in America but in the world…The colored races today, such as Japan, are clamoring not for equality but for their supremacy.

The real indictment against the Roman Church is that it is, fundamentally and irredeemably, in its leadership, in politics, in thought, and largely in membership, actually and actively Alien, un-American and usually anti-American…The facts are that almost everywhere, and especially in the great industrial centers where the Catholics are strongest, they vote almost as a unity, under control of leaders of their own faith, always in support of the interests of the Catholic Church and of Catholic candidates without regard to other interests, and always also in support of alienism when there is an issue raise. On many occasions they form alliances with other alien blocs against American interests, as with the Jews in New York today…Jews or Catholics are lavish with their caustic criticism of anything American. Nothing is immune; our great men, our historical struggles and sacrifices, our customs and personal traits, our “Puritan consciences”—all have been sacrificed without mercy. At the least criticism of these same vitriolic critics or of their people brings howls of “anti-Semitic” or “anti-Catholic”…

…we of the Klan admit that we are intolerant and narrow in a certain sense. We do not think our intolerance is so serious as that of our enemies. It is not an intolerance that tries to prevent free speech or free assembly. The Klan has never broken up a meeting, nor tried to drive a speaker to cover, nor started a riot, nor attacked a procession or parade, nor murdered men for belong to the Knights of Columbus or the B’nai B’rith…We are intolerance of everything that strikes at the foundations of our race, our country or our freedom of worship. We are narrowly opposed to the use of anything alien—race, loyalty to any foreign power or to any religion whatever—as a means to win political power.

Thus the Klan goes back to the American racial instincts, and to the common sense which is their first product, as the basis of its beliefs and mothers … we know that we are right in the same sense that a good Christian knows that he has been saved and that Christ lives—a think which the intellectual can never understand…These are the instincts of loyalty to the white race, to the traditions of America, and to the spirit of Protestantism, which has been an essential part of Americanism ever since the days of Roanoke and Plymouth Rock. They are condensed into the Klan slogan: “Native, white Protestant supremacy”…Let me by clear what is meant by “supremacy”. It is nothing more than power of control, under just laws. It is not imperialism, far less is it autocracy or even aristocracy of a race or stock of men. What it does mean is that we insist on our inherited right to insure our own safety, individually and as a race, to secure the future of our children…

Further, the Klan wishes to restore the Bible to the school, not only because it is part of the world’s great heritage in literature and philosophy and has profoundly influenced all white civilization, but because it is the basis on which all Christian religions are built, and to which they must look for their authority, The Klan believes in the right of each child to pass for itself on the ultimate authority behind the creed he is asked to adopt; it believes in preserving to all children their right to religious volition, to full freedom of choice. This is impossible if they are barred from the Bible. This is one of the reasons for the Klan’s objection to parochial schools of any church. They very readily become mere agencies of propaganda. Another reason is that in many the teaching is in the hands of aliens, who cannot possibly understand Americanism or train Americans to citizenship…

The Negro, the Klan considers a special duty and problem of the white American. He is among us through no wish of his; we owe it to him and to ourselves to give him full protection and opportunity. But his limitations are evident; we will not permit him to gain sufficient power to control our civilization. Neither will we delude him with promises of social equality which we know can never be realized. The Klan looks forward to the day when the Negro problem will have been solved on some much sanger basis than miscegenation, and when every State will enforce laws making any sex relations between a white and a colored person a crime.

The Jew is a more complex problem. His abilities are great, he contributes much to any country where he lives. This is particularly true of the Western Jew, those of the stocks we have known for so long…. We may hope that shortly, in the free atmosphere of American, Jews of this class will cease to be a problem. Quite different are the Eastern Jews of recent immigration, the Jews known as the Askhenasim. It is interesting to note that anthropologists now tell us that these are not true Jews, but only Judaized Mongols—Chazars. These, unless the true Hebrew, show a divergence from the American type so great that there seems little hope of their assimilation. 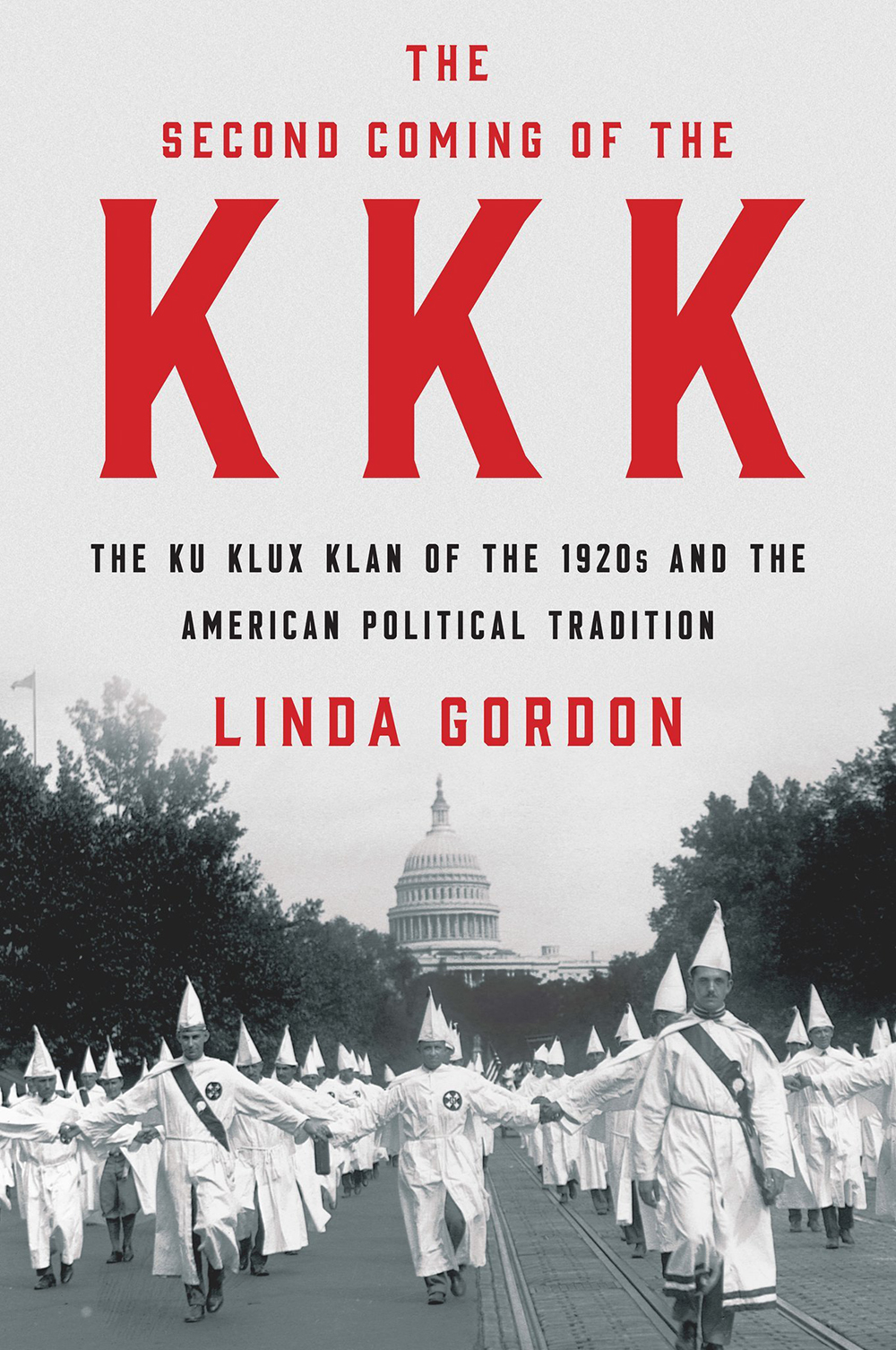 • Fiona Sampson, author of In Search of Mary Shelley: The Girl Who Wrote Frankenstein

Linda Gordon, winner of two Bancroft Prizes and the Los Angeles Times Book Prize, is the author of The Second Coming of the KKK, Dorothea Lange, and Impounded and the coauthor of Feminism Unfinished. She is the Florence Kelley Professor of History at New York University and lives in New York and Madison, Wisconsin.