Little is known about the life of Lucretius: Saint Jerome claimed that he was driven insane by a love potion and committed suicide. His poem On the Nature of Things reveals its author to have been a religious skeptic who rejected the notion of an afterlife and believed that the world was composed of invisible particles. For centuries Lucretius’s sole work was considered lost until a book hunter named Poggio Bracciolini happened upon a copy in a German monastery in 1417; it later influenced Niccolò Machiavelli, Michel de Montaigne, and Thomas Jefferson. 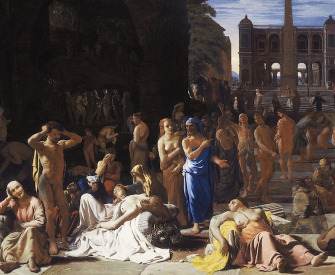 The Nature of Plagues

Nature resolves everything into its component elements, but annihilates nothing.

A look at Lucretius’ universe.More

What is food to one is to others bitter poison.

Some four hundred years after the death of Lucretius, Saint Jerome wrote the only existing biography of the philosopher, in two sentences, suggesting that Lucretius “was rendered insane by a love potion” and killed himself. In 1868 Alfred, Lord Tennyson wrote in “Lucretius” that the philosopher’s wife “dreaming some rival, sought and found a witch / Who brewed the philter which had power, they said, / To lead an errant passion home again. / And this, at times, she mingled with his drink, / And this destroyed him.”

Nothing from nothing ever yet was born.

Never trust her at any time when the calm sea shows her false alluring smile.