During the time that he was composing The Decameron, Giovanni Boccaccio performed various duties for the Florentine republic, among them delivering a sum of money to Dante’s daughter—a nun in Ravenna—in 1350. That same year he met for the first time Petrarch, nine years his senior, with whom he maintained an extensive correspondence. Their English contemporary Geoffrey Chaucer drew inspiration from some of Boccaccio’s early works for Troilus and Criseyde and for parts of The Canterbury Tales. 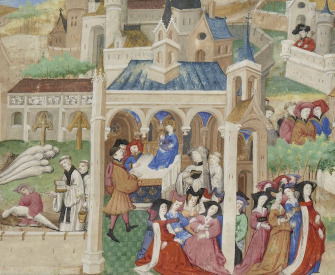