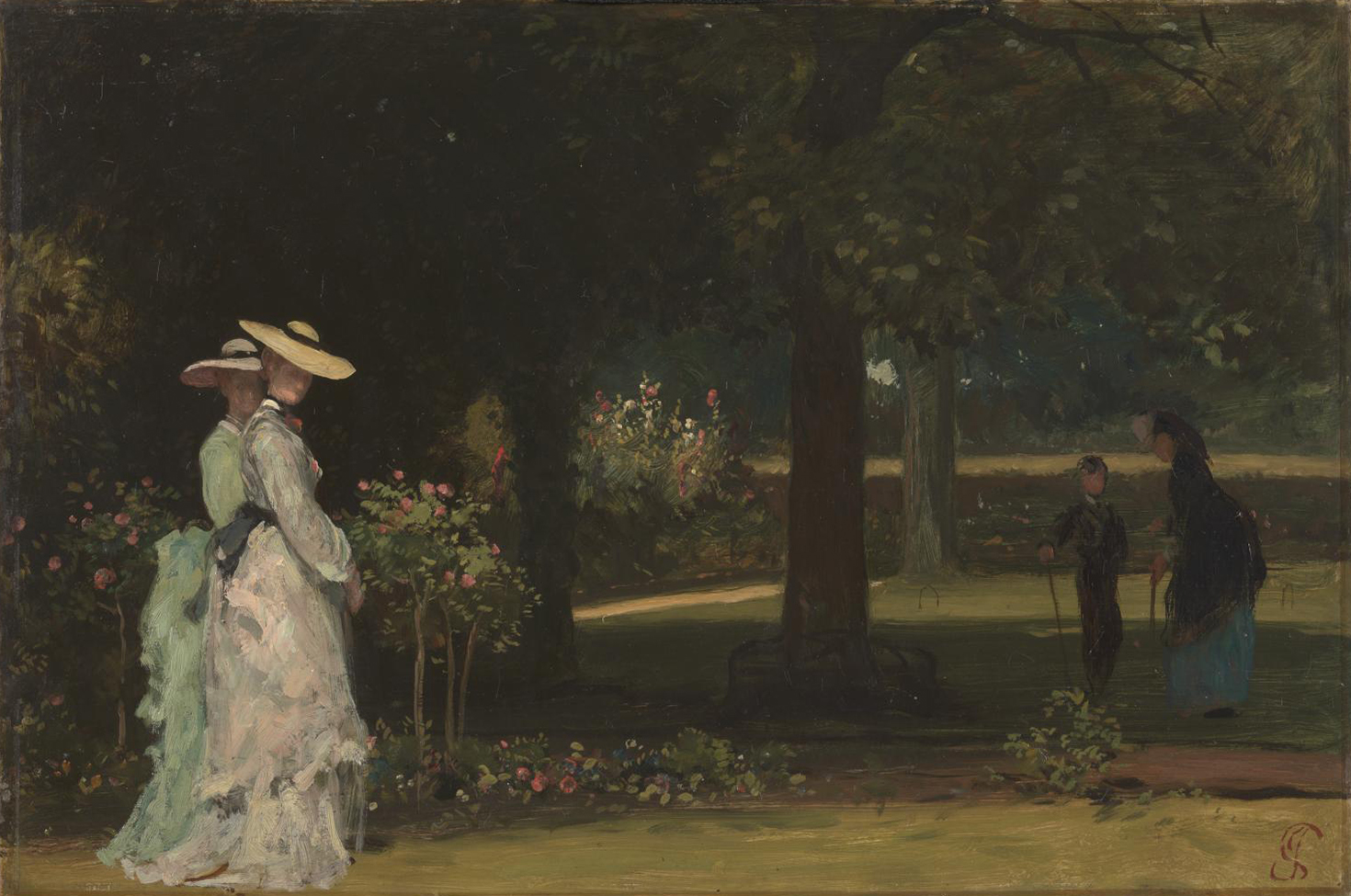 As a teenager, Virginia Woolf took up binding books in her free time. In 1917, five years after marrying the writer Leonard Woolf, she and her husband took the next step toward becoming publishers: purchasing a printing press. In May 1919 Hogarth Press, named after the Woolfs’ home in Richmond, released Virginia’s Kew Gardens, with illustrations by her sister Vanessa Bell. Woolf typeset and printed the story by hand; it was the first time she self-published a book that featured her writing alone. The narrative captures fragments of conversation and musings from walkers passing by a flower bed on a hot July day. Kew Gardens was slow to sell, and Woolf’s anxiety about her new story grew after Bell criticized the quality of her and Leonard’s printing during a June visit to Charleston, Bell’s country home in Sussex. When Woolf returned to London, she found a pile of mail waiting; in her absence over one hundred new orders for Kew Gardens had arrived. On May 29 an unsigned review of Kew Gardens (now attributed to critic Harold Child) appeared in the Times Literary Supplement. Child praised Woolf for taking what he considered to be the mundane topic of “some stupid people” wandering in a garden and creating “a thing of original and therefore strange beauty, with its own ‘atmosphere,’ its own vital force.”

Country houses like Charleston were cherished wartime retreats for Woolf and other members of the Bloomsbury Group, a circle of nonconformist artists and intellectuals that included E.M. Forster and John Maynard Keynes. In August 1917 Bloomsbury patroness Lady Ottoline Morrell begged Woolf to visit Garsington Manor, Morell’s home in Oxfordshire: “Do consult with [Leonard]—& let me know if you could manage it—the garden is full of flowers too—entangled & untidy & multicolored & my heart is very full of all sorts of wonderful feelings for you—entangled—but not untidy.” Literary scholar Karina Jakubowicz notes that during the summer and autumn of 1917 Woolf, Morell, and writer Katherine Mansfield all spent time at Garsington and sent each other descriptions of guests walking and talking in the garden. Although Woolf set Kew Gardens in a public park, not a private home, Jakubowicz suggests one source of inspiration for Woolf’s free-flowing narrative was conversations with Morrell and Mansfield about Garsington. In a letter to Morrell in August 1917, Woolf alluded to the imaginative appeal of Morrell’s garden for the trio: “Katherine Mansfield describes your garden, the rose leaves drying in the sun, the pool, and long conversations between people wandering up and down in the moonlight. It calls out her romantic side.” 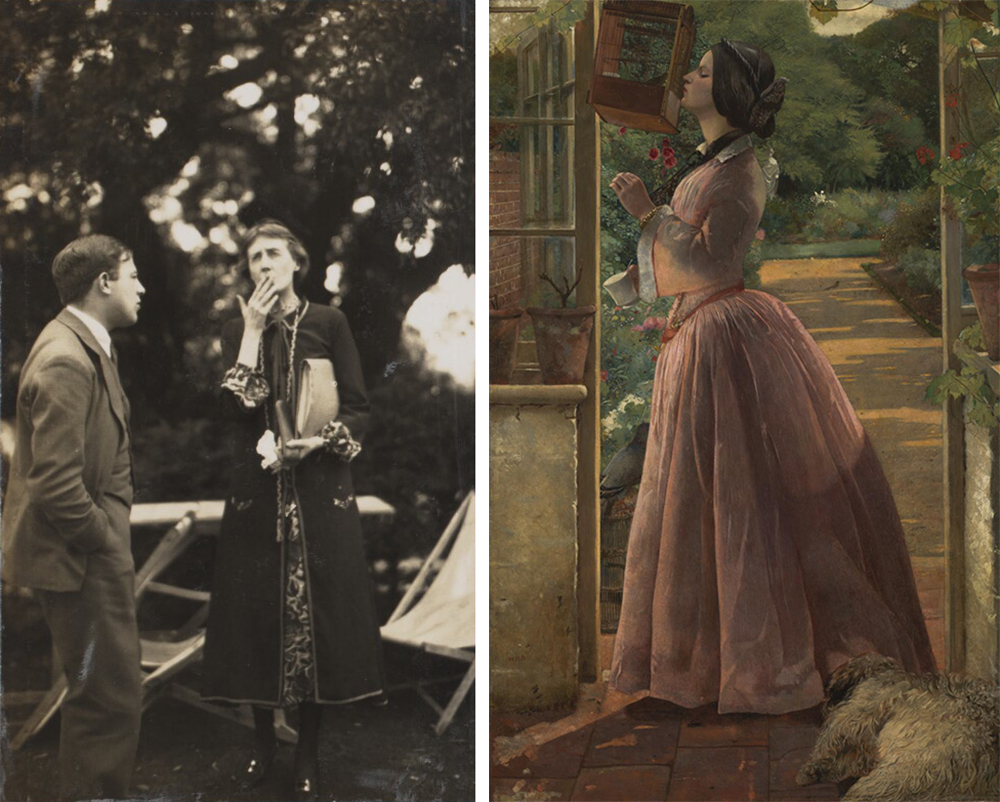 From the oval-shaped flower bed there rose perhaps a hundred stalks spreading into heart-shaped or tongue-shaped leaves halfway up and unfurling at the tip red or blue or yellow petals marked with spots of color raised upon the surface; and from the red, blue, or yellow gloom of the throat emerged a straight bar, rough with gold dust and slightly clubbed at the end. The petals were voluminous enough to be stirred by the summer breeze, and when they moved, the red, blue, and yellow lights passed one over the other, staining an inch of the brown earth beneath with a spot of the most intricate color. The light fell either upon the smooth, gray back of a pebble, or the shell of a snail with its brown, circular veins, or falling into a raindrop, it expanded with such intensity of red, blue, and yellow the thin walls of water that one expected them to burst and disappear. Instead, the drop was left in a second silver gray once more, and the light now settled upon the flesh of a leaf, revealing the branching thread of fiber beneath the surface, and again it moved on and spread its illumination in the vast green spaces beneath the dome of the heart-shaped and tongue-shaped leaves. Then the breeze stirred rather more briskly overhead and the color was flashed into the air above, into the eyes of the men and women who walk in Kew Gardens in July.

The figures of these men and women straggled past the flower bed with a curiously irregular movement not unlike that of the white and blue butterflies who crossed the turf in zigzag flights from bed to bed. The man was about six inches in front of the woman, strolling carelessly, while she bore on with greater purpose, only turning her head now and then to see that the children were not too far behind. The man kept this distance in front of the woman purposely, though perhaps unconsciously, for he wished to go on with his thoughts.

“Fifteen years ago I came here with Lily,” he thought. “We sat somewhere over there by a lake and I begged her to marry me all through the hot afternoon. How the dragonfly kept circling around us: how clearly I see the dragonfly and her shoe with the square silver buckle at the toe. All the time I spoke I saw her shoe and when it moved impatiently I knew without looking up what she was going to say: the whole of her seemed to be in her shoe. And my love, my desire, were in the dragonfly; for some reason I thought that if it settled there, on that leaf, the broad one with the red flower in the middle of it, if the dragonfly settled on the leaf she would say ‘Yes’ at once. But the dragonfly went around and around: it never settled anywhere—of course not, happily not, or I shouldn’t be walking here with Eleanor and the children—Tell me, Eleanor. D’you ever think of the past?”

“For me, a square silver shoe buckle and a dragonfly—”

"For me, a kiss. Imagine six little girls sitting before their easels twenty years ago, down by the side of a lake, painting the water lilies, the first red water lilies I’d ever seen. And suddenly a kiss, there on the back of my neck. And my hand shook all the afternoon so that I couldn’t paint. I took out my watch and marked the hour when I would allow myself to think of the kiss for five minutes only—it was so precious—the kiss of an old gray-haired woman with a wart on her nose, the mother of all my kisses all my life. Come, Caroline, come, Hubert.”

They walked on the past the flower bed, now walking four abreast, and soon diminished in size among the trees and looked half-transparent as the sunlight and shade swam over their backs in large trembling irregular patches.

In the oval flower bed the snail, whose shell had been stained red, blue, and yellow for the space of two minutes or so, now appeared to be moving very slightly in its shell, and next began to labor over the crumbs of loose earth which broke away and rolled down as it passed over them. It appeared to have a definite goal in front of it, differing in this respect from the singular high-stepping angular green insect who attempted to cross in front of it, and waited for a second with its antenna trembling as if in deliberation, and then stepped off as rapidly and strangely in the opposite direction. Brown cliffs with deep green lakes in the hollows, flat, blade-like trees that waved from root to tip, round boulders of gray stone, vast crumpled surfaces of a thin crackling texture—all these objects lay across the snail’s progress between one stalk and another to his goal. Before he had decided whether to circumvent the arched tent of a dead leaf or to breast it there came past the bed the feet of other human beings.

This time they were both men. The younger of the two wore an expression of perhaps unnatural calm; he raised his eyes and fixed them very steadily in front of him while his companion spoke, and directly his companion had done speaking he looked on the ground again and sometimes opened his lips only after a long pause and sometimes did not open them at all. The elder man had a curiously uneven and shaky method of walking, jerking his hand forward and throwing up his head abruptly, rather in the manner of an impatient carriage horse tired of waiting outside a house; but in the man these gestures were irresolute and pointless. He talked almost incessantly; he smiled to himself and again began to talk, as if the smile had been an answer. He was talking about spirits—the spirits of the dead, who, according to him, were even now telling him all sorts of odd things about their experiences in Heaven.

“Heaven was known to the ancients as Thessaly, William, and now, with this war, the spirit matter is rolling between the hills like thunder.” He paused, seemed to listen, smiled, jerked his head, and continued: “You have a small electric battery and a piece of rubber to insulate the wire—isolate?—insulate?—well, we’ll skip the details, no good going into details that wouldn’t be understood—and in short the little machine stands in any convenient position by the head of the bed, we will say, on a neat mahogany stand. All arrangements being properly fixed by workmen under my direction, the widow applies her ear and summons the spirit by sign as agreed. Women! Widows! Women in black—”

Here he seemed to have caught sight of a woman’s dress in the distance, which in the shade looked a purple black. He took off his hat, placed his hand upon his heart, and hurried toward her muttering and gesticulating feverishly. But William caught him by the sleeve and touched a flower with the tip of his walking stick in order to divert the old man’s attention. After looking at it for a moment in some confusion the old man bent his ear to it and seemed to answer a voice speaking from it, for he began talking about the forests of Uruguay, which he had visited hundreds of years ago in company with the most beautiful young woman in Europe. He could be heard murmuring about forests of Uruguay blanketed with the wax petals of tropical roses, nightingales, sea beaches, mermaids, and women drowned at sea, as he suffered himself to be moved on by William, upon whose face the look of stoical patience grew slowly deeper and deeper.

In 1917 Virginia and Leonard Woolf created Hogarth Press, which later printed Prelude by Katherine Mansfield and Poems by T.S. Eliot; their Bloomsbury home became a meeting place for, among others, E.M. Forster, Lytton Strachey, Arthur Waley, and John Maynard Keynes. Woolf published Mrs. Dalloway in 1925, To the Lighthouse in 1927, and A Room of One’s Own in 1929. Subject to fits of severe depression throughout her life, she put stones in her pockets and drowned herself in the River Ouse on March 28, 1941, having referred to her death as “the experience I shall never describe.”