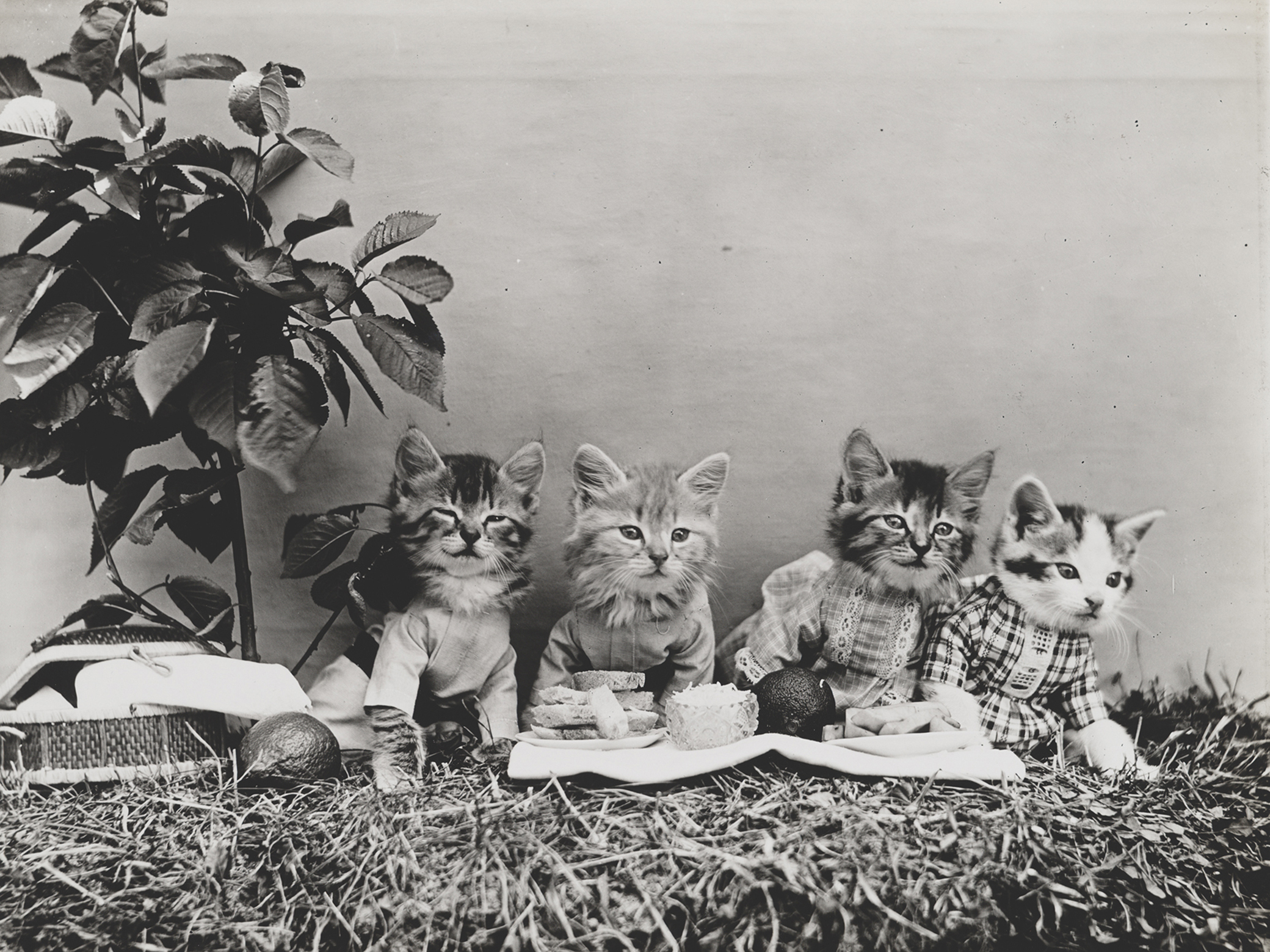 In 1893 the critic, biographer, and noted recreational cyclist Elizabeth Robins Pennell began writing about food for the Pall Mall Gazette. An American born in Philadelphia, she could usually be found in London when not hunting for material for her many travel books. She became a regular contributor to an anonymous Pall Mall Gazette column titled “The Wares of Autolycus,” which presented the work of assorted opinionated women; literary scholar Talia Schaffer explains in The Forgotten Female Aesthetes: Literary Culture in Late-Victorian England that the title “derived its name from the pickpocket, liar, and rogue Autolycus in The Winter’s Tale. Thus the very name of the column established the expectation that these women’s words are ruses to cheat the reader or, at best, ‘unconsider’d trifles.’ In spite of publishing under such a hostile cognomen, the ‘Wares’ authors wrote some of the most important prose of the period.”

Pennell wrote in a 1901 essay in The Atlantic that her only qualifications for pontificating on epicurean matters “were the healthy appetite and the honest love of a good dinner, usually considered ‘unbecoming to the sex.’ ” Her chief goal was to defend gluttony against its detractors. “Poor deluded humans, ever so keen to make the least of the short span of life allotted to them!” she wrote in one of her Pall Mall Gazette columns, “The Virtue of Gluttony”:

Today women, as a rule, think all too little of the joys of eating. They hold lightly the treasures that should prove invaluable. They refuse to recognize that there is no less art in eating well than in painting well or writing well, and if their choice lay between swallowing a bun with a cup of tea in an aerated bread shop and missing the latest picture show or doing without a new book, they would not hesitate; to the stodgy bun they would condemn themselves, though that way madness lies. Is it not true that the woman who would economize first draws her purse strings tight in the market and at the restaurant? With her milliner’s bill she may find no fault, but in butcher’s book, or grocer’s, every halfpenny is to be disputed. The loss is hers, but the generous-hearted can but regret it.

Her 1896 collection The Feasts of Autolycus: The Diary of a Greedy Woman includes a discussion of the ideal summer meal. Near the column’s end, she mentions the “most admirable salad dressing that man ever devised”; regular readers would know that she was referring to “the perfect dressing of vinegar and oil, pepper and salt,” which might on extremely rare occasions also include mustard. Prepare it at your own risk: “only the genius born can mix a salad dressing as it should be mixed.” 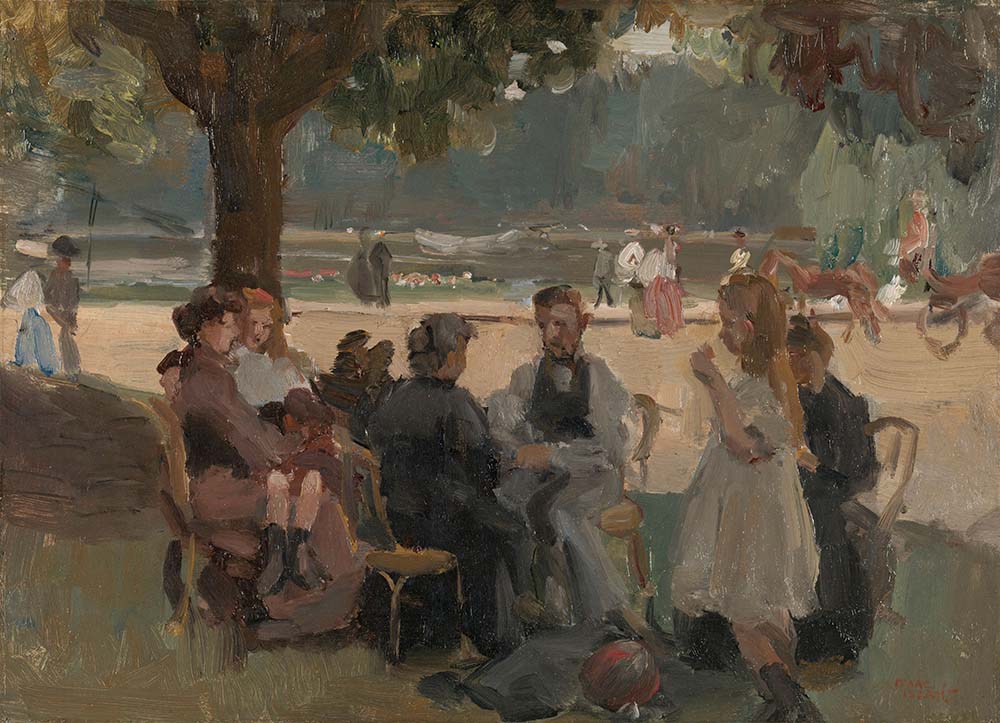 Tradition is a kindly tyrant. Why then strive to shake off its shackles? To bow the neck gladly beneath the yoke is at times to win rich reward, first in charm of association, and then in pleasantness of actual fact.

Is there not a tradition in England that supper is more appropriate to the quiet of Sunday evenings than dinner? No use to ask whence it arose or whither it leads. There it is, though many would evade it as senseless makeshift. To forswear dinner for all time and eternity would be worse than folly; it is life’s most solemn, most joyous ceremony. But once and again, for dear sake of contrast, to find a seducing substitute is wisdom in a world where all pleasures fail, and man is constant to one thing never. And now that summer has come and holds the green earth in its ardent embrace, now that days are long, and sweetest hours are those when the sun sinks low, there is new delight in the evening meal that leaves one free to dream in the twilight, that does not summon one indoors just as all outdoors is loveliest. Supper on every day in the week would be a mistake; but on one in seven it may well be commended. In the afternoon, tea is served in the garden, or whatever London can offer in the garden’s stead. There are a few strawberries in a pretty old porcelain dish to lend an air of dainty substance, and there is rich cream in which they may hide their pretty blushes; and there is gay talk and happy silence. Indolent hours follow. Is it not Sunday, and are not all weekly cares pigeonholed out of sight?

Nor do the advantages of the occasional supper end here. It is excellent excuse for the ice-cold banquet which in the warm summertime has its own immeasurable virtues. A supper should be cold; else it deteriorates into mere sham dinner. Never do cold dishes seem more delicious than when cruel thermometer is at fever heat. You see? There is logic in the Sunday-evening supper, at this season of all seasons for love, and eating, and drinking.

But supper does not mean, necessarily, veal and ham pie, above which British imagination dares not soar. It is not limited to the half-demolished joint—sad wreck of midday’s meal. It may be as fair and harmonious as dinner itself, as noble a tribute to the artist, as superb a creation. Only the thoughtless and prosaic will dismiss it carelessly in the ordering, believing that any odds and ends will answer. Whatever is left over is to many the one possible conception of the late evening meal. But the gourmand, exulting in his gluttony, makes of it a work of art, good in the eating, good in the remembrance thereof.

Summer allows wide scope for his fertile fancy. He may begin with salmon, refreshing to the eye in its arrangement of pale silver and rose, cold as the glaciers of Greenland after its long hours of repose on a voluptuous bed of ice. A mayonnaise sauce, creamy and rich, turning the silver to gold, like a fairy godmother of legend, is the cherished accompaniment. The feeling of wonder, aroused in the hours of watching under the trees, being still uppermost, it will seem as if the soft hues of the afterglow had been embodied in this exquisite prologue, with its rose and citron, its gold and soft gray tints. 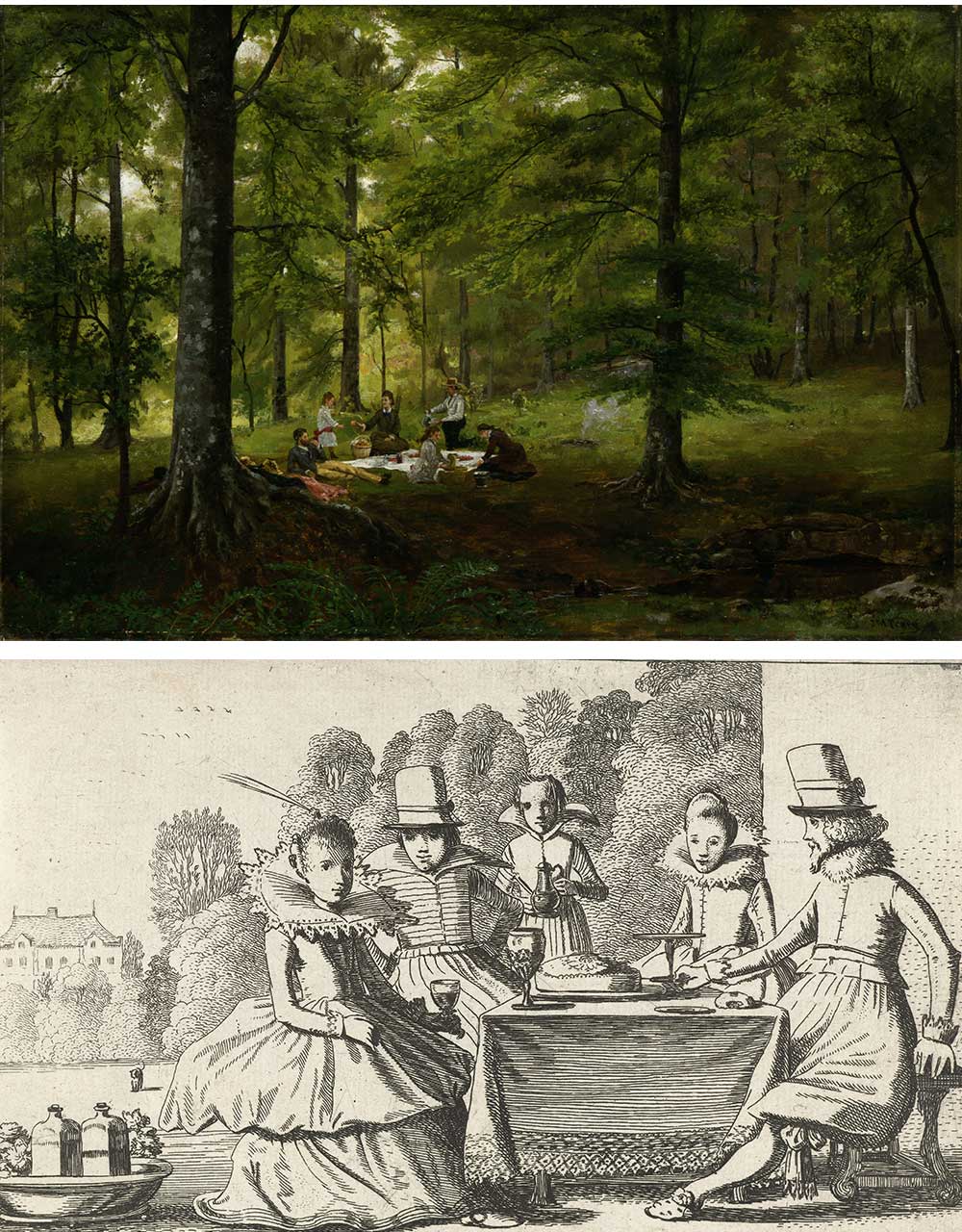 Tender spring chickens may then give greeting to the summertime. They also will have spent hours in close communion with solid blocks of ice and will be as cool as the breezes that blow over the high snow fields of Switzerland. For, be it noted in passing, without a refrigerator the perfect supper is sheer impossibility. Success depends largely upon temperature. Lukewarm supper would be as detestable as a lukewarm dinner. With the innocent chickens, chilling and chaste, a green salad will be as appropriate as edelweiss on Alpine slopes. It should be made of the hearts of the youngest of young cabbage lettuces, touched with onions, and fatigued with the one most admirable salad dressing that man ever devised. Linger as long as may be, for this surely is one of the beautiful moments that repay the artist for his toiling and his intervals of despair.

Asparagus will prove a most seemly successor. Let it also be cold beyond suspicion. A sauce of vinegar and oil, pepper and salt, force it to yield its most subtle sweetness. It will prove another course to call for lingering. Unless happiness be realized, of what use is it to be happy? He who is not conscious of pleasure when he eats is not worthy to sit at table with the elect. Like the animals, he is content to feed, and the art of the cook is, alas, lost upon him.

A savory at this banquet would be superfluous. The presence of cheese would be but deference to convention, and faithfulness to tradition does not demand as its price sacrifice of all freedom in detail. The asparagus would be dishonored were it to give place to aught more substantial than strawberries. Sometimes in the day’s menu, as in a decorative scheme, loveliness is enhanced by repetition. As a second curve emphasizes the grace of the first, so strawberries at supper carry out with great elegance the strawberry scheme of afternoon tea. Pretty hillocks of sugar, and deep pools of cream, make a rich setting for this jewel among fruits.

Be fearful of striking a false note. See that the coffee, black and strong though it be, is as cold as wine and salmon, chicken and salad. And pour the green Chartreuse into glasses that have been first filled with crushed ice. And as you smoke your cigarette, ask yourself if the Sunday-evening supper tradition be not one crying for preservation at all costs.

When another week has rolled by and disappeared into the Ewigkeit [eternity], vary the menu. An element of the bizarre, the strange, the unaccustomed, often lends irresistible piquancy. Be faithful to the refrigerator, however fickle to other loves. Open the banquet with a stirring salad fashioned of red herring and potatoes and, perhaps, a few leaves of lettuce. It savors of the sensational and stimulates appetite.

There is no written law to regulate these matters. But the true artist needs no code to guide him. He knows instinctively what is right and what is wrong, and doubts can never assail him.

Elizabeth Robins Pennell, born in Philadelphia, was a prolific producer of copy, publishing more than twenty books and thousands of magazine articles, a few co-written with her husband, the artist Joseph Pennell. Subjects included Mary Wollstonecraft; the pleasures of riding a bicycle in various continental locales; the joys of gluttony; her prodigious collection of cookbooks; the famous artists, writers, and intellectuals who visited her London home; and a close examination of one of those visitors, James Abbott McNeill Whistler. A line from William Makepeace Thackeray was her lodestar: “Next to eating good dinners, a healthy man with a benevolent turn of mind must like, I think, to read about them.” The words “encourage me,” she wrote in 1902, “if I need encouragement.”