Born to a roving astrologer father and a spiritualist mother, Jack London, born John Griffith Chaney, led a peripatetic life as a youth. After dropping out of school at fourteen, he explored San Francisco Bay in a sloop, went to Japan as a sailor, saw much of the United States as a stowaway on freight trains, was jailed for public vagrancy, all while educating himself at public libraries with the writings of Darwin, Nietzsche, and Karl Marx. From 1899 till his death in 1916, London produced fifty books of fiction, among them, Call of the Wild in 1903, The Sea Wolf in 1904, and White Fang in 1906.

The March of the Flames

All the world is topsy-turvy, and it has been topsy-turvy ever since the plague. 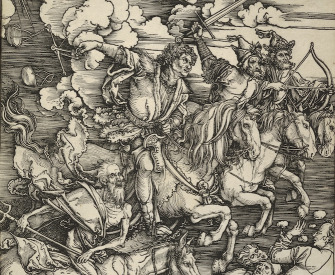 Remembering the plague that ended the world. More