Though the subject of aerial navigation is generally considered new, it has occupied the minds of men more or less from the earliest ages. Our personal interest in it dates from our childhood days.

Late in the autumn of 1878, our father came into the house one evening with some object partly concealed in his hands, and before we could see what it was, he tossed it into the air. Instead of falling to the floor, as we expected, it flew across the room till it struck the ceiling, where it fluttered awhile and finally sank to the floor. It was a little toy known to scientists as a hélicoptère, but which we, with sublime disregard for science, at once dubbed a “bat.” It was a light frame of cork and bamboo covered with paper, which formed two screws driven in opposite directions by rubber bands under torsion. A toy so delicate lasted only a short time in the hands of small boys, but its memory was abiding.

Several years later we began building these hélicoptères for ourselves, making each one larger than that preceding. But to our astonishment, we found that the larger the “bat,” the less it flew. We did not know that a machine having only twice the linear dimensions of another would require eight times the power. We finally became discouraged and returned to kite flying, a sport to which we had devoted so much attention that we were regarded as experts. But as we became older, we had to give up this fascinating sport as unbecoming to boys of our ages.

It was not till the news of the sad death of Otto Lilienthal reached America in the summer of 1896 that we again gave more than passing attention to the subject of flying. We then studied with great interest Octave Chanute’s Progress in Flying Machines, Samuel Langley’s Experiments in Aerodynamics, and several pamphlets published by the Smithsonian Institution, especially articles by Lilienthal and extracts from Louis-Pierre Mouillard’s Empire of the Air. The larger works gave us a good understanding of the nature of the flying problem and the difficulties in past attempts to solve it, while Mouillard and Lilienthal, the great missionaries of the flying cause, infected us with their own unquenchable enthusiasm and transformed idle curiosity into the active zeal of workers.

Lilienthal and Chanute had guided and balanced their machines by shifting the weight of the operator’s body. But this method seemed to us incapable of expansion to meet large conditions, because the weight to be moved and the distance of possible motion were limited, while the disturbing forces steadily increased, both with wing area and with wind velocity. In order to meet the needs of large machines, we wished to employ some system whereby the operator could vary at will the inclination of different parts of the wings and thus obtain from the wind forces to restore the balance that the wind itself had disturbed. This could easily be done by using wings capable of being warped, and by supplementary adjustable surfaces in the shape of rudders. A happy device was discovered whereby the apparently rigid system of superposed surfaces could be warped in a most unexpected way, so that the aeroplanes could be presented on the right and left sides at different angles to the wind. This, with an adjustable horizontal front rudder, formed the main feature of our first glider.

We began our active experiments in October 1900 at Kitty Hawk, North Carolina. Our machine was designed to be flown as a kite, with a man on board, in winds of from fifteen to twenty miles an hour. But upon trial it was found that much stronger winds were required to lift it. Suitable winds not being plentiful, we found it necessary, in order to test the new balancing system, to fly the machine as a kite without a man on board, operating the levers through cords from the ground. This did not give the practice anticipated, but it inspired confidence in the new system of balance. We then turned to gliding—coasting downhill on the air—as the only method of getting the desired practice in balancing a machine. After a few minutes’ practice, we were able to make glides of over three hundred feet and in a few days were safely operating in twenty-seven-mile winds. 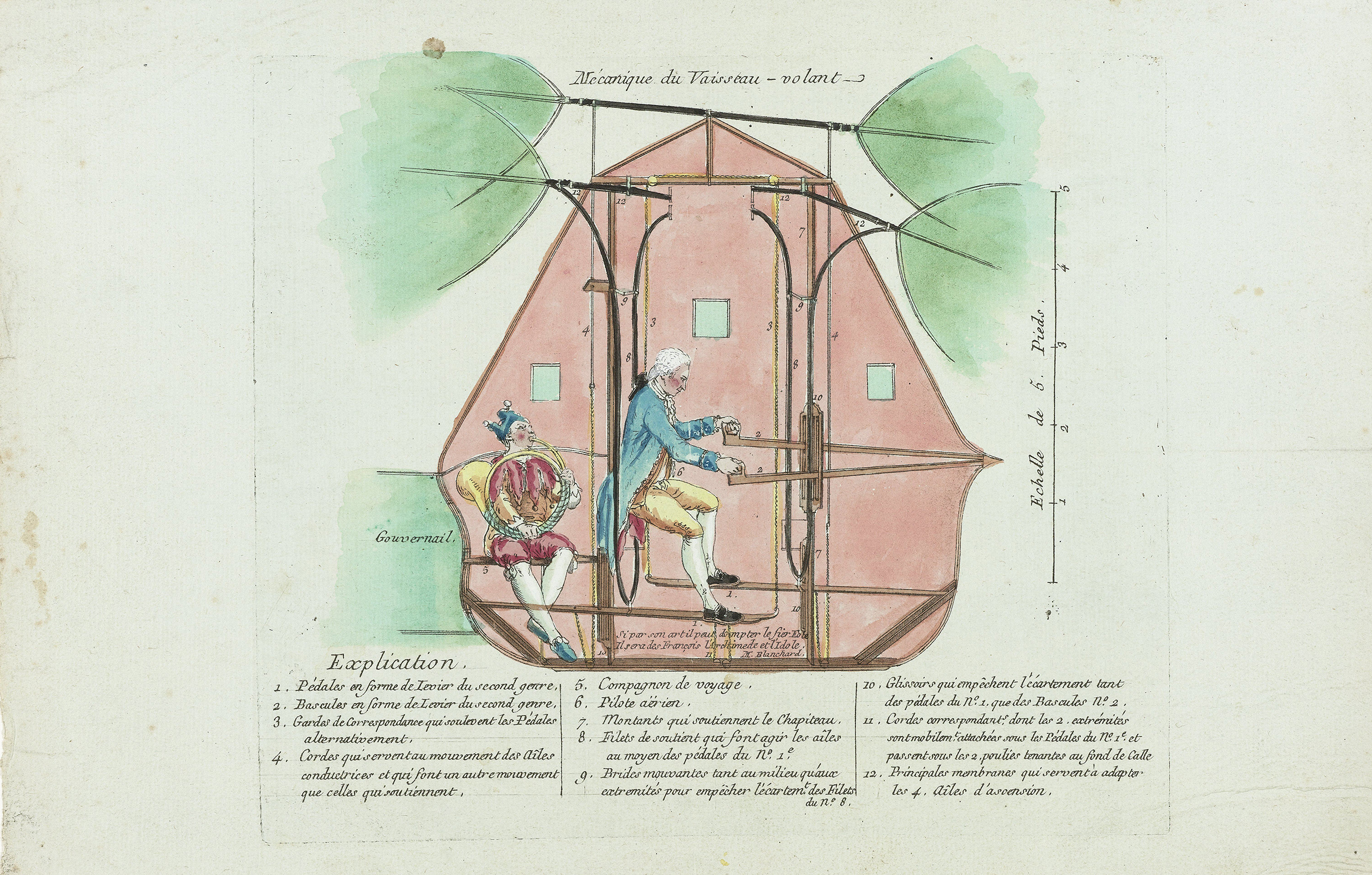 Although the results obtained were better than those of any of our predecessors, we saw that the calculations upon which all flying machines had been based were unreliable, and that all were simply groping in the dark. Having set out with absolute faith in the existing scientific data, we were driven to doubt one thing after another, till finally after two years of experiment, we cast it all aside and decided to rely entirely upon our own investigations. Truth and error were everywhere so intimately mixed as to be undistinguishable.

We had taken up aeronautics merely as a sport. We reluctantly entered upon the scientific side of it. But we soon found the work so fascinating that we were drawn into it deeper and deeper. Two testing machines were built, which we believed would avoid the errors to which the measurements of others had been subject. After making preliminary measurements on a great number of different-shaped surfaces to secure a general understanding of the subject, we began systematic measurements of standard surfaces so varied in design as to bring out the underlying causes of differences noted in their pressures. Measurements were tabulated on nearly fifty of these at all angles, from 0 to 45 degrees, at intervals of 2.5 degrees.

In September and October 1902, nearly one thousand gliding flights were made, several of which covered distances of over six hundred feet. With this machine, in the autumn of 1903 we made a number of flights in which we remained in the air for over a minute, often soaring for a considerable time in one spot, without any descent at all.

With accurate data for making calculations and a system of balance effective in winds as well as in calms, we were now in a position, we thought, to build a successful power flyer. The first designs provided for a total weight of 600 pounds, including the operator and an eight-horsepower motor. But upon completion the motor gave more power than had been estimated, and this allowed 150 pounds to be added for strengthening the wings and other parts.

The first flights with the power machine were made on December 17, 1903. Only five persons besides ourselves were present. Although a general invitation had been extended to the people living within five or six miles, not many were willing to face the rigors of a cold December wind in order to see, as they no doubt thought, another flying machine not fly. The first flight lasted only twelve seconds, a flight very modest compared with that of birds, but it was, nevertheless, the first in the history of the world in which a machine carrying a man had raised itself by its own power into the air in free flight, had sailed forward on a level course without reduction of speed, and had finally landed without being wrecked. The second and third flights were a little longer, and the fourth lasted fifty-nine seconds, covering a distance of 852 feet over the ground against a twenty-mile wind.

I have always found it in mine own experience an easier matter to devise many and profitable inventions than to dispose of one of them to the good of the author himself.

We had not been flying long in 1904 before we found that the problem of equilibrium had not as yet been entirely solved. Sometimes in making a circle the machine would turn over sideways despite anything the operator could do, although under the same conditions in ordinary straight flight, it could have been righted in an instant. The causes of these troubles—too technical for explanation here—were not entirely overcome till the end of September 1905. The flights then rapidly increased in length, till experiments were discontinued after the October 5, on account of the number of people attracted to the field. Although made on a ground open on every side and bordered on two sides by much-traveled thoroughfares, with electric cars passing every hour and seen by all the people living in the neighborhood for miles around, and by several hundred others, yet these flights have been made by some newspapers the subject of a great “mystery.”

In order to show the general reader the way in which the machine operates, let us fancy ourselves ready for the start. The machine is placed upon a single rail track facing the wind and is securely fastened with a cable. The engine is put in motion, and the propellers in the rear whir. You take your seat at the center of the machine beside the operator. He slips the cable, and you shoot forward. An assistant who has been holding the machine in balance on the rail starts forward with you, but before you have gone fifty feet, the speed is too great for him, and he lets go. Before reaching the end of the track, the operator moves the front rudder, and the machine lifts from the rail like a kite supported by the pressure of the air underneath it. The ground under you is at first a perfect blur, but as you rise the objects become clearer. At a height of one hundred feet, you feel hardly any motion at all, except for the wind that strikes your face. If you did not take the precaution to fasten your hat before starting, you have probably lost it by this time. The operator moves a lever: the right wing rises, and the machine swings about to the left. You make a very short turn, yet you do not feel the sensation of being thrown from your seat, so often experienced in automobile and railway travel. You find yourself facing toward the point from which you started. The objects on the ground now seem to be moving at much higher speed, though you perceive no change in the pressure of the wind on your face. You know then that you are traveling with the wind. When you near the starting point, the operator stops the motor while still high in the air. The machine coasts down at an oblique angle to the ground, and after sliding fifty or a hundred feet comes to rest. Although the machine often lands when traveling at a speed of a mile a minute, you feel no shock whatever and cannot, in fact, tell the exact moment at which it first touched the ground. The motor close beside you kept up an almost deafening roar during the whole flight, yet in your excitement you did not notice it till it stopped.

From an article in The Century Magazine. After opening a bicycle shop in 1892, the brothers invented a self-oiling wheel hub, the profits of which they used to fund their aeronautical research. While at Kitty Hawk, they observed “daily the soaring flight of buzzards, fish and chicken hawks, and eagles,” marveling at “the instinct of the birds which led them to create for themselves a soaring condition where it did not already exist.” This article was the first popular account of the brothers’ experiments. At the time of publication, trials were being held for the “flyer” they had been contracted to deliver to the U.S. government.