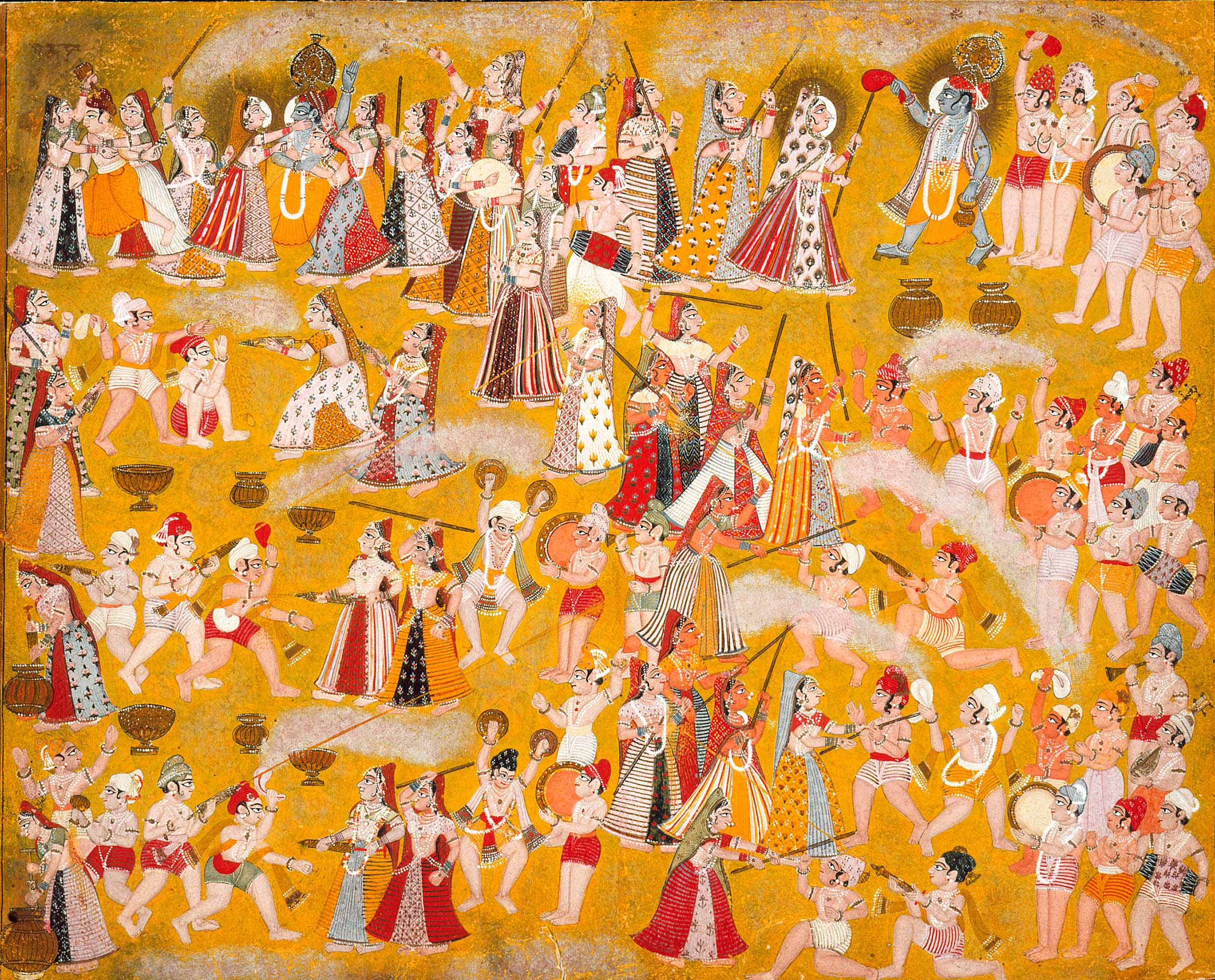 affinity: Relationship by marriage. Also, liking for or attraction to a person or thing; natural inclination toward something; sympathy and understanding for something. Latter sense rare before 19th cent.

amicable: Friendly; esp. of mutual arrangements, done in a generous spirit, with mutual goodwill, or without quarreling or employment of force; peaceable, harmonious.

amity: Friendly relations, esp. of a public character between states or individuals. “The less we have to do with the amities or enmities of Europe, the better.”—Thomas Jefferson, 1815

benevolent: Desirous of the good of others, of a kindly disposition, charitable, generous.

bromance: An intimate and affectionate friendship between men. First attested use, 2001.

buddy system: A cooperative arrangement whereby a pair of individuals take responsibility for each other’s safety or welfare; the practice of appointing friends or allies to positions of influence or otherwise showing them special favor. 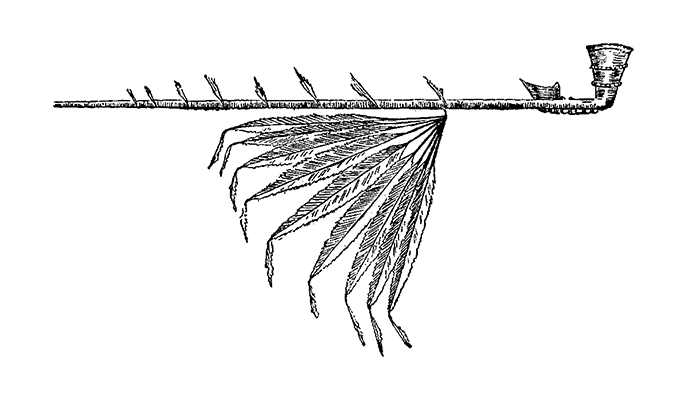 A tobacco pipe with a clay or stone bowl and a long reed stem carved and ornamented with feathers. Used among American Indians as a symbol of peace or friendship; also called a peace pipe. To accept the calumet is to welcome offered terms of peace; to refuse it is to reject them. From chalumet, French Canadian for plants of which the stems serve as pipe tubes and to the Indian pipe. “Take the reeds that grow beside you, / Deck them with your brightest feathers / Smoke the calumet together, / And as brothers live henceforward!”—Henry Wadsworth Longfellow, The Song of Hiawatha, 1855

chum: One who shares apartments with another, one who resides in the same room or rooms (“A chamber fellow, a term used in the universities.”—Samuel Johnson, 1755); also, more generally, habitual companion, associate, intimate friend. Recorded only since c. 1684. A conjecture is that it was a familiar abbreviation of chamber fellow, chamber mate, or the like; no historical proof or connecting link has been found.

comity: Courtesy, civility, urbanity; kindly and considerate behavior toward others. “It is the rule of mere comity and courtesy to agree where you can.”—Ralph Waldo Emerson, 1845

companion: A person one chooses to socialize or associate with. “Who is his companion now? He hath every month a new sworn brother.”—William Shakespeare, Much Ado About Nothing, c. 1600

comrade: Used by socialists and communists as a prefix to the surname, to avoid titles such as Mr. Hence, a fellow socialist or communist. “Comrade Maguire spoke at some length on the aims of socialism.”—Justice, 1884. Applied to a ship: a consort. Also, in South Africa, a young, black, left-wing political activist; hence, any politically motivated township youth, esp. one involved in civil disorder.

crony: An intimate friend or associate. First found after 1660. According to Stephen Skinner’s Etymologicon Linguae Anglicanae (1671), the word was “vox academica,” i.e., a term of university or college slang. No connection with crone has been traced.

etiquette: The customary code of polite behavior in society; good manners. From French étiquette, a label or note attached to an object detailing its contents (Middle French estiquette, 1435), a written note recording work undertaken (1484–85), prescribed rules of ceremony at court (1691).

fraternity: The state or quality of being fraternal or brotherly; brotherliness. “The phrase which corresponded to this imaginary abolition of class relations was fraternité, general fraternization and brotherhood.”—Karl Marx, 1850

friend: (transitive v., Caribbean) To have a sexual relationship with someone. Frequently used with with.

friend Indian: A member of one of the indigenous peoples of the Americas characterized as friendly or well-disposed toward white settlers and their society; esp. one who acted as an ally to European colonizers during the American Indian wars.

friendly lead: In poorer areas of Victorian and Edwardian London, a party or other entertainment held by friends of a sick, destitute, or recently deceased person in order to raise money to help the person or pay for his or her funeral.

kola: (Lakota) A close male friend, closer than one’s brother. Orig., to acknowledge another man as kola is a lifetime commitment.

pal: A partner or accomplice in some activity (in early use, typically a criminal one). From English Romani phal, brother, mate; from common Romani phral; from Sanskrit bhrātṛ, brother. 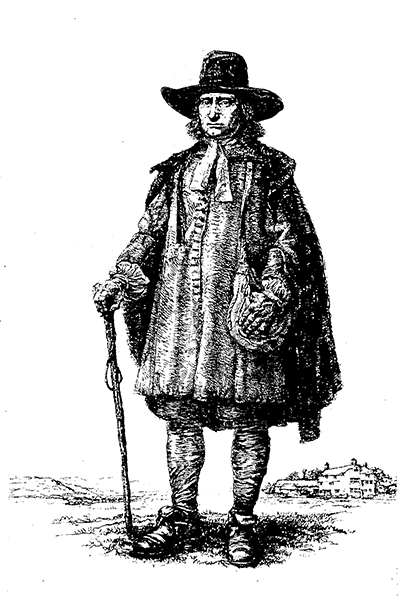 A member of the Religious Society of Friends, a Christian group guided by direct, firsthand encounters with the deity. According to founder George Fox (right), the name was first given to himself and his followers by Gervase Bennet in 1650: “This was Justice Bennet of Derby that called us Quakers because we bid them tremble at the word of God.”

rapport: Harmonious accord, correspondence; a close relationship or connection. In the field of psychology, with reference to a relationship between therapist and patient or tester and subject; later in more general use, applied to a harmonious relationship in which the people or groups concerned understand each other’s feelings or ideas and communicate well. “Manipulation of rapport is thus made the core of psychoanalytic treatment.”—J.T. MacCurdy, 1922

ubuntu: (South African) The various values and virtues of essential humanity. “It seems to me that we in the black community have lost our sense of ubuntu—our humanness, caring, hospitality, our sense of connectedness, our sense that my humanity is bound up in your humanity.”—Desmond Tutu, 1991

wingman: A friend brought to a bar or party to facilitate the meeting of potential sexual partners.

A Hierarchy of Friendship

“For Arabs friendship is a serious concept, and it is all about duration and intensity. It is of utmost importance to choose a friend that will never embarrass you in public. If your friend is a true friend, you feel at ease imposing on him or her at any time, taking it for granted that they will do their best to help you. Once you make a friend, you will do everything for the sake of your friend. Generally, and compared to the West, Arab friendship is more intense and involves a system of balancing favors against obligations. To keep a friend is a priority.”—Arabic linguist Nader Al Jallad