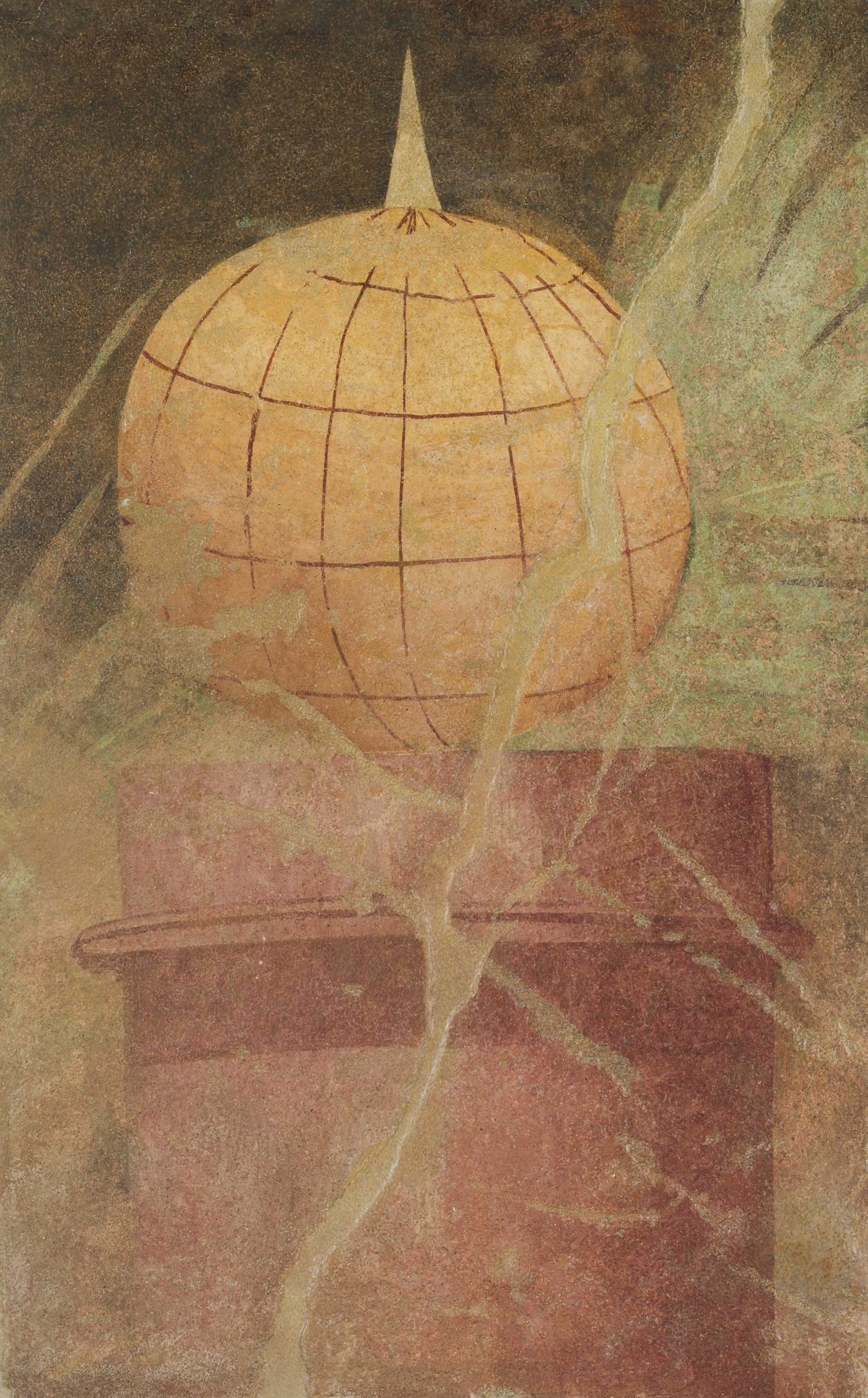 Wall painting fragment from the peristyle of the Villa of P. Fannius Synistor at Boscoreale, Roman, c. 50 bc. The Metropolitan Museum of Art, Rogers Fund, 1903.

Everyone in Rome remembered the day the sundial came to town. Manius Valerius Maximus, the returning war hero, had stood proudly and imperiously on the elevated rostrum at the heart of the Roman Forum. In front of him were huge, cheering crowds, eager to celebrate their elected consul who had commanded Rome’s military forces to a decisive victory on the island of Sicily. It was Valerius who had captured the city of Catania for the Roman Republic, and it was he who brokered a treaty at Syracuse, the most important strategic alliance in Roman history. The year was 263 bc, and the taking of Catania an early success in the First Punic War, between the rival states of Carthage and Rome. War booty, plundered from the island, brought the victory tangibly back to the people. Often that meant the prows of captured enemy ships, hacked off and mounted on columns in public centers like the Forum. But it was not all about military trophies and plundered treasure. One of the objects that Valerius had looted from Catania was modest to look at, even mundane. But it came to change the lives of ordinary Romans—​and our own—​forever.

Pointing to a spot by the rostrum on which he stood, Valerius revealed the sundial he had brought back from Sicily and mounted on a column that bore his name. It took the form of a large block of marble in which a hemispherical cavity had carefully been chiseled out. At the top of the cavity was a bronze pointer, or gnomon, and lines carved into the marble acted as the time-​telling scales onto which the gnomon’s shadow fell. It told the time and calendar of Sicily, slightly different from that of Rome, but it did not really matter. It showed that Rome was on top, and the crowd had gone wild.

Everybody knew that triumphal columns in public spaces like the Forum were symbols of great military power, which meant that Valerius’ public sundial of 263 bc, which was Rome’s first, was not simply an ornament. As war booty from the sacking of Catania, displayed on its column in the very spot where Rome’s most famous public speeches were made, Valerius’ sundial stood proudly for the military might of the Republic. But this column was destined for higher fame. As the crowd dispersed from the Forum that day, few realized the true significance of what they had just witnessed. It had seemed as if they were celebrating a decisive victory against the Carthaginians by cheering the plundered sundial set up in Valerius’ name. But they soon learned otherwise.

The sundial from Catania was joined by dozens more across Rome, each designed to regulate and control the myriad daily activities of Rome’s citizens—​who quickly became uneasy at the intrusion of this new timekeeping technology. 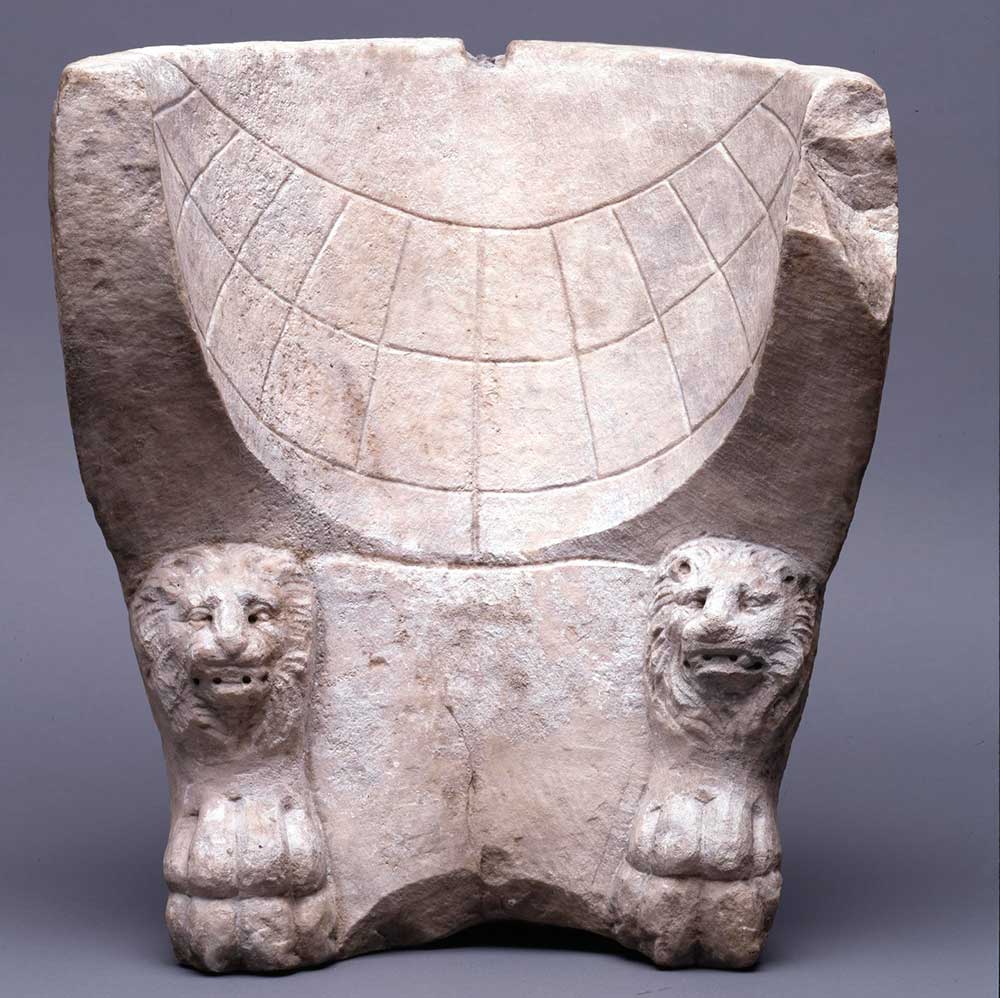 Things eventually got so bad that sundials became a target for the city’s playwrights and critics, who poured scorn on the new devices. Writing a few years after the Forum sundial had first been installed, one exasperated playwright made a character exclaim:

The gods damn that man who first discovered the hours, and—​yes—​who first set up a sundial here, who’s smashed the day into bits for poor me! You know, when I was a boy, my stomach was the only sundial, by far the best and truest compared to all of these. It used to warn me to eat, wherever—​except when there was nothing. But now what there is, isn’t eaten unless the sun says so. In fact town’s so stuffed with sundials that most people crawl along, shriveled up with hunger.

A later writer described sundials like the one mounted at the Forum as “hateful” and called for the columns on which they were fixed to be torn down with crowbars.

But it was too late. Public sundials began to appear across the Republic. Valerius’ own triumphal sundial survived the public outrage for exactly ninety-​nine years, only to be replaced in 164 bc by one that was even more accurate. Five years after that, the hated sundials of Rome were joined by a new public timekeeper at the Forum, a water clock, which kept the time through the night as well as the day. Now the clock ruled the sleeping hours of Romans as well as their waking ones.

We should think of the sundial in the Roman Forum as the city’s first clock tower. Mounted up high, looking over the people, and standing for Rome’s ruling classes themselves, it changed everything. From the moment Valerius revealed his sundial at the Forum, Romans were forced to live their lives by the clock. And this new temporal order was sweeping civilizations across the world.

The Tower of the Winds, in the Greek city of Athens some 650 miles from Rome, is one of the best-​preserved buildings from the ancient world. This octagonal marble tower, sited close to a busy marketplace at the foot of the hill of the famous Acropolis, rises forty-​two feet into the air and measures twenty-​six feet across, and it was an astonishing sight for the people of this crowded and vibrant city. The external walls were covered in brightly colored reliefs and moldings representing the eight winds, with each of the eight walls, and a semi-​circular annex, carrying a sundial. Inside the ceiling was painted a stunning blue color covered with golden stars. At the center of the imposing interior was a water clock, which was fed from a sacred source high up on the hill of the Acropolis called the Clepsydra, a name which became synonymous with all water clocks. The clock is believed once to have driven a complex mechanical model of the heavens themselves, like a planetarium, orrery, or armillary sphere. 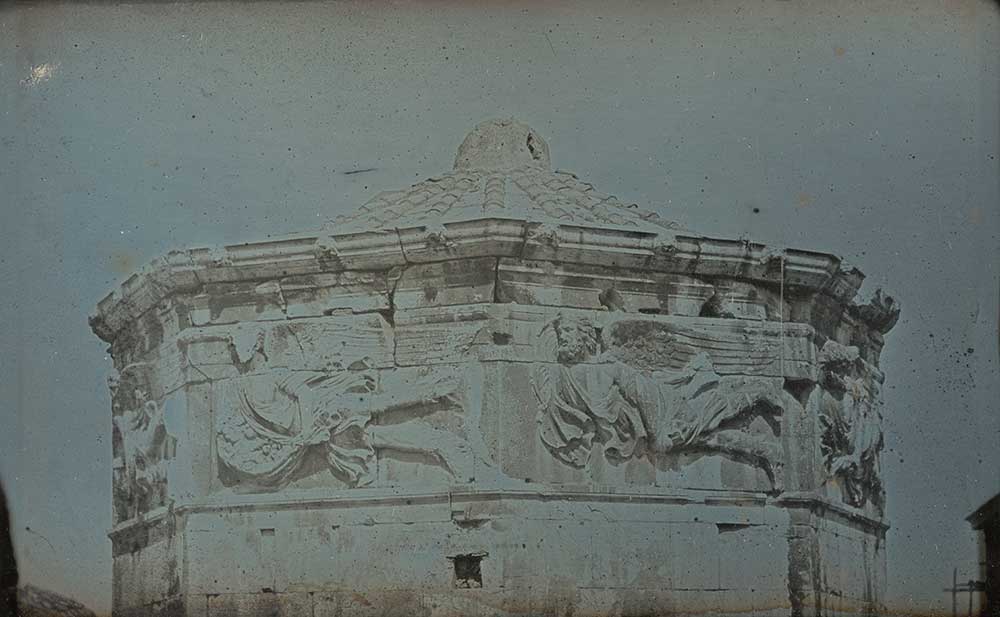 Nobody is quite sure when the Tower of the Winds was built, but it was probably about 140 bc. As with the sundial at the Roman Forum, we can think of it as an early public clock tower, giving Athenians the time of day as they went about their daily business at the market and elsewhere, and giving order to their lives. It was also symbolic of a wider order. The gods of the winds, depicted on its decorative panels, were allegories of world order; the stars inside, together with the water clock and its mechanical replica of the heavens, were symbolic of a cosmic order. Certainly, it was an astonishing spectacle.

But, also like the sundial proudly installed by Valerius in Rome, the Tower of the Winds may have carried a further message. If, as some historians believe, the structure was built by Attalos II, king of the Greek city of Pergamon, to commemorate the Athenian defeat of the Persian Navy in 480 bc, then it could serve as a vivid peacetime reminder of the military strength of the state—​and the discipline needed to maintain it.

Even more historically sketchy is the tantalizing possibility that the city of Verona, once part of the Roman Empire but by the year 507 ruled by the Gothic king Theodoric, contained a tower that housed a huge water clock, set right by the Sun, which not only showed the time but sounded it in an extravaganza of noise. A scholar working in Theodoric’s court explained that “musical instruments sound with strange voices obtained by the violent springing up of waters from beneath,” and it is hard to imagine a more potent expression of the power of the new Goth order in the city. Theodoric himself explained the purpose of the clock: to let the people of Verona “distinguish the various hours of the day and thus decide how best to occupy every moment.” A sundial on a high tower might be missed or misread. With a monumental acoustic clock tower calling out the hours just outside Verona’s city walls, time, and the order it implied, could not be ignored.

In empires around the world, the sight and sound of time from high towers had begun to organize the lives of the people, and project a message of power and order. Long before Verona’s acoustic clock tower was built, towers carrying drums or bells loomed large over imperial Chinese towns and cities, often centered on marketplaces. The second-​century Chinese scholar Cai Yong explained, “When the night clepsydra runs out, the drum is beaten and people get up. When the day clepsydra runs out, the bell is struck and people go to rest.” A third-​century description of the tower built over the marketplace at the ancient city of Luoyang read, “A drum was hung in the building. When it sounded, the market was closed. There was also a bell. When it was struck, the sound was heard within fifty Chinese miles.” 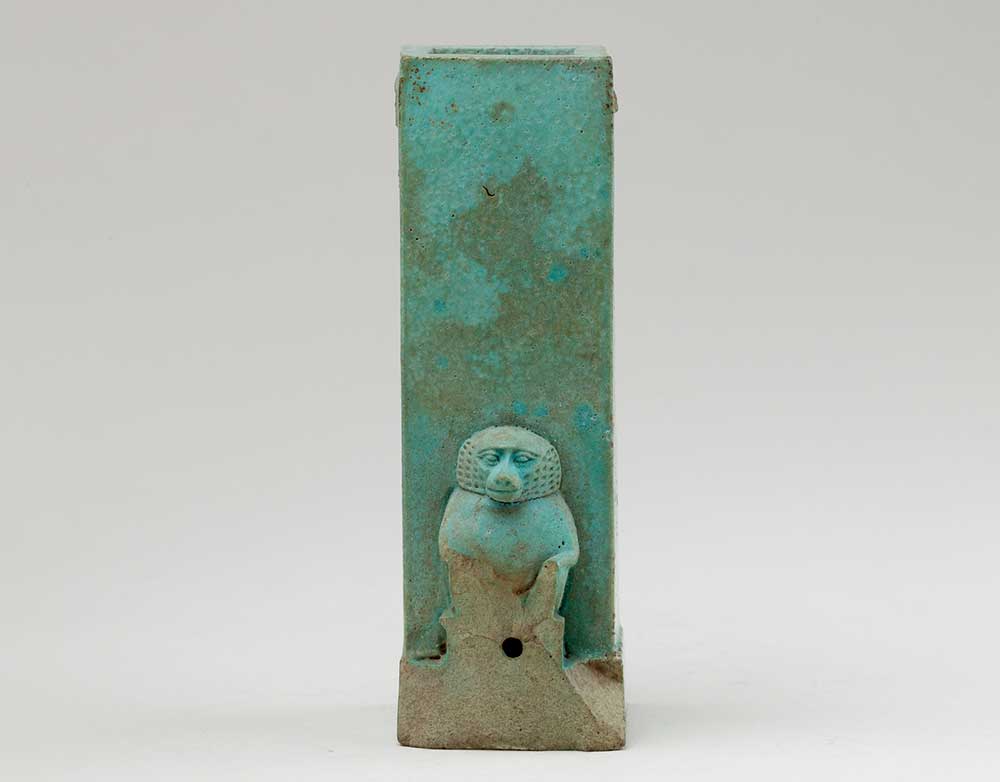 Over a thousand years later, in the late thirteenth century, when the Venetian merchant Marco Polo visited Kublai Khan’s capital city of Dadu (in today’s Beijing), he found two towers standing tall over the city center. One tower contained drums, the other a bell, and all were sounded every evening to mark the start of a strict curfew as measured by a water clock. Anyone caught on the streets after the curfew sounded would be arrested and beaten by troops patrolling the city through the night on horseback. Across imperial Japan, too, from at least the eighth century onward, each major city, whether a capital such as Nara or Kyoto or a more distant outpost, had its clepsydra and a tall tower from which time was sounded to the public, as well as raising the alarm when the population was in danger from fire or attack. Clock towers were part of the ordering infrastructure of cities.

It is tempting, in the twenty-​first century, to feel that we are the first generation to resent being governed by the clock as we go about our daily lives; that we are no longer in control of what we do and when we do it because we must follow the clock’s orders. During our long warehouse shifts, sitting at our factory workstations, or enduring seemingly never-​ending meetings at the office, we might grumble that the morning is dragging on, but we cannot eat because the clock has not yet got around to lunchtime. But these feelings are nothing new. In fact, while the public sundial was new to Romans in 263 bc, it had been in widespread use long before that in other cities around the world; the first water clocks date back even further than sundials, more than 3,500 years to ancient Babylon and Egypt.

Public time has been on the march for thousands of years. It is easy to think that public clocks are an inevitable feature of our lives. But by looking more closely at their history, we can understand better what they used to mean—​and why they were built in the first place. Because wherever we are, as far back as we care to look, we can find that monumental timekeepers mounted high up on towers or public buildings have been put there to keep us in order, in a world of violent disorder.

Reprinted from About Time: A History of Civilization in Twelve Clocks. Copyright © 2021 by David Rooney. With permission of the publisher, W.W. Norton & Company, Inc. All rights reserved.

David Rooney, the son of a prominent North East England clockmaker, is a historian of technology; former curator of timekeeping at the Royal Observatory, Greenwich; and author of About Time: A History of Civilization in Twelve Clocks. He helps run three horological institutions, including the world’s oldest clock and watch museum, and lives in London, close to the Greenwich meridian.