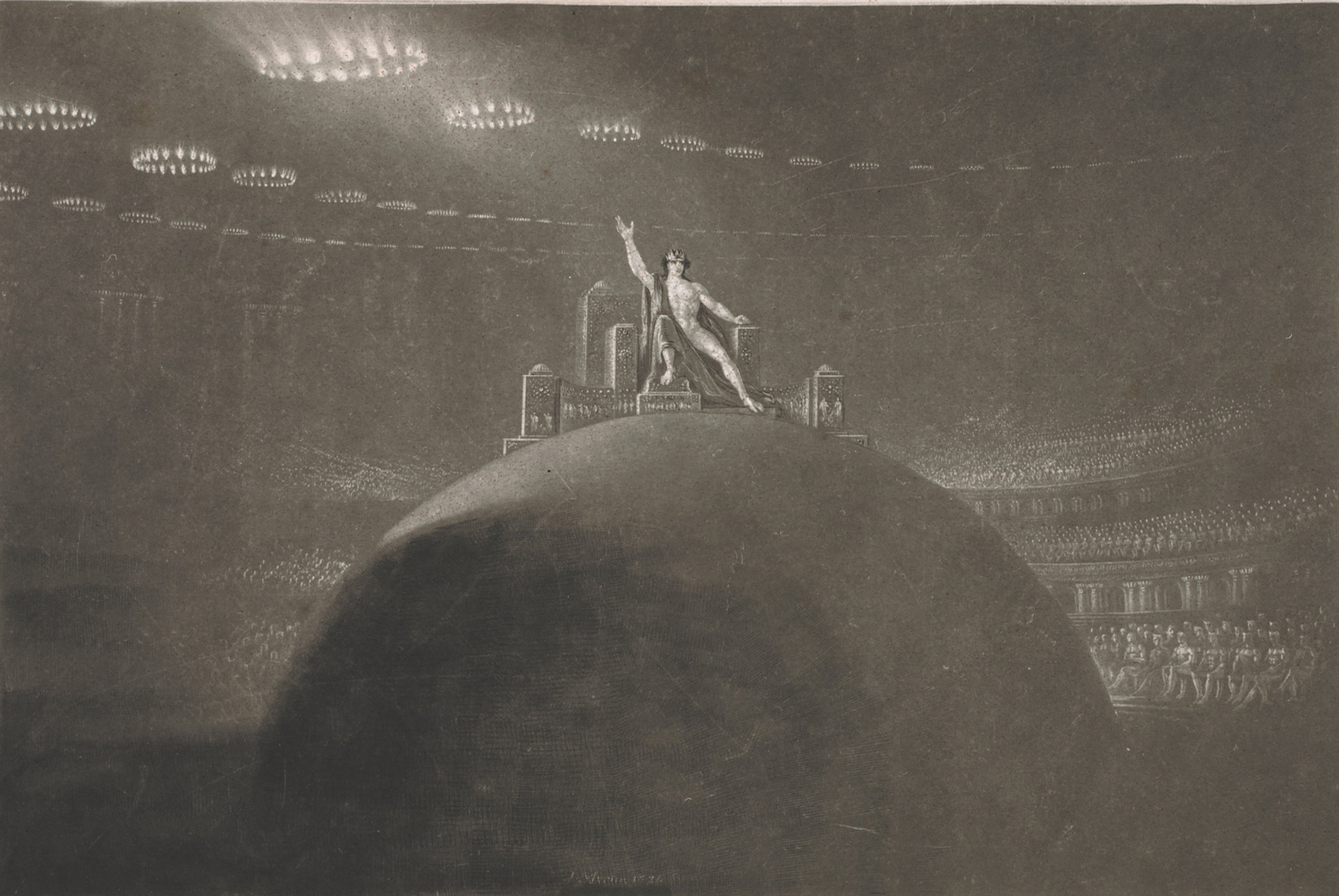 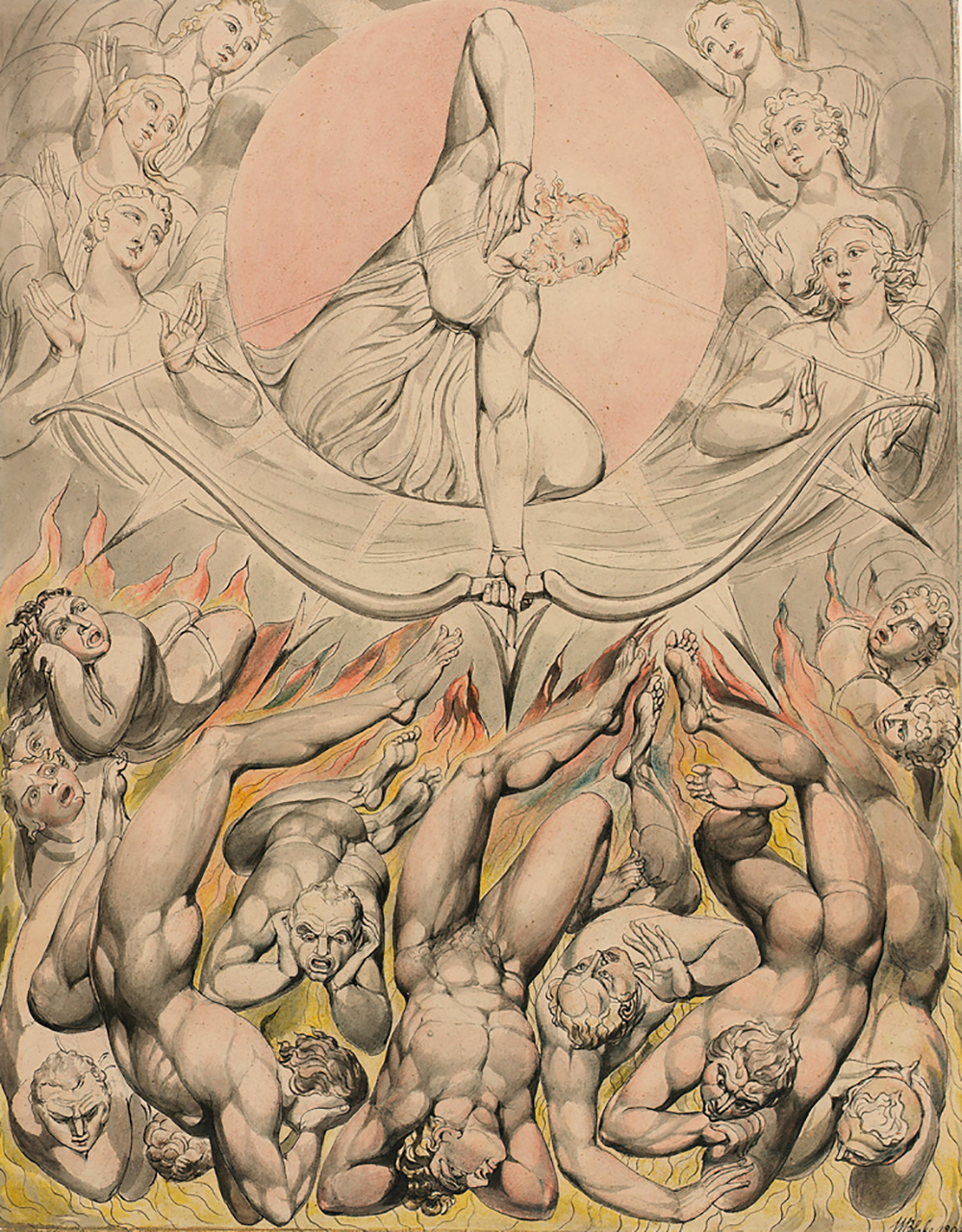 Book 2 in John Milton’s Paradise Lost finds the infernal rhetoricians Belial and Beelzebub, with assists from Moloch and Mammon, debating whether or not they should go to war with the kingdom of Heaven. The pair give a set of over-the-top campaign speeches in front of their constituency—their fellow fallen angels—before the matter is put to a vote. Belial believes that the perimeter of Heaven is too well fortified for any meaningful attack and insists that the demons must construct their own empire to stand rival to the one above. In his response below, Beelzebub mocks the optimism that would suggest Hell could ever stand as its own empire, making clear that absolute destruction and dissolution is the only option—and that this new world of mortal men might be the perfect battleground. After his call to arms ends, “joy sparkled in all their eyes” as the fallen angels unanimously vote for Beelzebub’s proposal, and Satan congratulates all on a “well-ended long debate.”

“Thrones and Imperial Powers, Offspring of Heaven,
Ethereal Virtues, or these titles now
Must we renounce and changing style be called
Princes of Hell? For so the popular vote
Inclines, here to continue and build up here
A growing empire. Doubtless! while we dream,
And know not that the King of Heaven hath doomed
This place our dungeon not our safe retreat
Beyond His potent arm, to live exempt
From Heaven’s high jurisdiction in new league
Banded against His throne, but to remain
In strictest bondage, though thus far removed,
Under the inevitable curb reserved,
His captive multitude. For He, be sure,
In height or depth still first and last will reign
Sole king and of His kingdom lose no part
By our revolt but over Hell extend
His empire and with iron scepter rule
Us here as with His golden those in Heaven.
What sit we then projecting peace and war?
War hath determined us and foiled with loss⁠
Irreparable, terms of peace yet none
Vouchsafed or sought. For what peace will be given
To us enslaved but custody severe,
And stripes and arbitrary punishment
Inflicted? And what peace can we return,
But to our power hostility and hate,
Untamed reluctance and revenge, though slow,
Yet ever plotting how the Conqueror least
May reap his conquest and may least rejoice
In doing what we most in suffering feel?⁠
Nor will occasion want nor shall we need
With dangerous expedition to invade
Heaven whose high walls fear no assault or siege
Or ambush from the deep. What if we find
Some easier enterprise? There is a place,
If ancient and prophetic fame in Heaven
Err not, another world, the happy seat
Of some new race called Man about this time
To be created like to us though less
In power and excellence but favored more⁠
Of him who rules above. So was His will
Pronounced among the gods and by an oath
That shook Heaven’s whole circumference confirmed.
Thither let us bend all our thoughts to learn
What creatures there inhabit, of what mold
Or substance, how endued and what their power
And where their weakness, how attempted best
By force or subtlety. Though Heaven be shut
And Heaven’s high Arbitrator sit secure
In His own strength, this place may lie exposed,⁠
The utmost border of His kingdom left
To their defense who hold it. Here perhaps
Some advantageous act may be achieved
By sudden onset, either with Hell fire
To waste His whole creation or possess
All as our own and drive, as we were driven,
The puny habitants, or if not drive
Seduce them to our party that their God
May prove their foe and with repenting hand
Abolish His own works. This would surpass⁠
Common revenge and interrupt His joy
In our confusion and our joy upraise
In His disturbance when His darling sons
Hurled headlong to partake with us shall curse
Their frail originals and faded bliss—
Faded so soon! Advise if this be worth
Attempting or to sit in darkness here
Hatching vain empires.”

Born in 1608, three years before the publication of the King James Bible, John Milton grew up in a house on the same London street as the Mermaid Tavern, where Ben Jonson liked to drink. Milton wrote his tracts “The Reason of Church Government” in 1642 and “Areopagitica” in 1644, and he became secretary for foreign tongues for the Commonwealth in 1649. When he published Paradise Lost in 1667, it was reportedly hailed in the House of Commons as “the noblest poem that ever was wrote in any language or any age.”