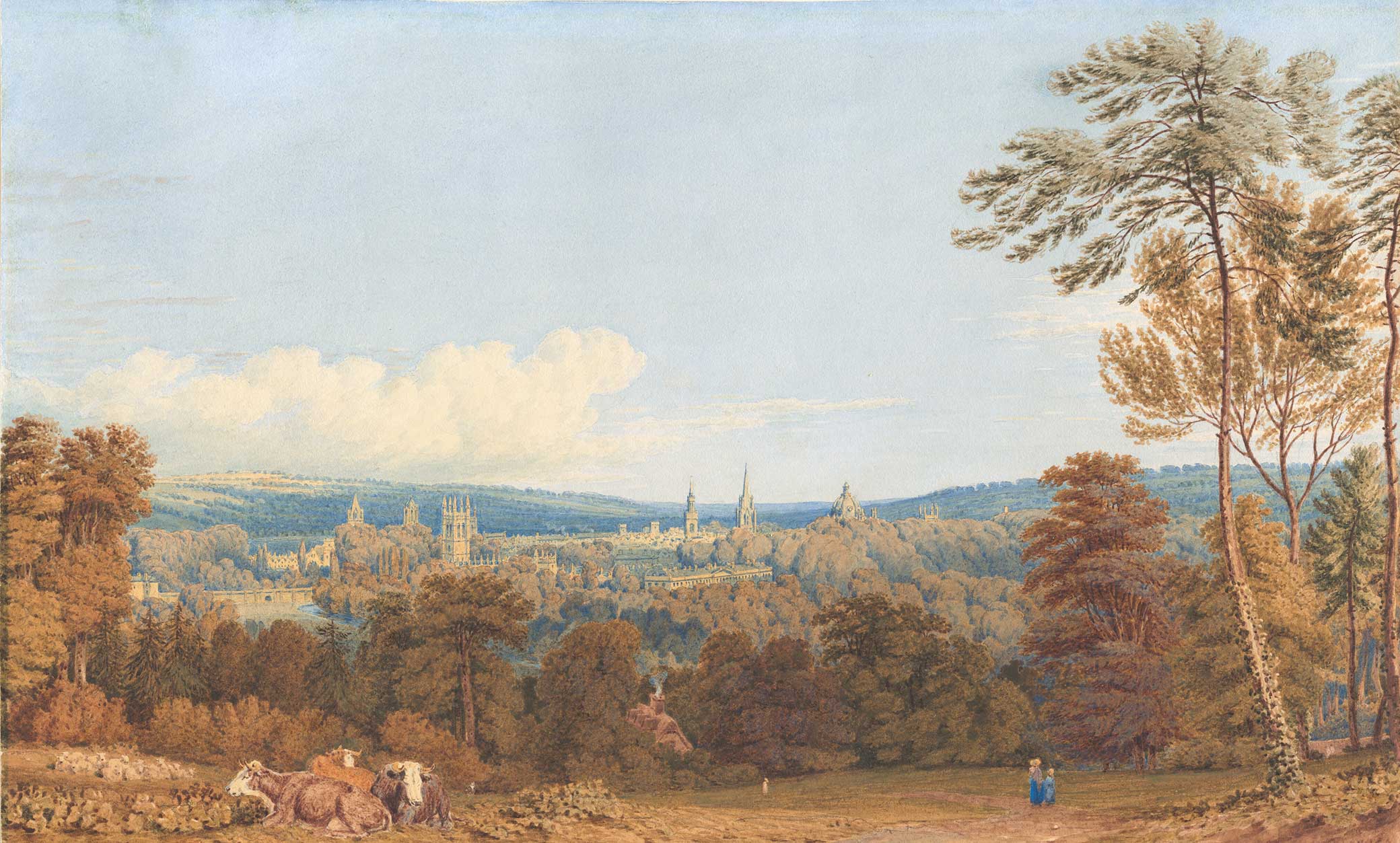 View of Oxford from Headington Hill, by William Turner of Oxford, 1830. National Gallery of Art, purchased as the gift of the Krugman Family Foundation.

For the rest of the year, Lapham’s Quarterly is running a series on the subject of history and the pleasures, pain, and knowledge that can be found from studying it. For more than fifty issues, contributors from antiquity to the present day have participated in millennia-spanning conversations on themes including friendship, happiness, death, and the future. But what did they make of the idea of studying the past in the first place? Check back every Thursday from now until the end of the year to read the latest.

In Thomas Hardy’s 1887 novel The Woodlanders, a wellborn doctor is overcome by loneliness after moving to a secluded village. The village’s longtime residents do not despair at their isolation because they enjoy the comfort of “old association—an almost exhaustive biographical or historical acquaintance with every object, animate and inanimate, within the observer’s horizon.” To be a happy villager, one must absorb a fair amount of history:

He must know all about those invisible ones of the days gone by, whose feet have traversed the fields which look so gray from his windows; recall whose creaking plow has turned those sods from time to time; whose hands planted the trees that form a crest to the opposite hill; whose horses and hounds have torn through that underwood; what birds affect that particular brake; what domestic dramas of love, jealousy, revenge, or disappointment have been enacted in the cottages, the mansion, the street, or on the green.

As a child growing up in Dorset, in southwestern England, Hardy learned about his district by walking between towns and through the countryside, meeting neighbors and noticing the marks left on the landscape by past inhabitants, including Neolithic earthworks and Roman fortifications.

The other strands of his historical education came through reading. He started learning Latin at the age of twelve and studied the histories of Eutropius and Julius Caesar. Hardy’s family could not afford university fees, and his formal learning ended in 1856 when he was apprenticed at sixteen to an architect in Dorchester. He continued reading classical literature on his own, hoping to matriculate at Cambridge University when he had enough money to support himself. He did his studying between five and eight in the morning before leaving for the office, teaching himself ancient Greek and reading Horace, Ovid, and Homer’s Iliad.

Still lacking the necessary funds, Hardy gave up the idea of higher education in the summer of 1866. “It seems absurd to live on now with such a remote object in view,” he wrote in a letter to his sister Mary. Twenty-nine years later he published his final novel, Jude the Obscure, about the autodidact and stonemason Jude Fawley, who dreams of attending Christminster, a fictionalized version of Oxford University.

After teaching himself Latin and Greek, Jude moves to the town of Christminster, where his personal and academic aims are quickly frustrated: he falls in love with his cousin Sue Bridehead, who eventually marries another man, and discovers that scholarships are awarded only to those who can afford rigorous private tutoring. He writes to several college masters asking for advice but begins to meditate on the paths of learning available to him beyond academic institutions. 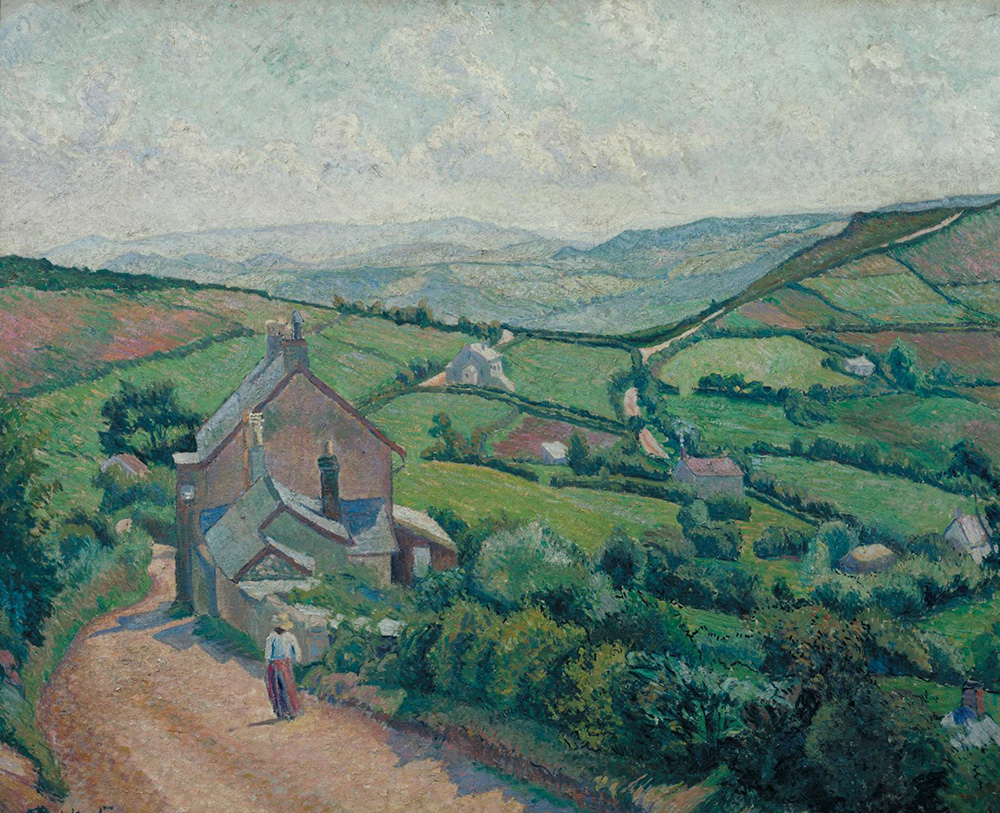 He always remembered the appearance of the afternoon on which he awoke from his dream. Not quite knowing what to do with himself, he went up to an octagonal chamber in the lantern of a singularly built theater that was set amid this quaint and singular city. It had windows all around, from which an outlook over the whole town and its edifices could be gained. Jude’s eyes swept all the views in succession, meditatively, mournfully, yet sturdily. Those buildings and their associations and privileges were not for him. From the roof of the great library, into which he hardly ever had time to enter, his gaze traveled on to the varied spires, halls, gables, streets, chapels, gardens, quadrangles, which composed the ensemble of this unrivaled panorama. He saw that his destiny lay not with these but among the manual toilers in the shabby purlieu which he himself occupied, unrecognized as part of the city at all by its visitors and panegyrists, yet without whose denizens the hard readers could not read, nor the high thinkers live.

Descending to the streets, he went listlessly along till he arrived at an inn and entered it. Here he drank several glasses of beer in rapid succession, and when he came out it was night. By the light of the flickering lamps he rambled home to supper and had not long been sitting at table when his landlady brought up a letter that had just arrived for him. She laid it down as if impressed with a sense of its possible importance, and on looking at it, Jude perceived that it bore the embossed stamp of one of the colleges whose heads he had addressed. “One—at last!” cried Jude.

The communication was brief and not exactly what he had expected, though it really was from the master in person. It ran thus:

I have read your letter with interest; and, judging from your description of yourself as a workingman, I venture to think that you will have a much better chance of success in life by remaining in your own sphere and sticking to your trade than by adopting any other course. That, therefore, is what I advise you to do.

This terribly sensible advice exasperated Jude. He had known all that before. He knew it was true. Yet it seemed a hard slap after ten years of labor, and its effect upon him just now was to make him rise recklessly from the table and, instead of reading as usual, to go downstairs and into the street. He stood at a bar and tossed off two or three glasses then unconsciously sauntered along till he came to a spot called The Fourways in the middle of the city, gazing abstractedly at the groups of people like one in a trance till, coming to himself, he began talking to the policeman fixed there.

That officer yawned, stretched out his elbows, elevated himself an inch and a half on the balls of his toes, smiled, and, looking humorously at Jude, said, “You’ve had a wet, young man.”

“No; I’ve only begun,” he replied cynically.

Whatever his wetness, his brains were dry enough. He only heard in part the policeman’s further remarks, having fallen into thought on what struggling people like himself had stood at that crossway, whom nobody ever thought of now. It had more history than the oldest college in the city. It was literally teeming, stratified, with the shades of human groups who had met there for tragedy, comedy, farce, real enactments of the intensest kind. At Fourways men had stood and talked of Napoleon, the loss of America, the execution of King Charles, the burning of the martyrs, the Crusades, the Norman Conquest, possibly of the arrival of Caesar. Here the two sexes had met for loving, hating, coupling, parting; had waited, had suffered, for each other; had triumphed over each other; cursed each other in jealousy, blessed each other in forgiveness.

He began to see that the town life was a book of humanity infinitely more palpitating, varied, and compendious than the gown life. These struggling men and women before him were the reality of Christminster, though they knew little of Christ or Minster. That was one of the humors of things. The floating population of students and teachers who did know both in a way were not Christminster in a local sense at all.

He looked at his watch, and, in pursuit of this idea, he went on till he came to a public hall where a promenade concert was in progress. Jude entered and found the room full of shop youths and girls, soldiers, apprentices, boys of eleven smoking cigarettes, and light women of the more respectable and amateur class. He had tapped the real Christminster life. A band was playing, and the crowd walked about and jostled each other, and every now and then a man got upon a platform and sang a comic song.

The spirit of Sue seemed to hover around him and prevent his flirting and drinking with the frolicsome girls who made advances—wistful to gain a little joy. At ten o’clock he came away, choosing a circuitous route homeward to pass the gates of the college whose head had just sent him the note.

The gates were shut, and, by an impulse, he took from his pocket a lump of chalk, which as a workman he usually carried there, and wrote along the wall:

I have understanding as well as you; I am not inferior to you: yea, who knoweth not such things as these?
—Job 12:3

The eldest of four children growing up in Dorset in the 1840s, Thomas Hardy apprenticed to a local architect in 1856 and worked as a draftsman in London in 1862. While visiting a church in Cornwall in 1870, he met and fell in love with his future wife, immortalized in his novel A Pair of Blue Eyes as well as in the poem “Beeny Cliff”: “O the opal and the sapphire of that wandering western sea, / And the woman riding high above with bright hair flapping free.” Hardy published Jude the Obscure in 1895.