When Ivan Andreitch Laevsky went to see his friend Samoylenko, the army doctor, to ask for some money, he found Von Koren in the drawing room. The zoologist had just arrived for dinner, and, as usual, was turning over the album and scrutinizing the gentlemen in top hats and the ladies in caps.

“How very unlucky!” thought Laevsky, seeing him. “He may be in the way. Good morning.”

“Good morning,” answered Von Koren without looking at him.

“Is Alexandr Daviditch at home?”

Laevsky went into the kitchen, but seeing from the door that Samoylenko was busy over the salad, he went back into the drawing room and sat down. He always had a feeling of awkwardness in the zoologist’s presence, and now he was afraid there would be talk about his attack of hysterics. There was more than a minute of silence. Von Koren suddenly raised his eyes to Laevsky and asked, “How do you feel after yesterday?”

“Very well indeed,” said Laevsky, flushing. “It really was nothing much…”

“Until yesterday I thought it was only ladies who had hysterics, and so at first I thought you had Saint Vitus’ dance.”

Laevsky smiled ingratiatingly and thought, “How indelicate on his part! He knows quite well how unpleasant it is for me…”

“Yes, it was a ridiculous performance,” he said, still smiling. “I’ve been laughing over it the whole morning. What’s so curious in an attack of hysterics is that you know it is absurd and are laughing at it in your heart, and at the same time you sob. In our neurotic age, we are the slaves of our nerves. They are our masters and do as they like with us. Civilization has done us a bad turn in that way…”

As Laevsky talked, he felt it disagreeable that Von Koren listened to him gravely, and looked at him steadily and attentively as though studying him; and he was vexed with himself that in spite of his dislike of Von Koren, he could not banish the ingratiating smile from his face.

“I must admit, though,” he added, “that there were immediate causes for the attack, and quite sufficient ones, too. My health has been terribly shaky of late. To which one must add boredom, constantly being hard up…the absence of people and general interests…My position is worse than a governor’s.”

“Yes, your position is a hopeless one,” answered Von Koren.

These calm, cold words, implying something between a jeer and an uninvited prediction, offended Laevsky. He was silent for a space and then asked, no longer smiling, “How do you know anything of my position?”

“You were only just speaking of it yourself. Besides, your friends take such a warm interest in you that I am hearing about you all day long.”

“What friends? Samoylenko, I suppose?”

“I would ask Alexandr Daviditch and my friends in general not to trouble so much about me.”

“Here is Samoylenko. You had better ask him not to trouble so much about you.”

“I don’t understand your tone,” Laevsky muttered, suddenly feeling as though he had only just realized that the zoologist hated and despised him and was jeering at him, and was his bitterest and most inveterate enemy.

“Keep that tone for someone else,” he said softly, unable to speak aloud for the hatred with which his chest and throat were choking.

Samoylenko came in in his shirtsleeves, crimson and perspiring from the stifling kitchen.

“Alexandr Daviditch,” said Laevsky, standing up, “though I did appeal to you to help me in a private matter, it did not follow that I released you from the obligation of discretion and respect for other people’s private affairs.”

“What’s this?” asked Samoylenko in astonishment.

“If you have no money,” Laevsky went on, raising his voice and shifting from one foot to the other in his excitement, “don’t give it. Refuse it. But why spread abroad in every backstreet that my position is hopeless and all the rest of it? I can’t endure such benevolence and friend’s assistance where there’s a shilling’s worth of talk for a hap’orth of help! You can boast of your benevolence as much as you please, but no one has given you the right to gossip about my private affairs!”

“What private affairs?” asked Samoylenko, puzzled and beginning to be angry. “If you’ve come here to be abusive, you had better clear out. You can come again afterward!”

He remembered the rule that when one is angry with one’s neighbor, one must begin to count a hundred, and one will grow calm again; and he began rapidly counting.

“I beg you not to trouble yourself about me,” Laevsky went on. “Don’t pay any attention to me, and whose business is it what I do and how I live? Yes, I want to go away. Yes, I get into debt, I drink, I am living with another man’s wife, I’m hysterical, I’m ordinary. I am not so profound as some people, but whose business is that? Respect other people’s privacy.”

“Excuse me, brother,” said Samoylenko, who had counted up to thirty-five, “but…”

“Respect other people’s individuality!” interrupted Laevsky. “This continual gossip about other people’s affairs, this sighing and groaning and everlasting prying, this eavesdropping, this friendly sympathy…damn it all! They lend me money and make conditions as though I were a schoolboy! I am treated as the devil knows what! I don’t want anything,” shouted Laevsky, staggering with excitement and afraid that it might end in another attack of hysterics. “I shan’t get away on Saturday, then,” flashed through his mind. “I want nothing. All I ask of you is to spare me your protecting care. I’m not a boy, and I’m not mad, and I beg you to leave off looking after me.”

The deacon came in and, seeing Laevsky pale and gesticulating, addressing his strange speech to the portrait of Prince Vorontsov, stood still by the door as though petrified.

“This continual prying into my soul,” Laevsky went on, “is insulting to my human dignity, and I beg these volunteer detectives to give up their spying! Enough!”

“What’s that…what did you say?” said Samoylenko, who had counted up to a hundred. He turned crimson and went up to Laevsky.

“I’m a Russian doctor, a nobleman by birth, and a civil councillor,” said Samoylenko emphatically. “I’ve never been a spy, and I allow no one to insult me!” he shouted in a breaking voice, emphasizing the last word. “Hold your tongue!”

The deacon, who had never seen the doctor so majestic, so swelling with dignity, so crimson, and so ferocious, shut his mouth, ran out into the entry, and there exploded with laughter.

As though through a fog, Laevsky saw Von Koren get up and, putting his hands in his trouser pockets, stand still in an attitude of expectancy, as though waiting to see what would happen. This calm attitude struck Laevsky as insolent and insulting to the last degree.

Laevsky, who did not by now remember what his words were, answered, “Leave me alone! I ask for nothing. All I ask is that you and German upstarts of Jewish origin should let me alone! Or I shall take steps to make you! I will fight you!” 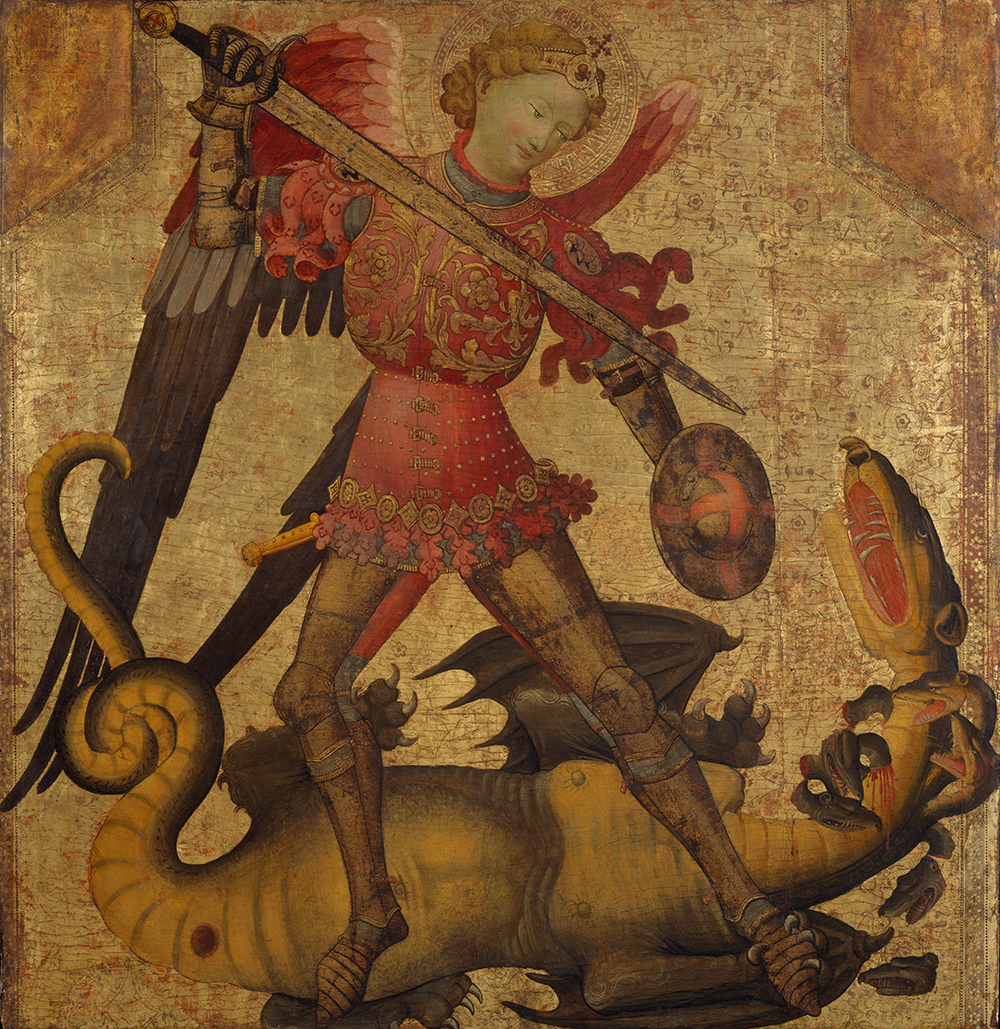 Saint Michael and the Dragon, by an unknown Valencian painter, c. 1405. © The Metropolitan Museum of Art, Rogers Fund, 1912.

“Now we understand,” said Von Koren, coming from behind the table. “Mr. Laevsky wants to amuse himself with a duel before he goes away. I can give him that pleasure. Mr. Laevsky, I accept your challenge.”

“A challenge,” said Laevsky, in a low voice, going up to the zoologist and looking with hatred at his swarthy brow and curly hair. “A challenge? By all means! I hate you! I hate you!”

“Delighted. Tomorrow morning early. I leave all details to your taste. And now, clear out!”

“I hate you,” Laevsky said softly, breathing hard. “I have hated you a long while! A duel! Yes!”

“Get rid of him, Alexandr Daviditch, or else I’m going,” said Von Koren. “He’ll bite me.”

Von Koren’s cool tone calmed the doctor; he seemed suddenly to come to himself, to recover his reason; he put both arms around Laevsky’s waist and, leading him away from the zoologist, muttered in a friendly voice that shook with emotion, “My friends…dear, good…you’ve lost your tempers and that’s enough…and that’s enough, my friends.”

Hearing his soft, friendly voice, Laevsky felt that something unheard of, monstrous, had just happened to him, as though he had been nearly run over by a train; he almost burst into tears, waved his hand, and ran out of the room.

“To feel that one is hated, to expose oneself before the man who hates one, in the most pitiful, contemptible, helpless state. My God, how hard it is!” he thought a little while afterward as he sat in the pavilion, feeling as though his body were scarred by the hatred of which he had just been the object.

Cold water with brandy in it revived him. He vividly pictured Von Koren’s calm, haughty face; and heavy, passionate, hungry hatred rankled in his breast and clamored for satisfaction. In his thoughts he felled Von Koren to the ground and trampled him underfoot. He remembered to the minutest detail all that had happened and wondered how he could have smiled ingratiatingly to that insignificant man, and how he could care for the opinion of wretched petty people whom nobody knew, living in a miserable little town that was not, it seemed, even on the map, and of which not one decent person in Petersburg had heard.

From The Duel. After graduating from Moscow University with a medical degree in 1884, Chekhov began publishing short comic stories to support his family but found himself criticized by the literary community for remaining apolitical and uninterested in social issues; one review called him a priest of “unprincipled writing.” By 1888 he had made a turn, decrying “these morbid times” when “even the best of men sit with their arms folded and justify their indolence and depravity.” Three years later, having turned toward tragic and politically motivated work, he wrote and published this novella.