Maligned by his contemporaries as one of the “cockney” poets because he had been born the son of a livery stable keeper, John Keats went on to publish fifty-four poems, among them Endymion, “Ode on a Grecian Urn,” and “Ode to a Nightingale.” One autumn evening several weeks before his twenty-first birthday in 1816, Keats was introduced to George Chapman’s translation of Homer by a friend; at ten o’clock the next morning, the friend received “On First Looking into Chapman’s Homer,” considered among the finest English sonnets. He toured the Lake District in 1818, during which time signs of tuberculosis manifested, and by 1820 he had difficulty writing because of the disease. He died in Rome at the age of twenty-five in 1821. 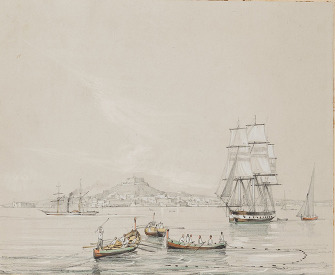 A Letter from Quarantine

“A person in my state of health should not have such miseries to bear.” More

“Then felt I like some watcher of the skies / When a new planet swims into his ken.”More

John Keats asks for a bite.More

“Was it a vision, or a waking dream?”More

“Just opposite, an island of the sea, / There came enchantment with the shifting wind, / That did both drown and keep alive my ears,” wrote John Keats in Hyperion. It was published in a collection of poems in 1820; Keats died the following year. In 1822 Percy Bysshe Shelley, returning from a visit to Lord Byron, drowned after his schooner, the Don Juan, capsized. His body washed up on the Tuscan shore a few days later. In his pocket was a copy of Keats’ poems.