The lawyer, Broadway songwriter, poet, and civil rights activist worked on Theodore Roosevelt’s 1904 presidential campaign, later serving as U.S. consul at Puerto Cabello, Venezuela, and at Corinto, Nicaragua. He anonymously published his only novel, The Autobiography of an Ex-Colored Man, in 1912, joined the staff of the NAACP in 1916, and was a leading member of the Harlem Renaissance in the 1920s. He died in 1938 in a car accident in Maine. 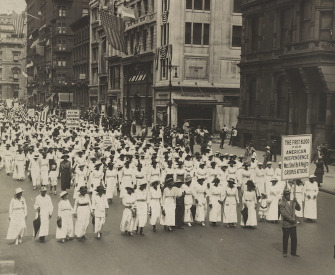 Fighting in Defense of Their Lives

Clad in Robes of Spotless White

She is not dead, she’s resting in the bosom of Jesus.More