I want to share with you something I’ve learned. I’ll draw it on the blackboard behind me so you can follow more easily [draws a vertical line on the blackboard]. This is the G–I axis: good fortune–ill fortune. Death and terrible poverty, sickness down here—great prosperity, wonderful health up there. Your average state of affairs here in the middle [points to bottom, top, and middle of line respectively].

This is the B–E axis. B for beginning, E for entropy. Okay. Not every story has that very simple, very pretty shape that even a computer can understand [draws horizontal line extending from middle of G–I axis].

Now let me give you a marketing tip. The people who can afford to buy books and magazines and go to the movies don’t like to hear about people who are poor or sick, so start your story up here [indicates top of the G–I axis]. You will see this story over and over again. People love it, and it is not copyrighted. The story is “Man in Hole,” but the story needn’t be about a man or a hole. It’s: somebody gets into trouble, gets out of it again [draws line A]. It is not accidental that the line ends up higher than where it began. This is encouraging to readers. 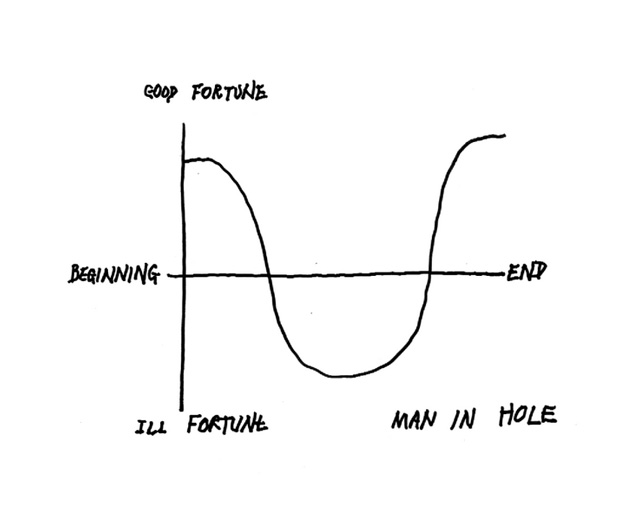 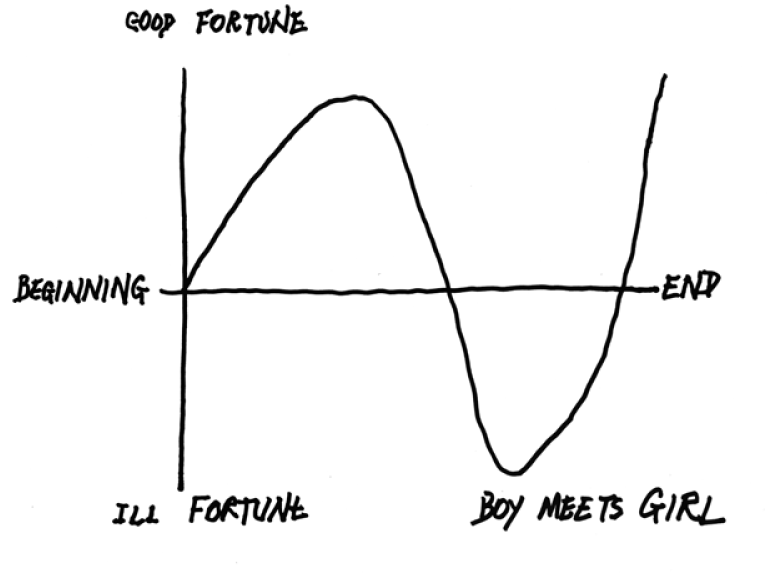 Now, I don’t mean to intimidate you, but after being a chemist as an undergraduate at Cornell, after the war I went to the University of Chicago and studied anthropology, and eventually I took a masters degree in that field. Saul Bellow was in that same department, and neither one of us ever made a field trip. Although we certainly imagined some. I started going to the library in search of reports about ethnographers, preachers, and explorers—those imperialists—to find out what sorts of stories they’d collected from primitive people. It was a big mistake for me to take a degree in anthropology anyway, because I can’t stand primitive people—they’re so stupid. But anyway, I read these stories, one after another, collected from primitive people all over the world, and they were dead level, like the B–E axis here. So all right. Primitive people deserve to lose with their lousy stories. They really are backward. Look at the wonderful rise and fall of our stories.

One of the most popular stories ever told starts down here [begins line C below B–E axis]. Who is this person who’s despondent? She’s a girl of about fifteen or sixteen whose mother had died, so why wouldn’t she be low? And her father got married almost immediately to a terrible battle-axe with two mean daughters. You’ve heard it?

There’s to be a party at the palace. She has to help her two stepsisters and her dreadful stepmother get ready to go, but she herself has to stay home. Is she even sadder now? No, she’s already a broken-hearted little girl. The death of her mother is enough. Things can’t get any worse than that. So okay, they all leave for the party. Her fairy godmother shows up [draws incremental rise], gives her pantyhose, mascara, and a means of transportation to get to the party.

And when she shows up she’s the belle of the ball [draws line upward]. She is so heavily made up that her relatives don’t even recognize her. Then the clock strikes twelve, as promised, and it’s all taken away again [draws line downward]. It doesn’t take long for a clock to strike twelve times, so she drops down. Does she drop down to the same level? Hell, no. No matter what happens after that she’ll remember when the prince was in love with her and she was the belle of the ball. So she poops along, at her considerably improved level, no matter what, and the shoe fits, and she becomes off-scale happy [draws line upward and then infinity symbol]. 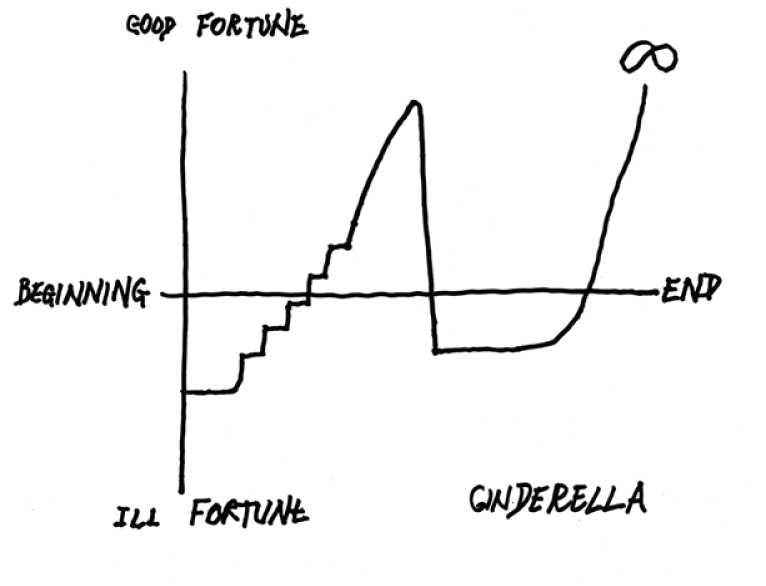 Now there’s a Franz Kafka story [begins line D toward bottom of G–I axis]. A young man is rather unattractive and not very personable. He has disagreeable relatives and has had a lot of jobs with no chance of promotion. He doesn’t get paid enough to take his girl dancing or to go to the beer hall to have a beer with a friend. One morning he wakes up, it’s time to go to work again, and he has turned into a cockroach [draws line downward and then infinity symbol]. 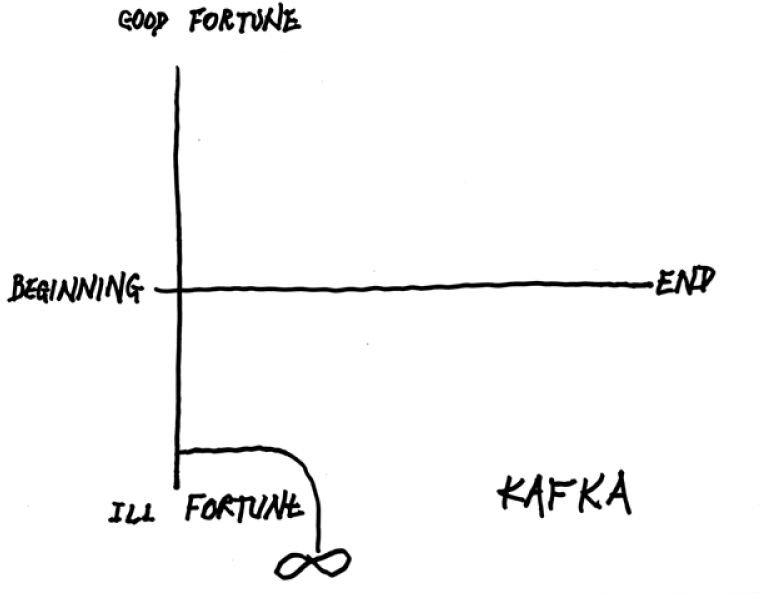 The question is, does this system I’ve devised help us in the evaluation of literature? Perhaps a real masterpiece cannot be crucified on a cross of this design. How about Hamlet? It’s a pretty good piece of work I’d say. Is anybody going to argue that it isn’t? I don’t have to draw a new line, because Hamlet’s situation is the same as Cinderella’s, except that the sexes are reversed.

His father has just died. He’s despondent. And right away his mother went and married his uncle, who’s a bastard. So Hamlet is going along on the same level as Cinderella when his friend Horatio comes up to him and says, “Hamlet, listen, there’s this thing up in the parapet, I think maybe you’d better talk to it. It’s your dad.” So Hamlet goes up and talks to this, you know, fairly substantial apparition there. And this thing says, “I’m your father, I was murdered, you gotta avenge me, it was your uncle did it, here’s how.”

Well, was this good news or bad news? To this day we don’t know if that ghost was really Hamlet’s father. If you have messed around with Ouija boards, you know there are malicious spirits floating around, liable to tell you anything, and you shouldn’t believe them. Madame Bla­vatsky, who knew more about the spirit world than anybody else, said you are a fool to take any apparition seriously, because they are often malicious and they are frequently the souls of people who were murdered, were suicides, or were terribly cheated in life in one way or another, and they are out for revenge.

So we don’t know whether this thing was really Hamlet’s father or if it was good news or bad news. And neither does Hamlet. But he says okay, I got a way to check this out. I’ll hire actors to act out the way the ghost said my father was murdered by my uncle, and I’ll put on this show and see what my uncle makes of it. So he puts on this show. And it’s not like Perry Mason. His uncle doesn’t go crazy and say, “I-I-you got me, you got me, I did it, I did it.” It flops. Neither good news nor bad news. After this flop Hamlet ends up talking with his mother when the drapes move, so he thinks his uncle is back there and he says, “All right, I am so sick of being so damn indecisive,” and he sticks his rapier through the drapery. Well, who falls out? This windbag, Polonius. This Rush Limbaugh. And Shakespeare regards him as a fool and quite disposable.

You know, dumb parents think that the advice that Polonius gave to his kids when they were going away was what parents should always tell their kids, and it’s the dumbest possible advice, and Shakespeare even thought it was hilarious.

“Neither a borrower nor a lender be.” But what else is life but endless lending and borrowing, give and take?

“This above all, to thine own self be true.” Be an egomaniac!

Neither good news nor bad news. Hamlet didn’t get arrested. He’s prince. He can kill anybody he wants. So he goes along, and finally he gets in a duel, and he’s killed. Well, did he go to heaven or did he go to hell? Quite a difference. Cinderella or Kafka’s cockroach? I don’t think Shakespeare believed in a heaven or hell any more than I do. And so we don’t know whether it’s good news or bad news.

I have just demonstrated to you that Shakespeare was as poor a storyteller as any Arapaho.

But there’s a reason we recognize Hamlet as a masterpiece: it’s that Shakespeare told us the truth, and people so rarely tell us the truth in this rise and fall here [indicates blackboard]. The truth is, we know so little about life, we don’t really know what the good news is and what the bad news is. 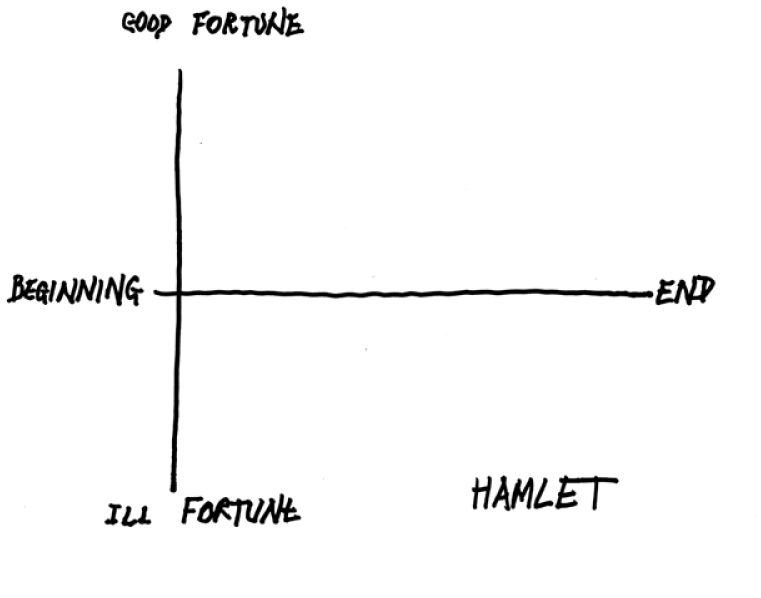 And if I die—God forbid—I would like to go to heaven to ask somebody in charge up there, “Hey, what was the good news and what was the bad news?”

© 2005 by Kurt Vonnegut. Used with permission of Seven Stories Press.

From “Here is a lesson in creative writing.” After surviving the firebombing of Dresden as a POW in World War II, the novelist, satirist, and essayist found work as a reporter at the Chicago News Bureau in the late forties. He published Player Piano in 1952 and Cat’s Cradle in 1963 before winning wide acclaim in 1969 for Slaughterhouse-Five, which drew upon his Dresden experiences. He died in New York in 2007 at the age of eighty-four.

Through the Eye of a Needle

Packing light for the afterlife.More