This day, Saturday, July 18, summoned by the Holy Office to appear before the Holy Tribunal, Paolo Caliari Veronese, dwelling in the parish of San Samuele, gave his name and Christian name as above when questioned. Questioned as to his calling, he replied, “I paint and make figures.”

Q: Do you know for what reason you were summoned hither?

Q: Can you imagine the reason?

Q: Say what you suppose.

A: I think it to be as I was told by the reverend fathers, or rather by the prior of SS. Giovanni e Paolo, whose name I do not know, who said to me that he had been hither [to the tribunal of the Inquisition] and that Your Illustrious Lordships had instructed him that he should cause Mary Magdalene to be painted [in Veronese’s picture] instead of a dog. And I answered him, that I would willingly have done this and anything else for my honor and that of the picture, but that I did not feel that such a figure of the Magdalene would have a good appearance there, for many reasons, which I will declare whenever the occasion is given to me.

Q: What is this picture of which you have spoken?

A: It is a picture of the Last Supper, taken by Jesus Christ with his Apostles in the house of Simon.

Q: Where is this picture?

A: In the refectory of the Monastery of SS. Giovanni e Paolo.

Q: Is it painted on the wall, on wood, or on canvas?

Q: How many feet is it in height?

A: It may be seventeen feet.

A: Some thirty-nine feet.

Q: Have you painted Servants at the Lord’s Supper?

Q: Say how many persons and the actions of each of them.

A: The landlord of the inn, Simon—further, below this figure I put a carver, I supposed come for his own enjoyment to watch how matters were going at the table. There are many figures there which I cannot call to mind, because it is long since I finished that picture.

Q: What is intended by the figure of the man whose nose is bleeding?

A: I intended him for a servant, whose nose has been set bleeding by some mischance.

Q: And what is meant by the armed man, clothed after the German fashion, and with a halberd in his hand?

A: Of that I should need to speak at more length!

A: We painters allow ourselves the same liberties as do poets and madmen, and thus I made these two halberdiers—one of them drinking, the other eating—at the foot of the stairway, yet both ready to do their service. For it seemed to me to be fitting that the master of the house, being rich and a great lord—as I have been told—should have such attendants.

Q: And the fellow dressed like a jester, with a parrot perched on his fist—to what end did you portray him?

A: As an ornament, according to custom.

Q: And who are those at the Lord’s table?

A: The twelve Apostles.

Q: What is St. Peter doing, that is, the first of them?

A: He is dividing the lamb to pass it to the other end of the table.

Q: And the other man, beside him?

A: He holds a dish ready to receive what St. Peter will give him.

Q: Tell us what is being done by him that comes next.

A: That one is picking his teeth with a fork.

Q: Who do you believe was really at that Supper?

A: I believe that Christ was there with his Apostles, but if any space remains in the picture, I adorn it with other figures of my own invention.

Q: Did you receive order from anyone to paint Germans, jesters, and the like in this picture?

A: No, sirs. But I received order to adorn the picture as I thought fit, and I saw that it was a large one and could hold many figures.

Q: Is it not for you painters to add to your pictures such figures as are fitting and in keeping with the subject and with the principal personages? Or do you follow your own pleasure and imagining, without restraint or judgment?

A: I make my paintings with befitting consideration, as my mind can understand the matter.

Q: Does it appear fitting to you, that at the Last Supper of Our Lord there should be introduced jesters, drunkards, Germans, dwarfs, and suchlike scurrility?

Q: Do you not know that in Germany and other places infested with heresy it is the custom, by means of various paintings full of scurrility and other such inventions, to curse and throw scorn upon the Holy Catholic Church, to teach evil doctrines to the foolish and ignorant people?

A: Sir, that is indeed evil, yet I must repeat what I said—that I am compelled to follow what has been done by those greater than me.

Q: What has been done by those greater than you? Such things as these, perchance?

A: In the pope’s chapel in Rome, Michelangelo depicted Our Lord Jesus Christ, his Mother, St. John, St. Peter, and the heavenly court, all naked, even the Virgin Mary, and amid actions that display little reverence.

Q: Do you not know that in painting the Last Judgment, at which it is not to be supposed that clothing will be worn, there is no occasion to paint garments? But in those figures there is naught but what comes of the spirit—there are no jesters, dogs, weapons, or such buffooneries. And do you deem that this example or any other shows that you did well to paint your picture in this manner, and do you maintain that the picture is proper and fitting?

A: Illustrious sir, I do not seek to defend it, but my intent was to do well. And I did not reflect on the matter much, believing that I did no wrong, the more since these figures of buffoons are outside the place where Our Lord is.

When these things had been said, the judges decreed that the said Paolo must correct his picture within three months from the day of this reprimand, in accordance with the judgment and decision of the Holy Tribunal, the whole at the cost of the said Paolo himself.

From the transcript of the inquisition of Paolo Veronese. After the inquisitors ruled that his version of the Last Supper took too many liberties, Veronese made minor alterations and changed the painting’s title to Feast in the House of Levi. Known for his colorful canvases crowded with figures, he was one of the most influential painters of the sixteenth-century Venetian School. 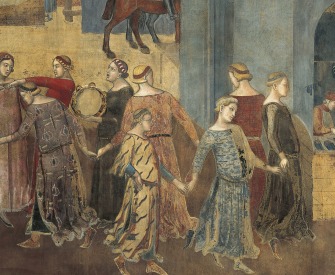 John Milton on living under a cloud of unknowing.More