We were camped between the White River and a place known as Crow Butte. As usual, everyone in camp seemed to be having a good time. One day I observed a great many horses near our camp. They were such beautiful animals, sleek and fat. I asked my stepmother where the horses came from. She told me the Great Father at Washington had sent them to be given to us. I was very happy, thinking I should get one, as I was now regarded as a young man.

A chief from each band was chosen to distribute the horses to his own people. As the name of each chief was called, he was given as many small sticks as there were horses allotted to his band. My father was called, and he received his bunch of sticks. Then he told all the young men who wanted horses to come to his tepee. As each man came in, he was given a stick, which signified that he was to receive a horse from my father when the animals had been turned over to the camp.

After he had given out all the sticks, there were still two young men without horses. But Father did not let them go away disappointed. He picked up two sticks and gave one to each man. He then said he would give them each a horse from his own herd, as he had already allotted all the animals that the government was to present them.

Although we had nice ponies in our band, they were nothing compared to the horses the government sent. My father would have liked one of them himself, but he was a chief and was obliged to look out for his people first. How different from the methods of the “big man” among the whites of this day and age! Before he gets in office he is ready to promise anything and everything to those who can put him there by their votes. But do they keep their promises? Well, I should say not! After they are elected, the first thing they do is to feather their own nests and that of their own families. 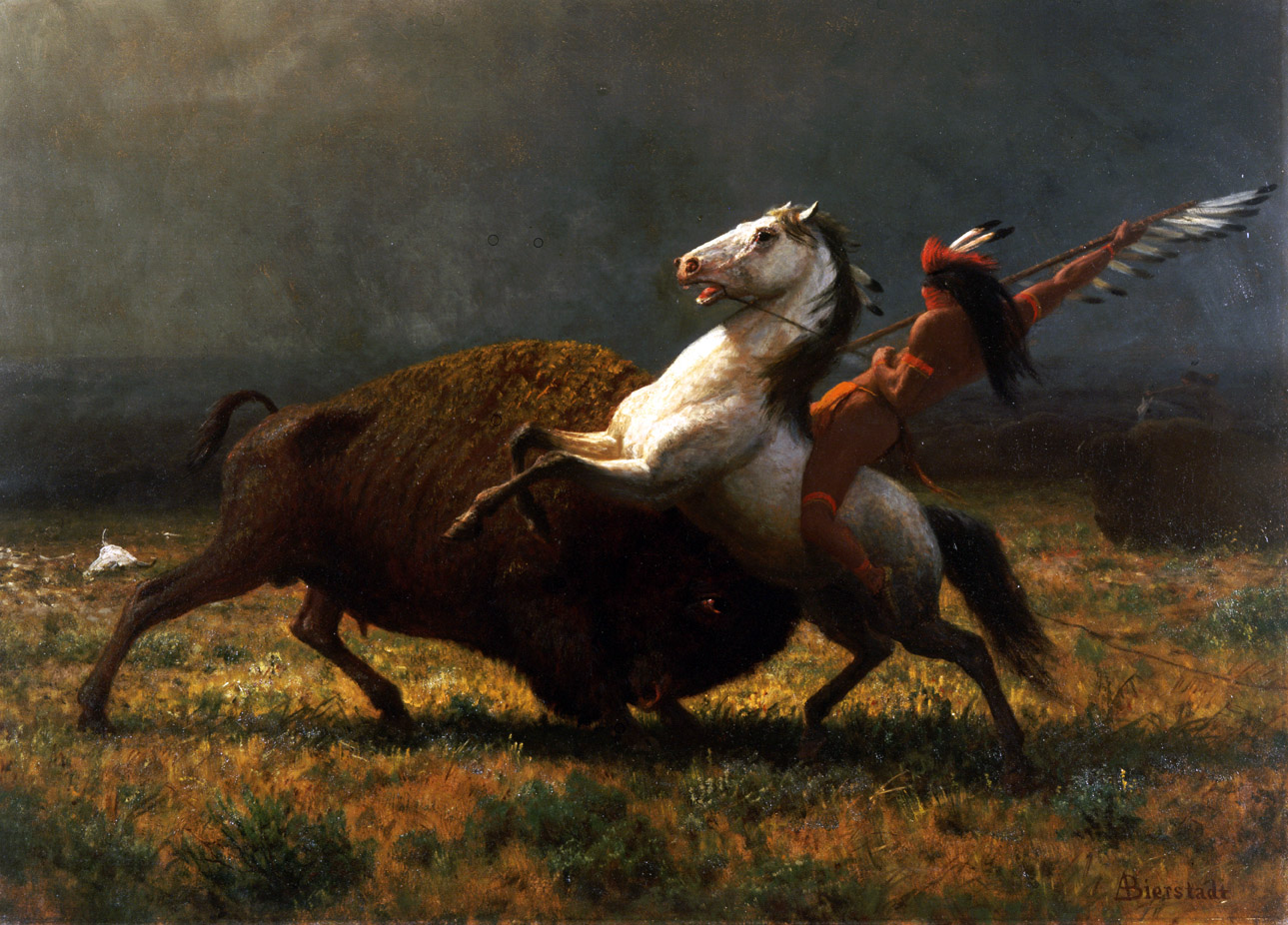 The Last of the Buffalo, by Albert Bierstadt, 1888. Photo: Christie’s Images © The Bridgeman Art Library.

But the Indian chief, without any education, was at least honest. When anything was sent to his band, they got it. His family did not come first. He received no salary. In case of war he was always found at the front, but when it came to receiving gifts, his place was in the rear. There was no handshaking, smiling, and “glad-handing,” which meant nothing. The chief was dignified and sincere.

One day we boys heard some of the men talking about going to the agency. They said the government had sent some spotted buffalo for the Indians. This was the name the Indians gave to the cows, there being no word in the Sioux tongue for the white man’s cattle. Our own wild buffalo had been disappearing very rapidly, as the white people had been killing them as fast as possible. We were very happy to learn that we were to receive more meat, this being our main diet. We had heard about these spotted buffalo, but had never seen them.

So we got on our ponies and rode over to the agency with some of the men. What a terrible odor met us! It was awful! We had to hold our noses. Then I asked my father what was the matter around there, as the stench was more than I could stand. He told me it was the odor of the spotted buffalo. Then I asked him if we were going to be obliged to eat those terrible animals. “The white people eat them,” was his reply.

Now we had several white people around us, but they were all bald headed. I began to wonder if they got that way from eating those vile-smelling cattle. I then recalled that buzzards were bald headed, and they lived on carrion, and I began to feel sorry for the white people who had to live on such stuff.

Man is merely a more perfect animal than the rest. He reasons better.

Each man was called to receive his cattle, and as they were driven out of the corral they were shot down. Here and there, all about, one could see cows lying where they had been shot down, as they did not care to drive them near their homes. They skinned the cow, cutting out the tenderest parts, and roasted it right there. This roasting killed most of the odor. Then they took the skin and traded it off for calicoes and paints. If they happened to cut the tail off while skinning the animal, and brought it to the trader later, he exchanged some candy for it, to give to the children. The Indians soon “wised up” to this, and thereafter demanded something for the tail, whether it was on the hide or off it.

Did you ever stop to think of the differ-ence there is in meat that is killed while in a contented state, and meat that is carried in trains day after day on the hoof? Some of these poor animals stand so closely together in boxcars that they have no room even to lie down and get rested, and if they do, they are poked in the ribs by men on the cars just for the purpose of keeping the animals on their feet. We knew the difference—which was the reason we could not eat this sort of meat when we first began to receive it.

From My People the Sioux. Born to Chief Standing Bear and Pretty Face in present-day South Dakota in the 1860s, the author attended the Carlisle Indian School in Pennsylvania, where he selected his first name from a list on a chalkboard. “I took the pointer,” he recalled, “and acted as if I were about to touch an enemy.” Luther served as an interpreter and chaperone in Buffalo Bill’s Wild West Show in 1902, became a Sioux chief in 1905, published his autobiography in 1928, and, along with athlete Jim Thorpe, formed the Indian Actors Association in 1936.