Some years ago, we had at our Harvard graduate school a very brilliant student of philosophy, who, after leaving us and supporting himself by literary labor for three years, received an appointment to teach English literature at a sister institution of learning. The governors of this institution, however, had no sooner communicated the appointment than they made the awful discovery that they had enrolled upon their staff a person who was unprovided with the Ph.D. degree. The man in question had been satisfied to work at philosophy for her own sweet (or bitter) sake, and had disdained to consider that an academic bauble should be his reward.

His appointment had thus been made under a misunderstanding. He was not the proper man; and there was nothing to do but to inform him of the fact. It was notified to him by his new president that his appointment must be revoked, or that a Harvard doctor’s degree must forthwith be procured.

Although it was already the spring of the year, our subject, being a man of spirit, took up the challenge, turned his back upon literature (which in view of his approaching duties might have seemed his more urgent concern), and spent the weeks that were left him in writing a metaphysical thesis and grinding his psychology, logic, and history of philosophy up again, so as to pass our formidable ordeals.

When the thesis came to be read by our committee, we could not pass it. Brilliancy and originality by themselves won’t save a thesis for the doctorate; it must also exhibit a heavy technical apparatus of learning, and this our candidate had neglected to bring to bear. So, telling him that he was temporarily rejected, we advised him to pad out the thesis properly and return with it next year, at the same time informing his new president that this signified nothing as to his merits, that he was of ultra-Ph.D. quality, and one of the strongest men with whom we had ever had to deal.

To our surprise we were given to understand in reply that the quality per se of the man signified nothing in this connection, and that three magical letters were the thing seriously required. The college had always gloried in a list of faculty members who bore the Doctor’s title, and to make a gap in the galaxy and admit a common fox without a tail would be a degradation impossible to be thought of. We wrote again, pointing out that a Ph.D. in philosophy would prove little anyhow as to one’s ability to teach literature; we sent separate letters in which we outdid each other in eulogy of our candidate’s powers, for indeed they were great. And at last, mirabile dictu, our eloquence prevailed. He was allowed to retain his appointment provisionally, on condition that one year later at the farthest his miserably naked name should be prolonged by the sacred appendage—the lack of which had given so much trouble to all concerned. 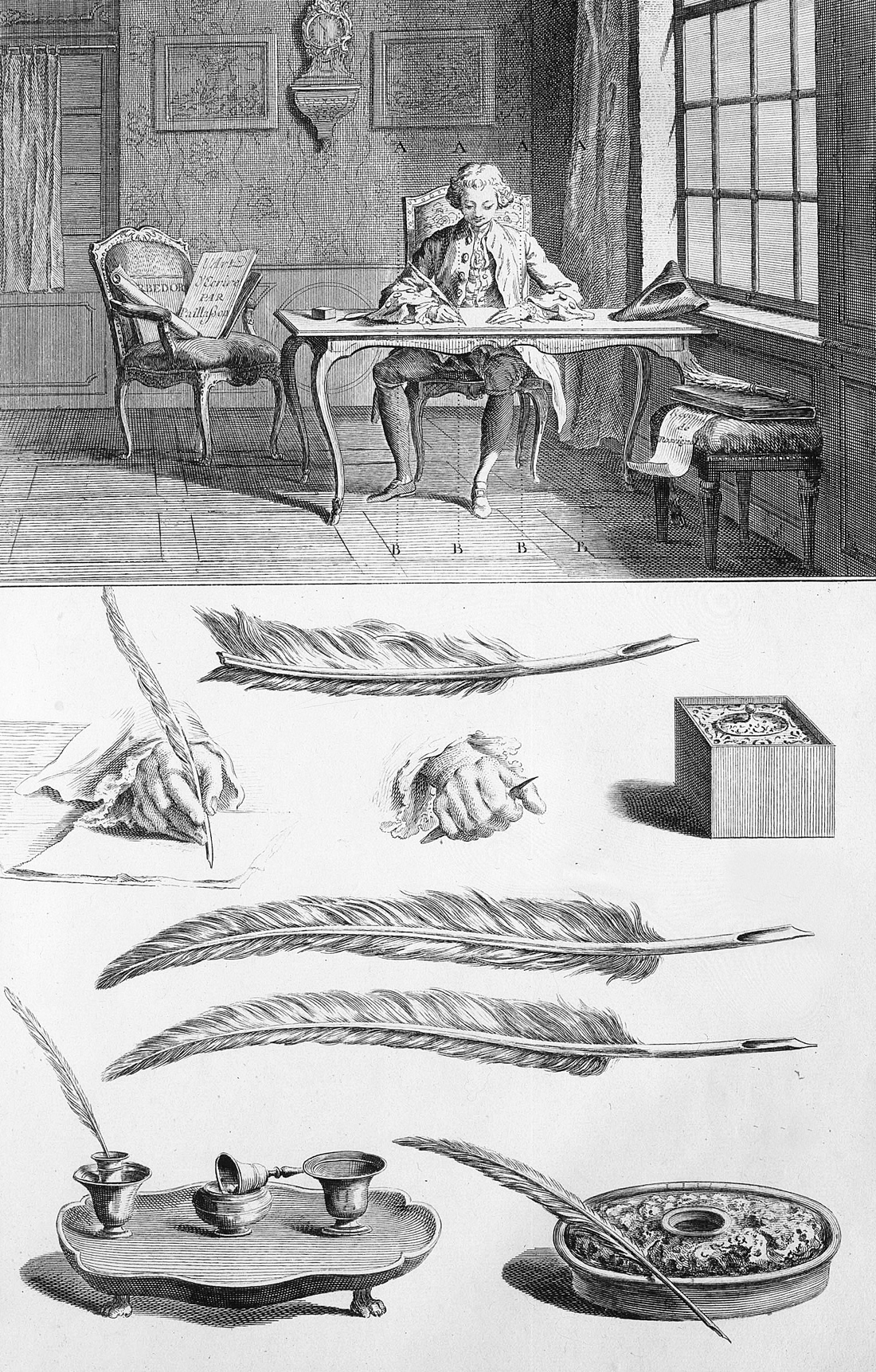 The Art of Writing (Man), from Diderot’s Encyclopédie, 1751.

Accordingly he came up here the following spring with an adequate thesis (known since in print as a most brilliant contribution to metaphysics), passed a first-rate examination, wiped out the stain, and brought his college into proper relations with the world again. Whether his teaching, during that first year, of English literature was made any better by the impending examination in a different subject is a question which I will not try to solve.

I have related this incident at such length because it is so characteristic of American academic conditions at the present day. Graduate schools still are something of a novelty and higher diplomas something of a rarity. The latter, therefore, carry a vague sense of preciousness and honor, and have a particularly “up-to-date” appearance, and it is no wonder if smaller institutions, unable to attract professors already eminent, and forced usually to recruit their faculties from the relatively young, should hope to compensate for the obscurity of the names of their officers of instruction by the abundance of decorative titles by which those names are followed on the pages of the catalogues where they appear. The dazzled reader of the list, the parent or student, says to himself, “This must be a terribly distinguished crowd—their titles shine like the stars in the firmament; Ph.D.’s, S.D.’s, and Litt.D.’s, bespangle the page as if they were sprinkled over it from a pepper caster.”

Human nature is once for all so childish that every reality becomes a sham somewhere, and in the minds of presidents and trustees the Ph.D. degree is in point of fact already looked upon as a mere advertising resource, a manner of throwing dust in the public’s eyes. “No instructor who is not a Doctor,” has become a maxim in the smaller institutions which represent demand; and in each of the larger ones which represent supply, the same belief in decorated scholarship expresses itself in two antagonistic passions: one for multiplying as much as possible the annual output of Doctors, the other for raising the standard of difficulty in passing, so that the Ph.D. of the special institution shall carry a higher blaze of distinction than it does elsewhere. Thus, we at Harvard are proud of the number of candidates whom we reject, and of the inability of men who are not distingué in intellect to pass our tests.

America is thus as a nation rapidly drifting toward a state of things in which no man of science or letters will be accounted respectable unless some kind of badge or diploma is stamped upon him, and in which bare personality will be a mark of outcast estate. It seems to me high time to rouse ourselves to consciousness and to cast a critical eye upon this decidedly grotesque tendency. Other nations suffer terribly from the Mandarin disease. Are we doomed to suffer like the rest?

Is not our growing tendency to appoint no instructors who are not also Doctors an instance of pure sham? Will anyone pretend for a moment that the doctor’s degree is a guarantee that its possessor will be successful as a teacher? Notoriously his moral, social, and personal characteristics may utterly disqualify him for success in the classroom; and of these characteristics his examination is unable to take any account whatever. Certain bare human beings will always be better candidates for a given place than all the Doctor applicants on hand; and to exclude the former by a rigid rule, and in the end to have to sift the latter by private inquiry into their personal peculiarities among those who know them, just as if they were not Doctors at all, is to stultify one’s own procedure. You may say that at least you guard against ignorance of the subject by considering only the candidates who are Doctors; but how then about making Doctors in one subject teach a different subject? This happened in the instance by which I introduced this article, and it happens daily and hourly in all our colleges. The truth is that the Doctor monopoly in teaching, which is becoming so rooted an American custom, can show no serious grounds whatsoever for itself in reason. As it actually prevails and grows in vogue among us, it is due to childish motives exclusively. In reality it is but a sham, a bauble, a dodge, whereby to decorate the catalogues of schools and colleges.

The more widespread becomes the popular belief that our diplomas are indispensable hallmarks to show the sterling metal of their holders, the more widespread these corruptions will become. We ought to look to the future carefully, for it takes generations for a national custom, once rooted, to be grown away from. All the European countries are seeking to diminish the check upon individual spontaneity which state examinations with their tyrannous growth have brought in their train. We have had to institute state examinations, too; and it will perhaps be fortunate if someday hereafter our descendants, comparing machine with machine, do not sigh with regret for old times and American freedom, and wish that the regime of the dear old bosses might be reinstalled—with plain human nature, the glad hand and the marble heart, liking and disliking, and man-to-man relations grown possible again. Meanwhile, whatever evolution our state examinations are destined to undergo, our universities at least should never cease to regard themselves as the jealous custodians of personal and spiritual spontaneity. They are indeed its only organized and recognized custodians in America today. They ought to guard against contributing to the increase of officialism and snobbery and insincerity as against a pestilence; they ought to keep truth and disinterested labor always in the foreground, treat degrees as secondary incidents, and in season and out of season make it plain that what they live for is to help men’s souls, not to decorate their persons with diplomas.

From “The Ph.D. Octopus.” At Harvard University in 1872 the elder brother of the novelist Henry James embarked on a professorial career antithetical to the specialization he abhorred, acting at different times as a professor of physiology, psychology, and philosophy. Over a span of thirty-five years he educated, among others, Theodore Roosevelt, W.E.B. Du Bois, George Santayana, and Gertrude Stein. 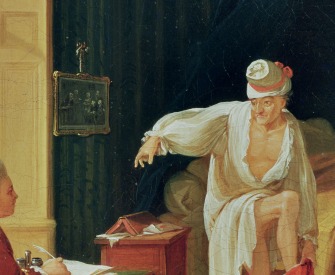