In addition to the patients and the hospitaliers selected for duty at the grotto’s pools, the only person in the little dressing room was a chaplain who kept on repeating Paters and Aves, for not even a momentary pause was allowed in the prayers. Merely a loose curtain hung before the doorway leading to the open space that the rope enclosed. The ardent, clamorous entreaties of the throng were incessantly wafted into the room, with the piercing shouts of the Capuchin, who ever repeated, “Lord, heal our sick! Lord, heal our sick!” A cold light fell from the high windows of the building, and constant dampness reigned there, with the moldy smell like that of a cellar dripping with water.

At last M. Sabathier, an invalid who had lost the use of his legs, was stripped, divested of all garments save a little apron that had been fastened about his loins for decency’s sake.

“Pray don’t plunge me,” he said. “Let me down into the water by degrees.”

In point of fact, that cold water quite terrified him. He was still wont to relate that he had experienced such a frightful chilling sensation on the first occasion that he had sworn never to go in again. According to his account, there could be no worse torture than that icy cold. And then, too, as he put it, the water was scarcely inviting; for through fear lest the output of the source should not suffice, the fathers of the grotto allowed the water of the baths to be changed only twice a day. And nearly a hundred patients being dipped in the same water, it can be imagined what a terrible soup the latter at last became. All manner of things were found in it, so that it was like a frightful consommé of all ailments, a field of cultivation for every kind of poisonous germ, a quintessence of the most dreaded contagious diseases, the miraculous feature of it all being that men should emerge alive from their immersion in such filth.

“Gently, gently,” repeated M. Sabathier to Father Pierre and the Marquis de Salmon-Roquebert, who had taken hold of him under the hips in order to carry him to the bath. And he gazed with childlike terror at that thick, livid water on which floated so many greasy, nauseating patches of scum. However, his dread of the cold was so great that he preferred the polluted baths of the afternoon, since all the bodies that were dipped in the water during the early part of the day ended by slightly warming it.

“We will let you slide down the steps,” exclaimed the marquis in an undertone; and then he instructed Pierre to hold the patient with all his strength under the armpits.

M. Sabathier was then slowly lowered. You could now only see his back, his poor painful back that swayed and swelled, mottled by the rippling of a shiver. And when they dipped him, his head fell back in a spasm, a sound like the cracking of bones was heard, and breathing hard, he almost stifled.

M. de Salmon-Roquebert repeated the cry, which the regulations required the hospitaliers to raise at each fresh immersion. Pierre, therefore, had to imitate his companion, and his pitiful feelings at the sight of so much suffering were so intense that he regained some little of his faith. It was long indeed since he had prayed like this, devoutly wishing there might be a God in heaven, whose omnipotence could assuage the wretchedness of humanity. At the end of three or four minutes, however, when with great difficulty they drew M. Sabathier, livid and shivering, out of the bath, the young priest fell into deeper, more despairing sorrow than ever at beholding how downcast, how overwhelmed the sufferer was at having experienced no relief. Again had he made a futile attempt; for the seventh time the Blessed Virgin had not deigned to listen to his prayers. He closed his eyes, from between the lids of which big tears began to roll while they were dressing him again.

Father Fourcade and Father Massias, sud­denly arriving, gave orders to suspend the immersions. A great miracle was about to be attempted—the restoration of a dead man to life. Two bearers came in with a covered stretcher, which they deposited in the middle of the dressing room. 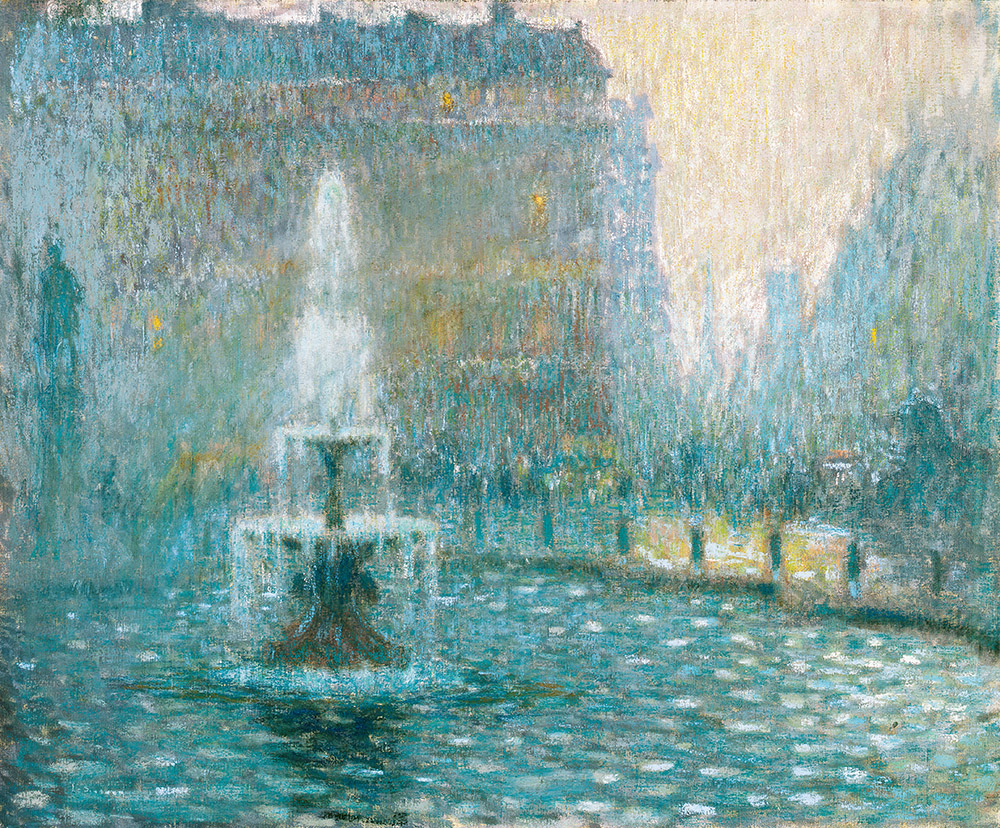 The curtains of the stretcher were raised, and the man’s corpse appeared, already stiff, and seemingly reduced and shrunken, with large eyes that had obstinately remained wide open. Pierre noticed that the Marquis de Salmon-Roquebert, who showed such devotion to the living, such freedom from all repugnance whenever they were in question, had now drawn aside and fallen on his knees, as though to avoid the necessity of touching that lifeless corpse. And the young priest thereupon followed his example and knelt near him in order to keep countenance.

Making an effort, the two hospitaliers now raised the man by means of the straps, carried him to the bath, and slowly lowered him into the water, at each moment fearing he would slip away from their hold. Pierre, although overcome by horror, could not do otherwise than look at them, and thus he distinctly beheld the immersion of this corpse in its sorry garments, which on being wetted clung to the bones, outlining the skeleton-like figure of the deceased, who floated like a man who has been drowned. But the repulsive part of it all was, that in spite of the rigor mortis, the head fell backward into the water and was submerged by it. In vain did the hospitaliers try to raise it by pulling the shoulder straps; as they made the attempt, the man almost sank to the bottom of the bath. And how could he have recovered his breath when his mouth was full of water, his staring eyes seemingly dying afresh beneath that watery veil?

Then, during the three long minutes allowed for the immersion, the two fathers of the Assumption and the chaplain, in a paroxysm of desire and faith, strove to compel the intervention of heaven, praying in such loud voices that they seemed to choke.

“Do thou but look on him, O Lord, and he will live again! Lord! May he rise at thy voice to convert the earth! Lord! Thou hast but one word to say and all thy people will acclaim thee!”

At last, as though some vessel had broken in his throat, Father Massias fell groaning and choking on his elbows, with only enough strength left him to kiss the flagstones. And from without came the clamor of the crowd, the ever-repeated cry, which the Capuchin was still leading: “Lord, heal our sick! Lord, heal our sick!” This appeal seemed so singular at that moment that Pierre’s sufferings were increased. He could feel, too, that the marquis was shuddering beside him. And so the relief was general when the overseer, thoroughly annoyed with the whole business, curtly shouted to the hospitaliers, “Take him out! Take him out at once!”

The body was removed from the bath and laid on the stretcher, looking like the corpse of a drowned man with its sorry garments clinging to its limbs. The water was trickling from the hair, and rivulets began falling on either side, spreading out in pools on the floor. And naturally, dead as the man had been, dead he remained.

From Lourdes. The holy waters at Lourdes were discovered by fourteen-year-old Bernadette Soubirous, who reported seeing an apparition of the Virgin Mary there in 1858. Zola, whose naturalist work was inspired by developments in the social and natural sciences, visited in 1891 and 1892 and was skeptical of the waters’ claimed healing power; when Lourdes first appeared in English translation in 1906, one critic described it as “an open wound.” According to the Catholic Church, sixty-nine cures have been verified as miracles by the Lourdes Medical Bureau since Bernadette’s visions.