Our mother, weeping as she went, called me away with the children Hannah and Dinah, and we took the road that led to Hamble Town, which we reached about four o’clock in the afternoon.

We followed my mother to the marketplace, where she placed us in a row against a large house, with our backs to the wall and our arms folded across our breasts. I, as the eldest, stood first, Hannah next to me, then Dinah; and our mother stood beside, crying over us. My heart throbbed with grief and terror so violently that I pressed my hands quite tightly across my breast, but I could not keep it still, and it continued to leap as though it would burst out of my body. But who cared for that? Did one of the many bystanders, who were looking at us so carelessly, think of the pain that wrung the hearts of the Negro woman and her young ones? No, no! They were not all bad, I daresay, but slavery hardens white people’s hearts toward the blacks; and many of them were not slow to make their remarks upon us aloud, without regard to our grief—though their light words fell like cayenne on the fresh wounds of our hearts. Oh, those white people have small hearts who can only feel for themselves.

At length the vendue master, who was to offer us for sale like sheep or cattle, arrived and asked my mother which was the eldest. She said nothing, but pointed to me. He took me by the hand and led me out into the middle of the street and, turning me slowly around, exposed me to the view of those who attended the vendue. I was soon surrounded by strange men, who examined and handled me in the same manner that a butcher would a calf or a lamb he was about to purchase, and who talked about my shape and size in like words—as if I could no more understand their meaning than the dumb beasts. I was then put up to sale. The bidding commenced at a few pounds and gradually rose to fifty-seven, when I was knocked down to the highest bidder; and the people who stood by said that I had fetched a great sum for so young a slave. 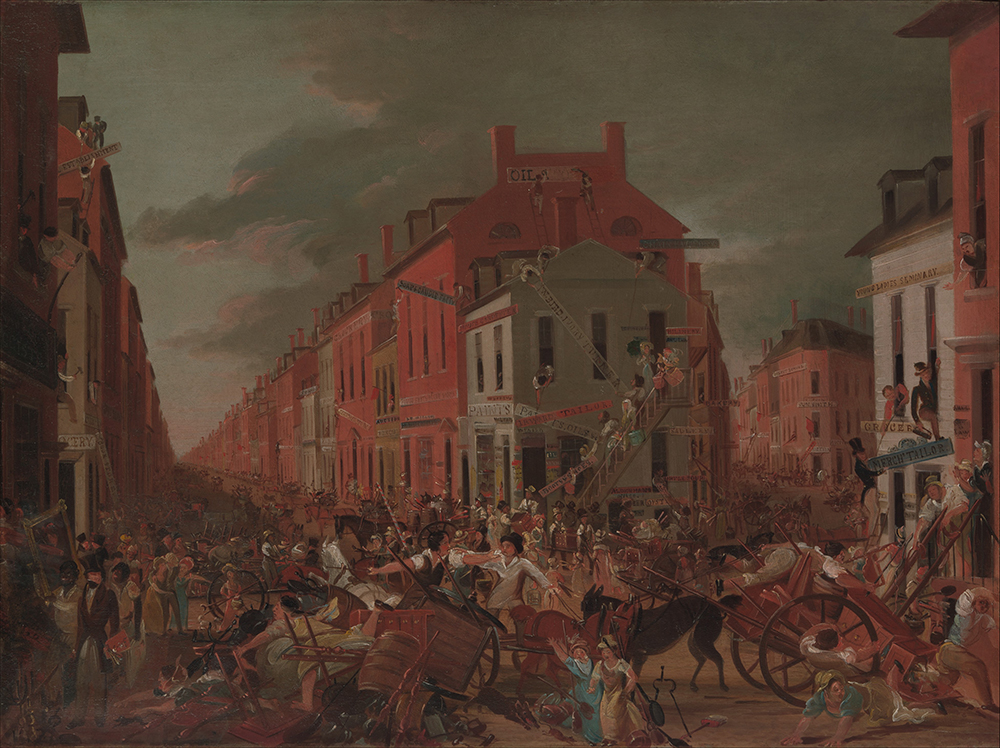 I then saw my sisters led forth and sold to different owners, so that we had not the sad satisfaction of being partners in bondage. When the sale was over, my mother hugged and kissed us and mourned over us, begging of us to keep up a good heart, and do our duty to our new masters. It was a sad parting; one went one way, one another, and our poor mammy went home with nothing.

My new master was a Captain I——, who lived at Spanish Point. After parting with my mother and sisters, I followed him to his store, and he gave me into the charge of his son, a lad about my own age, Master Benjy, who took me to my new home. I did not know where I was going, or what my new master would do with me. My heart was quite broken with grief, and my thoughts went back continually to those from whom I had been so suddenly parted. “Oh, my mother! My mother!” I kept saying to myself, “Oh, my mammy and my sisters and my brothers, shall I never see you again!”

Oh, the trials! The trials! They make the salt water come into my eyes when I think of the days in which I was afflicted—the times that are gone; when I mourned and grieved with a young heart for those whom I loved.

It was night when I reached my new home. The house was large and built at the bottom of a very high hill; but I could not see much of it that night. I saw too much of it afterward. The stones and the timber were the best things in it; they were not so hard as the hearts of the owners.

Before I entered the house, two slave women, hired from another owner, who were at work in the yard, spoke to me and asked whom I belonged to? I replied, “I am come to live here.” “Poor child, poor child!” they both said. “You must keep a good heart if you are to live here.” When I went in, I stood up, crying in a corner. Mrs. I—— came and took off my hat, a little black silk hat Miss Pruden made for me and said in a rough voice, “You are not come here to stand up in corners and cry, you are come here to work.” She then put a child into my arms, and tired as I was, I was forced instantly to take up my old occupation of a nurse. I could not bear to look at my mistress, her countenance was so stern. She was a stout, tall woman with a very dark complexion, and her brows were always drawn together into a frown. I thought of the words of the two slave women when I saw Mrs. I——, and heard the harsh sound of her voice.

Some people make stuff; other people have to buy it. And when we gave up making stuff, starting in the 1980s, we were left with the unique role of buying.

The person I took the most notice of that night was a French black called Hetty, whom my master took in privateering from another vessel and made his slave. She was the most active woman I ever saw, and she was tasked to her utmost. A few minutes after my arrival, she came in from milking the cows and put the sweet potatoes on for supper. She then fetched home the sheep and penned them in the fold; drove home the cattle, and staked them about the pond side; fed and rubbed down my master’s horse, and gave the hog and the fed cow their suppers; prepared the beds, and undressed the children, and laid them to sleep. I liked to look at her and watch all her doings, for hers was the only friendly face I had as yet seen, and I felt glad that she was there. She gave me my supper of potatoes and milk, and a blanket to sleep upon, which she spread for me in the passage before the door of Mrs. I——’s chamber.

I got a sad fright that night. I was just going to sleep when I heard a noise in my mistress’ room; and she presently called out to inquire if some work was finished that she had ordered Hetty to do.

“No, ma’am, not yet,” was Hetty’s answer from below. On hearing this, my master started up from his bed, and just as he was, in his shirt, ran downstairs with a long cowhide in his hand. I heard immediately after the cracking of the thong, and the house rang to the shrieks of poor Hetty, who kept crying out, “Oh, Massa! Massa! Dead. Massa! Have mercy upon me—don’t kill me outright.” This was a sad beginning for me. I sat up upon my blanket, trembling with terror, like a frightened hound, and thinking that my turn would come next. At length the house became still, and I forgot for a little while all my sorrows by falling fast asleep.

From her autobiography. After about five years in Captain I——’s household, Mary was sold and made to work in salt ponds on Grand Turk and later again sold to a family in Antigua, where she developed rheumatism. In 1828 that family took her with them to England, where she was freed. Prince attempted to return to Antigua to rejoin her husband but was unable to ensure her freedom there; she remained in England to work at the Anti-Slavery Society and became the first woman to present an antislavery petition to Parliament.