There is no question that the tendency of the average man (in all walks of life) is toward working at a slow, easy gait, and that it is only after a good deal of thought and observation on his part or as a result of example, conscience, or external pressure that he takes a more rapid pace.

There are, of course, men of unusual energy, vitality, and ambition who naturally choose the fastest gait, set up their own standards, and who will work hard, even though it may be against their best interests. But these few uncommon men only serve by affording a contrast to emphasize the tendency of the average.

This common tendency to “take it easy” is greatly increased by bringing a number of men together on similar work and at a uniform standard rate of pay by the day.

Under this plan the better men gradually but surely slow down their gait to that of the poorest and least efficient. When a naturally energetic man works for a few days beside a lazy one, the logic of the situation is unanswerable: “Why should I work hard when that lazy fellow gets the same pay that I do and does only half as much work?”

A careful time study of men working under these conditions will disclose facts which are ludicrous as well as pitiable.

To illustrate: the writer has timed a naturally energetic workman who, while going and coming from work, would walk at a speed of from three to four miles per hour, and not infrequently trot home after a day’s work. On arriving at his work he would immediately slow down to a speed of about one mile an hour. When, for example, wheeling a loaded wheelbarrow he would go at a good fast pace even uphill in order to be as short a time as possible under load, and immediately on the return walk slow down to a mile an hour, improving every opportunity for delay short of actually sitting down. In order to be sure not to do more than his lazy neighbor he would actually tire himself in his effort to go slow.

These men were working under a foreman of good reputation and one highly thought of by his employer who, when his attention was called to this state of things, answered, “Well, I can keep them from sitting down, but the devil can’t make them get a move on while they are at work.”

The natural laziness of men is serious, but by far the greatest evil from which both workmen and employers are suffering is the systematic soldiering which is almost universal under all of the ordinary schemes of management and which results from a careful study on the part of the workmen of what they think will promote their best interests.

The writer was much interested recently to hear one small but experienced golf caddie boy of twelve explaining to a green caddie who had shown special energy and interest the necessity of going slow and lagging behind his man when he came up to the ball, showing him that since they were paid by the hour, the faster they went, the less money they got, and finally telling him that if he went too fast the other boys would give him a licking.

This represents a type of systematic soldiering which is not, however, very serious, since it is done with the knowledge of the employer, who can quite easily break it up if he wishes.

The greater part of the systematic soldiering, however, is done by the men with the deliberate object of keeping their employers ignorant of how fast work can be done.

So universal is soldiering for this purpose that hardly a competent workman can be found in a large establishment, whether he works by the day or on piecework, contract work or under any of the ordinary systems of compensating labor, who does not devote a considerable part of his time to studying just how slowly he can work and still convince his employer that he is going at a good pace.

The causes for this are, briefly, that practically all employers determine upon a maximum sum which they feel it is right for each of their classes of employees to earn per day, whether their men work by the day or piece. 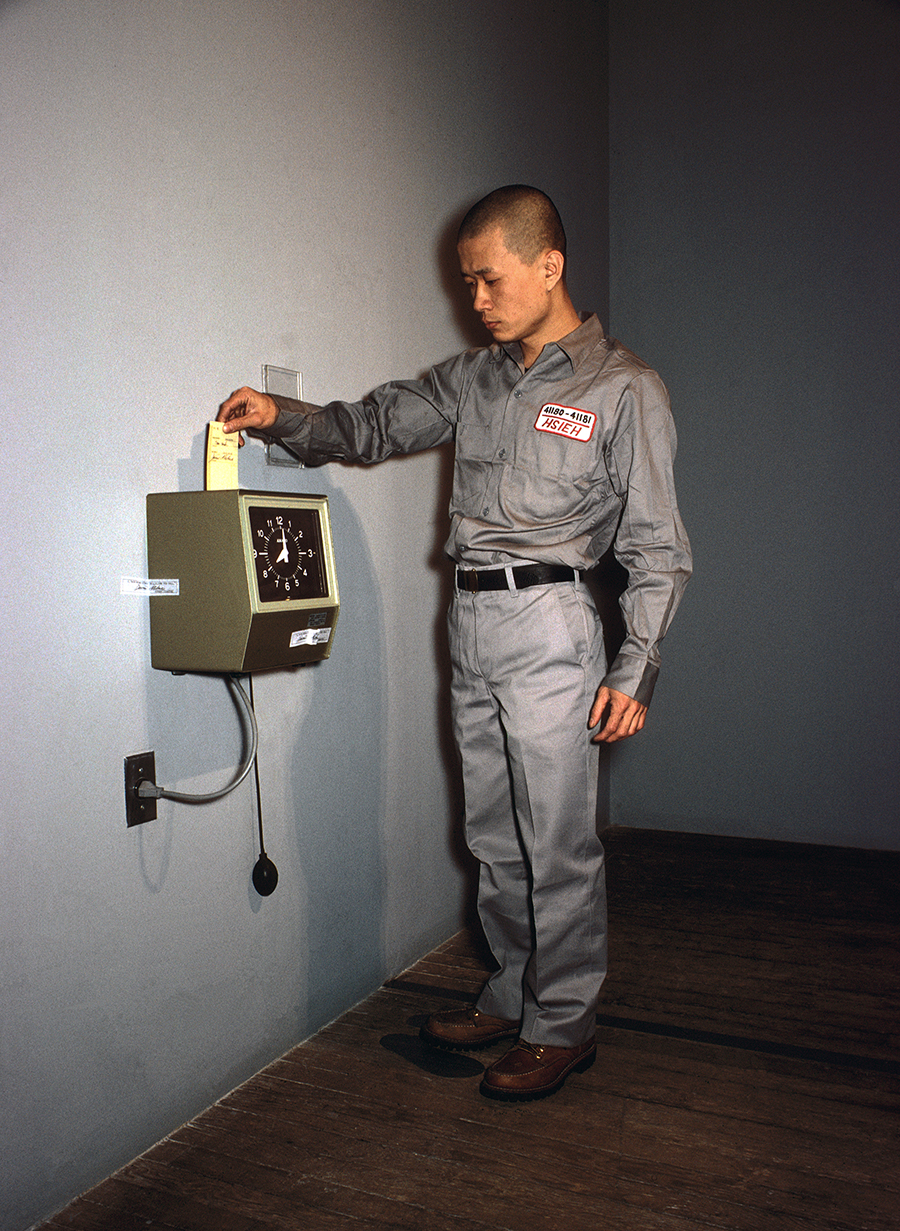 “Punching the Time Clock,” from One Year Performance 1980–1981, by Tehching Hsieh. Photograph by Michael Shen. © Tehching Hsieh, 1981, courtesy of the artist and Sean Kelly, New York.

Each workman soon finds out about what this figure is for his particular case, and he also realizes that when his employer is convinced that a man is capable of doing more work than he has done, he will find sooner or later some way of compelling him to do it with little or no increase of pay.

Employers derive their knowledge of how much of a given class of work can be done in a day from either their own experience, which has frequently grown hazy with age, from casual and unsystematic observation of their men, or at best from records which are kept, showing the quickest time in which each job has been done. In many cases the employer will feel almost certain that a given job can be done faster than it has been, but he rarely cares to take the drastic measures necessary to force men to do it in the quickest time, unless he has an actual record, proving conclusively how fast the work can be done.

It evidently becomes for each man’s interest, then, to see that no job is done faster than it has been in the past. The younger and less experienced men are taught this by their elders, and all possible persuasion and social pressure is brought to bear upon the greedy and selfish men to keep them from making new records which result in temporarily increasing their wages, while all those who come after them are made to work harder for the same old pay.

Under the best daywork of the ordinary type, when accurate records are kept of the amount of work done by each man and of his efficiency, and when each man’s wages are raised as he improves, and those who fail to rise to a certain standard are discharged and a fresh supply of carefully selected men are given work in their places, both the natural loafing and systematic soldiering can be largely broken up.

​From Shop Management. In the 1870s and 1880s Taylor rose from machinist to chief engineer at the Midvale Steel Company, where he first developed what he termed “time study,” using stopwatches to determine the most efficient uses of men and machines. He became one of the first management consultants specializing in industrial operations, introducing to the Bethlehem Steel Company production management and cost accounting. In 1911 Taylor published the bestseller The Principles of Scientific Management.