Much wine had passed with grave discourse
Of who fucks who and who does worse,
Such as you usually do hear
From them that diet at the Bear,
When I, who still take care to see
Drunkenness relieved by lechery,
Went out into St. James’ Park
To cool my head and fire my heart.
But though St. James has the honor on’t,
’Tis consecrate to prick and cunt.
There by a most incestuous birth
Strange woods spring from the teeming earth,
For they relate how heretofore,
When ancient Pict began to whore,
Deluded of his assignation
(Jilting it seems was then in fashion),
Poor pensive lover in this place
Would frig upon his mother’s face,
Whence rows of mandrakes tall did rise
Whose lewd tops fucked the very skies.
Each imitative branch does twine
In some loved fold of Aretine.
And nightly now beneath their shade
Are buggeries, rapes, and incests made.
Unto this all-sin-sheltering grove
Whores of the bulk and the alcove,
Great ladies, chambermaids, and drudges,
The ragpicker and heiress trudges.
Car men, divines, great lords, and tailors,
’Prentices, pimps, poets, and jailers,
Footmen, fine fops do here arrive,
And here promiscuously they swive.
Along these hallowed walks it was
That I beheld Corinna pass.
Whoever had been by to see
The proud disdain she cast on me
Through charming eyes, he would have swore
She dropped from heav’n that very hour,
Forsaking the divine abode
In scorn of some despairing God.
But mark what creatures women are,
So infinitely vile, when fair.
Three knights of th’ elbow and the slur
With wriggling tails made up to her.
The first was of your Whitehall blades,
Near kin to th’ Mother of the Maids,
Graced by whose favor he was able
To bring a friend to th’ waiters’ table,
Where he had heard Sir Edward Sutton
Say how the king loved Banstead mutton;
Since when he’d ne’er be brought to eat
By’s goodwill any other meat.
In this, as well as all the rest,
He ventures to do like the best,
But wanting common sense, th’ ingredient
In choosing well not least expedient,
Converts abortive imitation
To universal affectation.
So he not only eats and talks,
But feels and smells, sits down and walks,
Nay, looks and lives and loves by rote
In an old tawdry birthday coat.
The second was a Gray’s Inn wit,
A great inhabiter of the pit,
Where critic-like he sits and squints,
Steals pocket handkerchiefs and hints
From’s neighbor and the comedy,
To court and pay his landlady.
The third, a lady’s eldest son
Within few years of twenty-one,
Who hopes from his propitious fate
Against he comes to his estate,
By these two worthies to be made
A most accomplished, tearing blade.
One in a strain ’twixt tune and nonsense,
Cries, “Madam, I have loved you long since,
Permit me your fair hand to kiss”;
When at her mouth her cunt says, “Yes.”
In short, without much more ado,
Joyful and pleased away she flew
And with these three confounded asses
From park to hackney coach she passes;
So a proud bitch does lead about
Of humble curs the amorous rout,
Who most obsequiously do hunt
The savory scent of salt-swol’n cunt.
Some power more patient now relate
The sense of this surprising fate,
Gads! that a thing admired by me
Should fall to so much infamy. 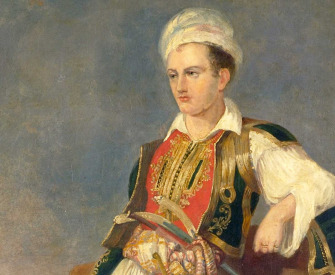