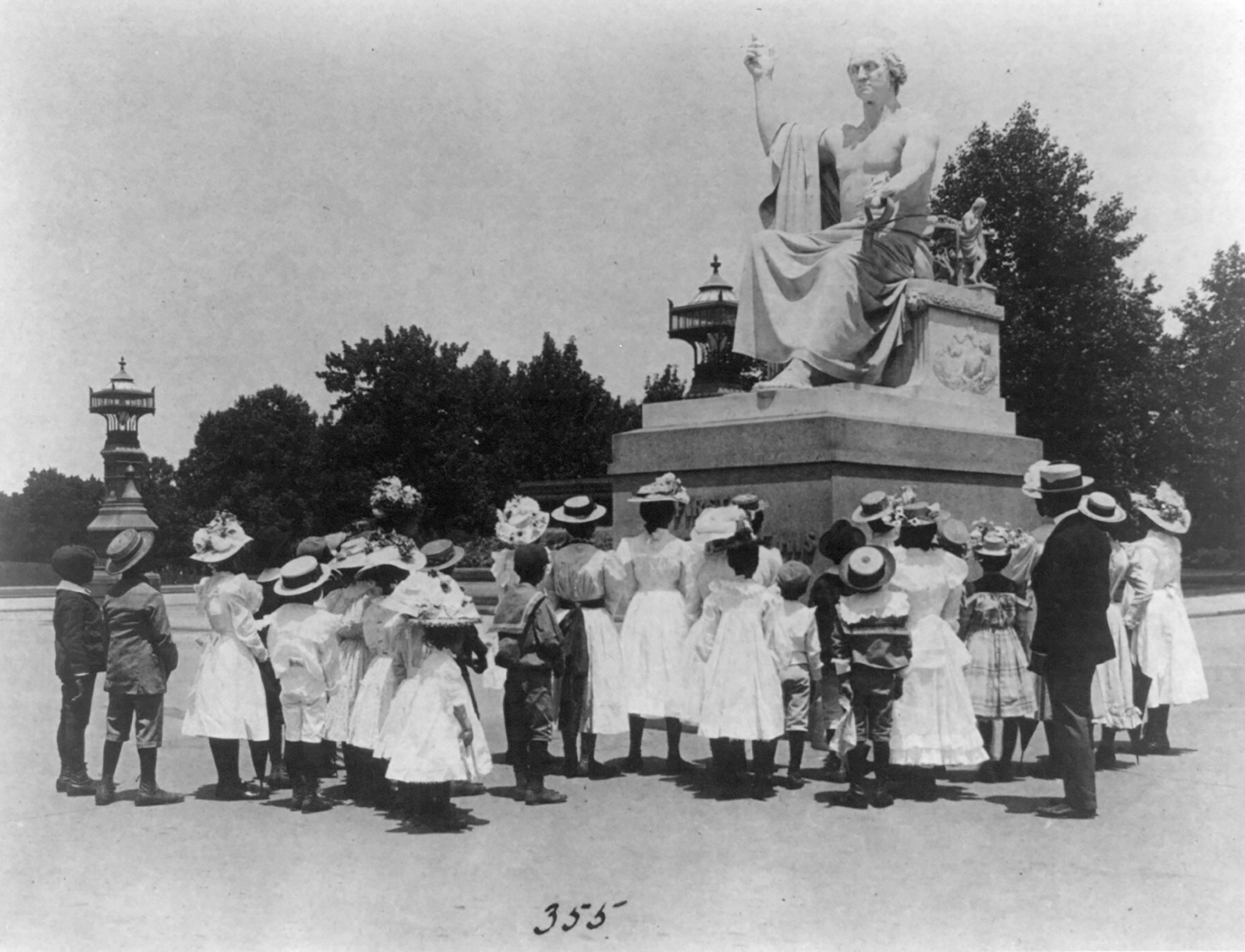 On July 9, 1776, five days after the signing of the Declaration of Independence, a crowd of revolutionaries in New York City pulled down the only equestrian monument in North America. It was a statue of King George III, bestowed on the ungrateful colony by its God-given ruler. The anger of today’s protesters looks mild compared to the fury of our founding patriots: they decapitated their former king’s statue, cut off its nose, shot a musket ball through its head, and melted down much of the remaining body to make bullets for the rebel army. Some of the lead from the statue would end up lodged inside the bodies of British soldiers who were defending their monarch’s divine claim to authority.

Not long after, a new George became the head of this new nation, officially dedicated to the principle that a people could govern itself. The death of citizen George Washington in 1799 began what would become an ongoing debate over the role of monuments in a democratic society. 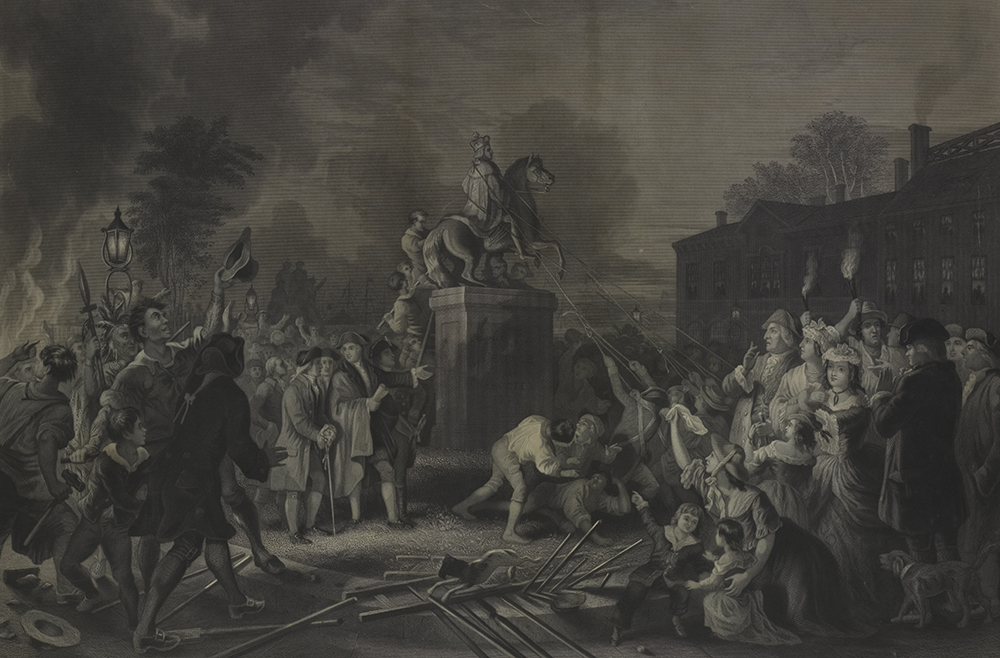 As people argued passionately over how to commemorate Washington, powerful voices proclaimed that the monumental legacy of Europe, like George III’s toppled equestrian, was obsolete, utterly out of step with the progressive ideals of the new republic. “Monuments are good for nothing,” North Carolina congressman Nathaniel Macon declared in 1800; the money would be better spent teaching the poor how to read, so they could learn Washington’s story for themselves.

In a nation where political power was given and taken away by the people, rather than bestowed by God, permanent monuments no longer seemed to make sense. Monuments in stone or bronze made rulership appear inevitable and unchanging, while democracies required participation and adaptability. The experiment of 1776, at its core, was anti-monumental.

John Nicholas of Virginia came up with the most arresting solution. Instead of erecting a statue over Washington’s tomb, he proposed “a plain tablet, on which every man could write what his heart dictated. This, and this only, was the basis of his fame.” It should have no imagery or inscriptions whatsoever, its content produced solely by the people who engaged with it. “It must live in the national feeling.”

Nicholas’ idea was an inspired expression of democratic process, but its rhetoric came out of the politics of the moment, in particular a partisan battle between Federalists and Jeffersonians over the proper scope of federal power. Nicholas carried Jefferson’s baggage: he was a celebrated free-speech advocate and also a large-scale enslaver, making him perfectly symptomatic of the new republic’s fundamental hypocrisy.

Once the radical rhetoric of that moment subsided, the U.S. relapsed into the good-for-nothing monumental tradition of Europe. Statues of Washington started to proliferate. Even the iconoclast Nathaniel Macon helped procure a Washington, in Roman garb no less, for his home state’s capital. This commemorative wave reached a peak of pretension in Horatio Greenough’s colossal, bare-chested marble statue—modeled after the ancient god Zeus—commissioned by Congress for the Capitol building in 1841. Yet even this absurdly outmoded statue used Washington to preside over a modern project: the nation’s relentless territorial expansion under white supremacy. With smaller figures of Columbus, a downcast Indian, and a cowering “South American” on Washington’s throne, the statue celebrated the conquest and exclusion of supposedly “inferior” peoples.

Within twenty-five years, that national project would lead to the massive human losses of the Civil War, the assassination of Abraham Lincoln, and the overthrow of a 250-year-old system of slavery. The U.S. found itself in another moment of profound self-examination as it struggled to answer the call to commemorate and reckon with unprecedented mass trauma and social change. The critic William Dean Howells summed up the challenge as the “Question of Monuments” in an 1866 essay in The Atlantic. How would the commemoration of the recent past be made adequate to the demands of the present, to what he called “the change which has come upon races, ethics, and ideas in this new world”?

While some Americans echoed the old Jeffersonian rhetoric and called for utilitarian memorials, like schools or hospitals named after Lincoln, Howells insisted that any memorial should include art with a capital A. But the only example he could conjure up was a little statuette called The Freedman, a seated figure of a Black fugitive pausing on his escape to freedom, which he thought would better celebrate the deeds of the soldiers than “a standing army in bronze and marble.” 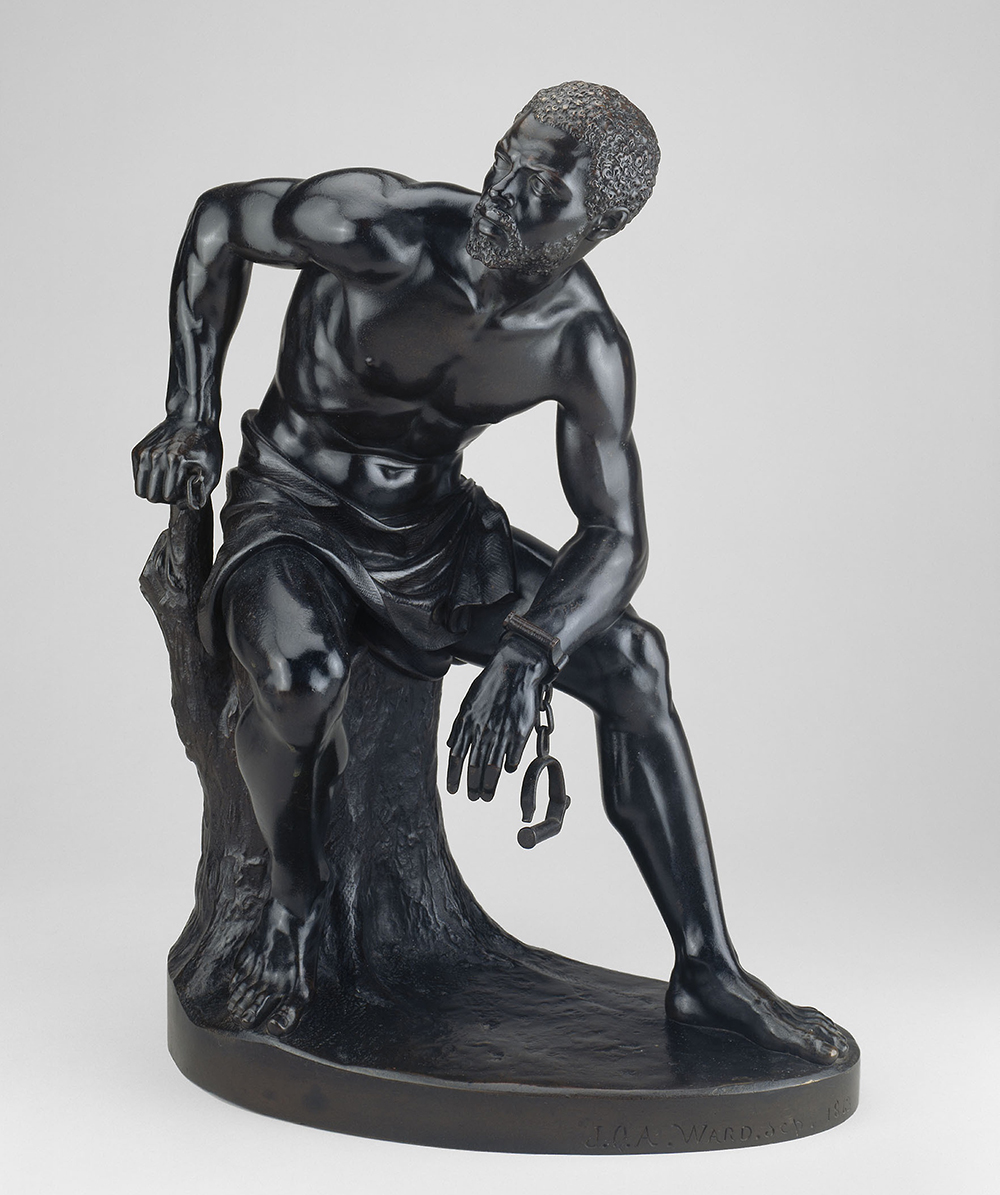 Once again, however, public monuments failed to rise to the challenge. Nowhere is that failure more conspicuous than in the so-called Emancipation Memorial, originally erected as the Freedmen’s Memorial to Abraham Lincoln, in Washington, DC, at the end of Reconstruction. Although the funds for the monument did come from freedmen, mostly Union soldiers in “colored troops,” a committee of white philanthropists in St. Louis controlled the money and decided on the artist and design without ever consulting their funders.

Like Greenough’s Washington, the monument they produced looked backward to an obsolete tradition—in this case the prewar abolitionist image of a slave stripped naked, on his knee, pleading for his humanity to be recognized. While The Freedman had updated and empowered this ubiquitous figure, the Emancipation Memorial went in the opposition direction, adding a standing figure of Lincoln holding the Emancipation Proclamation, and thereby reinforcing the old formula of “white savior” and “helpless slave.” The monument shifted in reverse to a bygone era, before African Americans had fought for their own liberation, secured citizenship, and voted themselves into office.

At the dedication ceremony, the white director of the monument committee made an extraordinary admission. He acknowledged that the first design for their monument, which had to be shelved because of its cost, should someday be erected: it featured a cycle of four standing black figures ending in a uniformed soldier. Not long afterward, Frederick Douglass also made a similar appeal for another “monument representing the Negro, not couchant on his knees like a four-footed animal, but erect on his feet like a man.”

The Emancipation Memorial was a colossal failure to emancipate American monumental imagination from the mental shackles of a worldview founded on divine white mastery. Tragically, it registered a political failure, too: the nation’s retreat from Reconstruction and its ideal of an interracial society premised on equality. The monument’s dual failure anticipated the rise of Confederate statues like Robert E. Lee’s on Richmond’s Monument Avenue, which asserted the depicted figures’ mastery over contemporary Southern society and over the Black communities excluded from it. 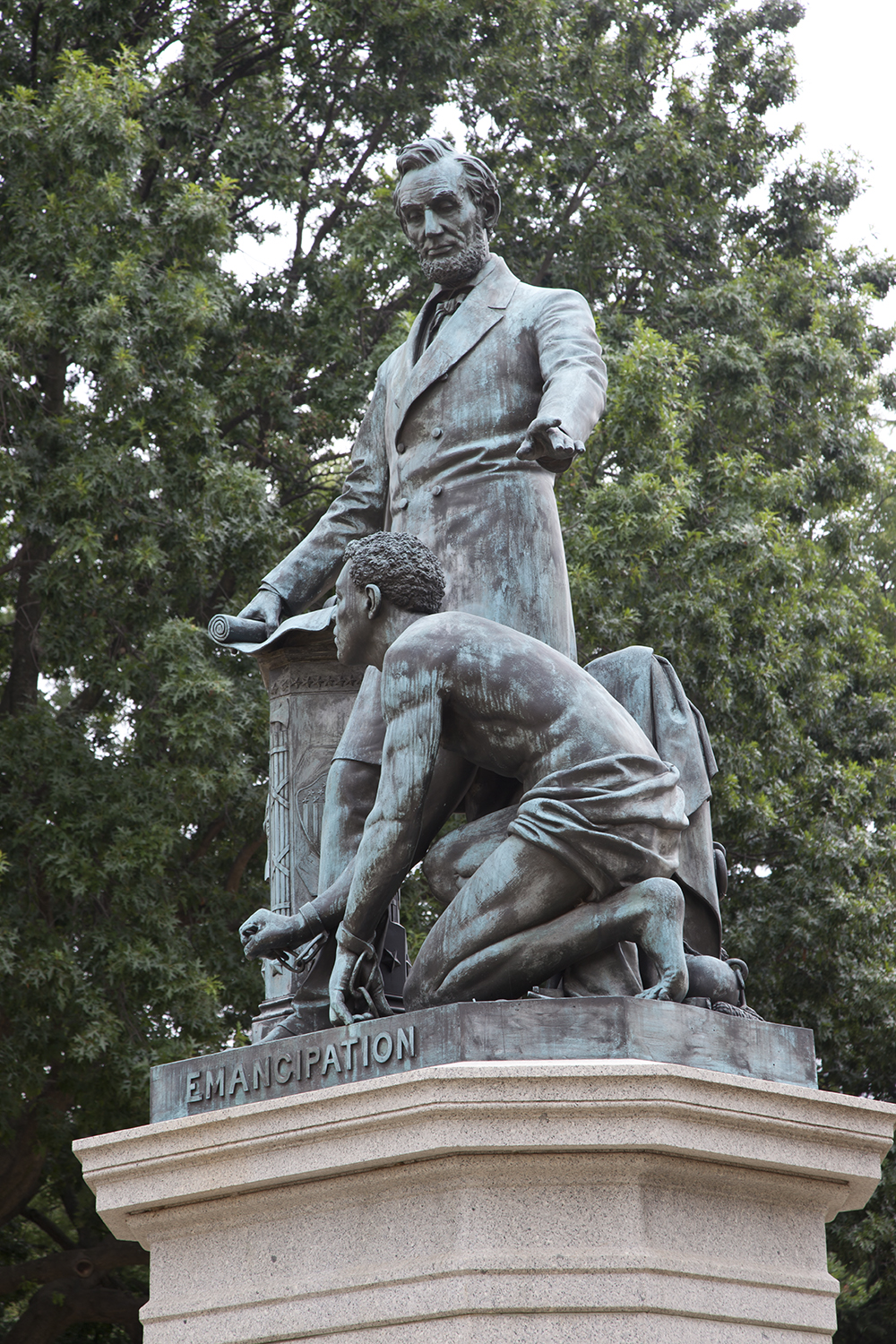 The Black freedmen who had joined the Union army, brought down slavery, and financed the Emancipation Memorial faded into invisibility in this commemorative landscape. The “standing army in bronze and marble” Howells had feared in 1866 came to pass, as statues of generic white soldiers spread through big cities and small towns alike.

Despite our long history of questioning the authority of the statue landscape, no movement has been able to dislodge it. The “living memorial” campaign after World War I did not stem the flood of doughboy monuments. Maya Lin’s abstract “anti-monument” to Vietnam veterans was a worthy successor to Nicholas’ blank tablet, but ended up spawning a backlash of realistic statues at the end of the century. Even the trauma of 9/11 and the rise of victim memorials have not displaced figurative sculpture from the collective memorial imagination. At the Equal Justice Initiative’s National Memorial for Peace and Justice in Montgomery, the huge structure of suspended steel columns inscribed with names of lynching victims has a realistic counterpart in a group of chained Black figures at the entrance to the memorial site. Even as monument design has become more spatial and experiential, the demand for traditional sculptural icons has remained strong, especially for hero monuments like the Martin Luther King Jr. memorial on the Mall.

Now, for the first time since the Revolutionary era, we are witnessing a full-scale reckoning with the long inherited tradition of public statues. If the protests seem scattershot, aimed only at particular monuments to bad men and ideas, the national (and worldwide) scope of the movement is mounting a more fundamental challenge to the undemocratic system that elevated those conquerors, enslavers, robber barons, and Confederates in the first place. 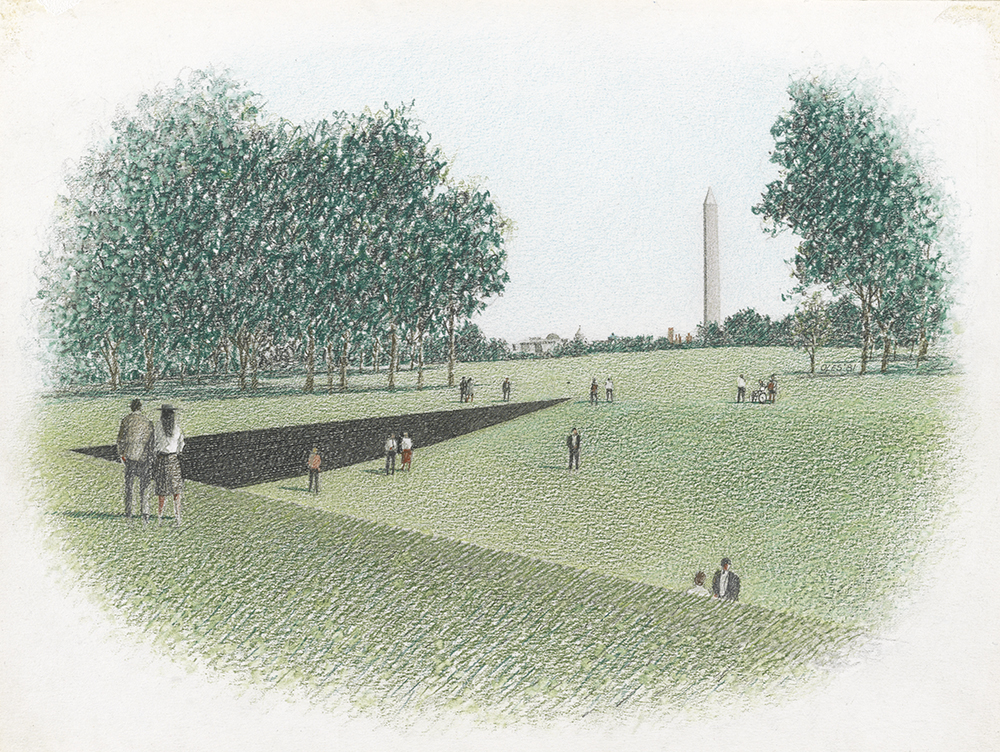 Monuments have never arisen by magic out of some sort of democratic consensus. They have always been built by small groups with access to power in order to advance their own agendas in the present. Most monuments are more about their makers than about the historical subjects those makers enlist into their cause.

Not surprisingly, much of today’s protest against statues comes from the very people who were excluded from the process of monument making in the past. Their attempts to redress that exclusion peacefully and make their views known often go ignored. In the absence of a legitimate process of public engagement, protest is often the only way to amplify their voices in the monumental landscape. Even so relatively few statues have been brought down by crowds, and far more by local authorities.

The response from our current president is yet another top-down directive with no process of democratic engagement whatsoever. His executive order for a “National Garden of American Heroes” mandates a collection of “lifelike or realistic” statues, “not abstract or modernist representations.” Even with its politically correct sprinkling of women and Blacks, there is not a single indigenous person on the proposed list—not even Pocahontas—a fitting erasure in a pseudo-initiative released on the day of a fireworks show over the sacred tribal lands of Mount Rushmore. This frankly ridiculous directive has been creatively “revised” by the activist research studio Monument Lab.

No monument garden will forestall the reckoning we must have with our inherited statues. And any honest reckoning will inevitably result in removals.

Yet binary thinking—to statue or not to statue—will not solve our monument problem or the structural oppressions that monuments typically enforce. If there is one insight to take from Nicholas, it is that the work of memory in a democracy requires ongoing activism. Monuments exist because the past “lives in the national feeling.”

The circle surrounding Robert E. Lee’s equestrian statue in Richmond has become a far more democratic space of dialogue and activism than it ever was in the days of Lost Cause worship. The Emancipation Memorial is now the site of a very intense debate about representation and Black history. Both monuments could be removed to curated spaces, while their original sites could be reimagined in a community process that builds upon the activisms of the present. Monument Lab has been a leader in reimagining community engagement with monumental history, and the Equal Justice Initiative is using its anti-lynching monument to promote an active program of “restorative truth-telling” in the communities where lynchings took place.

The “question of monuments” allows for many different answers. Monuments alone can’t solve any problems, but their spaces can serve as platforms for a democratic people to reengage with its history and, ultimately, to transform it.

Kirk Savage is the William S. Dietrich II Professor of History of Art and Architecture at the University of Pittsburgh. He is the author of Standing Soldiers, Kneeling Slaves: Race, War, and Monument in Nineteenth-Century America and Monument Wars: Washington, D.C., the National Mall, and the Transformation of the Memorial Landscape and the editor of The Civil War in Art and Memory.