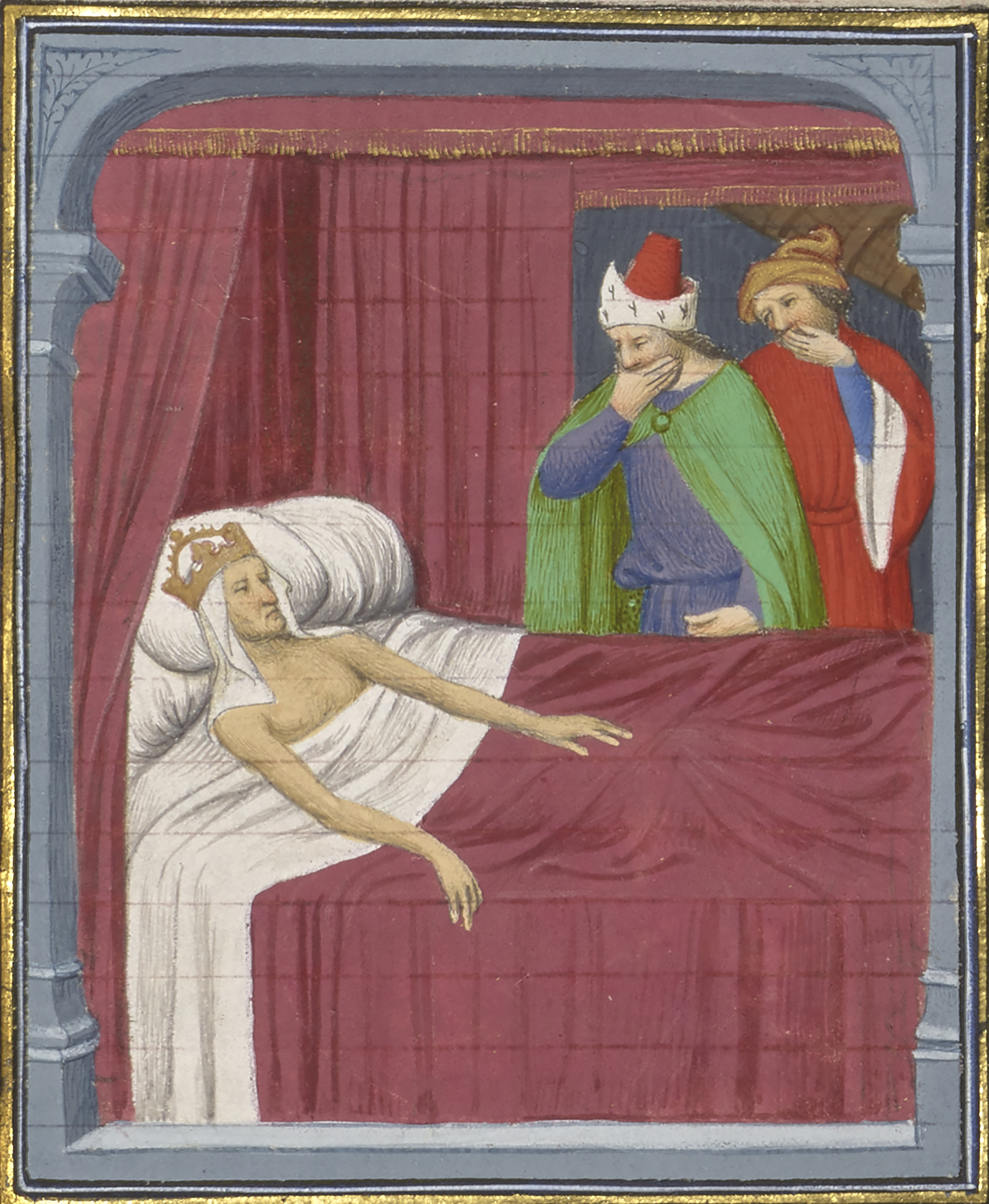 The Putrefaction of the Flesh of the Dying Emperor Galerius, by Boucicaut Master or workshop, c. 1413. The J. Paul Getty Museum, Los Angeles. Digital image courtesy of the Getty’s Open Content Program.

• “In the tenth century the Welsh ruler Hywel Dda allowed wives a marital separation if their husbands had stinking breath. In later centuries, books on courtesy warned readers against inflicting their personal smell on their neighbors at dinner: for example, by blowing on their soup to cool it.” (London Review of Books)

• “Snails have shown an ancient naked figure sculpted into a chalk hillside is unlikely to be prehistoric as hoped, archaeologists have said.” (BBC News)

• “Throughout human history, three caste systems have stood out. The lingering, millenniums-long caste system of India. The tragically accelerated, chilling, and officially vanquished caste system of Nazi Germany. And the shape-shifting, unspoken, race-based caste pyramid in the United States. Each version relied on stigmatizing those deemed inferior to justify the dehumanization necessary to keep the lowest-ranked people at the bottom and to rationalize the protocols of enforcement.” (The New York Times Magazine)

• “Charles Sumner and the Fight for Equal Naturalization Rights: Senators begged Sumner to withdraw his amendment and let them adjourn after a long and tiring day. ‘It has not been my habit to yield,’ Sumner replied.” (History News Network)

• “These are merely small stories within a much larger history of wartime violence toward animals that includes gruesome testing such as the engineer experiment on dogs and dugouts, which was violence in the name of keeping war as safe as possible for humans.” (Nursing Clio)

• “A Plagued History of Kampala.” (Africa Is a Country)

• “The Nineteenth Amendment, ratified in August 1920, paved the way for American women to vote, but the educator and activist Mary McLeod Bethune knew the work had only just begun: the amendment alone would not guarantee political power to black women.” (Smithsonianmag.com)

• “Underwater Caves in Mexico Preserve One of the World’s Oldest Ocher Mines.” (Science)

• “Opium’s remarkable reversal of course across Southeast Asia—from fiscal bedrock to banned symbol of disrepute—is not often grasped but it is an important part of modern history.” (Aeon)

• The pernicious plants of literature. (The Believer)

• “The eighteenth century was arguably the heyday for ice cream, with more varieties on offer in Georgian London than could be found in most establishments today. Flavors such as chocolate, pistachio, pineapple, jasmine, artichoke, candied pumpkin, pine nut, pear, and chestnut appeared in many of London’s fashionable ice-cream parlors.” (British Museum Blog)

• On the discovery and rescue of Guatemala’s National Police archives: “Guatemala conclusively demonstrates that archival access and management are fundamentally political. State records are never just papers. They are metaphors: for accountability, for the integrity of citizens’ rights, for the depth of democratic culture.” (Boston Review)