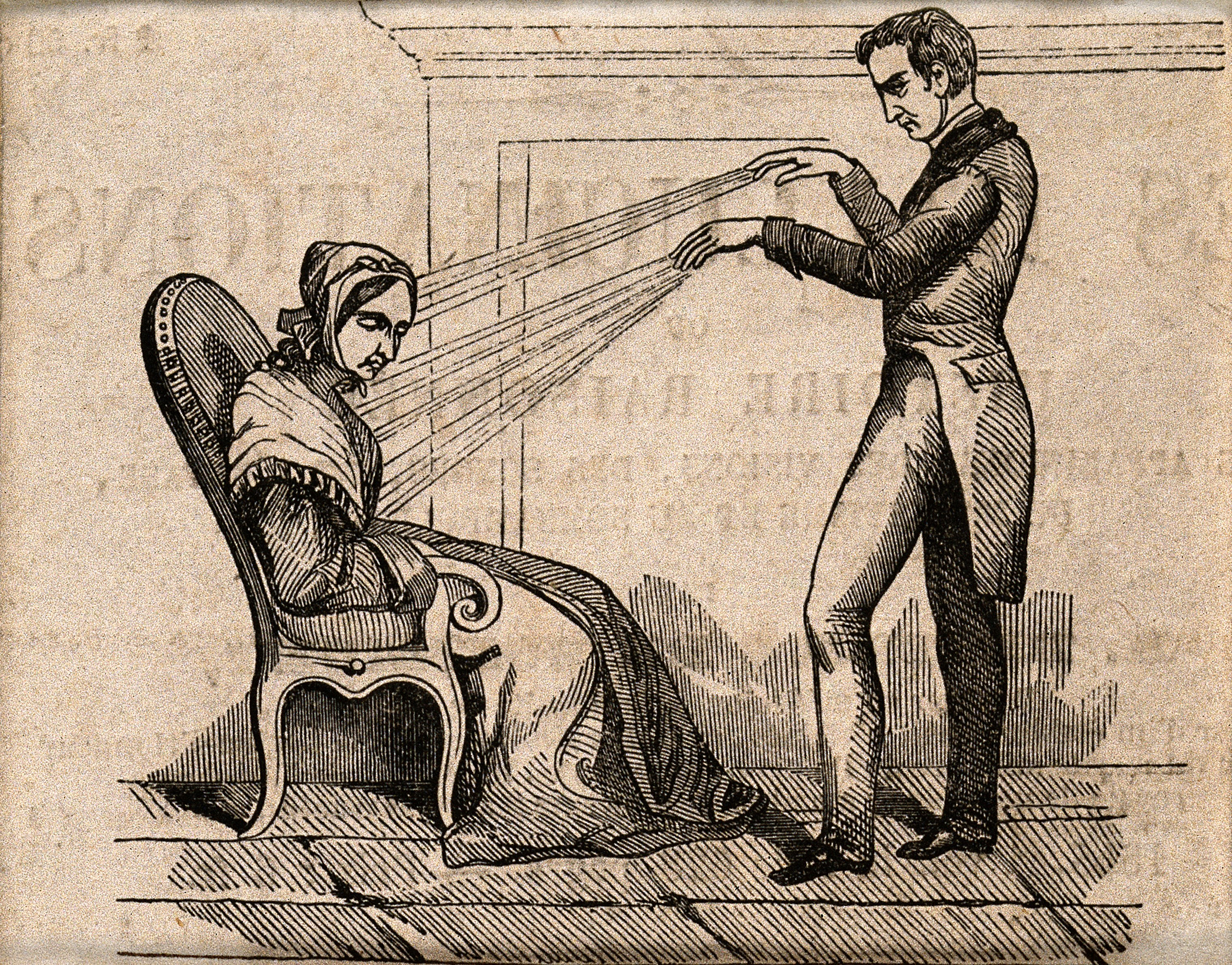 In 1784, America’s soon-to-be second, third, and fourth presidents celebrated the publication of a report debunking the practices of Franz Anton Mesmer, a Vienna-educated physician whose name gives us the word mesmerizing. John Adams, Thomas Jefferson, and James Madison all rejoiced to know that Mesmer would no longer impose on credulous Parisians with his invisible fluid of animal magnetism, a living or vital counterpart of mineral magnetism. Mesmer said that animal magnetism crackled all around us, though it was especially concentrated in human nerves. He claimed he could cure illnesses by manipulating this invisible fluid in the ailing body. His theory did not seem as implausible in 1784 as it does now; it crossed ancient humoral medicine with the best accounts then available of how electricity and magnetism worked. Mesmer had made a few false starts in Austria, including the time he promoted a theory of “animal gravitation,” before taking Paris by storm in 1778. While he called his practice animal magnetism, his opponents would coin, and his successors would eventually adopt, the term mesmerism.

Mesmer’s patients—most of them female and well-to-do—found him through word-of-mouth and in pamphlets advertising his metaphysical talents. They met in his richly appointed treatment salon, where they gathered around a bucket filled with shards of glass and water that concentrated the life-giving animal-magnetic fluid. Mesmer said all illnesses had the same cause: a blockage in the flow of animal magnetism. To restore a healthy circulation, the doctor and his assistants stalked about dramatically, waving metal wands and pressing on people’s stomachs. These proceedings brought patients under Mesmer’s thrall, permitting him, so it seemed, to rebalance their animal-magnetic fluids with artful flourishes of his magnetic wand or hand. Thus he cured their diseases. The physical tokens of the cure varied: some patients coughed and convulsed, while others became catatonic. Certain women had orgasms. 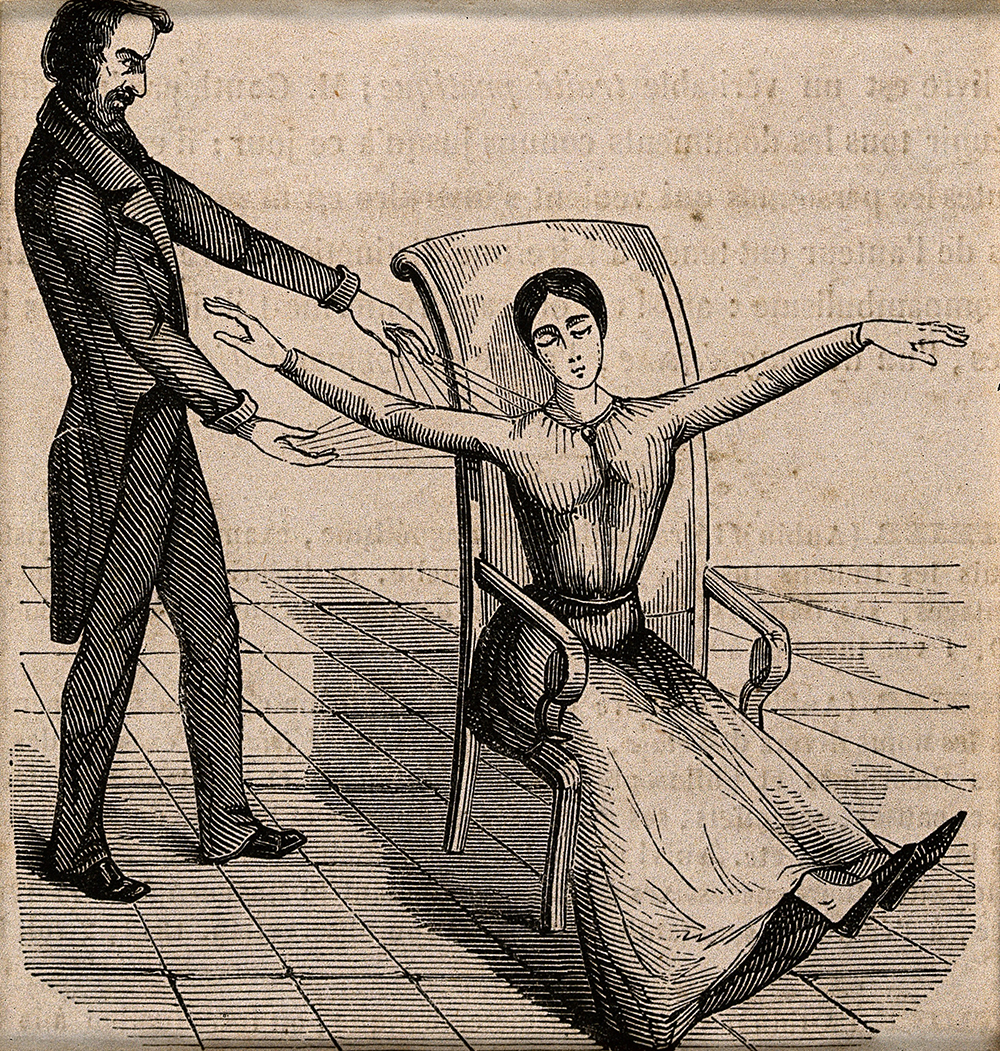 Such a thing could not be permitted to go on, and so—as diplomat John Adams reported to a Boston correspondent—“the King has thought necessary to appoint a number of physicians and academicians, with…Franklin at their head, to enquire into it.” Social order was threatened by Mesmer’s orgasmic cures. So were the faculty of medicine’s earnings in patient fees. Who better than Benjamin Franklin, electrical experimenter and American envoy to France, to protect the values of the Enlightenment? Franklin joined chemist Antoine-Laurent Lavoisier as co-chair of a commission whose members included astronomer Jean-Sylvain Bailly, inventor of the guillotine Joseph-Ignace Guillotin, and other members of the faculties of medicine and the natural sciences.

The commissioners do not appear to have seriously considered that the invisible, imponderable, all-pervasive animal-magnetic fluid might be real. They took their electrometers to one of Mesmer’s hoedowns all the same. The sight is well worth picturing: bewigged men of science fuss with their instruments while, all around, women compromise themselves. The needles of the electrometers alone remain unperturbed. Their stillness proved that animal magnetism, as Adams triumphantly reported, did not exist. But the work of debunking Mesmer’s practice had only just begun. The difficulty facing Franklin and his fellow commissioners was that whatever their doubts about animal magnetism, they did not doubt the sincerity of the patients’ physical responses to Mesmer’s manipulations. As they freely admitted in a report of their experiments, “nothing can be more astonishing than the sight of these convulsions; he that has not had it, can have no idea of it.” The patients were “entirely under the government of the person who distributes the magnetic virtue: in vain they may appear to be in a state of the extremest drowsiness, his voice, a look, a sign from him rouses them.” And yet there was no magnetic virtue.

How does one describe the real bonds people form over false beliefs? As fake news propagates along feeds both human and algorithmic, the question seems newly urgent. But it isn’t new. Franklin and his fellow investigators asked the same thing in 1784. What Mesmer had described as the operation of a physical fluid, they would recast as the work of a social tie. The patients convulsed because they believed in Mesmer, as the commissioners showed in the first set of experiments to isolate the placebo effect—the mind’s power to cure the body—in a blind study. After observing Mesmer’s public process, the commissioners worked with a pupil of Mesmer’s, Charles Deslon, to test the operation of animal magnetism under experimental conditions of their own devising. The commissioners magnetized patients without their knowledge, and pretended to manipulate the mesmeric fluid when in fact they either were doing nothing or were performing Mesmer’s techniques incorrectly. A seamstress waited for the experiments to start while, unknown to her, a magnetist gestured furiously at her from behind a paper panel. A boy believed that a tree in Franklin’s orchard was magnetized. Led to it, he collapsed into a fit. It was a perfectly ordinary tree. The patients’ beliefs alone worked powerfully on their bodies, while mesmerism alone did nothing. To the extent that cures had resulted, it was the patient’s belief in the mesmerist that had done it. 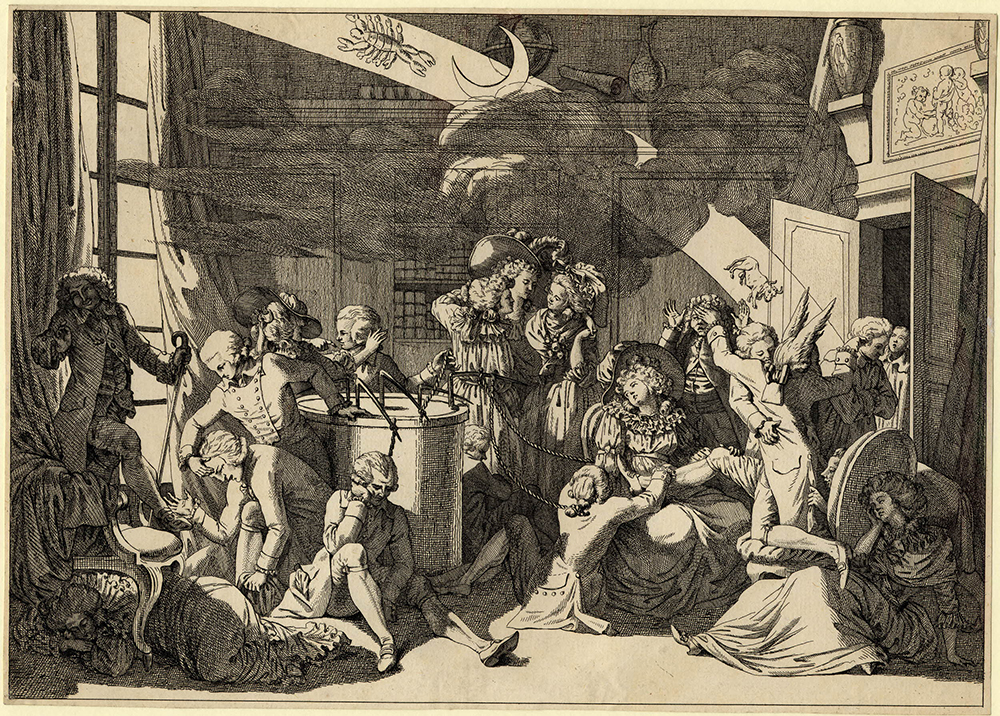 With the publication of the commissioners’ report, Rapport des commissaires chargés par le Roi de l’examen du magnétisme animal (1784), immediately translated into English as the Report of Dr. Benjamin Franklin, and Other Commissioners, Charged by the King of France, with the Examination of the Animal Magnetism, as Now Practised at Paris (1785 [1784]), enlightenment had scored a decisive victory—or so Jefferson seemed to think. (A secret report read by the king, but not published, mentioned things kept out of the disseminated version for reasons of decorum, such as the orgasms Mesmer’s treatment sometimes elicited.)

Like Adams and Franklin, Jefferson was in France on a series of diplomatic assignments. He had heard with alarm that the Marquis de Lafayette, America’s heroic ally during its war for independence and a disciple of Mesmer’s, planned to preach the magnetic gospel while on a U.S. tour. Jefferson’s hopes for a rational citizenry left no room for the spread of an “epidemical” madness like animal magnetism. To forestall Lafayette’s proselytizing, Jefferson wrote to friends in the U.S. announcing Franklin’s victory over Mesmer, enclosing the commissioners’ report. Madison received one of these letters. He replied to Jefferson that there had been the “highest Anxiety” to know about animal magnetism in Williamsburg, Virginia, but the commissioners’ report had “effectually quieted our Concern upon that Score.” Sending the report to astronomer and instrument-maker David Rittenhouse in Philadelphia, Jefferson commented that it had “given a quietus” to animal magnetism.

Quietus was not what resulted. Instead, the commission’s report secured mesmerism’s future. The commissioners’ findings were more unsettled, and unsettling, than Jefferson’s triumphant remarks might indicate. There was, the commissioners admitted, a remarkable power operating in Mesmer’s treatment salon, only it was not animal magnetism. It was credulity. The commissioners spoke of “an extraordinary influence, making itself master of [the patients], and of which he who superintends the process, appears to be the depository.” Appearances aside, this influence did not reside with Mesmer; it resided in the patients’ minds—specifically, in their imaginations. Their belief in the potency of magnetism prompted their imaginations to affect their bodies. The archaic word the commissioners and their translator used, depository, is suggestive. A depository is a person to whom one entrusts an important document, possession, or secret. Thus the patients, as an act of trust, had deposited the apparently magnetic power with Mesmer. It had appeared that Mesmer’s patients were his creatures. In fact, they had created him.

The driving force behind animal magnetism was not the operator’s power to deceive. It was the patient’s power—almost the patient’s wish—to be fooled. When Jefferson predicted a quietus for animal magnetism, he underestimated this power. Mesmerists, for their part, took its true measure. After a brief retrenchment, Mesmer’s heirs adopted the theories of the Franklin commission as their own. They claimed that the power of belief identified by the commissioners was what they had been manipulating all along. Animal magnetism was the physical medium through which our social bonds affect our brains. These heirs of Mesmer were the ones who could harness, explain, and deploy that power. Henceforward, mesmerism would be the science of credulity. It took some time for the new view to crystallize, but it took almost no time at all for it to emerge. Before the commissioners had even printed their report, the pupil of Mesmer’s with whom they worked, Deslon, had already made a proposal along these lines: that animal magnetism was none other than the physical medium of imagination, or belief. 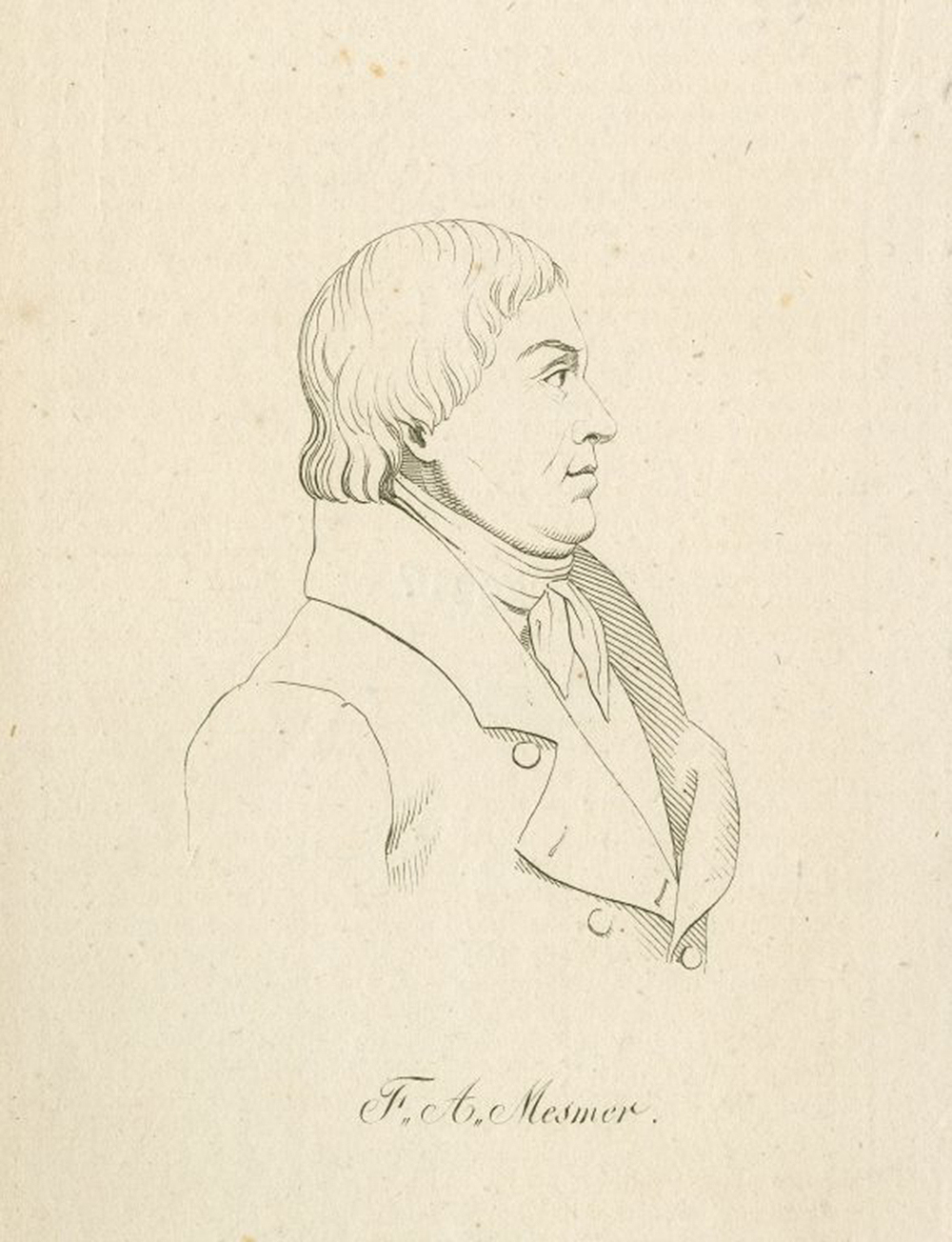 Considered strictly as a rebuttal to the commissioners’ blind tests, Deslon’s proposal was weak. If social bonds and animal magnetism were one and the same, how had the commissioners managed to separate them experimentally, showing that unsuspecting seamstresses would maintain composure, while boys bracing for animal-magnetic infusion would fall, stiff as boards, in orchards? But as mesmeric technique evolved—and the details of the Franklin report faded from memory—the mismatch between the attack and the response mattered less. After a hiatus during the French Revolution, first mesmerism, and then its successor, hypnosis, would both be described by practitioners as organized ways of tapping into the power of belief, or imagination. Just before the Revolution, and for several decades after, the next leaders of the mesmeric movement in France would explain that the priests of false religions in the past had actually used animal magnetism to control their followers. The French periodical Archives du magnétisme animal illustrated the point with an 1822 frontispiece showing the gods of world religions mesmerizing devotees. Hypnotists would call the power that the commissioners had observed suggestion and would deliberately direct it toward patients’ cures—as is still done today, for example, in hypnosis for smoking cessation.

Debunkers take warning. The expose-and-inform strategy that our former presidents pursued has enjoyed a resurgence in a time of ever more intrusive fake news. Fact-checking is a necessary and appropriate journalistic tool. But it is an incomplete political strategy, one that rests on an oversimplified account of charlatanry. The assumption seems to be that the magic of deception rests with the deceiver. If appealing lies could only be dismantled, then movements fomented by them would quiet down. Surely this approach works some of the time to disillusion some people. But as the Franklin commission’s report declared—and as its three presidential champions hardly seemed to hear—the magic of deception also rests with those deceived. Their part is to invest in a bond, not to test the validity of a claim. And their part is real.

Read more about false promises and those who wholeheartedly believe they come true in our special issue A History of Fake News.

Emily Ogden is Assistant Professor of English at the University of Virginia and author of Credulity: A Cultural History of US Mesmerism.