It began a score of years ago, in one of the cotton states. The whiskey which a man named Taylor had drunk prompted him to bring the existence of an urbane person named Sutton to an untimely end. A pistol shot avenged a fancied insult, and the murderer was left unpunished.

The machinery of law was rude in the rough section where the brawl had occurred, and the surviving male representatives of neither the Sutton nor the Taylor families seemed to think it incumbent upon them to give the slayer up to the courts. A year or two after the murder, the Taylor family immigrated to Texas, to avoid danger of future collision with the family of the murdered man. Soon afterward, the Suttons also went to Texas and, as fate would have it, settled in an adjacent county, but each family lived in ignorance of the other’s whereabouts until the close of the late war.

More than a decade had passed since the original “difficulty” between Taylor and Sutton, and one might imagine that the animosity of the injured family would have been somewhat appeased by the flight of time. But a little circumstance, which once more brought the families into collision, resulted in a vendetta which has few parallels in any country, and certainly none in the United States. A young Taylor, finding his desire for adventure stronger than his prudence, made across the county line one day and stole a horse. The theft was discovered, and he was pursued, and fell by the rifle of a Sutton. This aroused all the angry memories of the past, and in a short time neither Taylors nor Suttons dared to leave their houses without being armed to the teeth. Open warfare was declared, and the citizens of the two counties in which the hostile families resided gradually took sides. It is said that as many as twelve hundred persons were at one time so much interested in the vendetta, and so committed to one or the other side of the quarrel, that, had there been a general fight, they would without hesitation have joined in it. If they met on country roads or at taverns or in the marketplaces, the implacable feud was carried on with a more intense bitterness than that of the Montagues and Capulets; a corpse was the result of every meeting; ambushing was common; a dead Taylor lying in front of a clump of bushes, with his brains blown out, marked the vengeance of the Suttons; and a lynched Sutton, taken suddenly from his horse by a gang of desperadoes and hung to a tree, testified to the sleepless hate of the Taylors. At last so many people became embroiled in these occasional murders, which are said to have numbered fifty, that the condition of affairs in the two counties became intolerable. Business and agriculture were almost entirely suspended; the courts were blocked with the suits and countersuits of the two principals in the vendetta, and both sides desperately determined to bring matters to a climax. So they took the field in warlike array. 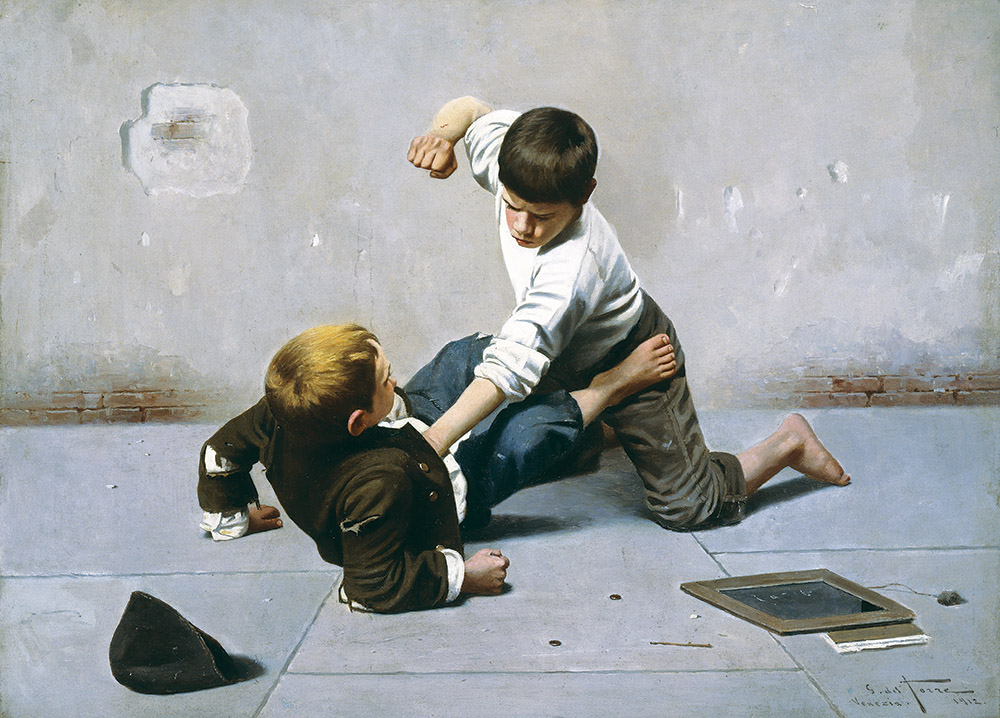 At this juncture, it was discovered that the Suttons were more numerous than the Taylors, and that they also had a larger number of adherents. After some guerrilla warfare, the Taylors were surrounded, and rather than become the victims of a wholesale massacre, they consented to adjourn to the county seat of the county in which they then were and there enter into a solemn compact to cease the vendetta and “call it square.” The compact was made; the two counties were wild with excitement; travel was once more unobstructed, and some confident persons laid aside their arms.

But one month later, as a veteran Sutton was seated with a companion on the deck of a steamer at Indianola about to start for Galveston, a young Taylor shot them both dead. He was subsequently arrested at Galveston, and when, two months ago, he was sent to Indianola for trial, he was accompanied by two militia companies, who had been ordered to protect the majesty of the law against any further pursuance of the most remarkable vendetta of modern times. The murderer now lies in prison awaiting his sentence, and, meantime, the Taylors and Suttons are once more vigorously at war.

The practice of the vendetta in this country is slowly dying out, even on the border, but it dies hard. The family feud has so long been a precious legacy to many southern and southwestern poor whites that, when it is no longer to be counted on, they will feel as if robbed of a treasure. The courts are gradually assuming power to take and try the original offender, and sometimes to see that he meets the fate of his victim only at the end of a rope legally placed about his neck. Prompt action of this kind is the only thing which will effectually annihilate the vendetta in states where every grown man in the backcountry carries deadly weapons. In a few years, the remote section of Texas, over which the Taylors and Suttons have tracked and fought each other for nearly ten years, actuated by a feud whose real origin many of the partisans had forgotten, will be as free from lawless violence as the quietest county in New England or the middle states. But perhaps that blessed time cannot arrive until the last Taylor and the last Sutton have exchanged fatal shots, or until the state government declares outlawed everyone who makes an effort to perpetuate the disgraceful and barbarous battle. If both families would heroically resolve to meet once more at the county town where their late compact was made, and there each and all simultaneously poison themselves, they would gratify the rest of the world.

“A Southern Vendetta.” Published in the New York Times without a byline, this article has been attributed by historians to Jennings, a Philadelphian who served as a Texas Ranger before embarking on a journalism career in New York City. He would have been eighteen when it ran. In 1892, Jennings returned to Texas as a correspondent for the New York Evening Sun. Married to a popular singer, Jennings wrote lyrics, including those to “Remember the Maine,” which he composed after the outbreak of the Spanish-American War in 1898.