The popular notion about marriage and love is that they are synonymous, that they spring from the same motives and cover the same human needs. Like most popular notions this also rests not on actual facts, but on superstition.

Marriage and love have nothing in common; they are as far apart as the poles—are, in fact, antagonistic to each other. No doubt some marriages have been the result of love. Not, however, because love could assert itself only in marriage; much rather is it because few people can completely outgrow a convention. There are today large numbers of men and women to whom marriage is naught but a farce, but who submit to it for the sake of public opinion. At any rate, while it is true that some marriages are based on love, and while it is equally true that in some cases love continues in married life, I maintain that it does so regardless of marriage, and not because of it.

That marriage is a failure none but the very stupid will deny. One has but to glance over the statistics of divorce to realize how bitter a failure marriage really is. Nor will the stereotyped philistine argument that the laxity of divorce laws and the growing looseness of women account for the facts that: first, every twelfth marriage ends in divorce; second, that since 1870 divorces have increased from twenty-eight to seventy-three for every hundred thousand people; third, that adultery, since 1867, as grounds for divorce, has increased 270.8 percent; fourth, that desertion increased 369.8 percent.

From infancy, almost, the average girl is told that marriage is her ultimate goal; therefore her training and education must be directed toward that end. Like the mute beast fattened for slaughter, she is prepared for that. Yet, strange to say, she is allowed to know much less about her function as wife and mother than the ordinary artisan of his trade. It is indecent and filthy for a respectable girl to know anything of the marital relation. Oh, for the inconsistency of respectability, that needs the marriage vow to turn something which is filthy into the purest and most sacred arrangement that none dare question or criticize. Yet that is exactly the attitude of the average upholder of marriage. The prospective wife and mother is kept in complete ignorance of her only asset in the competitive field—sex. Thus she enters into lifelong relations with a man only to find herself shocked, repelled, outraged beyond measure by the most natural and healthy instinct, sex. It is safe to say that a large percentage of the unhappiness, misery, distress, and physical suffering of matrimony is due to the criminal ignorance in sex matters that is being extolled as a great virtue. Nor is it at all an exaggeration when I say that more than one home has been broken up because of this deplorable fact.

The spirit of revolution, the spirit of insurrection, is a spirit radically opposed to liberty.

As to the protection of the woman—therein lies the curse of marriage. Not that it really protects her, but the very idea is so revolting, such an outrage and insult on life, so degrading to human dignity, as to forever condemn this parasitic institution.

It is like that other paternal arrangement—capitalism. It robs man of his birthright, stunts his growth, poisons his body, keeps him in ignorance, in poverty, and dependence, and then institutes charities that thrive on the last vestige of man’s self-respect.

The institution of marriage makes a parasite of woman, an absolute dependent. It incapacitates her for life’s struggle, annihilates her social consciousness, paralyzes her imagination, and then imposes its gracious protection, which is in reality a snare, a travesty on human character.

If motherhood is the highest fulfillment of woman’s nature, what other protection does it need, save love and freedom? Marriage but defiles, outrages, and corrupts her fulfillment. Does it not say to woman, Only when you follow me shall you bring forth life? Does it not condemn her to the block, does it not degrade and shame her if she refuses to buy her right to motherhood by selling herself? Does not marriage only sanction motherhood, even though conceived in hatred, in compulsion? Yet, if motherhood be of free choice, of love, of ecstasy, of defiant passion, does it not place a crown of thorns upon an innocent head and carve in letters of blood the hideous epithet bastard? Were marriage to contain all the virtues claimed for it, its crimes against motherhood would exclude it forever from the realm of love.

Love, the strongest and deepest element in all life, the harbinger of hope, of joy, of ecstasy; love, the defier of all laws, of all conventions; love, the freest, the most powerful molder of human destiny; how can such an all-compelling force be synonymous with that poor little state- and church-begotten weed, marriage?

Free love? As if love is anything but free! Man has bought brains, but all the millions in the world have failed to buy love. Man has subdued bodies, but all the power on earth has been unable to subdue love. Man has conquered whole nations, but all his armies could not conquer love. Man has chained and fettered the spirit, but he has been utterly helpless before love. High on a throne, with all the splendor and pomp his gold can command, man is yet poor and desolate, if love passes him by. And if it stays, the poorest hovel is radiant with warmth, with life and color. Thus love has the magic power to make of a beggar a king. Yes, love is free; it can dwell in no other atmosphere. In freedom it gives itself unreservedly, abundantly, completely. All the laws on the statutes, all the courts in the universe, cannot tear it from the soil, once love has taken root. If, however, the soil is sterile, how can marriage make it bear fruit? It is like the last desperate struggle of fleeting life against death.

Love needs no protection; it is its own protection. So long as love begets life no child is deserted, or hungry, or famished for the want of affection. I know this to be true. I know women who became mothers in freedom by the men they loved. Few children in wedlock enjoy the care, the protection, the devotion free motherhood is capable of bestowing. 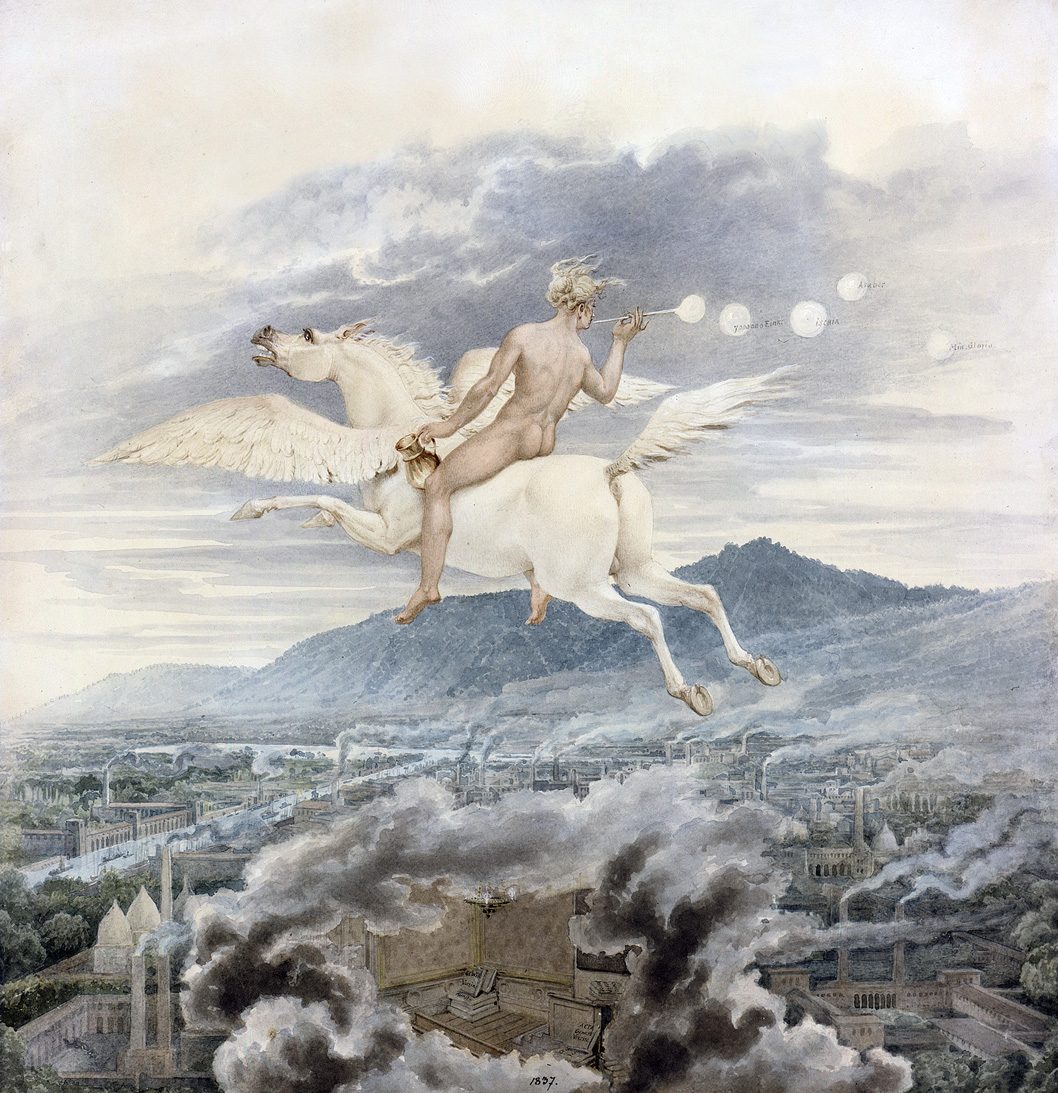 Pegasus Above the City, by Karl Friedrich Schinkel, 1837. Allegorical painting of Prussian statesman Christian Peter Wilhelm Beuth, who founded the Society for the Promotion of Trade Life and spurred growth of the state’s industrial economy. Kupferstichkabinett, Berlin, Germany.

The defenders of authority dread the advent of a free motherhood, lest it will rob them of their prey. Who would fight wars? Who would create wealth? Who would make the policeman, the jailer, if woman were to refuse the indiscriminate breeding of children? The race, the race! shouts the king, the president, the capitalist, the priest. The race must be preserved, though woman be degraded to a mere machine, and the marriage institution is our only safety valve against the pernicious sex awakening of woman. But in vain these frantic efforts to maintain a state of bondage. In vain, too, the edicts of the Church, the mad attacks of rulers, in vain even the arm of the law. Woman no longer wants to be a party to the production of a race of sickly, feeble, decrepit, wretched human beings, who have neither the strength nor moral courage to throw off the yoke of poverty and slavery. Instead she desires fewer and better children, begotten and reared in love and through free choice, not by compulsion, as marriage imposes. Our pseudomoralists have yet to learn the deep sense of responsibility toward the child, that love in freedom has awakened in the breast of woman. Rather would she forgo forever the glory of motherhood than bring forth life in an atmosphere that breathes only destruction and death. And if she does become a mother, it is to give to the child the deepest and best her being can yield. To grow with the child is her motto; she knows that in that manner alone can she help build true manhood and womanhood.

In our present pygmy state, love is indeed a stranger to most people. Misunderstood and shunned, it rarely takes root; or if it does, it soon withers and dies. Its delicate fiber cannot endure the stress and strain of the daily grind. Its soul is too complex to adjust itself to the slimy woof of our social fabric. It weeps and moans and suffers with those who have need of it, yet lack the capacity to rise to love’s summit.

Someday, someday men and women will rise, they will reach the mountain peak, they will meet big and strong and free, ready to receive, to partake, and to bask in the golden rays of love. What fancy, what imagination, what poetic genius can foresee even approximately the potentialities of such a force in the life of men and women. If the world is ever to give birth to true companionship and oneness, not marriage, but love will be the parent

From “Marriage and Love.” Born in Lithuania in 1869, Goldman immigrated to the U.S. in 1885, was arrested for inciting a riot in 1893, founded the periodical Mother Earth in 1906, and published Anarchism and Other Essays in 1910. She lectured on the importance of European playwrights, among them Henrik Ibsen and August Strindberg, and on the concept of free love. Goldman was jailed in 1917 for her activities in opposition to U.S. involvement in World War I and was deported to the Soviet Union in 1919. She died in 1940.

William Shakespeare gives a lesson in taming a shrew. More