When the excitement of the overthrow had died down, the seven conspirators met to discuss the situation in detail. At the meeting certain speeches were made—some of our own countrymen refuse to believe they were actually made at all; nevertheless, they were.

The first speaker was Otanes, and his theme was to recommend the establishment in Persia of democratic government. “I think,” he said, “that the time has passed for any one man among us to have absolute power. Monarchy is neither pleasant nor good. You know to what lengths the pride of power carried Cambyses. How can one fit monarchy into any sound system of ethics when it allows a man to do whatever he likes without any responsibility or control? Even the best of men raised to such a position would be bound to change for the worse—he could not possibly see things as he used to do. The typical vices of a monarch are envy and pride; envy, because it is a natural human weakness, and pride, because excessive wealth and power lead to the delusion that he is something more than a man. These two vices are the root cause of all wickedness: both lead to acts of savage and unnatural violence. Absolute power ought by rights to preclude envy, on the principle that the man who possesses it has also at command everything he could wish for, but in fact it is not so, as the behavior of kings to their subjects proves: they are jealous of the best of them merely for continuing to live and take pleasure in the worst—and no one is readier than a king to listen to talebearers. A king, again, is the most inconsistent of men; show him reasonable respect, and he is angry because you do not abase yourself before his majesty; abase yourself, and he hates you for being a toady. But the worst of all remains to be said­—he breaks up the structure of ancient tradition and law, forces women to serve his pleasure, and puts men to death without trial. Contrast with this the rule of the people: first, it has the finest of all names to describe it—equality under the law and, secondly, the people in power do none of the things that monarchs do. Under a government of the people, a magistrate is appointed by lot and is held responsible for his conduct in office, and all questions are put up for open debate. For these reasons I propose that we do away with the monarchy and raise the people to power, for the state and the people are synonymous terms.” 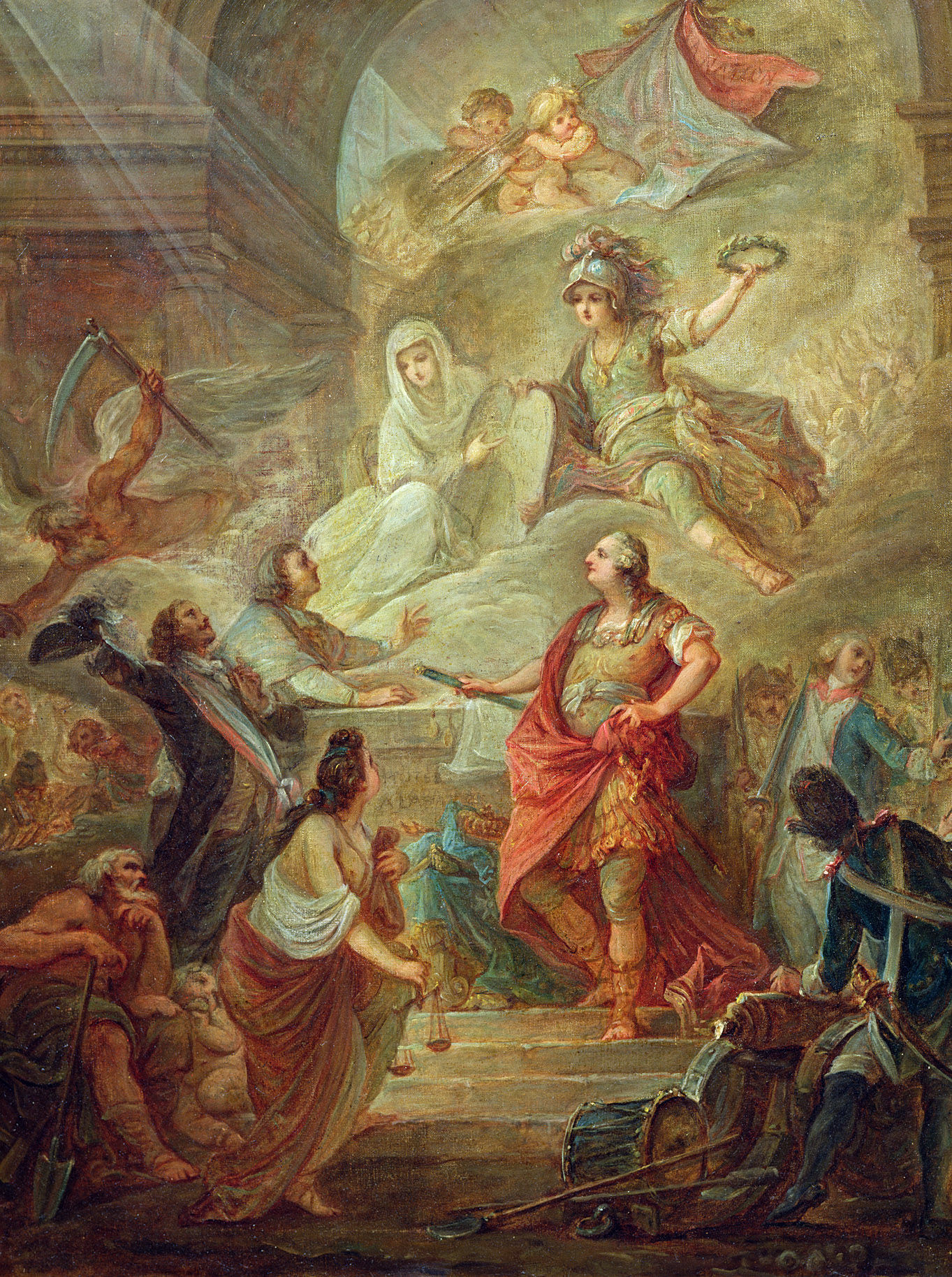 Otanes was followed by Megabyzus, who recommended the principle of oligarchy in the following words: “Insofar as Otanes spoke in favor of abolishing monarchy, I agree with him, but he is wrong in asking us to transfer political power to the people. The masses are a feckless lot—nowhere will you find more ignorance or irresponsibility or violence. It would be an intolerable thing to escape the murderous caprice of a king only to be caught by the equally wanton brutality of the rabble. A king does at least act consciously and deliberately, but the mob does not. Indeed how should it, when it has never been taught what is right and proper and has no knowledge of its own about such things? The masses have not a thought in their heads; all they can do is to rush blindly into politics like a flooding river. As for the people, then, let them govern Persia’s enemies, but let us ourselves choose a certain number of the best men in the country, and give them political power. We personally shall be among them, and it is only natural to suppose that the best men will produce the best policy.”

Darius was the third to speak. “I support,” he said, “all Megabyzus’ remarks about the masses, but I do not agree with what he said of oligarchy. Take the three forms of government we are considering—democracy, oligarchy, and monarchy—and suppose each of them to be the best of its kind; I maintain that the third is greatly preferable to the other two. One ruler: it is impossible to improve upon that—provided he is the best. His judgment will be in keeping with his character; his control of the people will be beyond reproach; his measures against enemies and traitors will be kept secret more easily than under other forms of government. In an oligarchy, the fact that a number of men are competing for distinction in the public serv­ice cannot but lead to violent personal feuds; each of them wants to get to the top and to see his own proposals carried, so they quarrel. Personal quarrels lead to open dissension and then to bloodshed, and from that state of affairs, the only way out is a return to monarchy—a clear proof that monarchy is best. Again, in a democracy malpractices are bound to occur; in this case, however, corrupt dealings in government services lead not to private feuds but to close personal associations, the men responsible for them putting their heads together and mutually supporting one another. And so it goes on, until somebody or other comes forward as the people’s champion and breaks up the cliques that are out for their own interests. This wins him the admiration of the mob, and as a result he soon finds himself entrusted with absolute power—all of which is another proof that the best form of government is monarchy. To sum up: where did we get our freedom from, and who gave it to us? Is it the result of democracy, or of oligarchy, or of monarchy? We were set free by one man, and therefore I propose that we should preserve that form of government, and, further, that we should refrain from changing ancient laws, which have served us well in the past. To do so would lead only to disaster.”

These were the three views set out in the three speeches, and the four men who had not spoken voted for the last. Otanes (who had urged equality before the law), finding the decision against him, then made another speech.

“My friends,” he said, “it is clear that the king will have to be one of us, whether we draw lots for it, or ask the people of Persia to make their choice between us, or use some other method. I will not compete with you for the crown, for I have no wish to rule—or to be ruled either. I withdraw, therefore, upon one condition: that neither I, nor any of my descendants, shall be forced to submit to the rule of that one of you, whomever he is, who becomes king.” The other six agreed to this condition, and Otanes stood down. To this day the family of Otanes continues to be the only free family in Persia and submits to the king only so far as the members of it may choose, while not disobeying the laws of the Persians.

I shall be an autocrat: that’s my trade. And the good Lord will forgive me: that’s his.

The other six then discussed the fairest way of deciding who should have the throne. They agreed that if it fell to any of them, Otanes and his descendants should receive every year a suit of Median clothes and such other gifts as are held to be of most value by the Persians. These privileges were for Otanes only; they also agreed upon another to be shared by all: permission, namely, for any of the seven to enter the royal presence unannounced, except when the king was in bed with a woman. They further agreed that the king should not marry outside the families of the seven confederates. To choose whom should be king, they proposed to mount their horses on the outskirts of the city, and he whose horse neighed first after the sun was up should have the throne.

Darius had a clever groom called Oebares. After the meeting had broken up, he went to see this fellow, and told him of the arrangement they had come to. “So if,” he added, “you can think of some dodge or other, do what you can to see that this prize falls to me, and to no one else.”

“Well, master,” Oebares answered, “if your chance of winning the throne depends upon nothing but that, you may set your mind at rest; you may be perfectly confident—you, and nobody else, will be king. I know a charm which will suit just our purpose.”

“If,” said Darius, “you really have got something that will do the trick, you had better hurry and get it all worked out, for tomorrow is the day.”

Oebares, accordingly, as soon as it was dark, took from the stables the mare which Darius’ horse was particularly fond of, and tied her up on the outskirts of the city. Then he brought along the stallion and led him around and around the mare, getting closer and closer, in narrowing circles, and finally allowed him to mount her. Next morning just before dawn, the six men, according to their agreement, came riding on their horses through the city suburb, and when they reached the spot where the mare had been tethered on the previous night, Darius’ horse started forward and neighed. At the same instant, though the sky was clear, there was a flash of lightning and a clap of thunder: it was a sign from heaven; the election of Darius was assured, and the other five leaped from their saddles and bowed to the ground at his feet.

That is one account of how Oebares made the horse neigh. The Persians also have another, that he rubbed the mare’s genitals and then kept his hand covered inside his breeches. When the sun was rising and the horses were about to be released, he drew his hand out and put it to the nostrils of Darius’ horse, which at the smell of the mare at once snorted and neighed.

In this way Darius became king of Persia.

From The Histories. Held after the seven conspirators overthrew the Magi rulers of Persia, this debate on government, despite Herodotus’ insistence on its veracity, is generally believed to have been largely or entirely invented. Herodotus lived in the middle of the fifth century bc, claiming to have traveled widely in Egypt, Babylonia, Byzantium, and Macedonia. He wrote that he was born in Halicarnassus, a Greek city then under Persian control, which would later become the site of the Mausoleum of Mausolus, considered one of the Seven Wonders of the Ancient World.

Ignorance is strength in the Qin dynasty.More