I have never declined paying the highway tax, because I am as desirous of being a good neighbor as I am of being a bad subject, and as for supporting schools, I am doing my part to educate my fellow countrymen now. It is for no particular item in the tax bill that I refuse to pay it. I simply wish to refuse allegiance to the state, to withdraw and stand aloof from it effectually. I do not care to trace the course of my dollar, if I could, till it buys a man or a musket to shoot one with—the dollar is innocent—but I am concerned to trace the effects of my allegiance. In fact, I quietly declare war with the state, after my fashion, though I will still make what use and get what advantage of her I can, as is usual in such cases.

If others pay the tax which is demanded of me from a sympathy with the state, they do but what they have already done in their own case, or rather they abet injustice to a greater extent than the state requires. If they pay the tax from a mistaken interest in the individual taxed, to save his property, or prevent his going to jail, it is because they have not considered wisely how far they let their private feelings interfere with the public good.

This, then, is my position at present. But one cannot be too much on his guard in such a case, lest his action be biased by obstinacy or an undue regard for the opinions of men. Let him see that he does only what belongs to himself and to the hour.

I think sometimes, Why, this people mean well; they are only ignorant—they would do better if they knew how: why give your neighbors this pain to treat you as they are not inclined to? But I think again, This is no reason why I should do as they do or permit others to suffer much greater pain of a different kind. Again, I sometimes say to myself, When many millions of men, without heat, without ill will, without personal feeling of any kind, demand of you a few shillings only without the possibility, such is their constitution, of retracting or altering their present demand, and without the possibility on your side of appeal to any other millions, why expose yourself to this overwhelming brute force? You do not resist cold and hunger, the winds and the waves, thus obstinately; you quietly submit to a thousand similar necessities. You do not put your head into the fire. But just in proportion as I regard this as not wholly a brute force but partly a human force, and consider that I have relations to those millions as to so many millions of men, and not of mere brute or inanimate things, I see that appeal is possible, first and instantaneously, from them to the Maker of them, and secondly from them to themselves. But if I put my head deliberately into the fire, there is no appeal to fire or to the Maker of fire, and I have only myself to blame. If I could convince myself that I have any right to be satisfied with men as they are and to treat them accordingly, and not according in some respects to my requisitions and expectations of what they and I ought to be, then, like a good Mussulman and fatalist, I should endeavor to be satisfied with things as they are and say it is the will of God. And above all, there is this difference between resisting this and a purely brute or natural force, that I can resist this with some effect, but I cannot expect like Orpheus to change the nature of the rocks and trees and beasts. 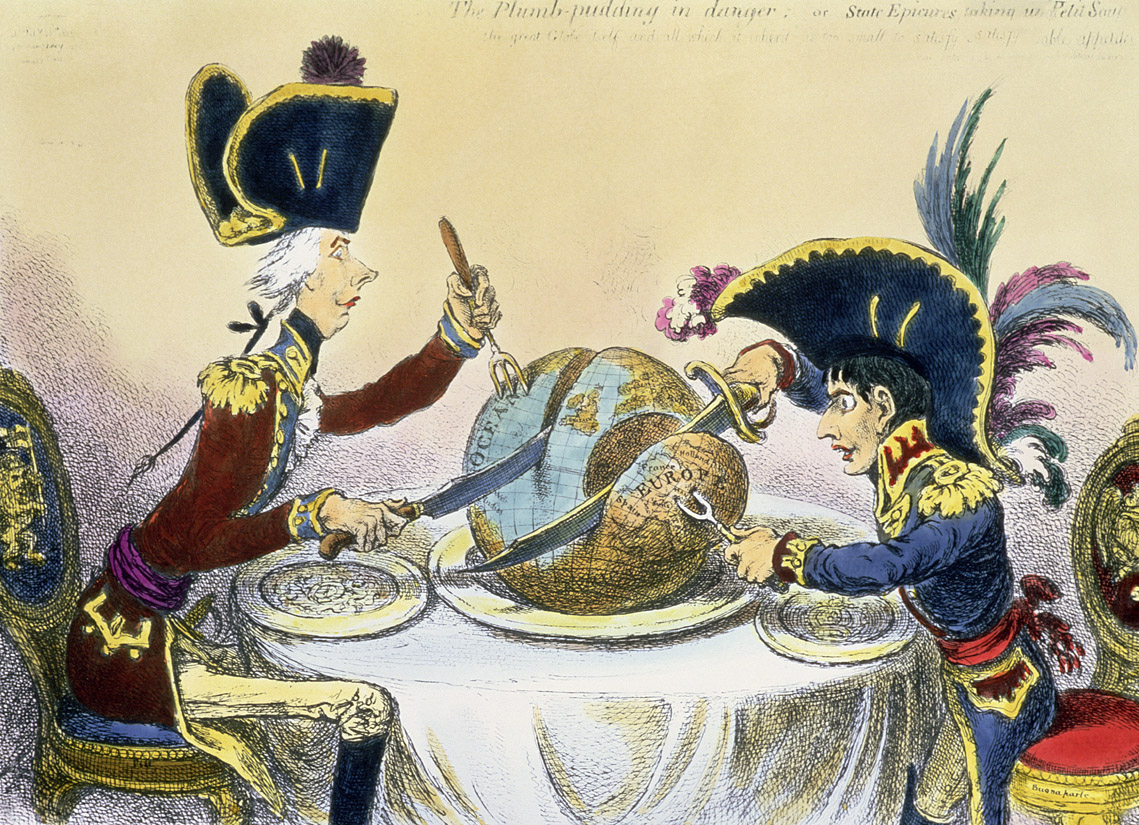 Plum Pudding in Danger, by James Gillray, 1798. The British Museum.

I do not wish to quarrel with any man or nation. I do not wish to split hairs, to make fine distinctions, or set myself up as better than my neighbors. I seek rather, I may say, even an excuse for conforming to the laws of the land. I am but too ready to conform to them. Indeed, I have reason to suspect myself on this head, and each year, as the tax gatherer comes round, I find myself disposed to review the acts and position of the general and state governments and the spirit of the people to discover a pretext for conformity.

We must affect our country as our parents
And if at any time we alienate
Our love or industry from doing it honor,
We must respect effects and teach the soul
Matter of conscience and religion,
And not desire of rule or benefit.

I believe that the state will soon be able to take all my work of this sort out of my hands, and then I shall be no better a patriot than my fellow countrymen. Seen from a lower point of view, the Constitution, with all its faults, is very good; the law and the courts are very respectable; even this state and this American government are in many respects very admirable and rare things to be thankful for, such as a great many have described them; but seen from a point of view a little higher, they are what I have described them; seen from a higher still, and the highest, who shall say what they are, or that they are worth looking at or thinking of at all?

However, the government does not concern me much, and I shall bestow the fewest possible thoughts on it. It is not many moments that I live under a government, even in this world. If a man is thought-free, fancy-free, imagination-free, that which is not never for a long time appearing to be to him, unwise rulers or reformers cannot fatally interrupt him.

I know that most men think differently from myself, but those whose lives are by profession devoted to the study of these or kindred subjects content me as little as any. Statesmen and legislators, standing so completely within the institution, never distinctly and nakedly behold it. They speak of moving society, but have no resting place without it. They may be men of a certain experience and discrimination, and have no doubt invented ingenious and even useful systems for which we sincerely thank them, but all their wit and usefulness lie within certain not-very-wide limits. They are wont to forget that the world is not governed by policy and expediency.

You campaign in poetry. You govern in prose.

No man with a genius for legislation has appeared in America. They are rare in the history of the world. There are orators, politicians, and eloquent men by the thousand, but the speaker has not yet opened his mouth to speak who is capable of settling the much-vexed questions of the day. We love eloquence for its own sake and not for any truth which it may utter, or any heroism it may inspire. Our legislators have not yet learned the comparative value of free trade and of freedom, union, and rectitude to a nation. They have no genius or talent for comparatively humble questions of taxation and finance, commerce and manufactures and agriculture. If we were left solely to the wordy wit of legislators in Congress for our guidance, uncorrected by the seasonable experience and the effectual complaints of the people, America would not long retain her rank among the nations. For eighteen hundred years, though perchance I have no right to say it, the New Testament has been written; yet where is the legislator who has wisdom and practical talent enough to avail himself of the light which it sheds on the science of legislation?

The authority of government, even such as I am willing to submit to—for I will cheerfully obey those who know and can do better than I, and in many things even those who neither know nor can do so well—is still an impure one: to be strictly just, it must have the sanction and consent of the governed. It can have no pure right over my person and property but what I concede to it. The progress from an absolute to a limited monarchy, from a limited monarchy to a democracy, is a progress toward a true respect for the individual. Even the Chinese philosopher was wise enough to regard the individual as the basis of the empire. Is a democracy, such as we know it, the last improvement possible in government? Is it not possible to take a step further toward recognizing and organizing the rights of man? There will never be a really free and enlightened state, until the state comes to recognize the individual as a higher and independent power, from which all its own power and authority are derived, and treats him accordingly. I please myself with imagining a state at last which can afford to be just to all men, and to treat the individual with respect as a neighbor, which even would not think it inconsistent with its own repose if a few were to live aloof from it, not meddling with it, nor embraced by it, who fulfilled all the duties of neighbors and fellow men. A state which bore this kind of fruit and suffered it to drop off as fast as it ripened would prepare the way for a still more perfect and glorious state, which also I have imagined, but not yet anywhere seen.

From “Resistance to Civil Government.” At the age of twenty-seven in 1845, Thoreau left his family’s pencil business and built a cabin on the shores of Walden Pond, a plot of land owned by his friend Ralph Waldo Emerson. In July 1846 he spent one night in jail for refusing to pay his poll taxes; he was released when someone paid it for him. The experience helped to inspire these statements on man and government, later retitled “Civil Disobedience,” where he remarks, “Under a government which imprisons any unjustly, the true place for a just man is also a prison.”