It is widely believed that Alexander wished people to prostrate themselves in his presence. This was due partly to the notion that his father was not Philip but Amon, and partly to his growing admiration, expressed also by the change in his dress and in the general etiquette of his court, of Median and Persian extravagance. There were plenty of people, moreover, who, to flatter him, submitted to this servile behavior: Anaxarchus the sophist was one of the worst—and the Argive poet Agis.

There was one man, however, who did not approve of these innovations. This was the historian Callisthenes of Olynthus, a pupil of Aristotle. Thus far I agree with Callisthenes, but he was a somewhat tactless man, and his remark (if it has been rightly reported) that, without the history he was writing, Alexander and his work would be forgotten, was, I feel, most unfortunate. He used to declare that he had come not in the hope of honor for himself but merely to spread Alexander’s fame throughout the world.

I will now relate a widely accepted story about Callisthenes’ opposition to Alexander in this matter of prostration. Alexander had arranged with the sophists and the Persian and Median noblemen at his court that the subject should be brought up one day at a party. The discussion was begun by Anaxarchus, who declared that Alexander had a better claim upon them to be considered divine than Dionysus or Hercules. The reason for this was not merely his brilliant and successful career but also the fact that neither Dionysus nor Hercules were connected with Macedonia: Dionysus belonged to Thebes and Hercules to Argos—the latter’s only connection with Macedonia was through Alexander, who had his blood in his veins. This being so, there would be greater propriety in the Macedonians paying divine honors to their own king. In any case there was no doubt that they would honor him as a god after he had left this world; would it not, therefore, be in every way better to offer him this tribute now, while he was alive, and not wait until he was dead and could get no good of it?

Those who were, so to put it, “in the know” expressed their approval of what Anaxarchus said and were only too willing to begin prostrating themselves forthwith, but the Macedonians—or most of them—who were present strongly dissented, and said nothing. Suddenly Callisthenes intervened. “For my part,” he said, “I hold Alexander fit for any mark of honor that a man may earn, but do not forget that there is a difference between honoring a man and worshipping a god. The distinction between the two has been marked in many ways: for instance, by the building of temples, the erection of statues, the dedication of sacred ground—all these are for gods; again, for gods sacrifice is offered and libations are poured; hymns are composed for the worship of gods, while panegyrics are written for the praise of men. Yet of all these things not one is so important as this very custom of prostration. Men greet each other with a kiss, but a god, far above us on his mysterious throne, it is not lawful for us to touch—and that is why we proffer him the homage of bowing to the earth before him.

The tree of liberty must be refreshed from time to time with the blood of patriots and tyrants. It is its natural manure.

“Again, for the worship of gods we perform the ceremonial dance and sing the song of praise. There is nothing surprising in this, for even the gods are worshipped by varying forms of ceremonial, and heroes and demigods, remember, have, again, their own peculiar, and quite different, rites.

“It is wrong, therefore, to ignore these distinctions; we ought not to make a man look bigger than he is by paying him excessive and extravagant honor or, at the same time, to impiously degrade the gods (if such a thing were possible) by putting them in this matter on the same level as men. Suppose some fellow or other, by some quite unjustified vote or show of hands, were brought to enjoy royal honors: would Alexander tolerate it? Of course he would not. By the same reasoning there are much better grounds for the gods’ resentment against men who invest themselves with divine honors or allow other people to do it for them.

“Now, Alexander deserves his reputation of being incomparably the bravest of the brave, the most kingly of kings, the worthiest to command of all commanders. And you, Anaxarchus—you who are admitted to Alexander’s presence for the express purpose of instructing him in the truth—you, above all people, should have been the first to speak as I am speaking; you should have stopped the mouth of anyone who dared argue on the other side. To take the lead in the way you did was a disgraceful thing: you ought to have remembered that you are not the attendant and adviser of Cambyses or Xerxes but of Philip’s son, a man with the blood of Hercules and Aeacus in his veins, a man whose forefathers came from Argos to Macedonia, where they long ruled not by force but by law.

“Again, not even Hercules was accorded divine honors by the Greeks while he was alive—nor when he was dead either, until the command to do so was given by an oracle of Apollo at Delphi. Well, here we are in a foreign land, and if for that reason we must think foreign thoughts, yet I beg you, Alexander, to remember Greece; it was for her sake alone that you might add Asia to her empire, that you undertook this campaign. Consider this too: when you are home again, do you really propose to force the Greeks, who love their liberty more than anyone else in the world, to prostrate themselves before you? Or will you let the Greeks off and impose this shameful duty only on the Macedonians? Or will you make a broad and general distinction in the matter, and ordain that barbarians only should keep their barbarous manners, while Greeks and Macedonians honor you honorably as a man, according to the traditions of Greece? 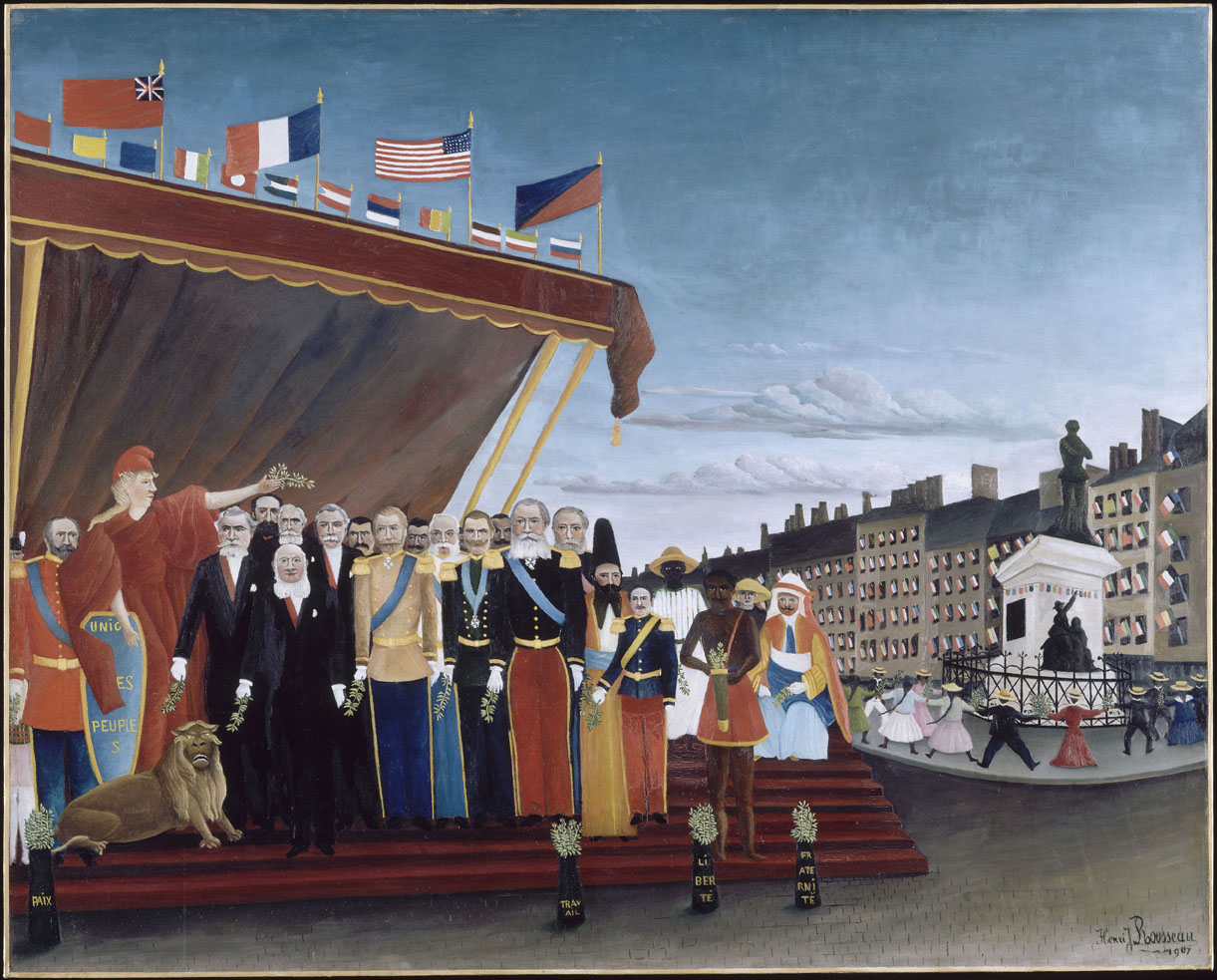 The Representatives of Foreign Powers Coming to Salute the Republic as a Sign of Peace, by Henri Rousseau, 1907. Musée Picasso, Paris.

“It is said that Cyrus, son of Cambyses, was the first man to receive the homage of prostration and that this humiliating custom thereafter became an accepted thing in Persia. So be it; nonetheless you must remember that the great Cyrus was cured of his pride by a tribe of Scythians—poor men, but free; that Darius was humbled by Scythians too, as Xerxes was by Athens and Sparta, and Artaxerxes by the Ten Thousand of Clearchus and Xenophon. And now Alexander has robbed another Darius of his pride—though no man has yet bowed to the earth before him.”

This speech vexed Alexander profoundly but not the Macedonians, who found what he said very much to their mind. Alexander was aware of this, and told the Macedonians accordingly to forget the matter: the need to prostrate themselves would not in future arise.

From The Anabasis of Alexander. Alexander ascended the throne around the age of twenty upon the assassination of his father, Philip II of Macedonia, in 336 bc. He soon began minting coinage with his portrait on one side and Hercules, from whom he claimed descent, on the other. Writing some four hundred years later, Arrian stated that Alexander at Troy laid a wreath “on the tomb of Achilles, calling him a lucky man, in that he had Homer to proclaim his deeds and preserve his memory.” Alexander took ill and died in Babylon in 323 bc; his body was buried in a golden coffin in Alexandria, the city in Egypt founded by and named after him.

The head of Medusa, in myth and in memory. More