It was announced in the Winnemac Daily News that Dr. Geake had been called from the chair of otolaryngology to the vice presidency of the puissant New Idea Medical Instrument and Furniture Company of Jersey City. In celebration he gave a final address to the entire medical school on “The Art and Science of Furnishing the Doctor’s Office.”

He was a neatly finished person, Geake, eyeglassed and enthusiastic and fond of people. He beamed on his loving students and cried:

“Gentlemen: the trouble with too many doctors, even those splendid old pioneer warhorses who through mud and storm, through winter’s chill blast and August’s untempered heat, go bringing cheer and surcease from pain to the world’s humblest, yet even these old Nestors not so infrequently settle down in a rut and never shake themselves loose. Now that I am leaving this field where I have labored so long and happily, I want to ask every manjack of you to read, before you begin to practice medicine, not merely your Rosenau and Howell and Gray, but also, as a preparation for being that which all good citizens must be, namely, practical men, a most valuable little manual of modern psychology, ‘How to Put Pep in Salesmanship,’ by Grosvenor A. Bibby. For don’t forget, gentlemen—and this is my last message to you—the man worthwhile is not merely the man who takes things with a smile but also the man who’s trained in philosophy, practical philosophy, so that instead of daydreaming and spending all this time talking about ‘ethics,’ splendid though they are, and ‘charity,’ glorious virtue though that be, yet he never forgets that unfortunately the world judges a man by the amount of good hard cash he can lay away. The graduates of the University of Hard Knocks judge a physician as they judge a businessman, not merely by his alleged ‘high ideals,’ but by the horsepower he puts into carrying them out—and making them pay! And from a scientific standpoint, don’t overlook the fact that the impression of properly remunerated competence which you make on a patient is of just as much importance in these days of the new psychology as the drugs you get into him or the operations he lets you get away with. The minute he begins to see that other folks appreciate and reward your skill, that minute he must begin to feel your power and so to get well.

Health indeed is a precious thing, to recover and preserve which we undergo any misery, drink bitter potions, freely give our goods—restore a man to his health, his purse lies open to thee.

“Nothing is more important in inspiring him than to have such an office that as soon as he steps into it, you have begun to sell him the idea of being properly cured. I don’t care whether a doctor has studied in Germany, Munich, Baltimore, and Rochester. I don’t care whether he has all science at his fingertips, whether he can instantly diagnose with a considerable degree of accuracy the most obscure ailment, whether he has the surgical technique of a Mayo, a Crile, a Blake, an Ochsner, a Cushing. If he has a dirty old office, with hand-me-down chairs and a lot of secondhand magazines, then the patient isn’t going to have confidence in him; he is going to resist the treatment—and the doctor is going to have difficulty in putting over and collecting an adequate fee.

“To go far below the surface of this matter into the fundamental philosophy and aesthetics of office furnishing for the doctor, there are today two warring schools—the Tapestry School and the Aseptic School, if I may venture to so denominate and conveniently distinguish them. Both of them have their merits. The Tapestry School claims that luxurious chairs for waiting patients, handsome hand-painted pictures, a bookcase jammed with the world’s best literature in expensively bound sets, together with cut-glass vases and potted palms, produce an impression of that opulence which can come only from sheer ability and knowledge. The Aseptic School, on the other hand, maintains that what the patient wants is that appearance of scrupulous hygiene which can be produced only by furnishing the outer waiting room as well as the inner offices in white-painted chairs and tables, with merely a Japanese print against a gray wall.

“But, gentlemen, it seems obvious to me, so obvious that I wonder it has not been brought out before, that the ideal reception room is a combination of these two schools! Have your potted palms and handsome pictures—to the practical physician they are as necessary a part of his working equipment as a sterilizer or a Baumanometer. But so far as possible have everything in sanitary-looking white—and think of the color schemes you can evolve, or the good wife for you, if she be one blessed with artistic tastes! Rich golden or red cushions, in a Morris chair enameled the purest white! A floor covering of white enamel, with just a border of delicate rose! Recent and unspotted numbers of expensive magazines, with art covers, lying on a white table! Gentlemen, there is the idea of imaginative salesmanship which I wish to leave with you; there is the gospel which I hope to spread in my fresh field of endeavor, the New Idea Instrument Company of Jersey City, where at any time I shall be glad to see and shake by the hand any and all of you.”

From Arrowsmith. In 1926 Lewis declined a Pulitzer Prize since it was awarded not on literary grounds but on the work’s ability to attest to “the wholesome atmosphere of American life.” In 1930 he became the first American recipient of the Nobel Prize for Literature, having published Main Street, Babbitt, and Arrowsmith in the previous decade. He died an alcoholic in 1951 at the age of sixty-five. 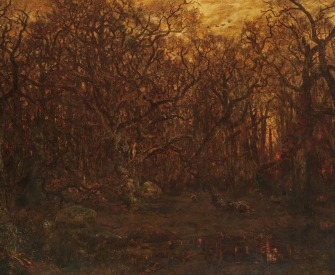 In Search of Fear

Notes from a high-wire artist. More

Benvenuto Cellini gets what he wants. More