A little before twelve o’clock we three—Arthur, Quincey Morris, and myself—called for Professor Van Helsing. It was odd to notice that by common consent we had all put on black clothes. Of course, Arthur wore black, for he was in deep mourning for Lucy, but the rest of us wore it by instinct. We got to the churchyard by half-past one and strolled about, keeping out of official observation, so that when the gravediggers had completed their task and the sexton, under the belief that everyone had gone, had locked the gate, we had the place all to ourselves. Van Helsing, instead of his little black bag, had with him a long leather one, something like a cricketing bag; it was manifestly of fair weight.

When we were alone and had heard the last of the footsteps die out up the road, we silently, and as if by ordered intention, followed the professor to Lucy’s tomb. He unlocked the door, and we entered, closing it behind us. Then he took from his bag a lantern, which he lit, and also two wax candles, which, when lighted, he stuck by melting their own ends on other coffins so that they might give light sufficient to work by. When he lifted the lid off Lucy’s coffin we all looked—Arthur trembling like an aspen—and saw that the body lay there in all its death beauty. But there was no love in my own heart, nothing but loathing for the foul Thing which had taken Lucy’s shape without her soul. I could see even Arthur’s face grow hard as he looked. Presently he said to Van Helsing, “Is this really Lucy’s body, or only a demon in her shape?” 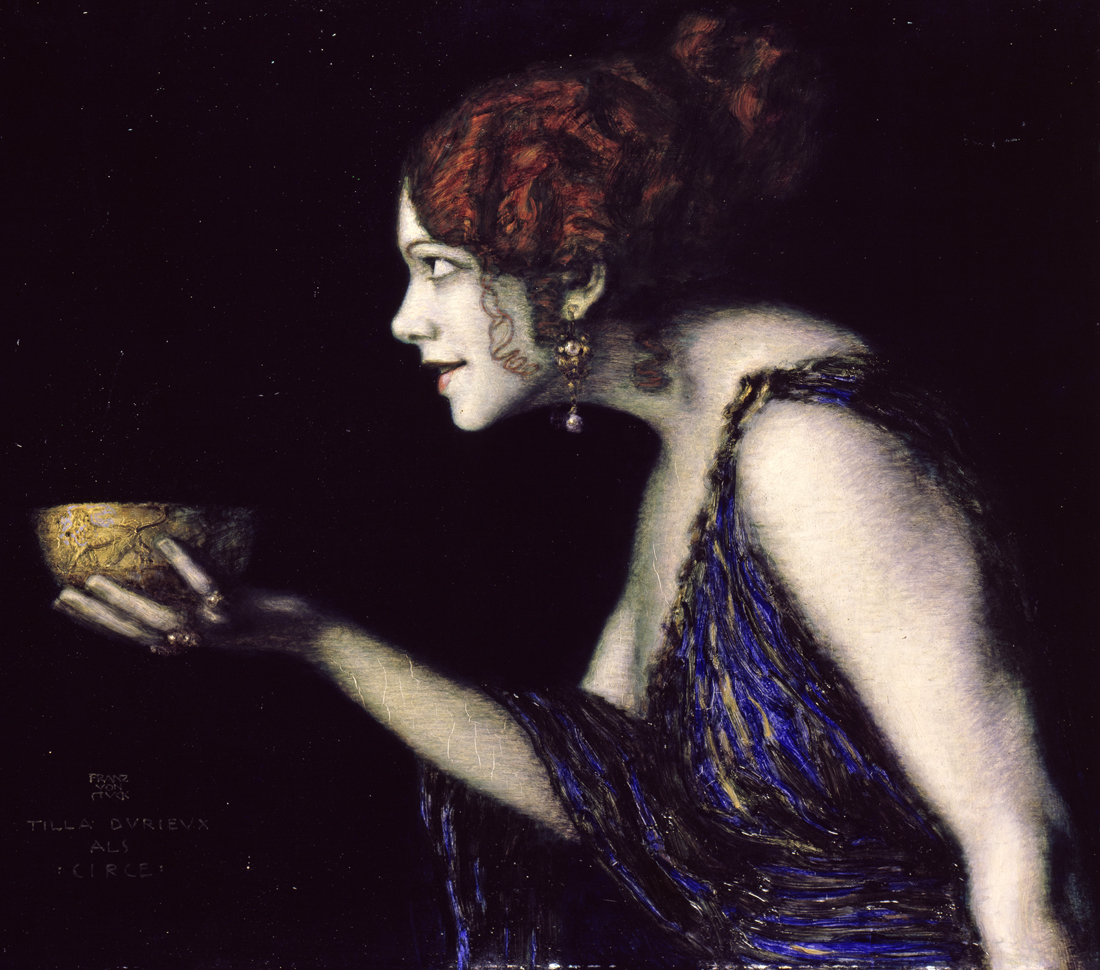 She seemed like a nightmare of Lucy as she lay there; the pointed teeth, the bloodstained, voluptuous mouth—which made one shudder to see—the whole carnal and unspiritual appearance, seeming like a devilish mockery of Lucy’s sweet purity. Van Helsing, with his usual methodicalness, began taking the various contents from his bag and placing them ready for use. First he took out a soldering iron and some plumbing solder, and then a small oil lamp, which gave out, when lit in a corner of the tomb, gas which burned at fierce heat with a blue flame; then his operating knives, which he placed to hand; and last a round wooden stake, some two and a half or three inches thick and about three feet long. One end of it was hardened by charring in the fire and was sharpened to a fine point. With this stake came a heavy hammer, such as in households is used in the coal cellar for breaking the lumps. To me, a doctor’s preparations for work of any kind are stimulating and bracing, but the effect of these things on both Arthur and Quincey was to cause them a sort of consternation. They both, however, kept their courage, and remained silent and quiet.

When all was ready, Van Helsing said, “Before we do anything, let me tell you this; it is out of the lore and experience of the ancients and of all those who have studied the powers of the undead. When they become such, there comes with the change the curse of immortality; they cannot die, but must go on age after age adding new victims and multiplying the evils of the world; for all that die from the preying of the undead become themselves undead, and prey on their kind. And so the circle goes on ever widening, like as the ripples from a stone thrown in the water. Friend Arthur, if you had met that kiss which you know of before poor Lucy died; or again, last night when you opened your arms to her, you would in time, when you had died, have become nosferatu, as they call it in Eastern Europe, and would all time make more of those undeads that so have filled us with horror. The career of this so-unhappy dear lady is but just begun. Those children whose blood she sucks are not as yet so much the worse, but if she lives on, undead, more and more they lose their blood and by her power over them they come to her; and so she draws their blood with that so-wicked mouth. But if she dies in truth, then all cease; the tiny wounds of the throats disappear, and they go back to their plays unknowing ever of what has been. But of the most blessed of all, when this now-undead be made to rest as true dead, then the soul of the poor lady whom we love shall again be free. Instead of working wickedness by night and growing more debased in the assimilation of it by day, she shall take her place with the other angels. So that, my friend, it will be a blessed hand for her that shall strike the blow that sets her free. To this I am willing, but is there none among us who has a better right? Will it be no joy to think of hereafter in the silence of the night when sleep is not: ‘It was my hand that sent her to the stars; it was the hand of him that loved her best, the hand that of all she would herself have chosen, had it been to her to choose?’ Tell me if there be such a one among us?”

We all looked at Arthur. He saw, too, what we all did, the infinite kindness which suggested that his should be the hand which would restore Lucy to us as a holy memory; he stepped forward and said bravely, though his hand trembled, and his face was as pale as snow, “My true friend, from the bottom of my broken heart I thank you. Tell me what I am to do, and I shall not falter!” Van Helsing laid a hand on his shoulder and said, “Brave lad! A moment’s courage, and it is done. This stake must be driven through her. It will be a fearful ordeal—be not deceived in that—but it will be only a short time, and you will then rejoice more than your pain was great; from this grim tomb you will emerge as though you tread on air. But you must not falter when once you have begun. Only think that we, your true friends, are round you, and that we pray for you all the time.”

“Take this stake in your left hand, ready to place the point over the heart, and the hammer in your right. Then when we begin our prayer for the dead—I shall read him, I have here the book, and the others shall follow—strike in God’s name, that so all may be well with the dead that we love and that the undead pass away.”

Nothing is so easy to fake as the inner vision.

Arthur took the stake and the hammer, and when once his mind was set on action, his hands never trembled nor even quivered. Van Helsing opened his missal and began to read, and Quincey and I followed as well as we could. Arthur placed the point over the heart, and as I looked I could see its dint in the white flesh. Then he struck with all his might.

The Thing in the coffin writhed, and a hideous, bloodcurdling screech came from the opened red lips. The body shook and quivered and twisted in wild contortions; the sharp white teeth champed together till the lips were cut, and the mouth was smeared with a crimson foam. But Arthur never faltered. He looked like a figure of Thor as his untrembling arm rose and fell, driving deeper and deeper the mercy-bearing stake, while the blood from the pierced heart welled and spurted up around it. His face was set, and high duty seemed to shine through it; the sight of it gave us courage, so that our voices seemed to ring through the little vault.

And then the writhing and quivering of the body became less, and the teeth seemed to champ, and the face to quiver. Finally it lay still. The terrible task was over.

The hammer fell from Arthur’s hand. He reeled and would have fallen had we not caught him. The great drops of sweat sprang from his forehead, and his breath came in broken gasps. It had indeed been an awful strain on him, and had he not been forced to his task by more than human considerations he could never have gone through with it. For a few minutes we were so taken up with him that we did not look toward the coffin. When we did, however, a murmur of startled surprise ran from one to the other of us. We gazed so eagerly that Arthur rose, for he had been seated on the ground, and came and looked too; and then a glad, strange light broke over his face and dispelled altogether the gloom of horror that lay upon it.

There, in the coffin lay no longer the foul Thing that we had so dreaded and grown to hate that the work of her destruction was yielded as a privilege to the one best entitled to it, but Lucy as we had seen her in her life, with her face of unequaled sweetness and purity. True that there were there, as we had seen them in life, the traces of care and pain and waste; but these were all dear to us, for they marked her truth to what we knew. One and all, we felt that the holy calm that lay like sunshine over the wasted face and form was only an earthly token and symbol of the calm that was to reign forever.

From Dracula: A Mystery Story. Born in Clontarf, Ireland, in 1847, Stoker published his most famous novel in 1897, after having earned a degree in mathematics, worked as a civil servant while writing drama reviews, and served as the actor Henry Irving’s manager for twenty-seven years. Among the facial characteristics that Stoker attributed to Count Dracula were thick eyebrows “almost meeting over the nose,” “extremely pointed” ears, red eyes, “peculiarly arched” nostrils, and “sharp white teeth” that “protruded over the lips.”

The transfiguring language of music.More