David Hardy of Winesburg, Ohio, was the grandson of Jesse Bentley, the owner of Bentley farms. When he was twelve years old, he went to the old Bentley place to live.

His mother, Louise Bentley, the girl who came into the world on that night when Jesse ran through the fields crying to God that he be given a son, had grown to womanhood on the farm and had married young John Hardy of Winesburg, who became a banker. Louise and her husband did not live happily together, and everyone agreed that she was to blame. She was a small woman with sharp gray eyes and black hair. From childhood she had been inclined to fits of temper, and when not angry, she was often morose and silent. In Winesburg it was said that she drank. Her husband, the banker, who was a careful, shrewd man, tried hard to make her happy. When he began to make money, he bought for her a large brick house on Elm Street in Winesburg, and he was the first man in that town to keep a man­servant to drive his wife’s carriage.

But Louise could not be made happy. She flew into half-insane fits of temper during which she was sometimes silent, sometimes noisy and quarrelsome. She swore and cried out in her anger. She got a knife from the kitchen and threatened her husband’s life. Once she deliberately set fire to the house, and often she hid herself away for days in her own room and would see no one. Her life, lived as a half recluse, gave rise to all sorts of stories concerning her. It was said that she took drugs and that she hid herself away from people because she was often so under the influence of drink that her condition could not be concealed. Sometimes on summer afternoons, she came out of the house and got into her carriage. Dismissing the driver, she took the reins in her own hands and drove off at top speed through the streets. If a pedestrian got in her way, she drove straight ahead, and the frightened citizen had to escape as best he could. To the people of the town, it seemed as though she wanted to run them down. When she had driven through several streets, tearing around corners and beating the horses with the whip, she drove off into the country. On the country roads, after she had gotten out of sight of the houses, she let the horses slow down to a walk, and her wild, reckless mood passed. She became thoughtful and muttered words. Sometimes tears came into her eyes. And then when she came back into town, she again drove furiously through the quiet streets. But for the influence of her husband and the respect he inspired in people’s minds, she would have been arrested more than once by the town marshal.

Happiness is no laughing matter.

Young David Hardy grew up in the house with this woman, and as can well be imagined there was not much joy in his childhood. He was too young then to have opinions of his own about people, but at times it was difficult for him not to have very definite opinions about the woman who was his mother. David was always a quiet, orderly boy and for a long time was thought by the people of Winesburg to be something of a dullard. His eyes were brown, and as a child he had a habit of looking at things and people a long time without appearing to see what he was looking at. When he heard his mother spoken of harshly or when he overheard her berating his father, he was frightened and ran away to hide. Sometimes he could not find a hiding place, and that confused him. Turning his face toward a tree or, if he was indoors, toward the wall, he closed his eyes and tried not to think of anything. He had a habit of talking aloud to himself, and early in life a spirit of quiet sadness often took possession of him.

On the occasions when David went to visit his grandfather on the Bentley farm, he was altogether contented and happy. Often he wished that he would never have to go back to town, and once when he had come home from the farm after a long visit, something happened that had a lasting effect on his mind.

David had come back into town with one of the hired men. The man was in a hurry to go about his own affairs and left the boy at the head of the street in which the Hardy house stood. It was early dusk of a fall evening, and the sky was overcast with clouds. Something happened to David. He could not bear to go into the house where his mother and father lived, and on an impulse he decided to run away from home. He intended to go back to the farm and to his grandfather but lost his way, and for hours he wandered weeping and frightened on country roads. It started to rain, and lightning flashed in the sky. The boy’s imagination was excited, and he fancied that he could see and hear strange things in the darkness. Into his mind came the conviction that he was walking and running in some terrible void where no one had ever been before. The darkness about him seemed limitless. The sound of the wind blowing in trees was terrifying. When a team of horses approached along the road in which he walked, he was frightened and climbed a fence. Through a field he ran until he came into another road and, getting upon his knees, felt of the soft ground with his fingers. But for the figure of his grandfather, whom he was afraid he would never find in the darkness, he thought the world must be altogether empty. When his cries were heard by a farmer who was walking home from town and he was brought back to his father’s house, he was so tired and excited that he did not know what was happening to him. 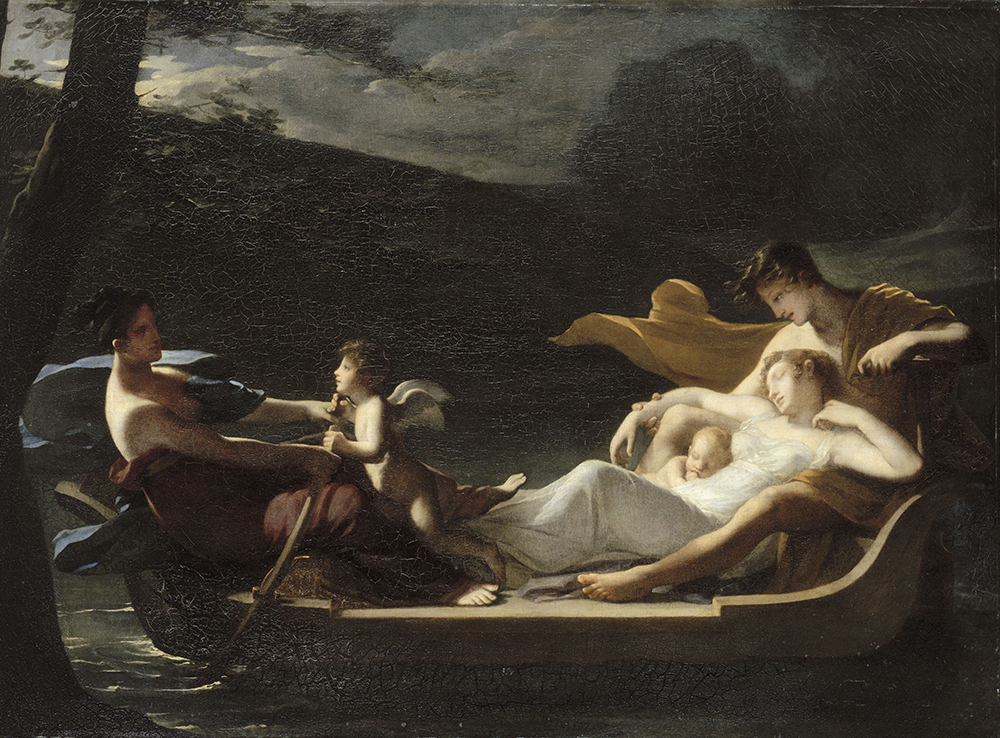 By chance David’s father knew that he had disappeared. On the street he had met the farmhand from the Bentley place and knew of his son’s return to town. When the boy did not come home, an alarm was set up and John Hardy with several men of the town went to search the country. The report that David had been kidnapped ran about through the streets of Winesburg. When he came home there were no lights in the house, but his mother appeared and clutched him eagerly in her arms. David thought she had suddenly become another woman. He could not believe that so delightful a thing had happened. With her own hands, Louise Hardy bathed his tired young body and cooked him food. She would not let him go to bed but, when he had put on his nightgown, blew out the lights and sat down in a chair to hold him in her arms. For an hour the woman sat in the darkness and held her boy. All the time she kept talking in a low voice. David could not understand what had so changed her. Her habitually dissatisfied face had become, he thought, the most peaceful and lovely thing he had ever seen. When he began to weep, she held him more and more tightly. On and on went her voice. It was not harsh or shrill as when she talked to her husband, but was like rain falling on trees. Presently men began coming to the door to report that he had not been found, but she made him hide and be silent until she had sent them away. He thought it must be a game his mother and the men of the town were playing with him and laughed joyously. Into his mind came the thought that his having been lost and frightened in the darkness was an altogether unimportant matter. He thought that he would have been willing to go through the frightful experience a thousand times to be sure of finding at the end of the long black road a thing so lovely as his mother had suddenly become.

From “Godliness.” The collection Winesburg, Ohio, in which this story appears, is based on the author’s memories of growing up in Clyde, Ohio. Anderson later moved to Virginia and bought two newspapers—one Republican, one Democratic—briefly working as a publisher and reporter. In an editorial, he advised readers on how to please an author. One method: committing one sentence from their book to memory. “The happiness you will bring to your author will repay you for your trouble,” he wrote. “It does not matter what sentence you choose.”