First Friend: The good time of day to you, sir.

Second Friend: I also wish it to you. I think this honorable lord did but try us this other day.

First Friend: Upon that were my thoughts tiring when we encountered. I hope it is not so low with him as he made it seem in the trial of his several friends.

Second Friend: It should not be, by the persuasion of his new feasting.

First Friend: I should think so. He hath sent me an earnest inviting, which many my near occasions did urge me to put off; but he hath conjured me beyond them, and I must needs appear.

Second Friend: In like manner was I in debt to my importunate business, but he would not hear my excuse. I am sorry, when he sent to borrow of me, that my provision was out.

First Friend: I am sick of that grief, too, as I understand how all things go.

Second Friend: Every man here’s so. What would he have borrowed of you?

First Friend: What of you?

Second Friend: He sent to me, sir—Here he comes. 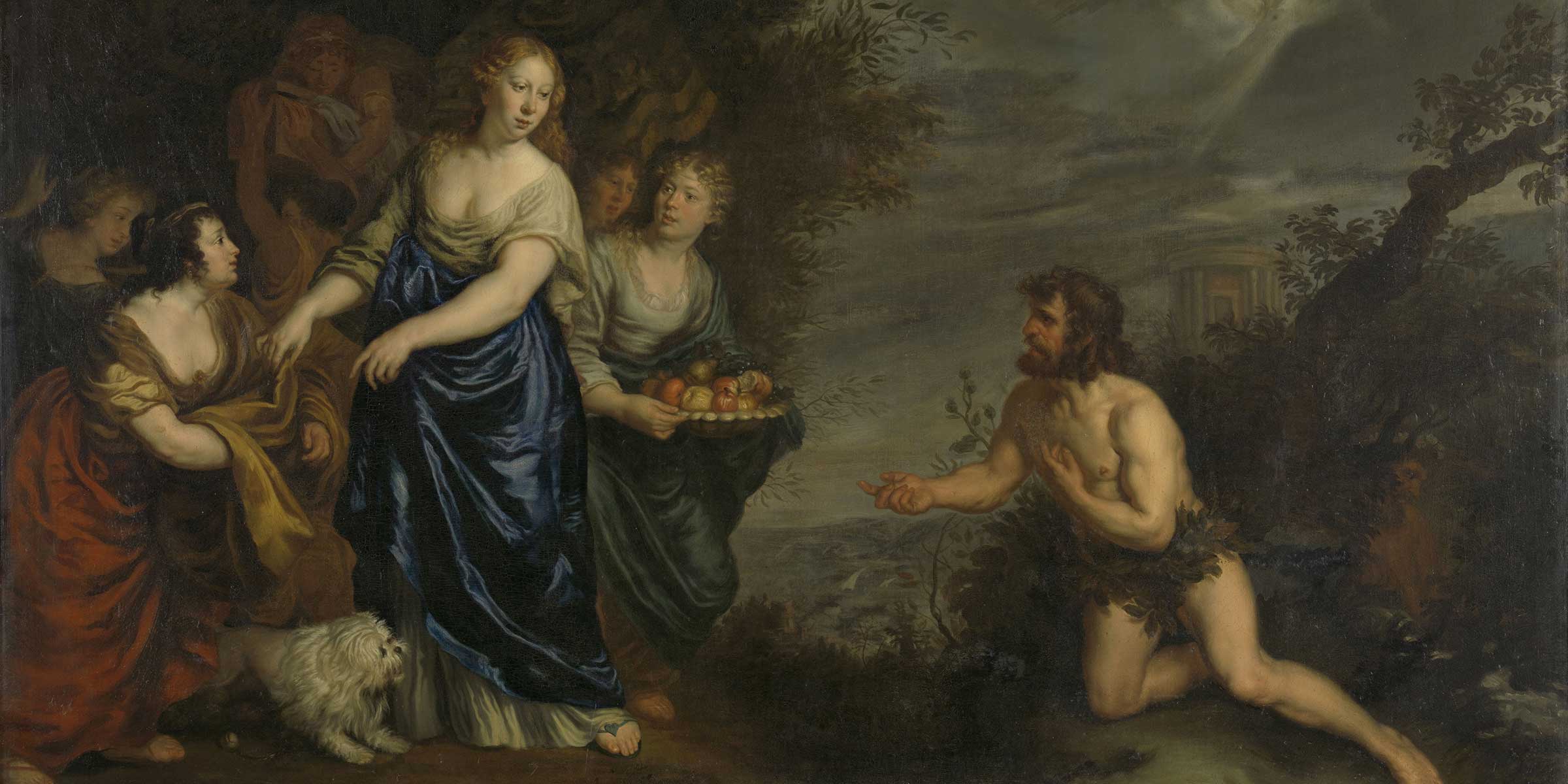 Timon: With all my heart, gentlemen both! And how fare you?

First Friend: Ever at the best, hearing well of your lordship.

Second Friend: The swallow follows not summer more willing than we your lordship.

Timon: [aside] Nor more willingly leaves winter; such summer birds are men.—Gentlemen, our dinner will not recompense this long stay. Feast your ears with the music awhile, if they will fare so harshly o’ th’ trumpets’ sound; we shall to’t presently.

First Friend: I hope it remains not unkindly with your lordship that I returned you an empty messenger.

Timon: O sir, let it not trouble you.

Second Friend: My most honorable lord, I am e’en sick of shame that when your lordship this other day sent to me, I was so unfortunate a beggar.

Second Friend: If you had sent but two hours before—

Timon: Let it not cumber your better remembrance. [Servants bring in the banquet then leave.] Come, bring in all together. 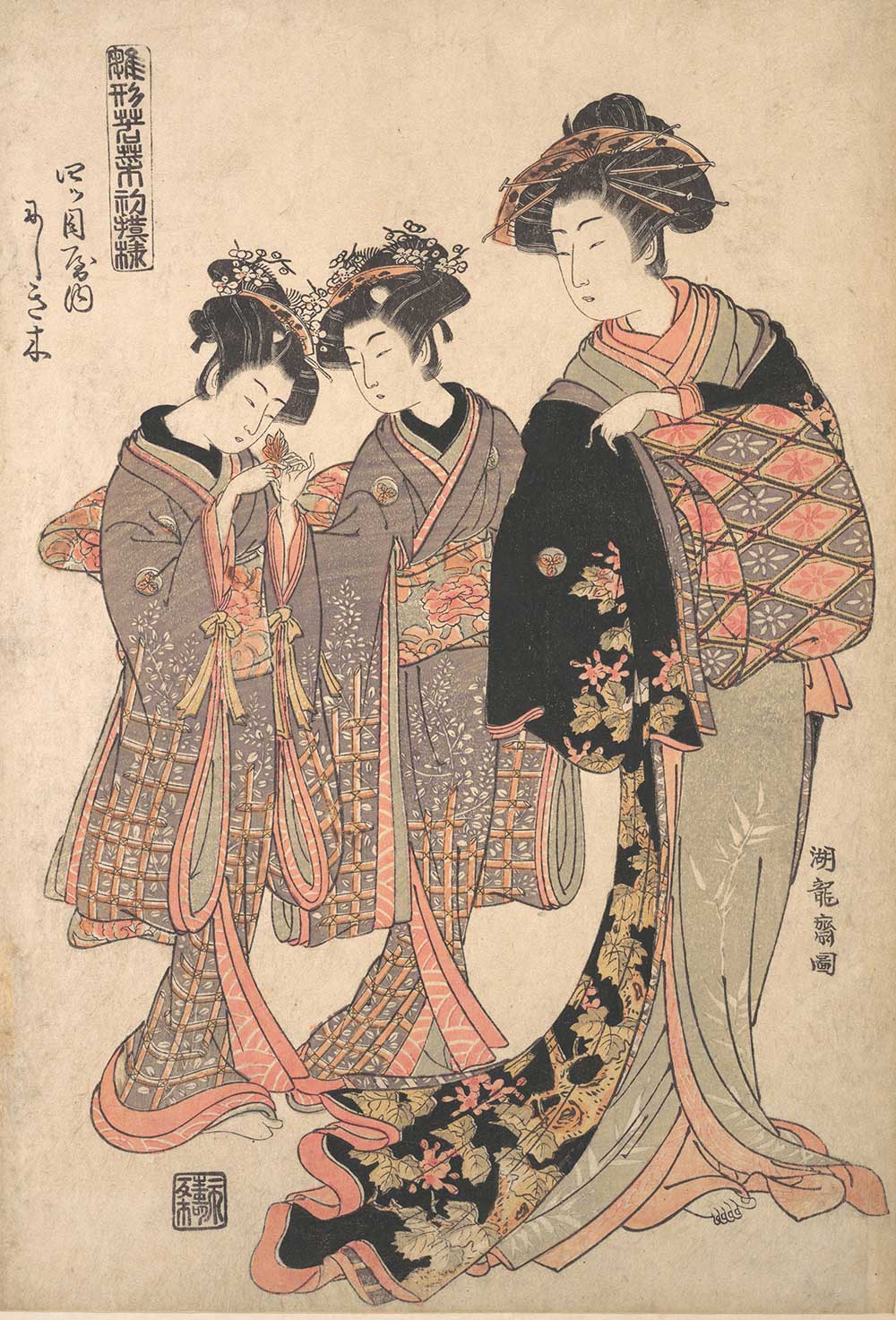 The Courtesan Nishikigi of the Yotsumeya Brothel, by Koryusai, 1776. The Metropolitan Museum of Art, Howard Mansfield Collection, Purchase, Rogers Fund, 1936.

Third Friend: Doubt not that, if money and the season can yield it.

Timon: My worthy friends, will you draw near?

Second Friend: This is the old man still.

Second Friend: It does; but time will—and so—

Third Friend: I do conceive.

Timon: Each man to his stool, with that spur as he would to the lip of his mistress. Your diet shall be in all places alike; make not a city feast of it, to let the meat cool ere we can agree upon the first place; sit, sit. The gods require our thanks.

You great benefactors, sprinkle our society with thankfulness. For your own gifts make yourselves praised; but reserve still to give, lest your deities be despised. Lend to each man enough, that one need not lend to another; for were your godheads to borrow of men, men would forsake the gods. Make the meat be beloved more than the man that gives it. Let no assembly of twenty be without a score of villains. If there sit twelve women at the table, let a dozen of them be—as they are. The rest of your fees, O gods—the senators of Athens, together with the common lag of people—what is amiss in them, you gods, make suitable for destruction. For these my present friends, as they are to me nothing, so in nothing bless them, and to nothing are they welcome.

[The dishes are uncovered and seen to be full of warm water and stones.]

Some speak: What does his lordship mean?

Some other: I know not.

Timon: May you a better feast never behold,
You knot of mouth-friends! Smoke and lukewarm water
Is your perfection. This is Timon’s last;
Who, stuck and spangled with your flatteries,
Washes it off and sprinkles in your faces
[Throws the water in their faces]
Your reeking villainy. Live loathed and long,
Most smiling, smooth, detested parasites,
Courteous destroyers, affable wolves, meek bears,
You fools of fortune, trencher-friends, time’s flies,
Cap-and-knee slaves, vapors, and minute jacks!
Of man and beast the infinite malady
Crust you quite o’er! What, dost thou go?
Soft, take thy physic first; thou too, and thou!
Stay, I will lend thee money, borrow none.
[Throws stones and drives them out]
What, all in motion? Henceforth be no feast
Whereat a villain’s not a welcome guest.
Burn house! Sink Athens! Henceforth hated be
Of Timon man and all humanity!

From Timon of Athens. The principal source for this play, written around 1604, is a brief passage in Plutarch’s biography of Mark Antony. Between the Roman general’s defeat in 31 bc at the Battle of Actium and his suicide the following year, Plutarch writes, Antony withdrew to a residence he named the Timonium, in reference to a possibly apocryphal misanthrope of classical Athens. Here Antony “declared that he was contentedly imitating the life of Timon…for he himself also had been wronged and treated with ingratitude by his friends and therefore hated and distrusted all mankind.”