Perhaps we are led oftener by the love of novelty, and a regard for the opinions of men, in procuring clothing, than by a true utility. Let him who has work to do recollect that the object of clothing is, first, to retain the vital heat, and secondly, in this state of society, to cover nakedness, and he may judge how much of any necessary or important work may be accomplished without adding to his wardrobe.

Kings and queens who wear a suit but once, though made by some tailor or dressmaker to their majesties, cannot know the comfort of wearing a suit that fits. They are no better than wooden horses to hang the clean clothes on. Every day our garments become more assimilated to ourselves, receiving the impress of the wearer’s character, until we hesitate to lay them aside, without such delay and medical appliances and some such solemnity even as our bodies. No man ever stood the lower in my estimation for having a patch in his clothes; yet I am sure that there is greater anxiety, commonly, to have fashionable, or at least clean and unpatched, clothes than to have a sound conscience. But even if the rent is not mended, perhaps the worst vice betrayed is improvidence. I sometimes try my acquaintances by such tests as this—who could wear a patch, or two extra seams only, over the knee? Most behave as if they believed that their prospects for life would be ruined if they should do it. It would be easier for them to hobble to town with a broken leg than with a broken pantaloon. Often if an accident happens to a gentleman’s legs, they can be mended; but if a similar accident happens to the legs of his pantaloons, there is no help for it; for he considers not what is truly respectable, but what is respected. It is an interesting question how far men would retain their relative rank if they were divested of their clothes. Could you, in such a case, tell surely of any company of civilized men, which belonged to the most respected class? When Ida Pfeiffer, in her adventurous travels around the world, from east to west, had got so near home as Asiatic Russia, she says that she felt the necessity of wearing other than a traveling dress, when she went to meet the authorities, for she “was now in a civilized country, where…people are judged of by their clothes.” Even in our democratic New England towns the accidental possession of wealth, and its manifestation in dress and equipage alone, obtain for the possessor almost universal respect. But they who yield such respect, numerous as they are, are so far heathen, and need to have a missionary sent to them. Besides, clothes introduced sewing, a kind of work which you may call endless; a woman’s dress, at least, is never done.

A man who has at length found something to do will not need to get a new suit to do it in; for him the old will do, that has lain dusty in the garret for an indeterminate period. Old shoes will serve a hero longer than they have served his valet—if a hero ever has a valet—bare feet are older than shoes, and he can make them do. Only they who go to soirées and legislative halls must have new coats, coats to change as often as the man changes in them. But if my jacket and trousers, my hat and shoes, are fit to worship God in, they will do; will they not? Whoever saw his old clothes—his old coat, actually worn out, resolved into its primitive elements, so that it was not a deed of charity to bestow it on some poor boy, by him perchance to be bestowed on some poorer still, or shall we say richer, who could do with less? I say, beware of all enterprises that require new clothes, and not rather a new wearer of clothes. If there is not a new man, how can the new clothes be made to fit? If you have any enterprise before you, try it in your old clothes. All men want, not something to do with, but something to do, or rather something to be. Perhaps we should never procure a new suit, however ragged or dirty the old, until we have so conducted, so enterprised or sailed in some way, that we feel like new men in the old, and that to retain it would be like keeping new wine in old bottles. Our molting season, like that of the fowls, must be a crisis in our lives. The loon retires to solitary ponds to spend it. Thus also the snake casts its slough and the caterpillar its wormy coat by an internal industry and expansion; for clothes are but our outmost cuticle and mortal coil. Otherwise we shall be found sailing under false colors, and be inevitably cashiered at last by our own opinion, as well as that of mankind. 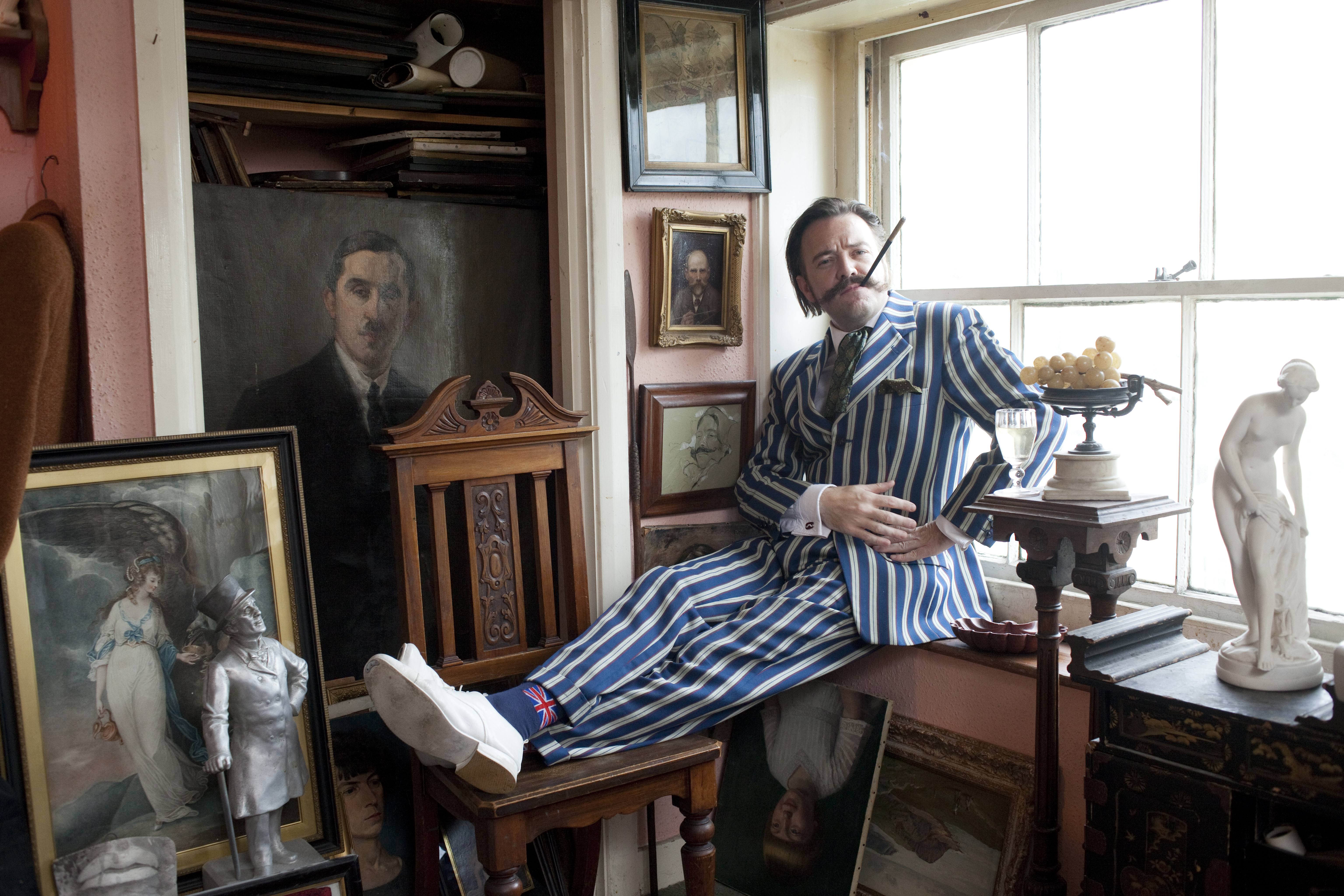 We don garment after garment, as if we grew like exogenous plants by addition without. Our outside and often thin and fanciful clothes are our epidermis or false skin, which partakes not of our life, and may be stripped off here and there without fatal injury; our thicker garments, constantly worn, are our cellular integument, or cortex; but our shirts are our true bark, which cannot be removed without girdling and so destroying the man. I believe that all races at some seasons wear something equivalent to the shirt. It is desirable that a man be clad so simply that he can lay his hands on himself in the dark, and that he live in all respects so compactly and preparedly that if an enemy take the town he can, like the old philosopher, walk out the gate empty-handed without anxiety. While one thick garment is, for most purposes, as good as three thin ones, and cheap clothing can be obtained at prices really to suit customers; while a thick coat can be bought for five dollars, which will last as many years, thick pantaloons for two dollars, cowhide boots for a dollar and a half a pair, a summer hat for a quarter of a dollar, and a winter cap for sixty-two and a half cents, or a better be made at home at a nominal cost, where is he so poor that clad in such a suit of his own earning there will not be found wise men to do him reverence?

When I ask for a garment of a particular form, my tailoress tells me gravely, “They do not make them so now,” not emphasizing the they at all, as if she quoted an authority as impersonal as the Fates, and I find it difficult to get made what I want, simply because she cannot believe that I mean what I say, that I am so rash. When I hear this oracular sentence, I am for a moment absorbed in thought, emphasizing to myself each word separately that I may come at the meaning of it, that I may find out by what degree of consan­guinity they are related to me, and what authority they may have in an affair which affects me so nearly; and, finally, I am inclined to answer her with equal mystery, and without any more emphasis of the they—“It is true, they did not make them so recently, but they do now.” Of what use this measuring of me if she does not measure my character, but only the breadth of my shoulders, as it were a peg to hang the coat on? We worship not the Graces, nor the Parcae, but Fashion. She spins and weaves and cuts with full authority. The head monkey at Paris puts on a traveler’s cap, and all the monkeys in America do the same.

On the whole, I think it cannot be maintained that dressing has in this or any country risen to the dignity of an art. At present, men make shift to wear what they can get. Like shipwrecked sailors, they put on what they can find on the beach, and at a little distance, whether of space or time, laugh at each other’s masquerade. Every generation laughs at the old fashions, but follows religiously the new. We are amused at beholding the costume of Henry VIII, or Queen Elizabeth, as much as if it was that of the king and queen of the Cannibal Islands. All costume off a man is pitiful or grotesque. It is only the serious eye peering from and the sincere life passed within it, which restrain laughter and consecrate the costume of any people. Let Harlequin be taken with a fit of colic and his trappings will have to serve that mood too. When the soldier is hit by a cannonball, rags are as becoming as purple.

As bad a dresser as I am, anything beats being judged by my character.

The childish and savage taste of men and women for new patterns keeps how many shaking and squinting through kaleidoscopes that they may discover the particular figure which this generation requires today. The manufacturers have learned that this taste is merely whimsical. Of two patterns which differ only by a few threads more or less of a particular color, the one will be sold readily, the other lie on the shelf, though it frequently happens that after the lapse of a season the latter becomes the most fashionable. Comparatively, tattooing is not the hideous custom which it is called. It is not barbarous merely because the printing is skin-deep and unalterable.

I cannot believe that our factory system is the best mode by which men may get clothing. The condition of the operatives is becoming every day more like that of the English; and it cannot be wondered at, since, as far as I have heard or observed, the principal object is not that mankind may be well and honestly clad but, unquestionably, that the corporations may be enriched. In the long run men hit only what they aim at. Therefore, though they should fail immediately, they had better aim at something high.

From Walden. In 1845, at the age of twenty-seven, Thoreau built a cabin near Walden Pond on a plot of land owned by his friend Ralph Waldo Emerson; he stayed for two years, two months, and two days. Walden was published in 1854. The following year, while living in his hometown of Concord, Massachusetts, Thoreau wrote in a letter to a friend: “The old coat that I wear is Concord—it is my morning robe and study gown, my working dress and suit of ceremony, and my nightgown after all.” His last discernible words before his death in 1862 were “moose” and “Indian.”