It was my fate to take an active—rather too active, in fact—part in the story of Mary Mallon. Typhoid Mary, who came to have no other name, to the public at least, died on November 11, 1938, at the Riverside Hospital of the Department of Health on North Brother Island. She was seventy years old and since 1907 had been virtually a prisoner of the city.

The germ of typhoid fever had been isolated in 1884, and several years later Dr. Robert Koch, a great bacteriologist, discovered during an outbreak of typhoid fever in Strass­burg, Germany, that a woman who was running a bakeshop in that town might be the source of the infection. She had had typhoid fever many years before, and tests showed that her body still gave off the germs of typhoid. In 1904 this news came to America. Dr. George A. Soper, an eminent sanitarian, determined to find the truth of this. Starting with an epidemic of typhoid fever occurring in Mamaroneck in 1900, he had been following the trend of these numerous cases. He came upon a curious sequence of outbreaks in private families in different communities. In each family he found that the same woman was the cook, leaving shortly after the outbreak occurred to go on to her next place, where, inevitably, typhoid occurred shortly afterward. She was finally located in a house on Park Avenue where several members of the family already were coming down with typhoid fever. Dr. Soper, at that time a sanitary engineer in the Department of Health, asked to have an inspector sent to get specimens from Mary. I was the inspector assigned to this seemingly simple task.

I learned afterward that Dr. Soper had reason to suspect that Mary might make trouble. But I knew nothing of that, and after all, I was just to get specimens of her blood and urine. When I first interviewed her, Mary was busy at her job in the kitchen of a prosperous Park Avenue household. It was the traditional brownstone-front house in the Sixties. Mary was a clean, neat, obviously self-respecting Irishwoman with a firm mouth and her hair done in a tight knot at the back of her head. Using as much routine tact as possible, I told her what I wanted. Her jaw set and her eyes glinted and she said, “No.” She said it in a way that left little room for persuasion or argument. Obviously, here was another case of that blind, panicky distrust of doctors and all their works which crops up so often among the uneducated—and among the educated, too, for that matter.

That night I received a telephone call from Dr. Bensel, my superior officer, telling me to be at the corner of Park Avenue and Sixty-Seventh Street the next morning at seven thirty, where I would find an ambulance and three policemen. We were to go to this house, get the blood and urine specimens, and if Mary resisted, we were to take her to the Willard Parker Hospital, by force if necessary. Of course I was there at the appointed time. Leaving the ambulance at the corner, I placed one policeman around the corner, another in front of the house, and with the remaining one, I went to the basement door. Mary was on the lookout and peered out, a long kitchen fork in her hand like a rapier. As she lunged at me with the fork, I stepped back, recoiled on the policeman, and so confused matters that by the time we got through the door, Mary had disappeared. Disappear is too matter-of-fact a word; she had completely vanished. In a three-hour search, we discovered only one clue: a chair set by the high fence between this house and the adjoining one with footprints in the snow leading to it. So, much to the bewilderment of its occupants, we searched that house, too, but still no Mary. The rest of the servants denied knowing anything about her or where she was; even in my distress, I liked that loyalty. Further search seemed useless. I went over to Third Avenue and telephoned Dr. Bensel that Mary could not be found. Dr. Bensel was laconic. “I expect you to get the specimens or to take Mary to the hospital.” And then he rang off. On my discouraged way back to the house, I commandeered two more policemen whom I found by the way. And then we started in again. For another two hours, we went through every closet and nook and cranny in those two houses. It was utter defeat. I was trying to decide how I would face Dr. Bensel when one of the policemen caught sight of a tiny scrap of blue calico caught in the door of the areaway closet under the high outside stairway leading to the front door. A dozen filled ash cans were heaped up in front of this door, another evidence of class solidarity. The ash cans were removed and the door opened and there was Mary. Once the door was opened, she wasted no time. She came out fighting and swearing, both of which she could do with appalling efficiency and vigor. I made another effort to talk to her sensibly and asked her again to let me have the specimens, but it was of no use. By that time she was convinced that the law was wantonly persecuting her, when she had done nothing wrong. She knew she had never had typhoid fever; she was maniacal in her integrity. There was nothing I could do but take her with us. The policemen lifted her into the ambulance, and I literally sat on her all the way to the hospital; it was like being in a cage with an angry lion.

The hospital laboratories speedily proved that Mary was as dangerous as Dr. Soper had suspected. Her bowel movements were a living culture of typhoid bacilli. Her blood and urine showed nothing abnormal. But as a cook, Mary could contaminate every bit of food she cooked and every dish she touched. And to me the interesting part of it all was that if Mary had let me have the specimens I was sent to get, she might have been a free woman all her life. It was her own bad behavior that inevitably led to her doom. The hospital authorities treated her as kindly as possible, but she never learned to listen to reason. When they suggested removing her gallbladder, the probable focus of infection, she was convinced afresh that this was a pretext for killing her. The only answer was to keep her in the custody of the department, out of contact with other people’s food, and she was given quarters at North Brother Island in the East River. 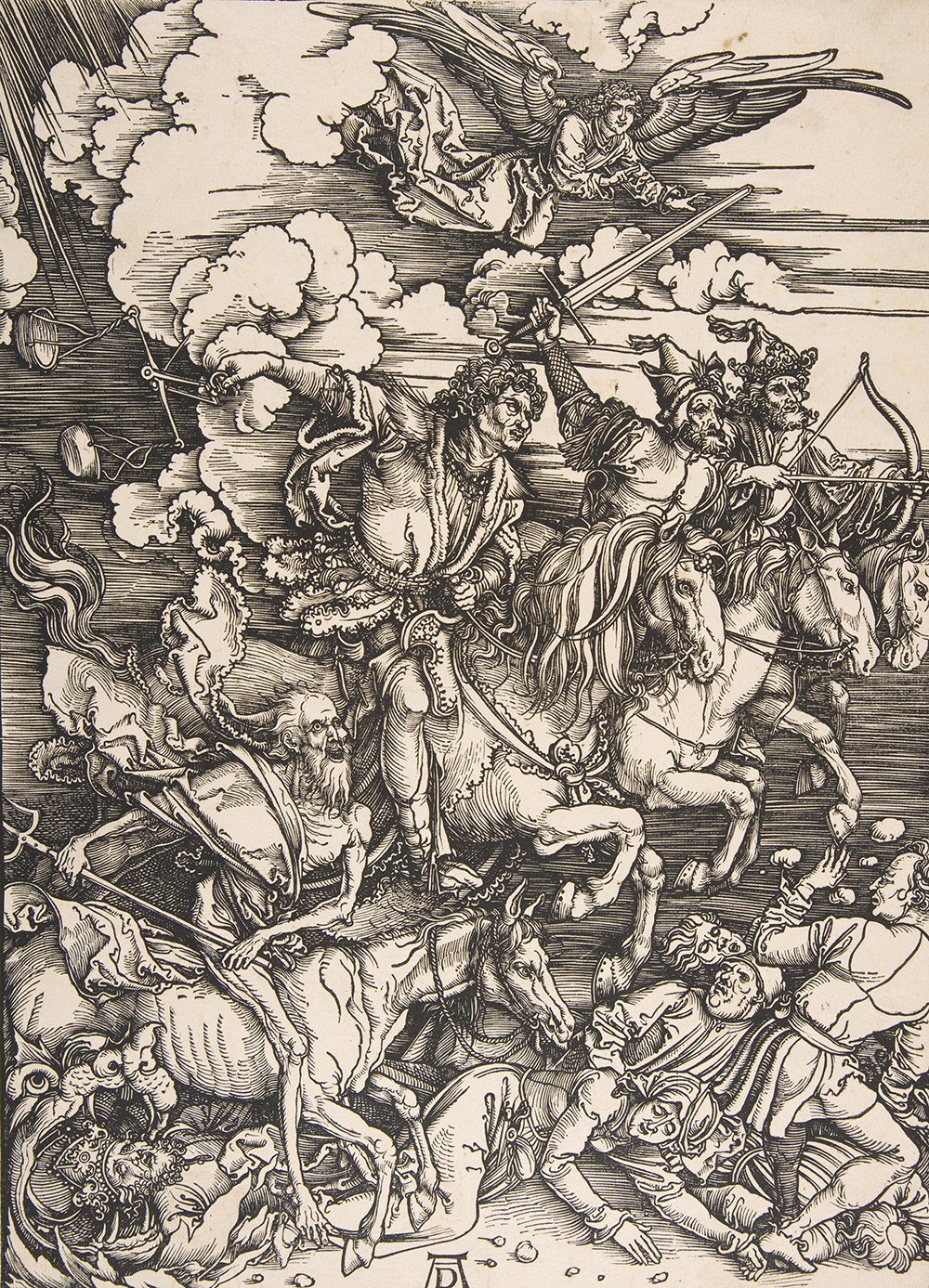 The Four Horsemen of the Apocalypse, by Albrecht Dürer, c. 1497. The Metropolitan Museum of Art, gift of Mrs. Felix M. Warburg, 1940.

For three years she stayed there and then was released on a solemn promise given to Dr. Ernst Lederle, who was then health commissioner, that she would never again take any position that involved handling food. But cooking was, after all, her trade, and she was constitutionally incapable of believing all this mystery about germs. So she went back to it, with the inevitable consequences. When typhoid broke out suddenly in a New Jersey sanitarium, it developed that Mary had been working there and had then run away when the disease developed. A short time later, typhoid appeared in the Sloane Maternity Hospital in New York City, with two deaths out of twenty-five cases. Although I was no longer a roving inspector, I went up there one day and walked into the kitchen. Sure enough, there was Mary earning her living in the hospital kitchen and spreading typhoid germs among mothers and babies and doctors and nurses like a destroying angel.

This time she had to go back under a life sentence, to North Brother Island. Until the other day, she was still there and she still had her gallbladder. She had threatened to kill me if she could get out, and during the years she was at large, that little doubt would stay in the back of my mind. But I could not blame her for feeling that way. From my brief acquaintance with Mary, I learned to like her and to respect her point of view. After all, she has been of great service to humanity. There have been many typhoid carriers recognized since her time, but she was the first charted case, and for that distinction she paid in a lifelong imprisonment. Today, typhoid carriers are usually allowed their freedom, after they have pledged themselves not to handle other people’s food. And so far as we have been able to discover, they have kept their word. It was Mary’s tragedy that she could not trust us.

Typhoid Mary made me realize for the first time what sweeping powers are vested in public health authorities. There is very little that a board of health cannot do in the way of interfering with personal and property rights for the protection of the public health. Boards of health have judicial, legislative, and executive powers. They are the only public agencies that combine all of these powers. It all dates back to a bad cholera epidemic in New York almost one hundred years ago, when cholera and yellow fever were still potential menaces along the Atlantic seaboard. This outbreak was so serious that a petition was sent to the state legislature asking that emergency police measures be created for proper protection against this invasion. A board of health was created, and in order that it might be fully effective in any emergency, the legislature granted it extraordinary powers to use as it saw fit. These laws still persist. Today practically all boards of health have the same wide powers, but it is to our credit that they have used them wisely.

From Fighting for Life. After graduating from the Woman’s Medical College of the New York Infirmary, Baker went into private practice. Finding that many of her patients were too impoverished to pay, however, in 1902 she became a health inspector for the New York City Department of Health. Later, as founding director of the Bureau of Child Hygiene, she established a program in which nurses visited new mothers in the city’s poorest neighborhoods. The nurses encouraged breast-feeding and discouraged giving babies beer, then a common practice. Within three years infant mortality in the city fell by 40 percent.

Asking for a Friend