If you propose to educate the Negro into the possibility of full citizenship in the modern world of culture, one thing you have got to admit at the very outset, and that is he cannot, to any appreciable extent, get that education from the white people about him.

Now, this is true on the whole of no other constituent part of the American people. If higher college training is asked for poor American boys, for Armenians, or for white mountaineers, it is sufficiently just to say there is at present a more crying need for certain forms of elementary training among these boys than for college training. Their guidance and training in the higher matters of social evolution can be safely left to the result of their contact with the best of their fellow citizens. But with the Negro, this is not true. By the silent decree of the nation he is, in the South, shut off and isolated. And much of this program is being easily accepted in the North.

What the Negro needs, therefore, of the world and civilization, he must largely teach himself; what he learns of social organization and efficiency, he must learn from his own people. His conceptions of social uplift and philanthropy must come from within his own ranks, and he must above all make and set and follow his own ideals of life and character. Now, this is putting upon a people just emerged from slavery, with neither time, traditions, nor experience, a tremendous task. In strict justice, it is asking more of this people than the American nation has any right to ask. Nevertheless, this race is not stopping to await justice in this matter; it is not asking about the righteousness of past conduct; it is not even pausing—as perhaps it ought—to discuss the advisability of present policies; but it is asking you, here and now, to place in its hands the indispensable facilities for teaching itself those things that it must know if it is going to share modern civilization.

Moreover, just as in justice you cannot ask a man to raise himself by his own bootstraps, just so you cannot logically and justly expect that a people will furnish itself, under such circumstances, with its own chief means of uplift. The natural temptation for a group in our situation is to look around them upon their neighbors, pick out that which in their inexperience seems to be the cause of success, and advancing and seizing it lightly, try to march on. If the thing that they choose is momentarily popular, they will receive for choosing it exaggerated applause; just as they were applauded in 1868 for political acumen because politics were popular, just so today they are applauded for showing signs of industrial shrewdness, because industry is the ruling movement today. Now, both politics and industry are the leading and main foundations of every successful state, but the great point is that for any people to be successfully civilized they must know how to handle those great tools of advance, and they can learn this only from a knowledge of the world’s experience through the teaching of a cultured class.

Reading is learning, but applying is also learning and the more important kind of learning at that.

The community must be able to take hold of its individuals and give them such a social heritage, such present social teachings, and such compelling social customs as will force them along the lines of progress, and not into the great forests of death. What is needed then for any group of advancing people is the college-bred community; for no matter how far the college may fail in individual cases, it is after all the center where knowledge of the past connects with the ideal of the future. Every community, therefore, must be college-bred; and that does not mean that every individual must be a college graduate; it may be that the proportion of college-­bred men may be small, even infinitesimal; and still the community, by tradition and heritage, will hold fast to what the past has taught the world of high and ideal future accomplishment. But given a group or community that does not know the message of the past and does not have within its own number the men who can feel it and is separated from contact with outside groups who can teach it—given such a community, you have a desperate situation that calls for immediate remedy. It is such a situation among the Negroes in the South that calls for schools like Atlanta University.

There ought to be in the South today at least five institutions with an endowment of a million dollars each whose business it would be to furnish the teachers and professional men and thinkers and industrial leaders for the masses of the black people of the South. Such colleges would represent not the capstone of the social organization of the South but rather its vast foundation. As a matter of fact, such institutions today, tremendously hampered as they are in their work, have nevertheless begun this work of giving communities college training and have so far done remarkably well. To them is due the establishment of the Negro school system in the South with 21,000 teachers; the establishment and conduct of the great and efficient industrial schools; the development and guidance to a considerable extent of the 35,000 Negro churches and the accumulation personally and through their influence of the more than $650 million of Negro wealth. It would, of course, be wrong to say that Negro colleges were responsible for every step that the black man has taken in advance since the war; but it is not too much to say that but for the black men trained in the colleges North and South, and the students who were in turn trained by them, the major part of this progress would have been utterly impossible. Moreover, it is not simply in education that the Negro college accomplishes its mission of human culture. Nearly all the adjuncts by which culture is diffused in the North have been absent among Negroes in the South: the public lecture and public library; the sympathetic newspaper, organized charity, and social settlements; the Young Men’s Christian Association and women’s clubs, etc. Today all these instruments of culture are making their appearance slowly but surely, and they are coming directly from the Negro colleges and from centers of influence where the graduates of such colleges are working. The college-bred community, therefore, in the South is already beginning to be a reality, but it needs tremendous reinforcement and continual impulse.

From “The College-Bred Community.” Du Bois studied under William James and George Santayana at Harvard and began teaching sociology and economics at Atlanta University in 1898. A few years later he helped establish the National Association for the Advancement of Colored People. He ultimately separated from the organization, and his growing interest in communism led to the U.S. government confiscating his passport for several years. In 1961 Du Bois moved to Ghana to work on an Encyclopedia Africana; while living there, he became a Ghanaian citizen. 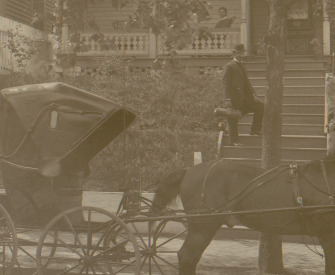 W.E.B. Du Bois on the beauty of sorrow songs.More