Employed for much of his life as a naval administrator, Samuel Pepys is best remembered for his Diary. His accounts of such events as the Restoration in 1660, the plague of 1665, and the Great Fire of London in 1666 are seen as definitive descriptions of seventeenth-century London. 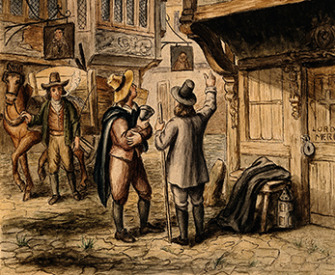 Blogging the Great Plague of 1665. More

We are to go to law never to revenge, but only to repair.

“Secretary Morrice did this day in the House, when they talked of intelligence, say that he was allowed but £700 a year,” wrote Samuel Pepys in his diary in 1668, “whereas, in Cromwell’s time, he did allow £70,000 a year for it; and was confirmed therein by Colonel Birch, who said that thereby Cromwell carried the secrets of all the princes of Europe at his girdle.”

Samuel Pepys gives an eyewitness account of the Great Fire of London.More

In 1662 diarist Samuel Pepys saw two plays by William Shakespeare performed in London. Of Romeo and Juliet he wrote, “It is a play of itself the worst that ever I heard in my life, and the worst acted that ever I saw these people do.” A Midsummer Night’s Dream he described simply as “the most insipid, ridiculous play that I ever saw in my life.”