One of my chief objects in coming to stay at Simunjon was to see the orangutan (or great manlike ape of Borneo) in his native haunts, to study his habits, and obtain good specimens of the different varieties and species of both sexes, and of the adult and young animals. In all these objects I succeeded beyond my expectations and will now give some account of my experience in hunting the orangutan, or mias, as it is called by the natives; and as this name is short and easily pronounced, I shall generally use it in preference to Simia satyrus, or orangutan.

On May 12 I found a mias, howling and hooting with rage and throwing down branches. I shot at it five times, and it remained dead on the top of the tree, supported in a fork in such a manner that it would evidently not fall. I therefore returned home and luckily found some Dayak tribesmen, who came back with me and climbed up the tree for the animal. This was the first full-grown specimen I had obtained.

Only four days afterward, some Dayak saw another mias near the same place and came to tell me. We found it to be a rather large one, very high up on a tall tree. At the second shot it fell rolling over, but almost immediately got up again and began to climb. At a third shot it fell dead. This was also a full-grown female, and while preparing to carry it home, we found a young one face downward in the bog. This little creature was only about a foot long and had evidently been hanging to its mother when she first fell. Luckily it did not appear to have been wounded, and after we had cleaned the mud out of its mouth, it began to cry out and seemed quite strong and active. While carrying it home it got its hands in my beard and grasped so tightly that I had great difficulty in getting free, for the fingers are habitually bent inward at the last joint so as to form complete hooks. At this time it had not a single tooth, but a few days afterward it cut its two lower front teeth. Unfortunately, I had no milk to give it, as neither Malay, Chinese, nor Dayak ever use the article, and I in vain inquired for any female animal that could suckle my little infant. I was therefore obliged to give it rice water from a bottle with a quill in the cork, which after a few trials it learned to suck very well. This was very meager diet, and the little creature did not thrive well on it, although I added sugar and coconut milk occasionally to make it more nourishing. When I put my finger in its mouth, it sucked with great vigor, drawing in its cheeks with all its might in the vain effort to extract some milk, and only after persevering a long time would it give up in disgust and set up a scream very like that of a baby in similar circumstances. 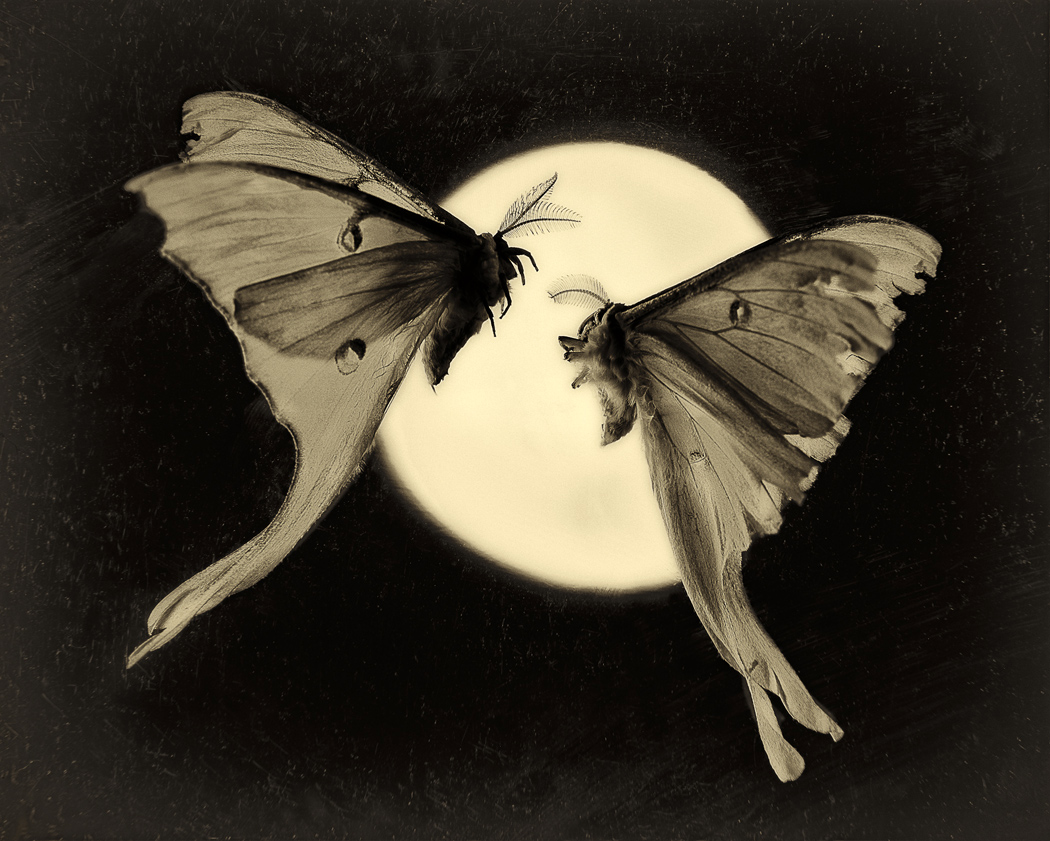 “Luna & Luna no. 2,” from Lepidoptera Portraits, 2007. Photograph by Harri Kallio. © Harri Kallio, courtesy of the artist.

When handled or nursed, it was very quiet and contented, but when laid down by itself would invariably cry, and for the first few nights it was very restless and noisy. I fitted up a little box for a cradle, with a soft mat for it to lie upon, which was changed and washed every day, and I soon found it necessary to wash the little mias as well. After I had done so a few times, it came to like the operation, and as soon as it was dirty would begin crying and not leave off till I took it out and carried it to the spout, when it immediately became quiet, although it would wince a little at the first rush of the cold water and make ridiculously wry faces while the stream was running over its head. It enjoyed the wiping and rubbing dry amazingly, and when I brushed its hair seemed to be perfectly happy, lying quite still with its arms and legs stretched out while I thoroughly brushed the long hair of its back and arms. For the first few days it clung desperately with all four hands to whatever it could lay hold of, and I had to be careful to keep my beard out of its way, as its fingers clutched hold of hair more tenaciously than anything else, and it was impossible to free myself without assistance. When restless, it would struggle about with its hands up in the air trying to find something to take hold of, and when it had got a bit of stick or rag in two or three of its hands, it seemed quite happy. For want of something else, it would often seize its own feet, and after a time it would constantly cross its arms and grasp with each hand the long hair that grew just below the opposite shoulder. The great tenacity of its grasp soon diminished, and I was obliged to invent some means to give it exercise and strengthen its limbs. For this purpose I made a short ladder of three or four rounds, on which I put it to hang for a quarter of an hour at a time. At first it seemed much pleased, but it could not get all four hands in a comfortable position and, after changing about several times, would leave hold of one hand after the other and drop on to the floor. Sometimes when hanging only by two hands, it would loose one and cross it to the opposite shoulder, grasping its own hair, and as this seemed much more agreeable than the stick, it would then loose the other and tumble down, when it would cross both and lie on its back quite contentedly, never seeming to be hurt by its numerous tumbles. Finding it so fond of hair, I endeavored to make an artificial mother by wrapping up a piece of buffalo skin into a bundle and suspending it about a foot from the floor. At first this seemed to suit it admirably, as it could sprawl its legs about and always find some hair, which it grasped with the greatest tenacity. I was now in hopes that I had made the little orphan quite happy, and so it seemed for some time, till it began to remember its lost parent and try to suck. It would pull itself up close to the skin and try about everywhere for a likely place, but as it only succeeded in getting mouthfuls of hair and wool, it would be greatly disgusted and scream violently and, after two or three attempts, let go altogether. One day it got some wool into its throat, and I thought it would have choked, but after much gasping it recovered, and I was obliged to take the imitation mother to pieces again and give up this last attempt to exercise the little creature.

After the first week I found I could feed it better with a spoon, and give it a little more varied and more solid food. Well-soaked biscuit mixed with a little egg and sugar, and sometimes sweet potatoes, were readily eaten, and it was a never-failing amusement to observe the curious changes of countenance by which it would express its approval or dislike of what was given to it. The poor little thing would lick its lips, draw in its cheeks, and turn up its eyes with an expression of the most supreme satisfaction when it had a mouthful particularly to its taste. On the other hand, when its food was not sufficiently sweet or palatable, it would turn the mouthful about with its tongue for a moment as if trying to extract what flavor there was, and then push it all out between its lips. If the same food was continued, it would set up a scream and kick about violently, exactly like a baby in a passion.

Weaseling out of things is important to learn. It’s what separates us from the animals—except the weasel.

When I had had it about a month, it began to exhibit some signs of learning to run alone. When laid upon the floor it would push itself along by its legs, or roll itself over, and thus make an unwieldy progression. When lying in the box it would lift itself up to the edge into almost an erect position, and once or twice succeeded in tumbling out. When left dirty or hungry or otherwise neglected, it would scream violently till attended to, varied by a kind of coughing or pumping noise, very similar to that which is made by the adult animal. If no one was in the house, or its cries were not attended to, it would be quiet after a little while, but the moment it heard a footstep would begin again harder than ever.

After five weeks it cut its two upper front teeth, but in all this time it had not grown the least bit, remaining both in size and weight the same as when I first procured it. This was no doubt owing to the want of milk or other equally nourishing food. Rice water, rice, and biscuits were but a poor substitute, and the expressed milk of the coconut which I sometimes gave it did not quite agree with its stomach. To this I imputed an attack of diarrhea from which the poor little creature suffered greatly, but a small dose of castor oil operated well, and cured it. A week or two afterward it was again taken ill, and this time more seriously. The symptoms were exactly those of intermittent fever, accompanied by watery swellings on the feet and head. It lost all appetite for its food and, after lingering for a week a most pitiable object, died, after being in my possession nearly three months. I much regretted the loss of my little pet, which I had at one time looked forward to bringing up to years of maturity and taking home to England. For several months it had afforded me daily amusement by its curious ways and the inimitably ludicrous expression of its little countenance. I preserved its skin and skeleton, and in doing so found that when it fell from the tree it must have broken an arm and a leg, which had, however, united so rapidly that I had only noticed the hard swellings on the limbs where the irregular junction of the bones had taken place.

From The Malay Archipelago. After establishing himself as a naturalist, Wallace at the age of thirty-one in 1854 arrived at the Malay Archipelago, where he collected some 126,500 specimens—including over two hundred new species of birds—and began to formulate his theory of natural selection. After recovering from a bout of malaria in 1858, he sent the essay “On the Tendency of Varieties to Depart Indefinitely from the Original Type” to Charles Darwin; it was presented along with two papers by Darwin to the Linnean Society later that year.

A prank-war between a nobleman and the court fool escalates out of control. More