Ivan Dmitritch, a middle class man who lived with his family on an income of twelve hundred a year and was very well satisfied with his lot, sat down on the sofa after supper and began reading the newspaper.

“I forgot to look at the newspaper today,” his wife said to him as she cleared the table. “Look and see whether the list of drawings is there.”

“Yes, it is,” said Ivan Dmitritch, “but hasn’t your ticket lapsed?”

“No, I took the interest on Tuesday.”

“What is the number?”

Ivan Dmitritch had no faith in lottery luck and would not, as a rule, have consented to look at the lists of winning numbers; but now, as he had nothing else to do and as the newspaper was before his eyes, he passed his finger downwards along the column of numbers. And immediately, as though in mockery of his skepticism, no further than the second line from the top, his eye was caught by the figure 9,499! Unable to believe his eyes, he hurriedly dropped the paper on his knees without looking to see the number of the ticket, and, just as though someone had given him a douche of cold water, he felt an agreeable chill in the pit of the stomach, tingling and terrible and sweet!

His wife looked at his astonished and panic-stricken face and realized that he was not joking.

“9,499?” she asked, turning pale and dropping the folded tablecloth on the table.

“And the number of the ticket?” 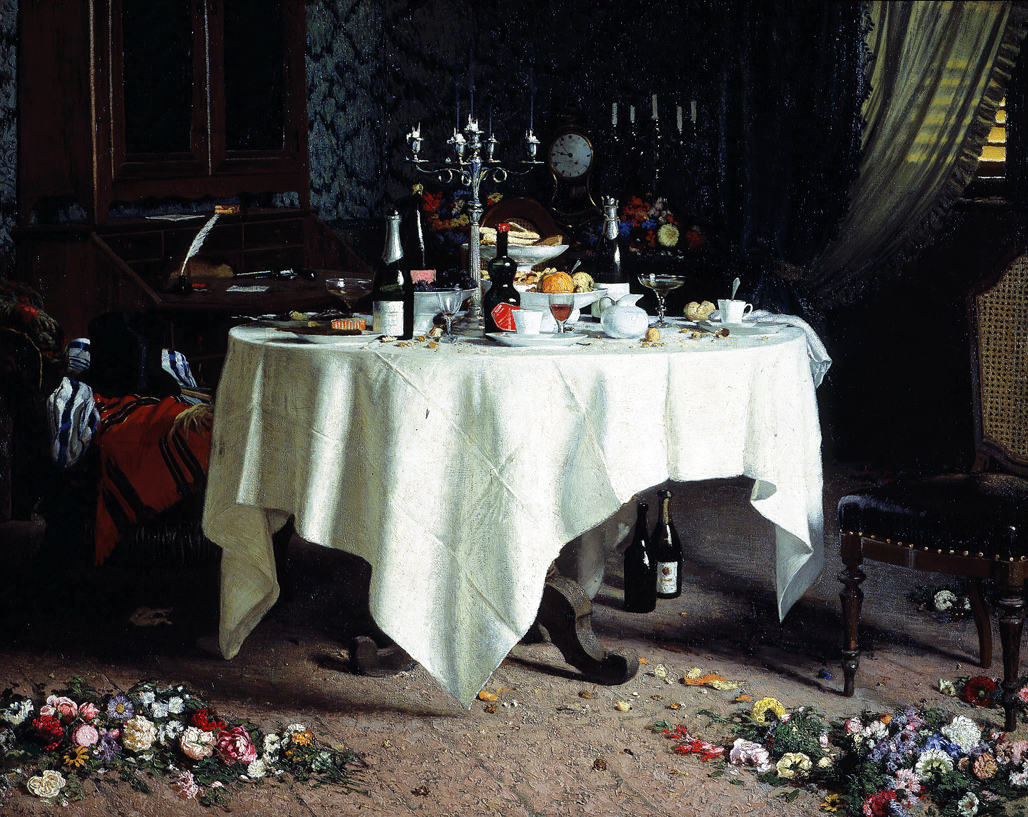 Looking at his wife, Ivan Dmitritch gave a broad, senseless smile, like a baby when a bright object is shown it. His wife smiled too; it was as pleasant to her as to him that he only mentioned the series and did not try to find out the number of the winning ticket. To torment and tantalize oneself with hopes of possible fortune is so sweet, so thrilling!

“It is our series,” said Ivan Dmitritch, after a long silence. “So there is a probability that we have won. It’s only a probability, but there it is!”

Ivan Dmitritch, holding the paper in his hand, walked several times from corner to corner, and only when he had recovered from the first impression, began dreaming a little.

“And if we have won,” he said, “why, it will be a new life; it will be a transformation! The ticket is yours, but if it were mine, I should, first of all, of course, spend twenty-five thousand on real property in the shape of an estate; ten thousand on immediate expenses, new furnishing… traveling… paying debts, and so on…. The other forty thousand I would put in the bank and get interest on it.”

“Yes, an estate, that would be nice,” said his wife, sitting down and dropping her hands in her lap.

“Somewhere in the Tula or Oryol provinces…. In the first place, we shouldn’t need a summer villa, and besides, it would always bring in an income.”

And pictures came crowding on his imagination, each more gracious and poetical than the last. And in all these pictures he saw himself well-fed, serene, healthy, felt warm, even hot! Here, after eating a summer soup, cold as ice, he lay on his back on the burning sand close to a stream or in the garden under a lime tree…. It is hot…. His little boy and girl are crawling about near him, digging in the sand or catching ladybirds in the grass. He dozes sweetly, thinking of nothing and feeling all over that he need not go to the office today, tomorrow, or the day after. Or, tired of lying still, he goes to the hayfield, or to the forest for mushrooms, or watches the peasants catching fish with a net. When the sun sets, he takes a towel and soap and saunters to the bathing shed, where he undresses at his leisure, slowly rubs his bare chest with his hands, and goes into the water. And in the water, near the opaque soapy circles, little fish flit to and fro and green water weeds nod their heads. After bathing there is tea with cream and milk rolls…. In the evening a walk or vint with the neighbors.

“Yes, it would be nice to buy an estate,” said his wife, also dreaming, and from her face it was evident that she was enchanted by her thoughts.

“I should go abroad, you know, Masha,” he said.

And he began thinking how nice it would be in late autumn to go abroad somewhere to the South of France… to Italy…. to India!

“I should certainly go abroad too,” his wife said. “But look at the number of the ticket!”

Nobody works as hard for his money as the man who marries it.

He walked about the room and went on thinking. It occurred to him: what if his wife really did go abroad? It is pleasant to travel alone, or in the society of light, careless women who live in the present, and not such as think and talk all the journey about nothing but their children, sigh, and tremble with dismay over eve­ry farthing. Ivan Dmitritch imagined his wife in the train with a multitude of parcels, baskets, and bags; she would be sighing over something, complaining that the train made her head ache, that she had spent so much money…. At the stations he would continually be having to run for boiling water, bread and butter…. She wouldn’t have dinner because of its being too dear….

“She would begrudge me every farthing,” he thought, with a glance at his wife. “The lottery ticket is hers, not mine! Besides, what is the use of her going abroad? What does she want there? She would shut herself up in the hotel and not let me out of her sight…. I know!”

And for the first time in his life, his mind dwelt on the fact that his wife had grown elderly and plain, and that she was saturated through and through with the smell of cooking, while he was still young, fresh, and healthy, and might well have got married again.

“Of course, all that is silly nonsense,” he thought, “but… why should she go abroad? What would she make of it? And yet she would go, of course…. I can fancy… In reality, it is all one to her, whether it is Naples or Klin. She would only be in my way. I should be depend­ent upon her. I can fancy how, like a regular woman, she will lock the money up as soon as she gets it…. She will hide it from me…. She will look after her relations and grudge me every farthing.”

Ivan Dmitritch thought of her relations. All those wretched brothers and sisters and aunts and uncles would come crawling about as soon as they heard of the winning ticket, would begin whining like beggars and fawning upon them with oily, hypocritical smiles. Wretched, detestable people! If they were given anything, they would ask for more, while if they were refused, they would swear at them, slander them, and wish them every kind of misfortune.

Ivan Dmitritch remembered his own relations and their faces, at which he had looked impartially in the past, struck him now as repulsive and hateful.

“They are such reptiles!” he thought.

And his wife’s face, too, struck him as repulsive and hateful. Anger surged up in his heart against her, and he thought malignantly:

“She knows nothing about money, and so she is stingy. If she won it, she would give me a hundred rubles and put the rest away under lock and key.”

And he looked at his wife, not with a smile now, but with hatred. She glanced at him too, and also with hatred and anger. She had her own daydreams, her own plans, her own reflections; she understood perfectly well what her husband’s dreams were. She knew who would be the first to try to grab her winnings.

“It’s very nice making daydreams at other people’s expense!” is what her eyes expressed. “No, don’t you dare!”

Her husband understood her look; hatred began stirring again in his breast, and in order to annoy his wife, he glanced quickly to spite her at the fourth page on the newspaper and read out triumphantly:

Hatred and hope both disappeared at once, and it began immediately to seem to Ivan Dmitritch and his wife that their rooms were dark and small and low-pitched, that the supper they had been eating was not doing them good, but lying heavy on their stomachs, that the evenings were long and wearisome…

From “The Lottery Ticket.” The son of a former serf, Chekhov began his literary career in Moscow during the 1880s, writing humorous magazine pieces to support his family while also studying to become a doctor. He put his medical training to use during the famine of 1891 and 1892 that killed 700,000 Russians, most of them poor farmers. Five years later, Chekhov published his collection of character sketches, Peasants.

Benvenuto Cellini gets what he wants. More