My eldest son, Kirill, was expelled from Moscow State University in 1983. In a flare of youthful maximalism, he had announced to his English instructor that she possessed no knowledge of her subject, which happened to be entirely true.

Now, imagine if someone had told me I didn’t know how to speak Russian—I’d simply laugh. But insecure people don’t forgive such statements. The English instructor happened to be good friends with the provost and the matter was settled swiftly—my son was expelled. To provide for his family, wife and little daughter, he took work as a janitor and orderly at a hospital. According to Soviet law, as he no longer studied in any college, he was going to be drafted.

I was summoned to the local draft board. I produced Kirill’s medical history, which listed asthma and chronic pneumonia. In principle, that diagnosis freed him from the draft. But the chief recruiting officer laughed in my face: They had hospitals in the army, he informed me, where my son’s illnesses would be successfully treated. He was lying, of course. A cure for asthma didn’t exist. Years later Kirill’s daughter, Masha, died of asthma at the age of eighteen.

At the time the Soviet Union was engaged in a war with Afghanistan. We all had heard rumors that the newest recruits, young boys without any experience, were immediately sent to the front line as cannon fodder, while experienced soldiers, already known to their superiors, were kept behind, protected. In addition, my son was very nearsighted and terrible at any fighting. 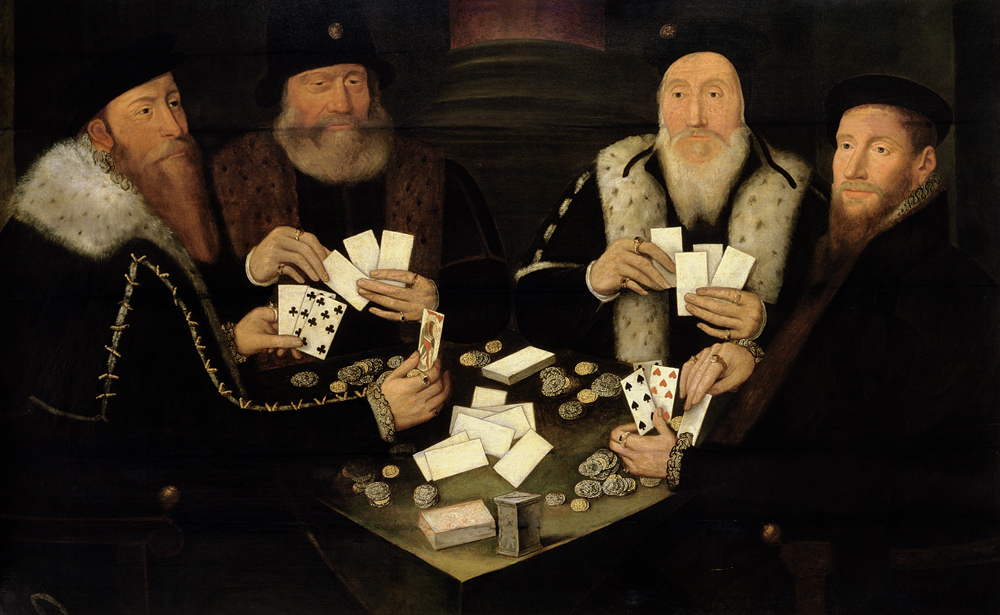 Four Gentlemen of High Rank Playing Primero, by the Master of the Countess of Warwick, c. 1568. The painting is thought to depict Francis Walsingham, William Cecil, Henry Carey, and Walter Raleigh. © The Right Hon. Earl of Derby / Bridgeman Images.

Hiding from the army, my son and his family rented a temporary residence. I began to receive visits from patrolmen who would spend nights in my kitchen, waiting for Kirill to show up.

I asked for help—at the theaters, where else? I’m a playwright. I knew that prominent theater directors managed to save their young actors from the draft through their connections among recruiting boards.

None of them were interested in helping me. I had a dreadful reputation as a forbidden author, an anti-Soviet author. My plays were regularly shut down, even though theaters fought for them with intermittent success and a one-act play, Love, was running in seven different theaters. I knocked on office doors, begged, cried. During that time Kirill’s wife became pregnant with a second child. By Soviet law, a father of two children couldn’t be drafted. But Kirill was still tracked down by the draft board (probably through his phone) and was handed a summons to be at the recruitment office the next day at seven in the morning.

Around that time the Moscow theater Lenkom had accepted my new play, Moscow Choir, on a sensitive subject: the return of political exiles who had been sent to the gulag by Stalin in 1937. Lenkom’s chief director, who had seen nothing but trouble from associating with me—my previous play, Three Girls in Blue, was shut down for four years and the theater was regularly inspected by the authorities—refused to help my son.

Moreover, no one from Lenkom’s higher management showed up for the read-through of the new play. Instead, it was attended by unfamiliar young men of nontheatrical appearance, with crew cuts. I asked who they were and was told that they had come on an unrelated matter, to discuss stage designs. I got up and left, taking with me my play.

(I suspected I was followed by the KGB and that my phone was bugged. That suspicion was confirmed years later, when the KGB’s archives were opened and the papers published lists of those under physical and phone surveillance. My name was on both lists.)

I set out on my final quest. The next day my son was to be taken from us; he was to be sent to the slaughter. I went to our country’s leading theater, the Moscow Art Theater, to seek an audience with its chief director, Oleg Yefremov. By an incredible stroke of luck, he was in his office and agreed to see me. A star of screen and theater, Yefremov was always traveling—shooting or rehearsing.

I told him everything. I didn’t cry. He heard me out, then picked up the receiver, dialed a number, and began a conversation with “It’s me—again.” He listed my son’s illnesses and complications, that Kirill’s wife was in her third month of pregnancy with a second child. He ended the conversation with “Got it. Take care.” Then he told me this: “Let him get a doctor’s note saying that his wife can’t have an abortion for medical reasons.”

I couldn’t believe my ears. I was in the presence of a man who immediately, without preamble, set out to protect me and my son. My gratitude was beyond expression.

Suddenly I remembered a famous note the actress Ingrid Bergman had given to the film director Ingmar Bergman, who couldn’t find a suitable part for her in any of his films. Her note said, “Time marches on.” I said to Yefremov, “Time marches on, you know.”

He understood at once. He was aware that I had removed my latest play from the Lenkom—all theater people know what’s happening in other theaters. He asked, “So where’s the play? Give it to me.”

A year later he premiered Moscow Choir on the Moscow Art Theater’s ninetieth birthday. They did away with the usual toasts, violin performances, and legendary actors surrounded by a younger generation. They simply showed the general rehearsal of Moscow Choir.

It continued to run for nine years.

My son visited the theater when the casket with Yefremov’s body rested on the main stage and all of Moscow passed by it, saying goodbye to the great actor and director. Kirill, whose life Yefremov had saved, stood in the wings praying.

Every time we go to the cemetery to visit my great-grandfather, a revolutionary who was murdered by the state police, we pause at Yefremov’s grave. Our savior. Director of my forbidden plays. Oleg Yefremov.

Translated from the Russian by Anna Summers.

Ludmilla Petrushevskaya was awarded the Pushkin Prize in Russian literature. Her most recent work of fiction is There Once Lived a Mother Who Loved Her Children, Until They Moved Back In.

Shakespeare on the relationship between peace and gardens.More