The objects of this primary education determine its character and limits. These objects would be:

To give to every citizen the information he needs for the transaction of his own business.

To enable him to calculate for himself, and to express and preserve his ideas, his contracts, and accounts in writing.

To improve, by reading, his morals and faculties.

To understand his duties to his neighbors and country, and to discharge with competence the functions confided to him by either.

To know his rights; to exercise with order and justice those he retains; to choose with discretion the fiduciary of those he delegates; and to notice their conduct with diligence, with candor, and judgment.

And, in general, to observe with intelligence and faithfulness all the social relations under which he shall be placed.

To instruct the mass of our citizens in their rights, interests, and duties, as men and citizens, being then the objects of education in the primary schools, whether private or public. In them should be taught reading, writing, numerical arithmetic, the elements of mensuration (useful in so many callings), and the outlines of geography and history. And this brings us to the point at which are to commence the higher branches of education, of which the Legislature requires the development; those, for example, which are:

To form the statesmen, legislators, and judges, on whom public prosperity and individual happiness are so much to depend.

To expound the principles and structure of government—the laws which regulate the intercourse of nations, those formed municipally for our own government—and a sound spirit of legislation, which, banishing all arbitrary and unnecessary restraint on individual action, shall leave us free to do whatever does not violate the equal rights of another.

To harmonize and promote the interests of agriculture, manufactures, and commerce, and by well-informed views of political economy to give a free scope to the public industry.

To develop the reasoning faculties of our youth, enlarge their minds, cultivate their morals, and instill into them the precepts of virtue and order.

To enlighten them with mathematical and physical sciences, which advance the arts, and administer to the health, the subsistence, and comforts of human life.

And, generally, to form them to habits of reflection and correct action, rendering them examples of virtue to others, and of happiness within themselves.

These are the objects of that higher grade of education, the benefits and blessings of which the Legislature now proposes to provide for the good and ornament of their country: the gratification and happiness of their fellow citizens, of the parent especially, and his progeny on which all his affections are concentrated. 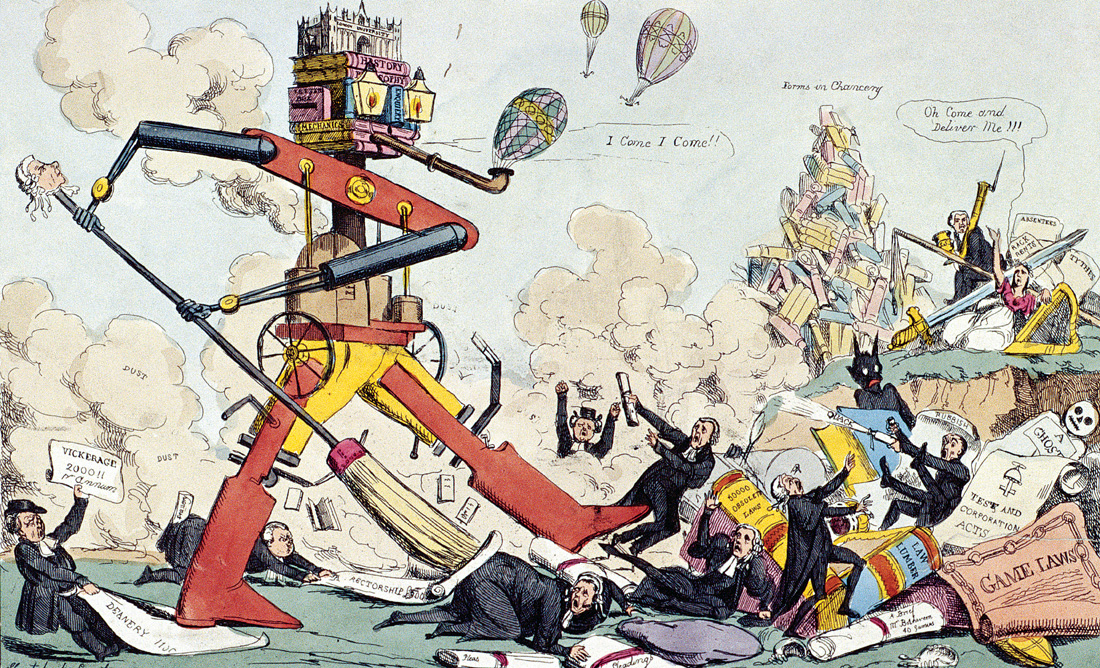 The March of Intellect, a juggernaut figure with London University on its head, sweeping away and kicking lawyers, vicars, and quack doctors, by Robert Seymour, c. 1828. © Guildhall Art Gallery, HIP, Art Resource, NY.

Education generates habits of application, of order, and the love of virtue, and controls, by the force of habit, any innate obliquities in our moral organization. We should be far too from the discouraging persuasion that man is fixed by the law of his nature at a given point—that his improvement is a chimera, and the hope delusive of rendering ourselves wiser, happier, or better than our forefathers were. As well might it be urged that the wild and uncultivated tree, hitherto yielding sour and bitter fruit only, can never be made to yield better; yet we know that the grafting art implants a new tree on the savage stock, producing what is most estimable both in kind and degree. Education, in like manner, engrafts a new man on the native stock, and improves what in his nature was vicious and perverse into qualities of virtue and social worth. And it cannot be but that each generation succeeding to the knowledge acquired by all those who preceded it, adding to it their own acquisitions and discoveries, and handing the mass down for successive and constant accumulation, must advance the knowledge and well-being of mankind: not infinitely, as some have said, but indefinitely, and to a term which no one can fix and foresee. Indeed, we need look back half a century, to times which many now living remember well, and see the wonderful advances in the sciences and arts which have been made within that period. Some of these have rendered the elements themselves subservient to the purposes of man, have harnessed them to the yoke of his labors, and effected the great blessings of moderating his own: of accomplishing what was beyond his feeble force, and extending the comforts of life to a much enlarged circle, to those who had before known its necessaries only. These are not the vain dreams of sanguine hope: we have before our eyes real and living examples. What but education has advanced us beyond the condition of our indigenous neighbors? And what chains them to their present state of barbarism and wretchedness, but a bigoted veneration for the supposed superlative wisdom of their fathers, and the preposterous idea that they are to look backward for better things, and not forward—longing, as it should seem, to return to the days of eating acorns and roots rather than indulge in the degeneracies of civilization? And how much more encouraging to the achievements of science and improvement is this than the desponding view that the condition of man cannot be ameliorated, that what has been must ever be, and that to secure ourselves where we are we must tread with awful reverence in the footsteps of our fathers. This doctrine is the genuine fruit of the alliance between church and state, the tenants of which, finding themselves but too well in their present condition, oppose all advances which might unmask their usurpations, and monopolies of honors, wealth, and power, and fear every change as endangering the comforts they now hold. Nor must we omit to mention among the benefits of education the incalculable advantage of training up able counselors to administer the affairs of our country in all its departments—legislative, executive, and judiciary—and to bear their proper share in the councils of our national government—nothing more than education advancing the prosperity, the power, and the happiness of a nation.

From Report of the Commissioners for the University of Virginia. As the university’s founder and developer of its curriculum, Jefferson envisioned the campus as an “academical village” and designed all of its neoclassical buildings. The university opened with eight professors in 1825; by the Civil War’s outbreak, it was second only to Harvard University in the size of its student body and faculty.