We went through the gap at 6 a.m. with anxious hearts as well as weary bodies. If the farther slope had proved impassable, our situation would have been almost desperate—but the worst was turning to the best for us. The twisted, wavelike rock formations of Husvik Harbor appeared right ahead in the opening of dawn. Without a word we shook hands with one another.

To our minds the journey was over, though as a matter of fact twelve miles of difficult country had still to be traversed. A gentle snow slope descended at our feet toward a valley that separated our ridge from the hills immediately behind Husvik, and as we stood gazing, Worsley said solemnly, “Boss, it looks too good to be true!” Down we went, to be checked presently by the sight of water 2,500 feet below. We could see the little wave ripples on the black beach, penguins strutting to and fro, and dark objects that looked like seals lolling lazily on the sand. This was an eastern arm of Fortuna Bay, separated by the ridge from the arm we had seen below us during the night. The slope we were traversing appeared to end in a precipice above this beach. But our revived spirits were not to be damped by difficulties on the last stage of the journey, and we camped cheerfully for breakfast. While Worsley and Crean were digging a hole for the lamp and starting the cooker, I climbed a ridge above us, cutting steps with the adze in order to secure an extended view of the country below. At 6:30 a.m. I thought I heard the sound of a steam whistle. I dared not be certain, but I knew that the men at the whaling station would be called from their beds about that time. Descending to the camp I told the others, and in intense excitement we watched the chronometer for 7:00, when the whalers would be summoned to work. Right to the minute the steam whistle came to us, borne clearly on the wind across the intervening miles of rock and snow. Never had any one of us heard sweeter music. It was the first sound created by outside human agency that had come to our ears since we left Stromness Bay in December 1914. That whistle told us that men were living near, that ships were ready, and that within a few hours we should be on our way back to Elephant Island to the rescue of the men waiting there under the watch and ward of Wild. It was a moment hard to describe. Pain and ache, boat journeys, marches, hunger, and fatigue seemed to belong to the limbo of forgotten things, and there remained only the perfect contentment that comes of work accomplished.

My examination of the country from a higher point had not provided definite information, and after descending I put the situation before Worsley and Crean. Our obvious course lay down a snow slope in the direction of Husvik. “Boys,” I said, “this snow slope seems to end in a precipice, but perhaps there is no precipice. If we don’t go down we shall have to make a detour of at least five miles before we reach level going. What shall it be?” They both replied at once. “Try the slope.” So we started away again downward. We abandoned the Primus lamp, now empty, at the breakfast camp and carried with us one ration and a biscuit each. The deepest snow we had yet encountered clogged our feet, but we plodded downward—and after descending about 500 feet, reducing our altitude to 2,000 feet above sea level, we thought we saw the way clear ahead.

When we picked ourselves up at the bottom we were not more than 1,500 feet above the sea. The slope was comparatively easy. Water was running beneath the snow, making “pockets” between the rocks that protruded above the white surface. The shells of snow over these pockets were traps for our feet, but we scrambled down and presently came to patches of tussock. A few minutes later we reached the sandy beach. The tracks of some animals were to be seen, and we were puzzled until I remembered that reindeer, brought from Norway, had been placed on the island and now ranged along the lower land of the eastern coast. We did not pause to investigate. Our minds were set upon reaching the haunts of man, and at our best speed we went along the beach to another rising ridge of tussock. Here we saw the first evidence of the proximity of man, whose work, as is so often the case, was one of destruction. A recently killed seal was lying there, and presently we saw several other bodies bearing the marks of bullet wounds.

At 1:30 p.m. we climbed round a final ridge and saw a little steamer, a whaling boat, entering the bay 2,500 feet below. A few moments later, as we hurried forward, the masts of a sailing ship lying at a wharf came in sight. Minute figures moving to and fro about the boats caught our gaze, and then we saw the sheds and factory of Stromness whaling station. We paused and shook hands, a form of mutual congratulation that had seemed necessary on four other occasions in the course of the expedition. The first time was when we landed on Elephant Island, the second when we reached South Georgia, and the third when we reached the ridge and saw the snow slope stretching below on the first day of the overland journey—then when we saw Husvik rocks.

Cautiously we started down the slope that led to warmth and comfort. The last lap of the journey proved extraordinarily difficult. Vainly we searched for a safe, or a reasonably safe, way down from the steep ice-clad mountainside. The sole possible pathway seemed to be a channel cut by water running from the upland. Down through icy water we followed the course of this stream. We were wet to the waist, shivering, cold, and tired. Presently our ears detected an unwelcome sound that might have been musical under other conditions. It was the splashing of a waterfall, and we were at the wrong end. When we reached the top of this fall we peered over cautiously and discovered that there was a drop of twenty-five or thirty feet, with impassable ice cliffs on both sides. To go up again was scarcely thinkable in our utterly wearied condition. The way down was through the waterfall itself. We made fast one end of our rope to a boulder with some difficulty, due to the fact that the rocks had been worn smooth by the running water. Then Worsley and I lowered Crean, who was the heaviest man. He disappeared altogether in the falling water and came out gasping at the bottom. I went next, sliding down the rope, and Worsley, who was the lightest and most nimble member of the party, came last. At the bottom of the fall we were able to stand again on dry land. The rope could not be recovered. We had flung down the adze from the top of the fall and also the logbook and the cooker wrapped in one of our blouses. That was all, except our wet clothes, that we brought out of the Antarctic, which we had entered a year and a half before with well-found ship, full equipment, and high hopes. That was all of tangible things, but in memories we were rich. We had pierced the veneer of outside things. We had “suffered, starved, and triumphed, grovelled down yet grasped at glory, grown bigger in the bigness of the whole.” We had seen God in his splendors, heard the text that Nature renders. We had reached the naked soul of men. 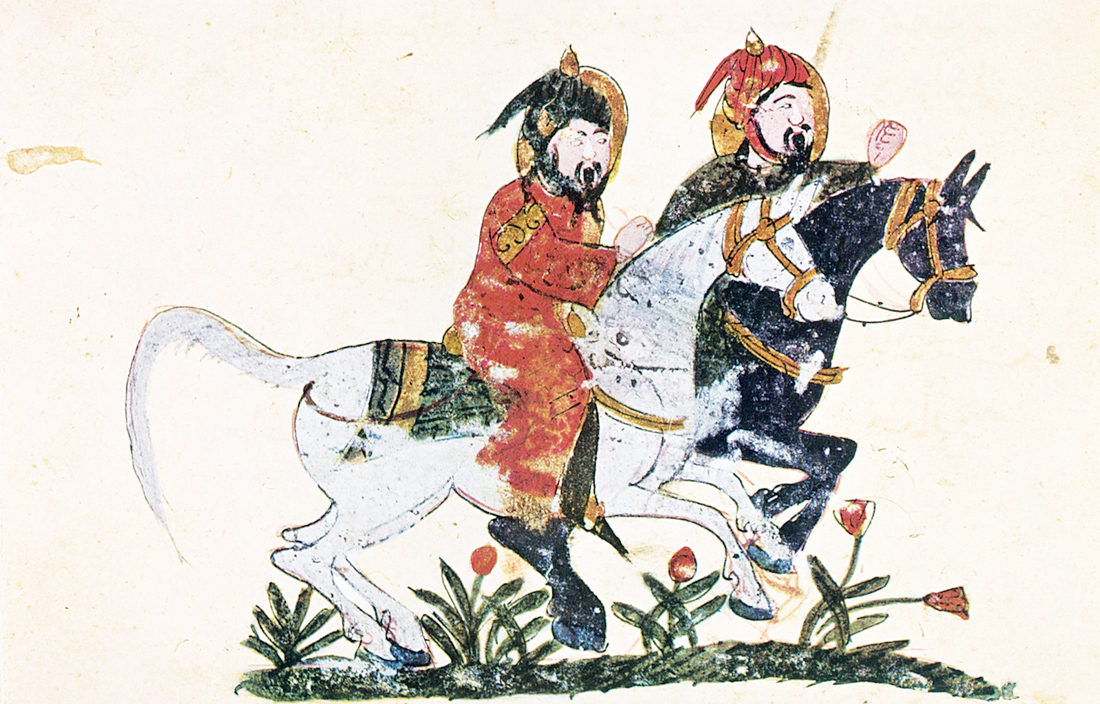 Shivering with cold, yet with hearts light and happy, we set off toward the whaling station, now not more than a mile and a half distant. The difficulties of the journey lay behind us. We tried to straighten ourselves up a bit, for the thought that there might be women at the station made us painfully conscious of our uncivilized appearance. Our beards were long and our hair was matted. We were unwashed and the garments that we had worn for nearly a year without a change were tattered and stained. Three more unpleasant-looking ruffians could hardly have been imagined. Worsley produced several safety pins from some corner of his garments and effected some temporary repairs that really emphasized his general disrepair. Down we hurried, and when quite close to the station we met two small boys ten or twelve years of age. I asked these lads where the manager’s house was situated. They did not answer. They gave us one look—a comprehensive look that did not need to be repeated. Then they ran from us as fast as their legs would carry them. We reached the outskirts of the station and passed through the “digesting house,” which was dark inside. Emerging at the other end, we met an old man who started as if he had seen the devil himself and gave us no time to ask any question. He hurried away. This greeting was not friendly. Then we came to the wharf, where the man in charge stuck to his station. I asked him if Mr. Sorlle (the manager) was in the house.

“We have lost our ship and come over the island,” I replied.

“You have come over the island?” he said in a tone of entire disbelief.

The man went toward the manager’s house and we followed him. I learned afterward that he said to Mr. Sorlle, “There are three funny-looking men outside who say they have come over the island and they know you. I have left them outside.” A very necessary precaution from his point of view.

Mr. Sorlle came out to the door and said, “Well?”

“I know your voice,” he replied doubtfully. “You’re the mate of the Daisy.”

“My name is Shackleton,” I said.

Immediately, he put out his hand and said, “Come in. Come in.”

“The war is not over.” he answered, “Millions are being killed. Europe is mad. The world is mad.”

From South: The “Endurance” Expedition. On his first journey to the South Pole in 1902, Shackleton came within four hundred miles of his goal; on his second in 1907, within ninety-seven miles. On his third expedition in 1914, his ship was crushed in ice, forcing him and part of his crew on an 800-mile journey in a whale boat to South Georgia Island and then a thirty-six-hour trek to Stromness. He died at the age of forty-seven in 1922 on his fourth unsuccessful expedition to the South Pole.