Business is the ordinary means of living for nearly all of us. And in what business is there not humbug? “There’s cheating in all trades but ours,” is the prompt reply from the bootmaker with his brown paper soles, the grocer with his floury sugar and chicoried coffee, the butcher with his mysterious sausages and queer veal, the dry-goods man with his “damaged goods wet at the great fire,” and his “selling at a ruinous loss,” the stockbroker with his brazen assurance that your company is bankrupt and your stock not worth a cent (if he wants to buy it), the horse jockey with his black arts and spavined brutes, the milkman with his tin aquaria, the land agent with his nice new maps and beautiful descriptions of distant scenery, the newspaper man with his “immense circulation,” the publisher with his “Great American Novel,” the city auctioneer with his “Pictures by the Old Masters”—all and everyone protest each his own innocence, and warn you against the deceits of the rest.

My inexperienced friend, take it for granted that they all tell the truth—about each other!—and then transact your business to the best of your ability on your own judgment. Never fear but that you will get experience enough, and that you will pay well for it too; and toward the time when you shall no longer need earthly goods, you will begin to know how to buy.

Literature is one of the most interesting and significant expressions of humanity. Yet books are thickly peppered with humbug. “Travelers’ stories” have been the scoff of ages, from the “True Story” of witty old Lucian the Syrian down to the gorillarities—if I may coin a word—of the Frenchman Du Chaillu. Ireland’s counterfeited Shakespeare plays, Chatterton’s forged manuscripts, George Psalmanazar’s forged Formosan language, Joe Smith’s Mormon Bible (it should be noted that this and the Qur’an sounded two strings of humbug together—the literary and the religious), the more recent counterfeits of the notorious Greek Simonides—such literary humbugs as these are equal in presumption and in ingenuity too, to any of a merely business kind, though usually destitute of that sort of impiety which makes the great religious humbugs horrible as well as impudent.

Cheating is more honorable than stealing.

Science is another important field of human effort. Science is the pursuit of pure truth, and the systematizing of it. In such an employment as that, one might reasonably hope to find all things done in honesty and sincerity. Not at all, my ardent and inquiring friends, there is a scientific humbug just as large as any other. We have all heard of the Moon Hoax. Do none of you remember the Hydrarchos sillimannii, that awful Alabama snake? It was only a little while ago that a grave account appeared in a newspaper of a whole new business of compressing ice. Perpetual motion has been the dream of scientific visionaries, and a pretended but cheating realization of it has been exhibited by scamp after scamp. I understand that one is at this moment being invented over in Jersey City. I have purchased more than one “perpetual motion” myself. Many persons will remember Mr. Paine—“The Great Shot-at” as he was called, from his story that people were constantly trying to kill him—and his water gas. There have been other water gases too, which were each going to show us how to set the North River on fire, but something or other has always broken down just at the wrong moment. Nobody seems to reflect, when these water gases come up, that if water could really be made to burn, the right conditions would surely have happened at some one of the thousands of city fires, and that the very stuff with which our stout firemen were extinguishing the flames would have itself caught and exterminated the whole brave, wet crowd!

Medicine is the means by which we poor, feeble creatures try to keep from dying or aching. In a world so full of pain it would seem as if people could not be so foolish, or practitioners so knavish, as to sport with men’s and women’s and children’s lives by their professional humbugs. Yet there are many grave MDs who, if there is nobody to hear, and if they speak their minds, will tell you plainly that the whole practice of medicine is in one sense a humbug. One of its features is certainly a humbug, though so innocent and even useful that it seems difficult to think of any objection to it. This is the practice of giving a placebo—that is, a bread pill or a dose of colored water, to keep the patient’s mind easy while imagination helps nature to perfect a cure. As for the quacks, patent medicines, and universal remedies, I need only mention their names. Prince Hohenlohe, Valentine Greatrakes, John St. John Long, Doctor Graham and his wonderful bed, Mesmer and his tub, Perkins’ metallic tractors—these are half a dozen. Modern history knows of hundreds of such. 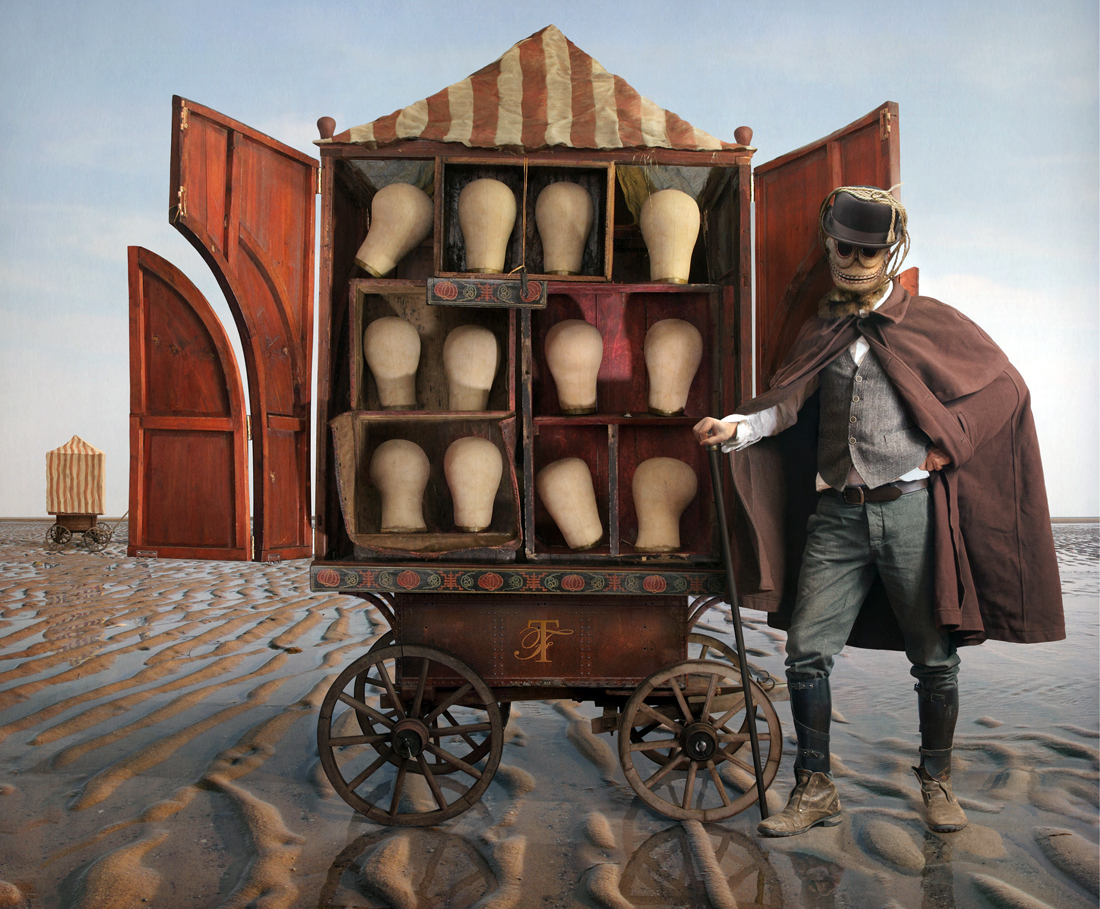 The Face Behind the Face, from the series Truppe Fledermaus, by Kahn & Selesnick, 2014. Courtesy the artists and Yancey Richardson Gallery, New York.

It would almost seem as if human delusions became more unreasoning and abject in proportion as their subject is of greater importance. A machine, a story, an animal skeleton, are not so very important. But the humbugs which have prevailed about that wondrous machine, the human body, its ailments and its cures, about the unspeakable mystery of human life, and still more about the far greater and more awful mysteries of the life beyond the grave, and the endless happiness and misery believed to exist there, the humbugs about these have been infinitely more absurd, more shocking, more unreasonable, more inhuman, more destructive.

I can only allude to whole sciences (falsely so called), that are unmingled humbugs from beginning to end. Such was alchemy, such was magic, such was and still is astrology, and above all, fortune-telling.

But there is a more thorough humbug than any of these enterprises or systems. The greatest humbug of all is the man who believes—or pretends to believe—that everything and everybody are humbugs. We sometimes meet a person who professes that there is no virtue; that every man has his price, and every woman hers; that any statement from anybody is just as likely to be false as true, and that the only way to decide which is to consider whether truth or a lie was likely to have paid best in that particular case. Religion he thinks one of the smartest business dodges extant, a first-rate investment, and by all odds the most respectable disguise that a lying or swindling businessman can wear. Honor he thinks is a sham. Honesty he considers a plausible word to flourish in the eyes of the greener portion of our race, as you would hold out a cabbage leaf to coax a donkey. What people want, he thinks, or says he thinks, is something good to eat, something good to drink, fine clothes, luxury, laziness, wealth. If you can imagine a hog’s mind in a man’s body—sensual, greedy, selfish, cruel, cunning, sly, coarse, yet stupid, shortsighted, unreasoning, unable to comprehend anything except what concerns the flesh, you have your man. He thinks himself philosophic and practical, a man of the world; he thinks to show knowledge and wisdom, penetration, deep acquaintance with men and things. Poor fellow! he has exposed his own nakedness. Instead of showing that others are rotten inside, he has proved that he is. He claims that it is not safe to believe others—it is perfectly safe to disbelieve him. He claims that every man will get the better of you if possible—let him alone! Selfishness, he says, is the universal rule—leave nothing to depend on his generosity or honor; trust him just as far as you can sling an elephant by the tail. A bad world, he sneers, full of deceit and nastiness—it is his own foul breath that he smells; only a thoroughly corrupt heart could suggest such vile thoughts. He sees only what suits him, as a turkey buzzard spies only carrion, though amid the loveliest landscape. I pronounce him who thus virtually slanders his father and dishonors his mother, and defiles the sanctities of home, and the glory of patriotism, and the merchant’s honor, and the martyr’s grave, and the saint’s crown—who does not even know that every sham shows that there is a reality, and that hypocrisy is the homage that vice pays to virtue—I pronounce him—no, I do not pronounce him a humbug, the word does not apply to him. He is a fool.

From Humbugs of the World. At the age of twenty-five in 1835, Barnum purchased a slave named Joice Heth, whom he advertised for exhibition as the 161-year-old former nurse of George Washington. On and off between 1842 and 1868, he operated the American Museum, attracting at least thirty-eight million visitors to his various marvels, among them the twenty-five-inch-tall General Tom Thumb and the original “Siamese twins” Chang and Eng. In 1874 Barnum upgraded his “Great Traveling World’s Fair” from two to three rings.

“Then to the piano, and pound away.”More