Commodus, from his earliest infancy, discovered an aversion to whatever was rational or liberal, and a fond attachment to the amusements of the populace: the sports of the circus and amphitheater, the combats of gladiators, and the hunting of wild beasts. The masters in every branch of learning, whom his father Marcus Aurelius provided for his son, were heard with inattention and disgust, while the Moors and Parthians, who taught him to dart the javelin and to shoot with the bow, found a disciple who delighted in his application, and soon equalled the most skillful of his instructors, in the steadiness of the eye and the dexterity of the hand.

The servile crowd, whose fortune depended on their master’s vices, applauded these ignoble pursuits. The perfidious voice of flattery reminded him that by exploits of the same nature, by the defeat of the Nemaean lion and the slaughter of the wild boar of Erymanthus, the Grecian Hercules had acquired a place among the gods and an immortal memory among men. They only forgot to observe that in the first ages of society, when the fiercer animals often dispute with man the possession of an unsettled country, a successful war against those savages is one of the most innocent and beneficial labors of heroism. In the civilized state of the Roman empire, the wild beasts had long since retired from the face of man, and the neighborhood of populous cities. To surprise them in their solitary haunts and to transport them to Rome—that they might be slain in pomp by the hand of an emperor—was an enterprise equally ridiculous for the prince, and oppressive for the people. Ignorant of these distinctions, Commodus eagerly embraced the glorious resemblance and styled himself (as we still read on his medals) the Roman Hercules. The club and the lion’s hide were placed by the side of the throne, amongst the ensigns of sovereignty, and statues were erected in which Commodus was represented in the character and with the attributes of the god, whose valor and dexterity he endeavored to emulate in the daily course of his ferocious amusements.

Elated with these praises, which gradually extinguished the innate sense of shame, Commodus resolved to exhibit before the eyes of the Roman people those exercises, which till then he had decently confined within the walls of his palace and to the presence of a few favorites. On the appointed day, the various motives of flattery, fear, and curiosity attracted to the amphitheater an innumerable multitude of spectators—and some degree of applause was deservedly bestowed on the uncommon skill of the imperial performer. Whether he aimed at the head or heart of the animal, the wound was alike certain and mortal. With arrows, whose point was shaped into the form of a crescent, Commodus often intercepted the rapid career and cut asunder the long, bony neck of the ostrich. A panther was let loose, and the archer waited till he had leaped upon a trembling malefactor. In the same instant the shaft flew, the beast dropped dead, and the man remained unhurt. The dens of the amphitheater disgorged at once a hundred lions—a hundred darts from the unerring hand of Commodus laid them dead as they ran raging round the arena. Neither the huge bulk of the elephant nor the scaly hide of the rhinoceros could defend them from his stroke. Ethiopia and India yielded their most extraordinary productions, and several animals were slain in the amphitheater, which had been seen only in the representations of art, or perhaps of fancy. (Commodus killed a Camelopardalis, or giraffe, the tallest, the most gentle, and the most useless of the large quadrupeds. This singular animal, a native only of the interior parts of Africa, has not been seen in Europe since the revival of letters.) In all these exhibitions, the securest precautions were used to protect the person of the Roman Hercules from the desperate spring of any savage, who might possibly disregard the dignity of the emperor and the sanctity of the god. 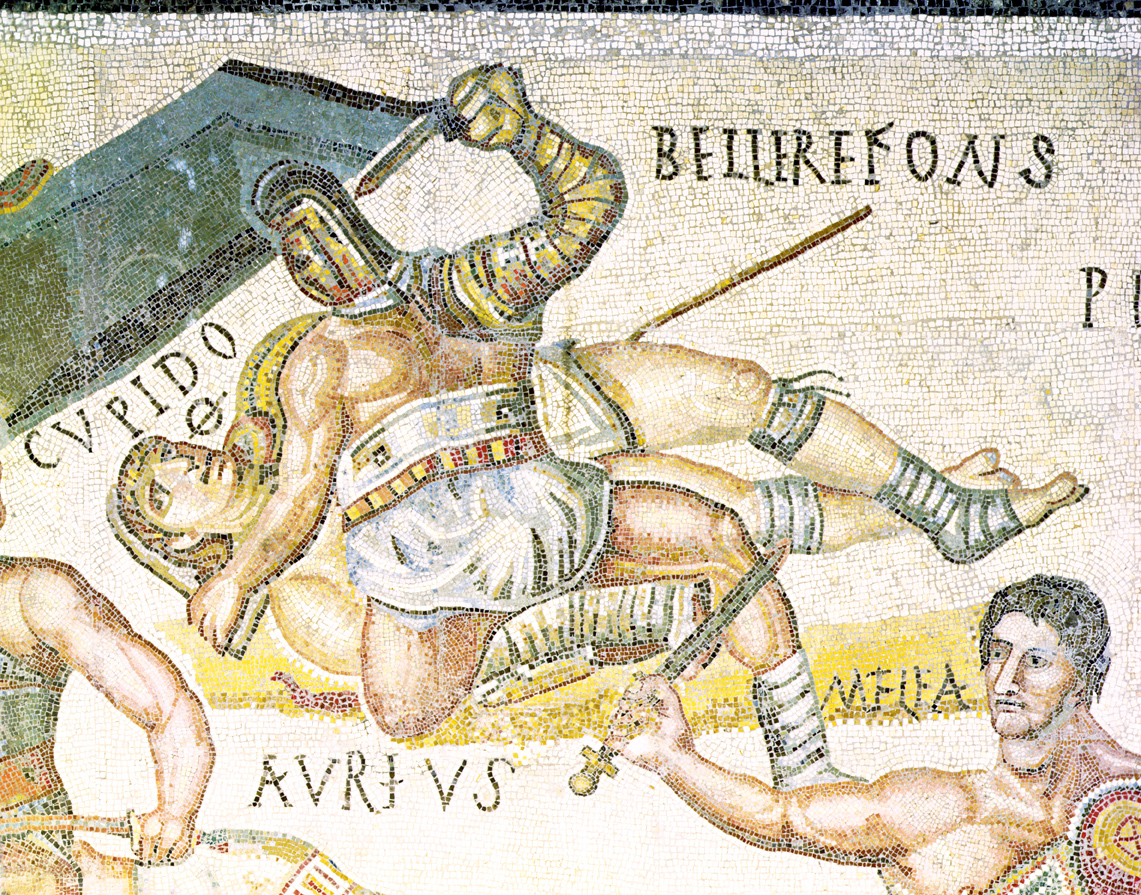 But the meanest of the populace were affected with shame and indignation when they beheld their sovereign enter the lists as a gladiator and glory in a profession which the laws and manners of the Romans had branded with the justest note of infamy. He chose the habit and arms of the secutor [pursuer], whose combat with the retiarius [net man] formed one of the most lively scenes in the bloody sports of the amphitheater. The secutor was armed with a helmet, sword, and buckler; his naked antagonist had only a large net and a trident; with the one he endeavored to entangle, with the other to dispatch, his enemy. If he missed the first throw, he was obliged to fly from the pursuit of the secutor till he had prepared his net for a second cast. The emperor fought in this character 735 several times. These glorious achievements were carefully recorded in the public acts of the empire, and that he might omit no circumstance of infamy, he received from the common fund of gladiators a stipend so exorbitant that it became a new and most ignominious tax upon the Roman people. It may be easily supposed that in these engagements the master of the world was always successful. In the amphitheater his victories were not often sanguinary, but when he exercised his skill in the school of gladiators, or his own palace, his wretched antagonists were frequently honored with a mortal wound from the hand of Commodus and obliged to seal their flattery with their blood.

From The History of the Decline and Fall of the Roman Empire. While in Rome in 1764, among “barefooted friars” singing “in the temple of Jupiter,” Gibbon at the age of twenty-six received the inspiration to write his famous work. The historian published the first volume in February 1776, five months before the American Revolution, and published the final three volumes in May 1788, one year before the French Revolution.

Virgil on the relentless efforts of early man.More