Chief of Staff H.R. Haldeman: You could blackmail [Lyndon] Johnson on this stuff, and it might be worth doing.

Haldeman: The bombing halt stuff is all in the same file. Or in some of the same hands.

Secretary of State Henry Kissinger: We have nothing here.

Nixon: Damn it, I asked for that, because I need it.

Kissinger: Yeah, but Bob and I have been trying to put the damn thing together for three years.

Haldeman: We have a basic history of it—constructed on our own—but there is a file on it.

Haldeman: [Tom] Huston swears to God there’s a file on it at Brookings.

Kissinger: I wouldn’t be surprised.

Kissinger: Couldn’t we go over? Now, Brookings has no right to have classified documents.

Nixon: I mean, I want it implemented on a thievery basis. Goddamn it, get in and get those files. Blow the safe and get it.

Haldeman: They may very well have cleaned them by now, with this thing getting to—

Kissinger: No, I wouldn’t be surprised if Brookings had the file on the bombing halt.

Haldeman: My point is, Johnson knows that those files are around. He doesn’t know for sure that we don’t have them.

After winning one the largest landslide victories in the history of American presidential elections in 1972, Nixon resigned from the presidency on August 9, 1974, facing the prospect of impeachment for his role in the Watergate scandal. A controversial and polarizing figure, he was a key player in American politics for decades, having served as a congressman, member of the House Un-American Activities Committee, senator, and vice president for President Dwight D. Eisenhower from 1953 to 1961 prior to his presidency. Among his most significant achievements in office was the normalization of relations between the United States and China after over twenty years of estrangement. 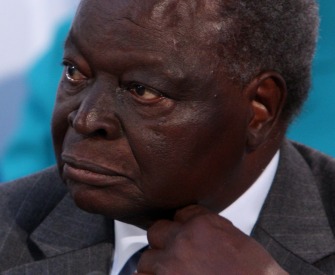 Jeffrey Gettleman on the 2007 Kenyan election crisis, and why in Kenya all politics is tribal. More

To market, to market. More