Days, weeks passed, and under easy sail, the ivory Pequod had slowly swept across four several cruising grounds: that off the Azores; off the Cape de Verdes; on the Plate (so-called), being off the mouth of the Rio de la Plata; and the Carrol Ground, an unstaked, watery locality, southerly from St. Helena.

It was while gliding through these latter waters that one serene and moonlight night, when all the waves rolled by like scrolls of silver—and, by their soft, suffusing seethings, made what seemed a silvery silence, not a solitude—on such a silent night a silvery jet was seen far in advance of the white bubbles at the bow. Lit up by the moon, it looked celestial; seemed some plumed and glittering god uprising from the sea. Fedallah first descried this jet. For of these moonlight nights, it was his wont to mount to the mainmast head and stand a lookout there, with the same precision as if it had been day. And yet, though herds of whales were seen by night, not one whaleman in a hundred would venture a lowering for them. You may think with what emotions, then, the seamen beheld this old Oriental perched aloft at such unusual hours; his turban and the moon, companions in one sky. But when, after spending his uniform interval there for several successive nights without uttering a single sound; when, after all this silence, his unearthly voice was heard announcing that silvery, moonlit jet, every reclining mariner started to his feet as if some winged spirit had lighted in the rigging and hailed the mortal crew. “There she blows!” Had the trump of judgment blown, they could not have quivered more, yet still they felt no terror—rather pleasure. For though it was a most unwonted hour, yet so impressive was the cry, and so deliriously exciting, that almost every soul on board instinctively desired a lowering.

Walking the deck with quick, side-lunging strides, Ahab commanded the topgallant sails and royals to be set, and every stunsail spread. The best man in the ship must take the helm. Then, with every masthead manned, the piled-up craft rolled down before the wind. The strange, upheaving, lifting tendency of the taffrail breeze filling the hollows of so many sails, made the buoyant, hovering deck to feel like air beneath the feet; while still she rushed along, as if two antagonistic influences were struggling in her—one to mount direct to heaven, the other to drive yawningly to some horizontal goal. And had you watched Ahab’s face that night, you would have thought that in him also two different things were warring. While his one live leg made lively echoes along the deck, every stroke of his dead limb sounded like a coffin tap. On life and death this old man walked. But though the ship so swiftly sped, and though from every eye, like arrows, the eager glances shot, yet the silvery jet was no more seen that night. Every sailor swore he saw it once, but not a second time.

This midnight spout had almost grown a forgotten thing, when, some days after, lo! At the same silent hour, it was again announced: again it was descried by all; but upon making sail to overtake it, once more it disappeared as if it had never been. And so it served us night after night, till no one heeded it but to wonder at it. Mysteriously jetted into the clear moonlight, or starlight, as the case might be; disappearing again for one whole day or two days or three; and somehow seeming at every distinct repetition to be advancing still farther and farther in our van, this solitary jet seemed forever alluring us on. 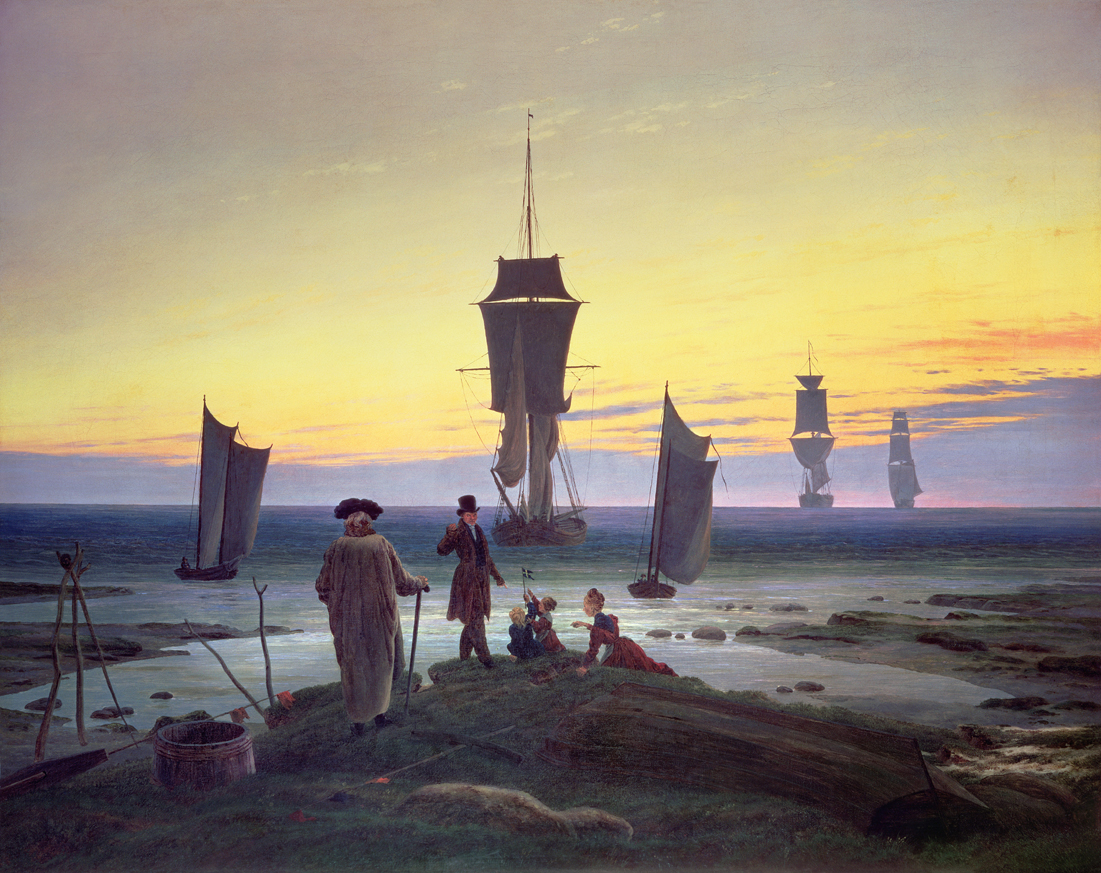 Nor with the immemorial superstition of their race, and in accordance with the preternaturalness, as it seemed, which in many things invested the Pequod, were there wanting some of the seamen who swore that whenever and wherever descried; at however remote times, or in however far apart latitudes and longitudes, that unnearable spout was cast by one selfsame whale; and that whale, Moby Dick. For a time, there reigned, too, a sense of peculiar dread at this flitting apparition, as if it were treacherously beckoning us on and on, in order that the monster might turn round upon us, and rend us at last in the remotest and most savage seas.

These temporary apprehensions, so vague but so awful, derived a wondrous potency from the contrasting serenity of the weather, in which, beneath all its blue blandness, some thought there lurked a devilish charm, as for days and days we voyaged along, through seas so wearily, lonesomely mild, that all space, in repugnance to our vengeful errand, seemed vacating itself of life before our urnlike prow.

But, at last, when turning to the eastward, the cape winds began howling around us, and we rose and fell upon the long, troubled seas that are there; when the ivory-tusked Pequod sharply bowed to the blast and gored the dark waves in her madness, till, like showers of silver chips, the foam flakes flew over her bulwarks; then all this desolate vacuity of life went away, but gave place to sights more dismal than before.

Close to our bows, strange forms in the water darted hither and thither before us, while thick in our rear flew the inscrutable sea ravens. And every morning, perched on our stays, rows of these birds were seen; and, in spite of our hootings, for a long time obstinately clung to the hemp as though they deemed our ship some drifting, uninhabited craft; a thing appointed to desolation, and therefore fit roosting place for their homeless selves. And heaved and heaved, still unrestingly heaved the black sea, as if its vast tides were a conscience, and the great mundane soul were in anguish and remorse for the long sin and suffering it had bred.

Cape of Good Hope, do they call ye? Rather Cape Tormentoto, as called of yore; for long allured by the perfidious silence that before had attended us, we found ourselves launched into this tormented sea, where guilty beings transformed into those fowls and these fish, seemed condemned to swim on everlastingly without any haven in store, or beat that black air without any horizon. But calm, snow-white, and unvarying; still directing its fountain of feathers to the sky; still beckoning us on from before, the solitary jet would at times be descried.

During all this blackness of the elements, Ahab, though assuming for the time the almost continual command of the drenched and dangerous deck, manifested the gloomiest reserve; and more seldom than ever addressed his mates. In tempestuous times like these, after everything above and aloft has been secured, nothing more can be done but passively to await the issue of the gale. Then captain and crew become practical fatalists. So, with his ivory leg inserted into its accustomed hole, and with one hand firmly grasping a shroud, Ahab for hours and hours would stand gazing dead to windward, while an occasional squall of sleet or snow would all but congeal his very eyelashes together. Meantime, the crew, driven from the forward part of the ship by the perilous seas that burstingly broke over its bows, stood in a line along the bulwarks in the waist; and the better to guard against the leaping waves, each man had slipped himself into a sort of bowline secured to the rail, in which he swung as in a loosened belt. Few or no words were spoken, and the silent ship, as if manned by painted sailors in wax, day after day tore on through all the swift madness and gladness of the demoniac waves. By night the same muteness of humanity before the shrieks of the ocean prevailed; still in silence the men swung in the bowlines; still wordless Ahab stood up to the blast. Even when wearied nature seemed demanding repose he would not seek that repose in his hammock. Never could Starbuck forget the old man’s aspect, when one night going down into the cabin to mark how the barometer stood, he saw him with closed eyes sitting straight in his floor-screwed chair; the rain and half-melted sleet of the storm from which he had some time before emerged still slowly dripping from the unremoved hat and coat. On the table beside him lay unrolled a chart of tides and currents. His lantern swung from his tightly clenched hand. Though the body was erect, the head was thrown back so that the closed eyes were pointed toward the needle of the telltale that swung from a beam in the ceiling.

Terrible old man! thought Starbuck with a shudder, sleeping in this gale, still thou steadfastly eyest thy purpose.

From Moby Dick. After writing two successful adventure novels, Typee and Omoo, based on his experiences as a sailor, Melville published the more allegorical Mardi in 1849; it did not sell well. In 1850, he became friends with Nathaniel Hawthorne, to whom he dedicated Moby Dick, published the following year. For the details of a sperm whale attacking a ship, Melville drew upon an account of the sinking of the Essex in 1820 written by its first mate, Owen Chase. When Melville died at the age of seventy-two in 1891, one obituary noted that “even his own generation has long thought him dead.”