The world is a sea in many respects and assimilations. It is a sea as it is subject to storms and tempests; every man (and every man is a world) feels that. And then it is never the shallower for the calmness; the sea is as deep, there is as much water in the sea in a calm as in a storm; we may be drowned in a calm, and flattering fortune in prosperity, as irrecoverably as in a wrought sea in adversity—so the world is a sea. It is a sea as it is bottomless to any line which we can sound it with, and endless to any discovery that we can make of it.

The purposes of the world, the ways of the world, exceed our consideration, yet we are sure the sea hath a bottom, and sure that it hath limits that it cannot overpass; the power of the greatest in the world, the life of the happiest in the world, cannot exceed those bounds which God hath placed for them—so the world is a sea. It is a sea as it hath ebbs and floods, and no man knows the true reason of those floods and those ebbs. All men have changes and vicissitudes in their bodies (they fall sick) and in their estates (they grow poor) and in their minds (they become sad), at which changes (sickness, poverty, sadness) themselves wonder; and the cause is wrapped up in the purpose and judgment of God only, and hid even from them that have them—and so the world is a sea. It is a sea as the sea affords water enough for all the world to drink, but such water as will not quench the thirst. The world affords conveniences enough to satisfy nature, but these increase our thirst with drinking, and our desire grows and enlarges itself with our abundance; and though we sail in a full sea, yet we lack water—so the world is a sea. It is a sea if we consider the inhabitants. In the sea the greater fish devour the less, and so do the men of this world, too. And as fish, when they mud themselves, have no hands to make themselves clean but the current of the waters must work that, so have the men of this world no means to cleanse themselves from those sins which they have contracted in the world, of themselves, till a new flood, waters of repentance, drawn up, and sanctified by the Holy Ghost, work that blessed effect in them.

All these ways the world is a sea, but especially it is a sea in this respect: the sea is no place of habitation but a passage to our habitations. So the apostle expresses the world, Here we have no continuing city, but we seek one to come; we seek it not here, but we seek it while we are here, else we shall never find it. Those are the two great works which we are to do in this world: first to know that this world is not our home, and then to provide us another home while we are in this world. 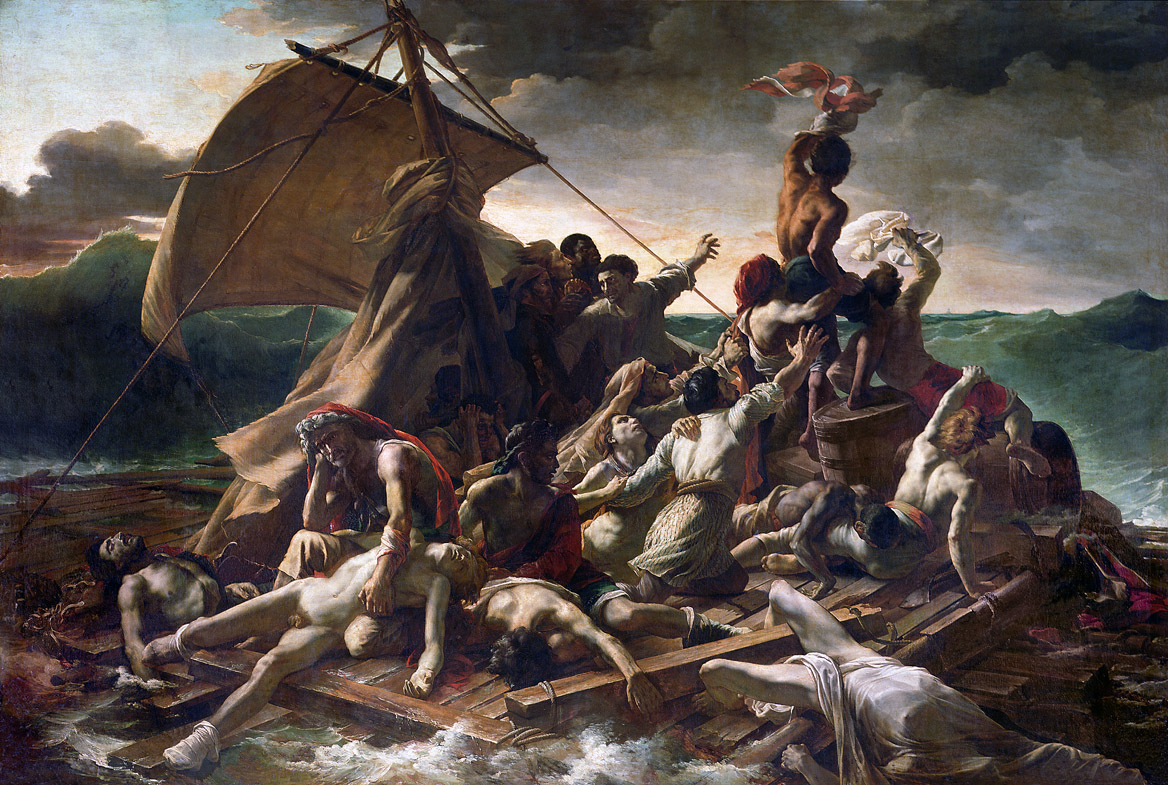 The Raft of the Medusa, by Théodore Géricault, 1819. Louvre, Paris, France.

Now, in this sea every ship that sails must necessarily have some part of the ship underwater; every man that lives in this world must necessarily have some of his life, some of his thoughts, some of his labors spent upon this world; but that part of the ship by which he sails is above water; those meditations and those endeavors which must bring us to heaven are removed from this world, and fixed entirely upon God. And in this sea, are we made fishers of men—of men in general, not of rich men, to profit by them, nor of poor men, to pierce them the more sharply, because affliction hath opened a way into them; not of learned men, to be overglad of their approbation of our labors, nor of ignorant men, to affect them with an astonishment or admiration of our gifts: but we are fishers of men, of all men, of that which makes them men, their souls. And for this fishing in this sea, this gospel is our net.

From “Sermon Seventy-One.” Having sailed under the command of the earl of Essex to attack Cadiz in 1596, Donne the following year set off on another voyage against the Spanish. En route his ship met a terrific storm, where “the south and west winds joined, and, as they blew,/Waves like a rolling trench before them threw” and “Some coffined in their cabins lie, equally/Grieved that they are not dead, and yet must die.” He survived and was ordained as an Anglican priest in 1615, becoming a favorite preacher of King James I and, later, Charles I.

John Locke on the right to bear farms.More