Marriage being the destination appointed by society for women, the prospect they are brought up to, and the object which it is intended should be sought by all of them, except those who are too little attractive to be chosen by any man as his companion, one might have supposed that everything would have been done to make this condition as eligible to them as possible, that they might have no cause to regret being denied the option of any other.

Society, however, both in this and, at first, in all other cases, has preferred to attain its object by foul rather than fair means; but this is the only case in which it has substantially persisted in them even to the present day. Originally, women were taken by force, or regularly sold by their father to the husband. Until a late period in European history, the father had the power to dispose of his daughter in marriage at his own will and pleasure, without any regard to hers. The church, indeed, was so far faithful to a better morality as to require a formal “yes” from the woman at the marriage ceremony; but there was nothing to show that the consent was other than compulsory; and it was practically impossible for the girl to refuse compliance if the father persevered, except perhaps when she might obtain the protection of religion by a determined resolution to take monastic vows. After marriage, the man had anciently (but this was anterior to Christianity) the power of life and death over his wife. She could invoke no law against him; he was her sole tribunal and law. For a long time he could repudiate her, but she had no corresponding power in regard to him. By the old laws of England, the husband was called the lord of the wife; he was literally regarded as her sovereign, inasmuch that the murder of a man by his wife was called treason (petty as distinguished from high treason), and was more cruelly avenged than was usually the case with high treason, for the penalty was burning to death. Because these various enormities have fallen into disuse, men suppose that all is now as it should be in regard to the marriage contract; and we are continually told that civilization and Christianity have restored to the women her just rights. The wife’s position under the common law of England is worse than that of slaves in the laws of many countries; by the Roman law, for example, a slave might have his peculium, which to a certain extent the law guaranteed to him for his exclusive use. By means of settlements, the rich usually contrive to withdraw the whole or part of the inherited property of the wife from the absolute control of the husband; but they do not succeed in keeping it under her own control; the utmost they can do only prevents the husband from squandering it, at the same time debarring the rightful owner from its use. The property itself is out of the reach of both; and as to the income derived from it, the form of settlement most favorable to the wife (that called “to her separate use”) only precludes the husband from receiving it instead of her; it must pass through her hands, but if he takes it from her by personal violence as soon as she receives it, he can neither be punished nor compelled to restitution. This is the amount of the protection which, under the laws of this country, the most powerful nobleman can give his own daughter as respects her husband. 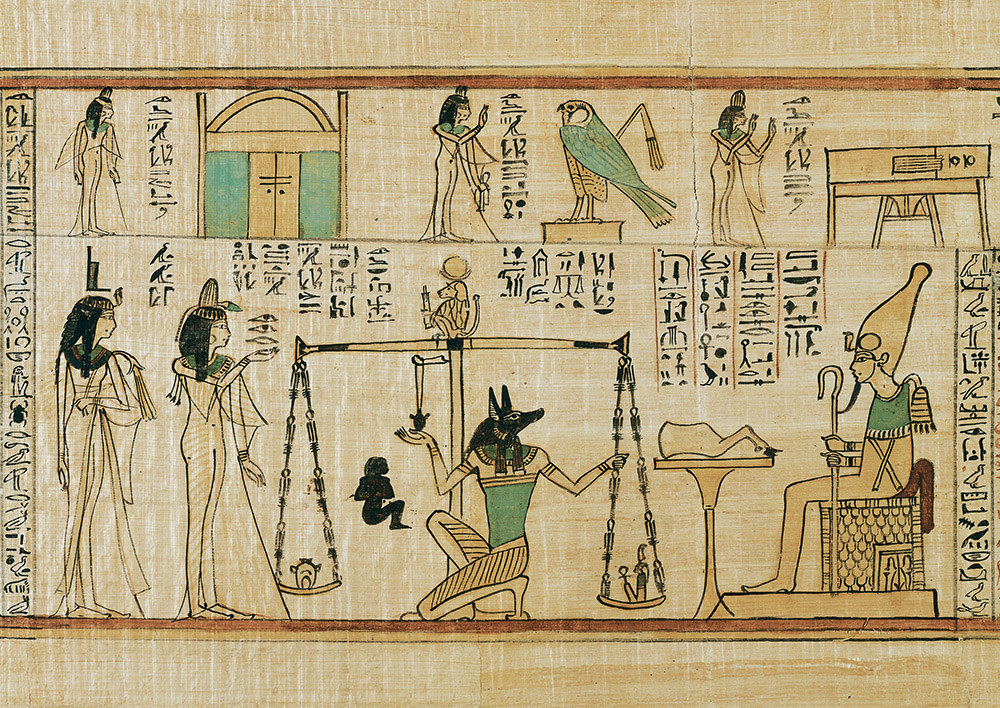 Detail of the papyrus scroll Book of the Dead for the Singer of Amun, Nany, Egypt, c. 1050 BC. The Metropolitan Museum of Art, Rogers Fund, 1930.

In the immense majority of cases, there is no settlement; and the absorption of all rights, all property, as well as all freedom of action, is complete. The two are called “one person in law,” for the purpose of inferring that whatever is hers is his, but the parallel inference is never drawn that whatever is his is hers; the maxim is not applied against the man, except to make him responsible to third parties for her acts, as a master is for the acts of his slaves or of his cattle. I am far from pretending that wives are in general no better treated than slaves; but no slave is a slave to the same lengths, and in so full a sense of the word, as a wife is.

Hardly any slave, except one immediately attached to the master’s person, is a slave at all hours and all minutes; in general, he has, like a soldier, his fixed task, and when it is done, or when he is off duty, he disposes, within certain limits, of his own time, and has a family life into which the master rarely intrudes. While she is held in this worst description of slavery as to her own person, what is her position in regard to the children in whom she and her master have a joint interest? They are by law his children. He alone has any legal rights over them. Not one act can she do toward or in relation to them, except by delegation from him. Even after he is dead, she is not their legal guardian unless he by will has made her so. He could even send them away from her and deprive her of the means of seeing or corresponding with them. This is her legal state. And from this state, she has no means of withdrawing herself. If she leaves her husband, she can take nothing with her, neither her children nor anything which is rightfully her own. If he chooses, he can compel her to return, by law, or by physical force; or he may content himself with seizing for his use anything which she may earn, or which may be given to her by her relations. It is only legal separation by a decree of a court of justice which entitles her to live apart without being forced back into the custody of an exasperated jailer—or which empowers her to apply any earnings to her own use without fear that a man whom perhaps she has not seen for twenty years will pounce upon her some day and carry all off.

Curse on all laws but those which love has made.

This legal separation, until lately, the courts of justice would only give at an expense which made it inaccessible to anyone out of the higher ranks. Even now it is only given in cases of desertion, or of the extreme of cruelty; and yet complaints are made every day that it is granted too easily. Surely, if a woman is denied any lot in life but that of being the personal body servant of a despot, and is dependent for everything upon the chance of finding one who may be disposed to make a favorite of her instead of merely a drudge, it is a very cruel aggravation of her fate that she should be allowed to try this chance only once. The natural sequel and corollary from this state of things would be that, since her all in life depends upon obtaining a good master, she should be allowed to change again and again until she finds one.

From The Subjection of Women. In 1821, when Mill was fifteen, his historian father arranged for him to study with John Austin, a theorist of legal positivism, but by seventeen Mill had abandoned legal studies for a career in the East India Company that would span more than thirty years. Mill won a local seat in Parliament in 1865, though he refused to canvass for himself or pander to the local businesses, and in 1867 helped found the first women’s suffrage society in England.